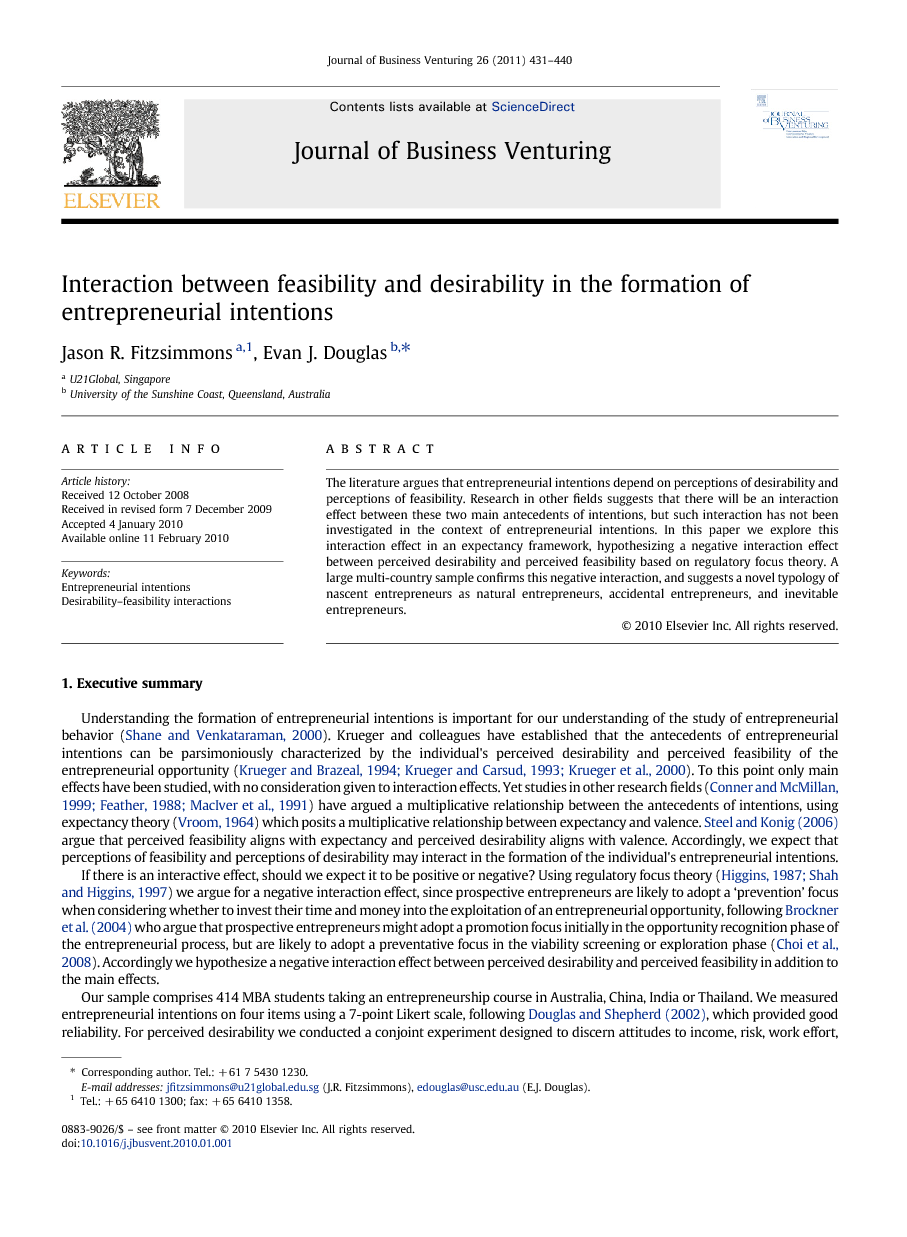 In this study we make four main contributions to the literature. First, we argue the case for a negative interaction effect between perceptions of feasibility and perceptions of desirability in the formation of entrepreneurial intentions using an expectancy-value approach (Vroom, 1964) and by incorporating regulatory focus theory (Higgins, 1987, Higgins, 1998 and Shah and Higgins, 1997). Second, we introduce a more parsimonious measure of perceived desirability — we argue that the individual's attitude to majority ownership of the firm in which he/she works is a sufficient proxy for the perceived desirability of entrepreneurial action and more effectively captures the differences between entrepreneurship and employment. Third, we demonstrate that entrepreneurial intentions may be high even when one of the two main determinants, perceived desirability and perceived feasibility, are relatively low. Lastly, on the basis of our findings we propose a categorization of entrepreneurial types (natural, accidental and inevitable, based on their combinations of perceived feasibility and perceived desirability) which might prove useful in studies where it is convenient to classify types of entrepreneurs in the investigation of other aspects of the entrepreneurship process or entrepreneurial behavior. There are nonetheless several important limitations to this study. The first concerns generalizability — these results may not be generalizable to the wider populations of Australia, China, Thailand and India, nor to other populations, since our sample was better educated and on average younger than the general populations. We note that neither education nor age was a significant determinant of entrepreneurial intentions in the final model, and that the country dummies were also not significant. A related issue is the use of students as subjects, which has been criticized by some (Copeland et al., 1973 and Robinson et al., 1991) but others have argued that graduate business students are sufficient proxies for business executives in some contexts (Khera and Benson, 1970) including the entrepreneurial context (Gaglio and Katz, 2001 and Shepherd and DeTienne, 2005). Our sample was of students who were taking an entrepreneurship course and as such, we can argue that our sample more likely represents people with a strong interest in becoming an entrepreneur than would samples of non-business students or business students enrolled in non-entrepreneurship courses. Indeed, the mean intention to become an entrepreneur was 5.38 on a 7-point scale, indicating relatively high intentionality across the sample, although this is consistent with previous studies of entrepreneurial intentions (e.g. Chen et al., 1998 and Zhao and Seibert, 2005). A third concern with the sample might be that the respondents may have exhibited ‘interviewer bias’ and produced responses that they felt were the ‘right’ answers given the course material they already had in their possession at the time of the survey. But note that the survey was conducted in the first hour of the first class of the entrepreneurship course, before any instruction in the principles of entrepreneurship had taken place, and it is considered highly unlikely that any students had read any of the course material other than the ‘opportunity recognition’ module assigned for the first class, and indeed it is considered unlikely that many of the students had even read this module prior to class. Fourthly, although we argued that individuals will adopt a negative regulatory focus when they are forming entrepreneurial intentions, we have speculated that our sample respondents would have adopted a negative regulatory focus when assessing the desirability of the career alternatives presented, and we cannot be sure from this study that this is true. Respondents were aware of the degree of risk, and of work effort required, (high or low) in each career scenario when assessing the desirability of each scenario, and we speculate that this would likely have induced a preventative regulatory focus. In future studies we would want to frame the scenarios more forcefully to more reliably induce a preventative focus in respondents. This paper identifies several avenues for further research into entrepreneurial intentions. Further research might include attempts to replicate this study in other national contexts and across more widely representative samples. Next, future research might employ a more reliable method for ensuring that respondents do indeed adopt a preventative regulatory focus in the viability screening process, rather than simply assuming they would, as we do, following Brockner et al. (2004). Several other interesting research issues have arisen in this paper. Can a reliable measure of an individual's attitude to ownership be gathered more economically as the (espoused) responses to a simple questionnaire, rather than revealed from the time-consuming and complex conjoint analysis of attitudes? Is the process by which entrepreneurial intentions are formed different for novice vs. serial entrepreneurs? That is, are attitudes less important as the behavior becomes habitual? Is the entrepreneurial process different for accidental entrepreneurs versus inevitable entrepreneurs? Are accidental entrepreneurs characterized by attitudinal ambivalence, and/or do they conduct more information search and processing (i.e. due diligence activity) than do natural entrepreneurs or inevitable entrepreneurs? These questions indicate that there is much scope for further research in this area.