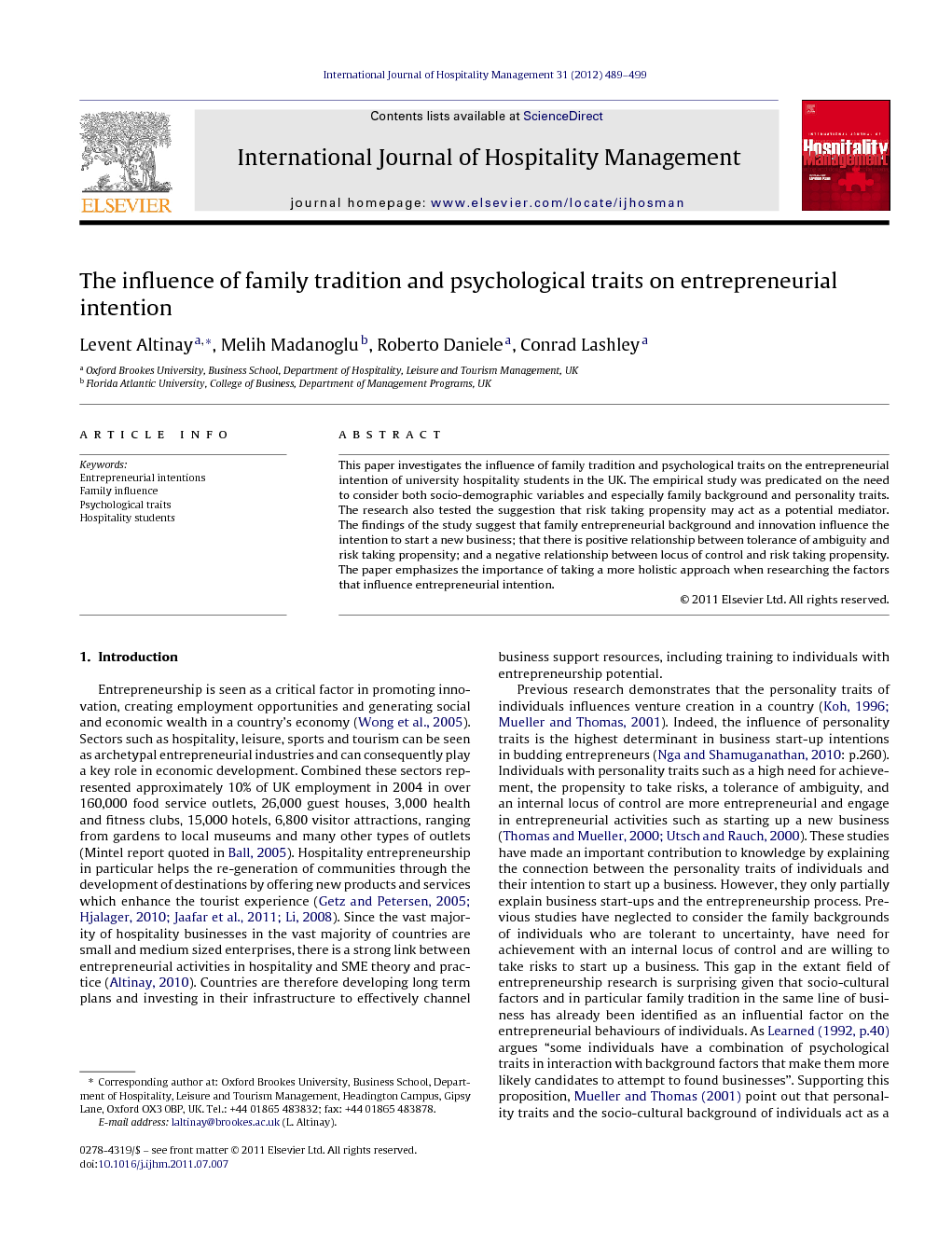 This paper investigates the influence of family tradition and psychological traits on the entrepreneurial intention of university hospitality students in the UK. The empirical study was predicated on the need to consider both socio-demographic variables and especially family background and personality traits. The research also tested the suggestion that risk taking propensity may act as a potential mediator. The findings of the study suggest that family entrepreneurial background and innovation influence the intention to start a new business; that there is positive relationship between tolerance of ambiguity and risk taking propensity; and a negative relationship between locus of control and risk taking propensity. The paper emphasizes the importance of taking a more holistic approach when researching the factors that influence entrepreneurial intention.

Entrepreneurship is seen as a critical factor in promoting innovation, creating employment opportunities and generating social and economic wealth in a country's economy (Wong et al., 2005). Sectors such as hospitality, leisure, sports and tourism can be seen as archetypal entrepreneurial industries and can consequently play a key role in economic development. Combined these sectors represented approximately 10% of UK employment in 2004 in over 160,000 food service outlets, 26,000 guest houses, 3,000 health and fitness clubs, 15,000 hotels, 6,800 visitor attractions, ranging from gardens to local museums and many other types of outlets (Mintel report quoted in Ball, 2005). Hospitality entrepreneurship in particular helps the re-generation of communities through the development of destinations by offering new products and services which enhance the tourist experience (Getz and Petersen, 2005, Hjalager, 2010, Jaafar et al., 2011 and Li, 2008). Since the vast majority of hospitality businesses in the vast majority of countries are small and medium sized enterprises, there is a strong link between entrepreneurial activities in hospitality and SME theory and practice (Altinay, 2010). Countries are therefore developing long term plans and investing in their infrastructure to effectively channel business support resources, including training to individuals with entrepreneurship potential. Previous research demonstrates that the personality traits of individuals influences venture creation in a country (Koh, 1996 and Mueller and Thomas, 2001). Indeed, the influence of personality traits is the highest determinant in business start-up intentions in budding entrepreneurs (Nga and Shamuganathan, 2010: p.260). Individuals with personality traits such as a high need for achievement, the propensity to take risks, a tolerance of ambiguity, and an internal locus of control are more entrepreneurial and engage in entrepreneurial activities such as starting up a new business (Thomas and Mueller, 2000 and Utsch and Rauch, 2000). These studies have made an important contribution to knowledge by explaining the connection between the personality traits of individuals and their intention to start up a business. However, they only partially explain business start-ups and the entrepreneurship process. Previous studies have neglected to consider the family backgrounds of individuals who are tolerant to uncertainty, have need for achievement with an internal locus of control and are willing to take risks to start up a business. This gap in the extant field of entrepreneurship research is surprising given that socio-cultural factors and in particular family tradition in the same line of business has already been identified as an influential factor on the entrepreneurial behaviours of individuals. As Learned (1992, p.40) argues “some individuals have a combination of psychological traits in interaction with background factors that make them more likely candidates to attempt to found businesses”. Supporting this proposition, Mueller and Thomas (2001) point out that personality traits and the socio-cultural background of individuals act as a stimulator and/or motivator of their entrepreneurial behaviours. Indeed, a family business tradition in the same or similar business sector helps an individual to acquire business knowledge and skills which if harnessed with their personality traits can stimulate entrepreneurial activity (Altinay and Altinay, 2006). Another key variable in evaluating entrepreneurship is an individual's propensity to take risk. There is an argument that the propensity to take risks is indeed a compound variable that encompasses other personality traits (Nicholson et al., 2005). On the other hand some authors view the propensity to take risks as a mediator between the variables of tolerance of ambiguity, locus of control (Wee et al., 1994), the need for achievement (Tang and Tang, 2007) and entrepreneurial intention. As a result, there is uncertainty about the role of risk-taking propensity and it is not clear whether the propensity to take risks is an exogenous variable, a mediator or a moderator. Our paper aims to investigate the relationship between the personality traits – locus of control, tolerance of ambiguity, innovativeness, need for achievement and propensity to take risks – of British hospitality students in higher education and their intentions to start up a business. In light of the findings that the influence of personality traits is the highest in determining business start-up intentions in budding entrepreneurs (Nga and Shamuganathan, 2010: p.260), a sample of undergraduate hospitality students have been employed. Interestingly, although hospitality and tourism students are being encouraged to engage in entrepreneurial activities in order to stimulate the development of destinations, there appears to be limited research into the antecedents of their business start up activities (Li, 2008). In addition, the sample consisting of hospitality students has been selected in view of the implications of this study on the hospitality education curriculum. In hospitality management higher education, specific entrepreneurship modules are widespread. For example, Ball (2005) identified 13 British Universities offering entrepreneurship related modules in their hospitality courses, mostly in the final stages of their degree program, and most modules were offered as electives rather than as part of the core curriculum. The paper also evaluates the moderating influence of family business tradition between the personality traits and intentions of students. In particular, the paper responds to the call of Gurel et al. (2010) for further research into the interface between the personality traits of hospitality and tourism students and their intentions to start up a business by considering the moderating effect of socio-cultural backgrounds of individuals.

The area of entrepreneurship research in hospitality and tourism is still in its infancy stage (Altinay, 2010 and Gurel et al., 2010). A large majority of previous studies focused on how entrepreneurship can be fostered in the tourism industry at the country level (Getz and Carlsen, 2005, Hjalager, 2007 and Russell and Faulkner, 2004). However, another important aspect to consider in hospitality entrepreneurship research may be the contribution of hospitality industry to a given nation's gross domestic product (GDP). For instance a joint study by Deloitte MCS Limited and Oxford Economics (2010) indicates that hospitality and tourism directly contribute £52 billion and supports 1.36 million jobs in the United Kingdom. Whilst these numbers seem like staggering, the economic influence of hospitality and tourism account for merely 4% of the GDP of the United Kingdom. Therefore, it is particularly important to investigate the inclination to engage in entrepreneurship in countries which heavily rely on hospitality as a contributor to their respective country's GDP. Given these, we set out to investigate the influence on family tradition and psychological traits on entrepreneurial intention of hospitality university students in the UK. Particularly, the suggestion of Learned (1992) to consider both socio-demographic variables (i.e., family background) and personality traits and the subsequent application of Gurel et al. (2010) guided our empirical study. We also tested the arguments of Tang and Tang (2007) about risk as a potential mediator. Firstly, this study developed a holistic framework by demonstrating the relationship between both psychological traits and socio-demographic variables and intention to start up a business. Our modest modelling effort of entrepreneurial intention produced a good fit. The good model fit gives us much confidence about building more complex models to explain intention to start a business among potential entrepreneurs in hospitality. We also agree with the sentiment of Gurel et al. (2010) that scholars in this area of research should take a more holistic approach to understand factors that influence entrepreneurial intention. Such an approach may further illustrate the importance of determinants of entrepreneurial intention in even more pronounced manner. In conclusion, as hospitality sector gains more and more recognition worldwide, it is to be expected that entrepreneurship research in hospitality will benefit from this interest. We hope that this study serves as a call for hospitality scholars to pay more attention to this area of research. Secondly, the paper responded to a research gap in both generic and hospitality management literatures that neglected family tradition in the same line of business as an influential factor on business start up intentions. This paper demonstrates that family tradition in hospitality is well and alive not only in rural and remote regions as Getz and Carlsen (2005) point out but also in urban settings in the United Kingdom. In the hospitality context, it is argued that family networks may indeed play a critical role in destination development (Lynch, 2005 and Tinsley and Lynch, 2001). Given that our research also identified family tradition as an influential factor on business start up intentions, researchers need to pay particular attention to the depth of informal networks, in particular family ties and kinships that small hospitality firms are embedded in. A study of role of family and kinships in business start up will help us to uncover hidden cultural attributes in small hospitality firms. Finally, another important and unique aspect of the paper is that the research investigated the mediating effects of risk-taking propensity by examining the relationship between exogenous variables and risk. This is particularly important as it is not clear in the literature whether the propensity to take risks is an exogenous variable, a mediator or a moderator. This research paper has shed some light on the nature and the role of risk taking in an entrepreneurial activity, namely business start up. It became apparent that risk taking propensity does not have mediating effects. There might be several explanations for this. One of them is that the informant's motivation to engage in entrepreneurship may not be strictly financial prosperity. Indeed this is documented by the National Survey of Small Tourism and Hospitality Firms in the United Kingdom where participants elected business ownership on the grounds of “doing what they enjoyed” (45%) and the “desire for independence” (30%) (as cited in Thomas et al., 1998). Hence this contextual phenomenon might explain why risk-taking propensity was not a significant determinant of propensity to take part in entrepreneurial hospitality ventures. It can be also conjectured that risk-taking propensity measure may be much more pronounced in other industries such as technology and innovation.