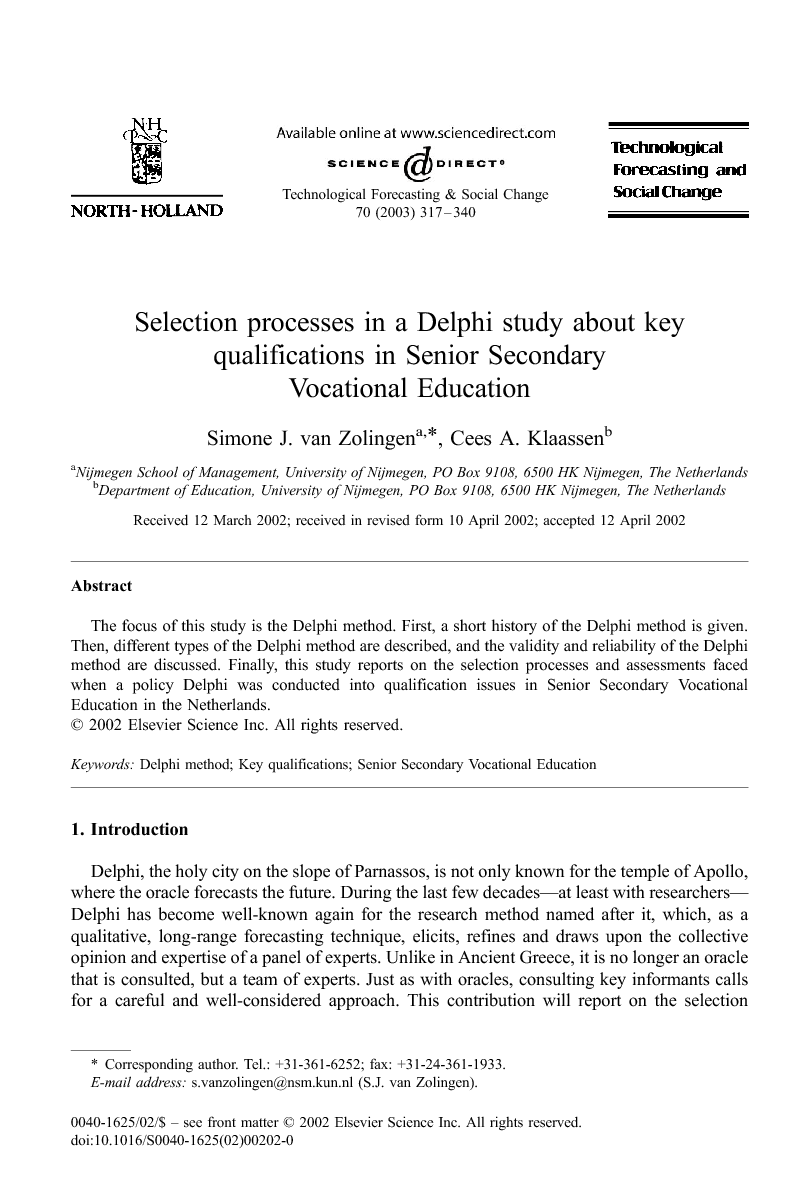 Delphi, the holy city on the slope of Parnassos, is not only known for the temple of Apollo, where the oracle forecasts the future. During the last few decades—at least with researchers—Delphi has become well-known again for the research method named after it, which, as a qualitative, long-range forecasting technique, elicits, refines and draws upon the collective opinion and expertise of a panel of experts. Unlike in Ancient Greece, it is no longer an oracle that is consulted, but a team of experts. Just as with oracles, consulting key informants calls for a careful and well-considered approach. This contribution will report on the selection processes and assessments that we had to face when we conducted a Delphi study into qualification issues in vocational education. The Delphi method was developed in the fifties in the context of defense research. This was done at ‘Rand Corporation’ in the United States. Dalkey and Helmer [1] were looking for a method to obtain a reliable consensus about the opinions of various defense experts on the effects of a possible big nuclear attack. With the help of this new method, they sought to maintain control of certain group processes. Thus, they tried to eliminate specific factors such as: • the tendency of low status group members ‘to go along with’ the opinion of group members with a higher status; • the tendency of a group to exert pressure on its members to conform; • the tendency of a dominant group member to exert undue influence on the opinion of the group. Linstone and Turoff [2] defined the Delphi method as “a method for structuring a group communication problem” (p. 3). The Delphi method consists of experts' judgement by means of successive iterations of a given questionnaire, to show convergence of opinions and to identify dissent or nonconvergence. Each iteration constitutes a round, and the questionnaire is the medium for the experts to interact. The Delphi method is considered especially useful for long-range aspects (20–30 years) as expert opinions are the only source of information available. The main advantage of this method is that panel members can shift position without losing face if they see convincing reasons for doing so [3]. In the sixties and early seventies, the Delphi method was widely applied. This is exemplified by research into forecasts of future developments in science and technology and how they affect society [4]. In a study into 800 Delphi method applications, Brockhaus and Michelsen [5] found that in that period, the method was most applied in science. In addition to the original form of the Delphi method, i.e. the ‘classical’ Delphi aimed at obtaining stability in responses among the experts on a specific issue (i.e. where there has been no change in the group's response to an issue from one iteration to the next), a new type of Delphi emerged in the seventies [6]. The latter focusses on formulating goals and indicating priorities in, for example, policy programmes and participation or budgeting programmes. This latter type of Delphi—the ‘policy’ Delphi—has substantially widened the method's range of application. It has now become an instrument for policy development. It is not aimed at obtaining stability in responses among experts, but, on the contrary, clarification of divergent views and elucidation of arguments are the central elements of this type of Delphi [7]. Beside the ‘classical’ and the ‘policy’ Delphi, still other types have been developed [8] and [9] and are still being developed [10] and [11]. In a more recent review of 463 papers concerning the Delphi method, Gupta and Clarke [12] mention a very broad application of the Delphi method in business, education, health care, real estate, engineering, environment, social science, tourism and transportations. The widespread use of the Delphi method today in national foresight projects clearly is designed to serve as a communication process to increase awareness among government planners and policymakers of the future environment rather than as specific forecasts [3]. In the following paragraph, we will review the various types of the Delphi method1 on main points. Discussion of the four major types of the Delphi method will illustrate that this method holds many possibilities. It is suitable not only for predicting future developments and/or events, but also for generating policy alternatives or decision making on them. While outlining the types concerned, we will deal in more detail with a number of choices they involve and the validity and reliability issues connected with this method. Basing ourselves on a study into key qualifications in Senior Secondary Vocational Education, we will sketch the choices and problems that actually confronted us in designing and implementing a ‘policy’ Delphi in the Netherlands [13] and [14]. The paper will be concluded with a couple of conclusions and assessments prompted by the experiences gained during this study.

The experience gained in the present study into qualifications of school-leavers from Senior Secondary Vocational Education has shown that after careful definition of initial jobs it seems to be useful and necessary to conduct a pilot study into the nature and description of qualification aspects of the initial jobs concerned, before starting the Delphi study proper. In this study, Mitchell's suggestion [24], i.e. to interview the experts in the first round of a Delphi study and submit open questions to them, was used in the pilot study but not with the experts taking part in the ‘policy’ Delphi. A number of experts very thinly substantiated their opinions in the questionnaires. This effect corresponds with what Van Dijk [31] found in his study. Only in the group meeting did the motives of these experts emerge. In view of these experiences, it is advisable to follow Mitchell's suggestion. In our case, the questionnaire would probably have yielded better results. The experts had received extensive information about the study and declared themselves willing to cooperate before they were sent the questionnaire of the first round. To these highly time consuming but careful preparations, we attribute the low dropout of experts during the questionnaire round, which enabled us to avoid selection bias. Unfortunately, it turned out to be impossible to get experts to promise their cooperation in the group meeting at the same time. By and large, they were too busy for that. The length of the questionnaires turned out to be quite problematic. Several experts expressed criticism on this point. In most cases, they solved the problem themselves by spreading answering them over several days. This did imply, however, that it took long for these questionnaires to be returned. As a result, feedback did not occur until after 9 months. However, the experts did not find this a problem, since this information had been clearly produced in the information file mailed to them before the working conference. During the group meeting, the composition of the educational and work panels was less diverse than originally planned. A number of experts that had explicitly promised to be present called off for various reasons at such a late moment that there was no more time to find substitutes for them. For the expert that did call off in time, within the panel that had answered the questionnaire, no replacement appeared to be available on the date planned. For that reason, we were not able completely to avoid the selection bias in this group meeting, which we did avoid in the first round. In view of these experiences, it seems advisable only to let experts cooperate in a Delphi that explicitly commit themselves to participating in all rounds and can ensure that they are replaced by someone with the same expertise. Another problem that occurred in the group meetings was the need to prevent the participants from mixing up the qualification question for initial job holders with the qualifications required from more advanced employees. By constantly emphasizing that the study is concerned with initial jobs, this obstacle could be bypassed. The evaluation of the group meeting showed that the experts from the sectors of work and education found the mutual confrontation of opinions highly instructive and informative.