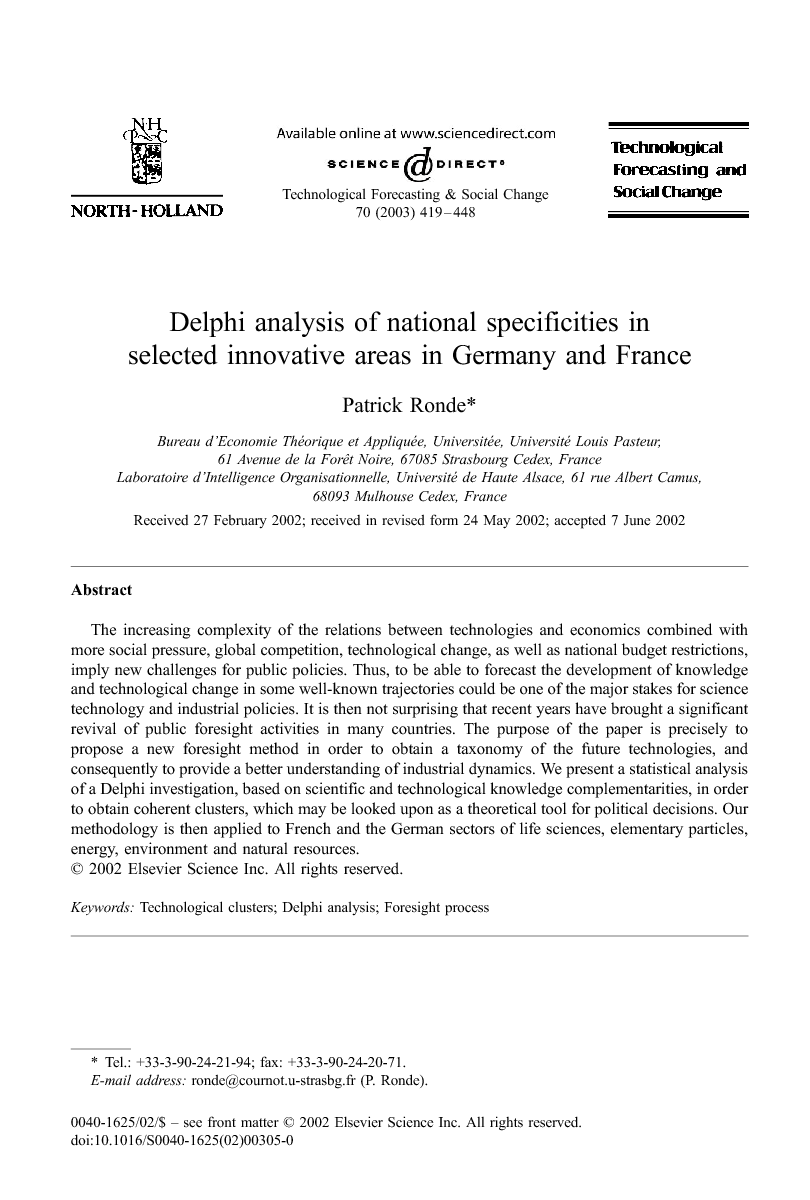 The increasing complexity of the relations between technologies and economics combined with more social pressure, global competition, technological change, as well as national budget restrictions, imply new challenges for public policies. Thus, to be able to forecast the development of knowledge and technological change in some well-known trajectories could be one of the major stakes for science technology and industrial policies. It is then not surprising that recent years have brought a significant revival of public foresight activities in many countries. The purpose of the paper is precisely to propose a new foresight method in order to obtain a taxonomy of the future technologies, and consequently to provide a better understanding of industrial dynamics. We present a statistical analysis of a Delphi investigation, based on scientific and technological knowledge complementarities, in order to obtain coherent clusters, which may be looked upon as a theoretical tool for political decisions. Our methodology is then applied to French and the German sectors of life sciences, elementary particles, energy, environment and natural resources.

The increasing complexity of the relations between technologies and economic problems combined with the occurrence of increased social pressure, more global competition, accelerated technological change, as well as national budget restrictions, imply new challenges for public policies and especially for science and technology policies. Hence, the desire to identify those technologies, which will have the greatest impact on economic competitiveness and social welfare is expressed from various sides [1]. Therefore, it is not surprising that recent years have brought a significant revival of public foresight activities in many countries around the world [2]. At the starting point of foresight is the belief that there are many possible futures and that the future which will occur partly depends on the decisions we take now. Hence, foresight is defined here as the “process involved in systematically looking into the longer-term future of science, technology, economy and society with the aim of identifying the areas of strategic research and the emerging generic technologies likely to yield the greatest economic and social benefits” [3]. The ultimate goal of foresight is to ensure that areas of science and technology that are likely to yield future socioeconomic benefits are promptly identified. Identifying emerging generic technologies is very important not only in order to ensure high socioeconomic benefits but also because of the path-dependency character of industrial dynamics. As a matter of fact, in the evolutionary tradition, the development of a technological trajectory is the outcome of the intrinsically cumulative nature of learning processes and therefore, the generation of new knowledge builds upon what has been learned in the past [4], [5], [6] and [7]. Hence, research is typically characterised by increasing dynamic returns in the form of learning by doing, learning to learn and the fact that today's research generates tomorrow's new opportunities [8] and [9]. Therefore, technological cumulativeness and localised learning generate irreversibility, which is expressed by the property of path-dependency in the evolution of the trajectory [10] and [11]. Thus, the mode of development of a technology and the choice of many potential trajectories are strongly influenced by initial decisions.1 Initial or transitory actions put the system on a path that cannot be left without costs, as pointed out first by P. David [12] with the famous example of QWERTY. One of the major problems, which can block industrial development, concerns the context of these initial decisions made under great uncertainty and ignorance about the respective qualities and properties of the various options. Taking decisions and at the same time eliminating options in a context of ignorance, entail the risk of missing the best path of development because technological variants with unique properties may be lost and never properly explored [10]. Thus, the technical and economic features of a trajectory may lock the economic system in some suboptimal alternatives [13], [14] and [15]. Many cases of such suboptimal alternatives are developed in the literature of “potential regret in economic history” [10] with the well known examples of the QWERTY keyboard [13] or nuclear power [16]. Another problem concerns the possible existence of bottlenecks in the development of a technological trajectory which can block the diffusion processes as it was the case in biotechnology [17] or the metal casting's field [18] and [19]. In the light of those elements, we argue that sometimes, industrial development requires governmental intervention based on a foresight analysis. In fact, the path dependence feature of the system implies that initial or transitory conditions in the form of a preexisting technology basis, actors and networks play an important role. Moreover, the importance of strategies of first user choice [20] shows the role that government can play to orient the process toward the best possible trajectory in the early stage of the development of a trajectory. Therefore, foresight processes can be of primary importance if the target is to anticipate the real demand for technology and to assess the right moment for public intervention, in order to avoid bottlenecks and suboptimal trajectories. If the foresight process is able to promptly identify generic technologies, then public intervention could shape the construction of techno-industrial clusters and influence the constitution of the National System of Innovation (NSI) in a desirable way. The main purpose of the paper is hence to propose a foresight method which provides a taxonomy of future technologies and a first tool for understanding the emergence and the constitution of National Systems of Innovation both in France and in Germany. In Section 2, we present our data and methodology. In Section 3, our results are examined with the aim of proving that our analysis is able to stress a first representation of the main differences between the French and German National Systems of Innovation and the future technological trajectories for several technological fields. Section 4 devotes some consideration to the method and some policy implications. We conclude the paper in Section 5.

Besides the aim of triggering learning effects in the whole research and innovation system [2], an important role, assigned to foresight experiences is to select national priorities. Our methodology precisely allows the construction of a coherent typology of knowledge-based innovation, which makes it possible to identify several technological clusters and the associated trajectories. In our view, the possibility to promptly identify particular trajectories, and hence to allow public actions before being locked in some suboptimal or not desired trajectory, is the main contribution of the method. A second contribution is to permit international comparisons of NSI and thus to stimulate country-wide communication about the future in order to promote industrial coherence in Europe. Nevertheless, as we specified earlier, our tool is only a first step in shaping the future. Other methods are still needed (with interviews of experts and construction of script, for example) in order to validate those primary results.