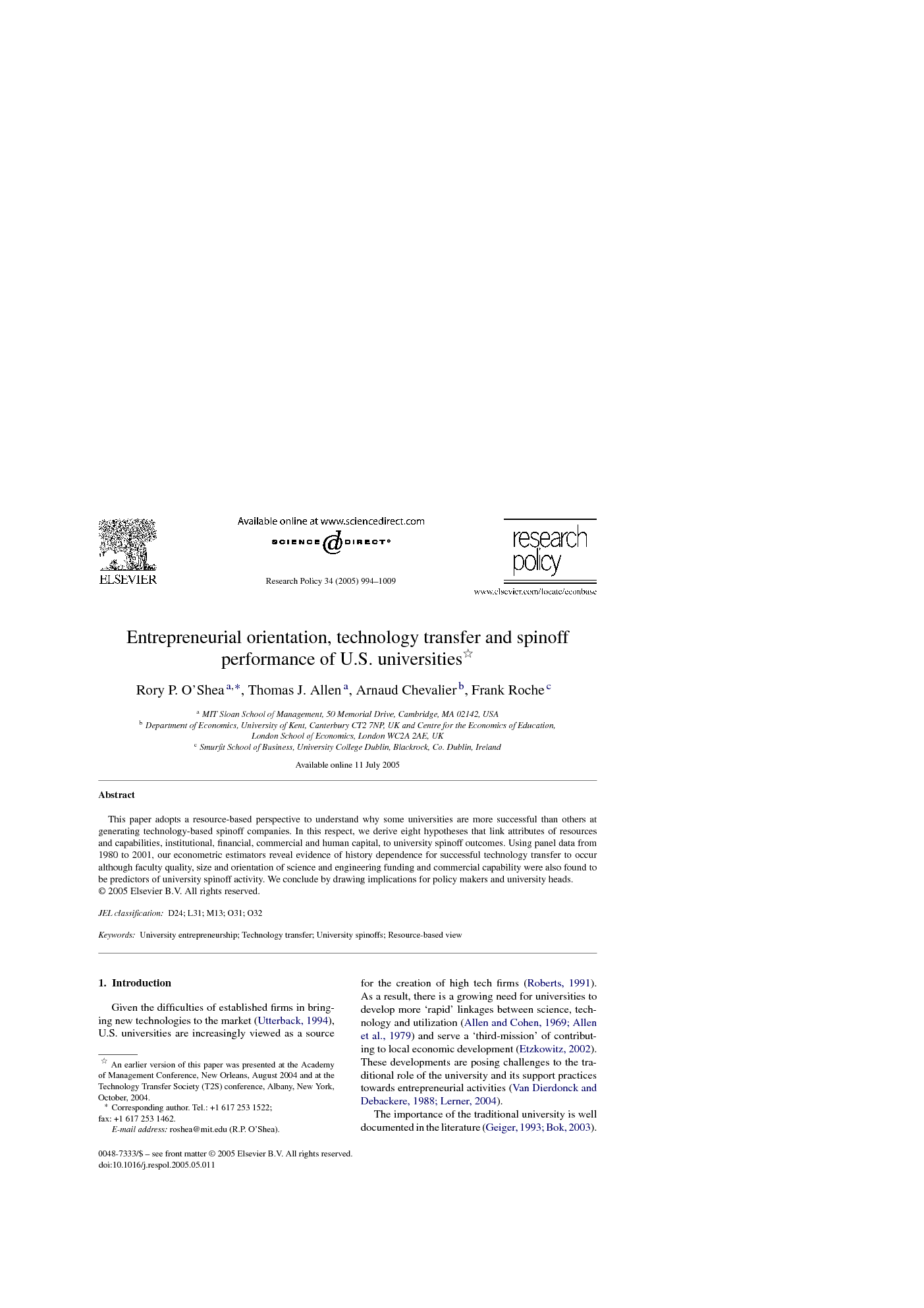 This paper adopts a resource-based perspective to understand why some universities are more successful than others at generating technology-based spinoff companies. In this respect, we derive eight hypotheses that link attributes of resources and capabilities, institutional, financial, commercial and human capital, to university spinoff outcomes. Using panel data from 1980 to 2001, our econometric estimators reveal evidence of history dependence for successful technology transfer to occur although faculty quality, size and orientation of science and engineering funding and commercial capability were also found to be predictors of university spinoff activity. We conclude by drawing implications for policy makers and university heads.

Recent research underscores the importance of universities in contributing to local economic development, leading edge research, high value jobs and innovation (Etzkowitz, 2002). Unfortunately, for many institutions, efforts to make universities more entrepreneurial have not had sufficient impact. In fact, recent findings in Europe (Jones-Evans et al., 1999 and Wright et al., 2003) suggest that many universities are not experiencing a significant increase in spinoff behavior. As a consequence, many universities today are looking to improve their strategies for dealing with the vestiges of academic entrepreneurship. From an academic standpoint, the reasons why rates of spinoff activity differ among universities have motivated economists and management scientists to study this important topic of recent. However, little is still known about the relative influence of university resource endowments in spinoff behavior. Therefore, using panel data from 1980 to 2001, we address this gap by developing a theoretical and econometric model to understand why some U.S. universities are more successful than others at generating spinoff companies. This longitudal approach allowed us to resolve the endogeneity issue that otherwise plagues cross-sectional technology transfer analyses. A central finding of our research confirms the notion that each university, as a function of its history and past success, has different resource stocks available and these resource combinations are shown to be a relevant factor in explaining inter-university variation in spinoff activity. These findings support a path dependency argument that current choices of technologies, products and operation are heavily influenced, probably even constrained, by the cumulative effect of previous development (Arthur, 1989). Thus, public policy and university heads would be advised to intensify their activities to implement educational, research and resource programs to enable a culture of academic entrepreneurship to emerge within universities (Lüthje and Franke, 2003). Furthermore, the image of academic entrepreneurship as a career path for academics to pursue should be enhanced through developing incentives for academics to participate in entrepreneurial process. Our second finding relates to the impact of science and engineering faculty quality on university spinoff activity. The presence of star scientists and engineers affect university spinoff activity as they have leading-edge knowledge with critical expertise and ability to create radical innovations (Schumpeter, 1950) conducive for commercial exploitation. Consistent with the work of Powers and McDougall (2005) and DiGregorio and Shane (2003), this result highlights the critical importance of investing, recruiting and retaining top ranked science and engineering faculty. However, it is worth noting, the number of faculty and postdoctoral staff aligned to an institution is incidental to spinoff production. These findings reinforce empirical work from Van Looy et al. (2004) that highlight the mutual reinforcing nature of faculty quality and entrepreneurial activity of universities. A third finding of our study shows that the size and nature of financial resources allocated to universities influence academic entrepreneurship. First, we examined the ratio of industrial support to total research support in an attempt to capture the applied nature of research of universities and found a significant positive effect with this variable. Therefore, our result suggests that a greater proportion of industry-level funding is associated with higher levels of technology transfer. From a policy perspective, this suggests pursuing greater industry–university collaborations generate beneficial effects for technology transfer. Furthermore, our results also reveal that the size of federal science and engineering funding with a particular orientation on life science, computer science and chemistry disciplines show positive and statistically significant results. This finding supports the view those opportunities for technology commercialization and the propensity of faculty members to engage in technology transfer vary substantially across fields (Shane, 2004a and Siegel and Phan, 2005). This finding holds implications for policy makers seeking a return on investment from R&D expenditure inputs. A fourth finding of our study also provides convincing evidence that the magnitude of resources invested in TTO personnel increases spinoff activity. In each regression specification model, our findings show results significantly different from zero. Given the complex and time-intensive job of identifying, sourcing and exploiting university technologies for commercial exploitation, this finding highlights the greater the size of the TTO offices, the greater the likelihood of the university to produce spinoffs. These results are interesting because they clearly confirm the relevant role of tangible and intangible resources in accounting for university spinoff activity. In summary, these findings provide evidence that the organizational characteristics of universities play a significant role in the entrepreneurial behavior of academics. These findings suggest that in order for policy makers to encourage academic entrepreneurship a comprehensive systems approach to the identification, protection and commercialization of university intellectual property needs to be undertaken (Arrow, 1962). In particular, we argue (1) the need for the development of a commercially supportive culture to emerge within universities to enable academic entrepreneurship to flourish; (2) the need for active partnership and financial support with industry and government funding agencies; (3) the recruitment and development of science and engineering academic stars and (4) the development of a commercial infrastructure to enable the valorization of academic research to occur. However, it also worth noting that while our research has found that spinoff activity is positively related to knowledge accumulation dynamics and learning effects, a limitation of our study is that it does not identify the university levels at which learning dynamic effects operate. Therefore, studies that can augment our current research findings with more fine-grained methods (Birley and Gartner, 2002) in the form of qualitative research may provide insights into where learning effects occur and the nature and processes they go through to influence start-up activity.