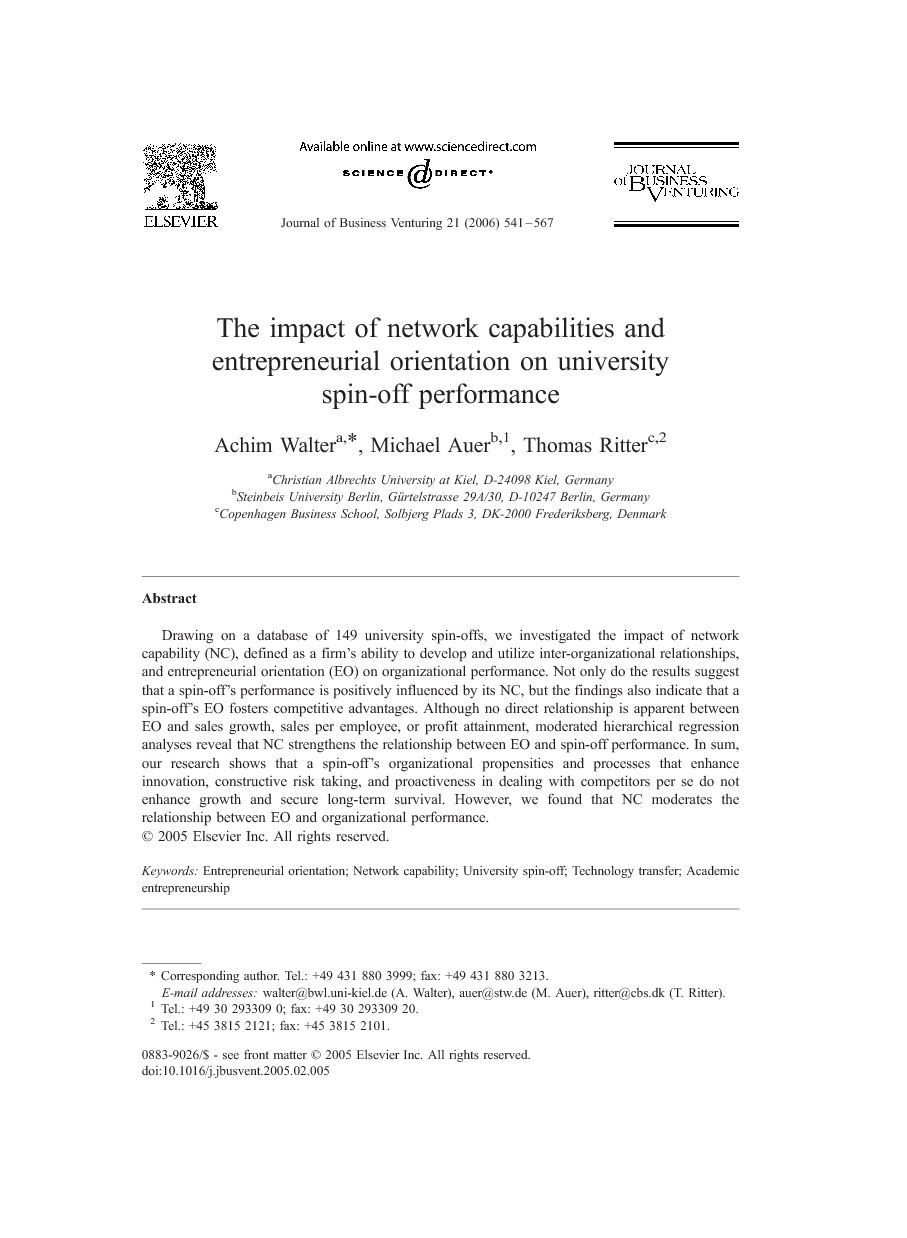 University spin-offs can be seen from different perspectives: as sources of employment (Pérez and Sánchez, 2003; Roberts, 1991a), as mediators between basic and applied research that enable their customers to compete on the technological forefront (Autio, 1997), as contributors to higher innovation efficiency (Rothwell and Dodgson, 1993) and to a regions' economic development (Mian, 1997), or as change agents of the economic landscape moving traditional boundaries between basic and applied research (Abramson et al., 1997 and Roberts, 1991b). Spin-offs are confronted with a number of serious obstacles. Academic firms struggle to establish close links to customers and suppliers after their spinout (e.g., Pérez and Sánchez, 2003; Stuart et al., 1999), and failure rates of alliances and collaborative agreements can reach 70% (Duysters et al., 1999 and Park and Ungson, 2001). Academic interest has recently focused on the ability of firm characteristics to explain differences in alliance success. Such characteristics include alliance capability (Kale et al., 2000), relational capability (Lorenzoni and Lipparini, 1999), and network capability (Anand and Khanna, 2000). Although a number of studies have examined the relational capabilities of firms, no study has focused explicitly on a university spin-off's ability to manage business networks. This paper closes this gap by focusing on spin-offs' capabilities to develop, maintain and use business relationships and strategic alliances. Entrepreneurial aspects such as opportunity identification, risk taking, and resource mobilization have been highlighted as critical success factors for academic spin-offs (Roberts, 1991a and Steffensen et al., 1999), where entrepreneurial behavior is believed to stimulate growth and economic performance. Entrepreneurship is regarded as crucial to bridging gaps between the research and business worlds (Abramson et al., 1997). Based on that assumption, representatives of industry, government and science increasingly challenge academics to transfer their research results to companies in an entrepreneurial fashion (Doutriaux, 1987 and Franklin et al., 2001). However, few empirical studies have analyzed the impact of a spin-off's entrepreneurial characteristics on its performance. Case studies of academic spin-offs conducted by Bray and Lee (2000), Pérez and Sánchez (2003), and Steffensen et al. (1999) provide some evidence that a match of entrepreneurial ambitions and marketing abilities characterizes successful spin-offs. However, no study has focused specifically on the relationship between a university spin-off's network capability and entrepreneurial behavior. Entrepreneurship is often said to exist in a firm that “engages in product market innovation, undertakes somewhat risky ventures and is first to come up with ‘proactive’ innovations, beating competitors to the punch” (Miller, 1983, p. 771). Prior theory and research acknowledge entrepreneurial orientation as an important constituent for organizational success (Lumpkin and Dess, 1996). Many authors argue that entrepreneurial behavior is vital for firms of all sizes to prosper in competitive environments (Covin and Slevin, 1988, Lumpkin and Dess, 1996, Miller, 1983 and Zahra, 1993a). However, empirical studies indicate that the relationship between a firm's entrepreneurial orientation and desired organizational outcomes, like sales growth and profitability, is not as straightforward as often assumed (e.g., Covin and Slevin, 1990 and Dess et al., 1997). Obviously, an entrepreneurial orientation per se is not necessarily desirable in all situations (Covin and Slevin, 1988). The success of entrepreneurial orientation may be affected by the firm's organization structure, corporate culture, and/or environmental dynamism. Many entrepreneurship studies postulate a strong EO–performance relationship, especially in hostile and/or technologically sophisticated environments (e.g., Naman and Slevin, 1993 and Covin and Slevin, 1998). Such environments can be assumed for university spin-offs and, therefore, we assume that EO is important to the growth and profitability of academic spin-offs. The commercialization of new technologies is usually characterized by intense innovative competition (Shan, 1990). In several cases, spin-offs have to develop their own markets because they are offering a unique product or service addressing the needs of only a few customers (Olofsson and Wahlbin, 1984, Pérez and Sánchez, 2003 and Rodenberger and McCray, 1981). As such, spin-offs challenge existing markets and technological standards, try to gain other firms' customers and, thus, attack fortified hills. Therefore, spin-offs very often undertake an entrepreneurial behavior outlined by Schumpeter (1934) as “creative destruction.” At the same time, exploitive behavior is not necessarily a common characteristic of university scientists starting or leading a venture (Van Dierdonck and Debackere, 1988). In addition, academic spin-offs are frequently monitored by potential competitors, firms that may be capable of imitating products and/or services quickly on a large scale—or simply acquire the firm. Thus, we believe that entrepreneurial orientation is a crucial characteristic of university spin-offs. This paper addresses this question and investigates relationship between entrepreneurial orientation and performance in university spin-offs. The paper also examines the moderating effect of network capabilities on the entrepreneurial orientation–performance relationship. Entrepreneurship scholars have emphasized the need to go beyond the investigation of bivariate correlations between entrepreneurship and performance variables (Covin and Slevin, 1991 and Lumpkin and Dess, 1996) to reduce misleading inferences about the entrepreneurship–performance relationship. Therefore, a contingency model for examining the alignment among the key constructs is developed. In relation to our research question – the impact of NC and EO on performance – we argue that the analysis of university spin-offs contributes to an understanding of this matter because (1) a great variety of degrees of NC and EO among university spin-offs can be assumed, and (2) the impact of NC and EO should be high given the market conditions in which these firms are operating. The remainder of the paper is organized as follows: after the development of hypotheses, our ideas are tested on a sample of spin-offs from higher education institutions before the implications of our study are discussed.