عنوان انگلیسی
Valuing ecosystem goods and services: a new approach using a surrogate market and the combination of a multiple criteria analysis and a Delphi panel to assign weights to the attributes
دانلود فوری مقاله + سفارش ترجمه 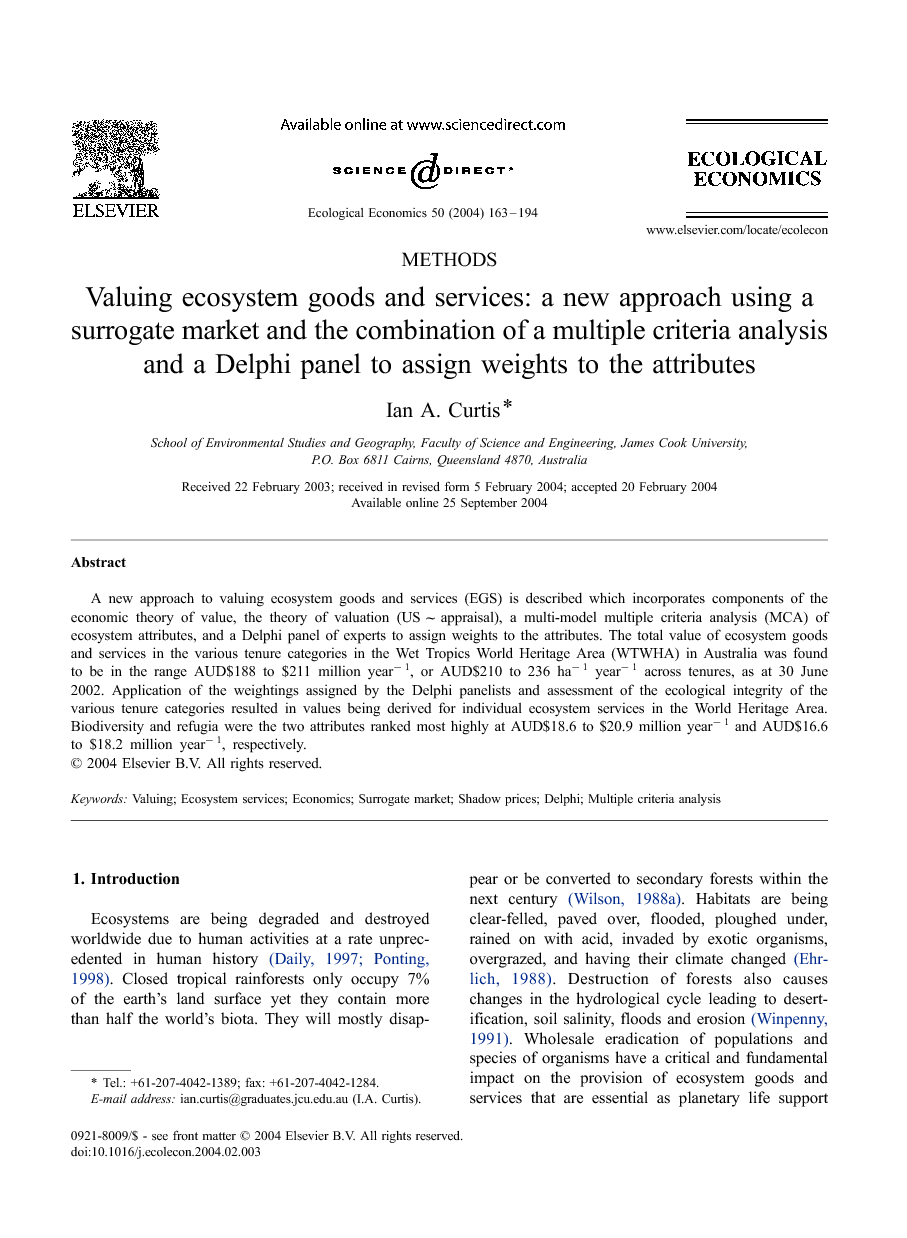 A new approach to valuing ecosystem goods and services (EGS) is described which incorporates components of the economic theory of value, the theory of valuation (US∼appraisal), a multi-model multiple criteria analysis (MCA) of ecosystem attributes, and a Delphi panel of experts to assign weights to the attributes. The total value of ecosystem goods and services in the various tenure categories in the Wet Tropics World Heritage Area (WTWHA) in Australia was found to be in the range AUD$188 to $211 million year−1, or AUD$210 to 236 ha−1 year−1 across tenures, as at 30 June 2002. Application of the weightings assigned by the Delphi panelists and assessment of the ecological integrity of the various tenure categories resulted in values being derived for individual ecosystem services in the World Heritage Area. Biodiversity and refugia were the two attributes ranked most highly at AUD$18.6 to $20.9 million year−1 and AUD$16.6 to $18.2 million year−1, respectively.

Ecosystems are being degraded and destroyed worldwide due to human activities at a rate unprecedented in human history Daily, 1997 and Ponting, 1998. Closed tropical rainforests only occupy 7% of the earth's land surface yet they contain more than half the world's biota. They will mostly disappear or be converted to secondary forests within the next century (Wilson, 1988a). Habitats are being clear-felled, paved over, flooded, ploughed under, rained on with acid, invaded by exotic organisms, overgrazed, and having their climate changed (Ehrlich, 1988). Destruction of forests also causes changes in the hydrological cycle leading to desertification, soil salinity, floods and erosion (Winpenny, 1991). Wholesale eradication of populations and species of organisms have a critical and fundamental impact on the provision of ecosystem goods and services that are essential as planetary life support systems, and not only for humans (Nunes and van den Bergh, 2001). The extraordinary variety of life on earth had been imagined through the work of luminaries such as Erwin (1988) and Wilson, 1988b and Wilson, 2002, however, the growth of the study of biological diversity as a field of scientific endeavour is revealing an even greater variety of life-forms and inter-connected evolutionary niches. Ignorance of these interactions and their connotations with respect to nature's services, such as the contribution of soil organisms to atmospheric composition, indicates that humans still lack basic understanding of the contributions made by the natural environment to planetary life support (Beattie and Erhlich, 2001). The genetic diversity within species is declining rapidly and it is largely irreplaceable. Protected areas or reserves may no longer be the solution to preserving genetic diversity, as climate change could cause forest migration and desertification and many existing natural populations of wild organisms will no longer be able to survive within their present ranges (Peters, 1988). An alternative would be for human modified areas to be made more environmentally hospitable and a balance maintained between wildlife habitat areas and areas designated for human habitation and food production (Winpenny, 1991). Scheffer et al. (2000: 451) argue that: “good ecosystem models, institutionalised ecosystem valuation, and innovative tax-setting schedules are essential to achieving a socially fair and sustainable use of ecosystems by societies”. Ecosystem goods and services (EGS) can only support human life if a well-functioning and rich variety of systems are spread over most of the Earth's surface (Meffe and Carroll, 1997). Impairment of the ability of ecosystems to provide a sustained flow of beneficial services suggests the loss of a valuable resource (Howarth and Farber, 2002). Ecosystem services may be defined as the products of the role that ecological systems play in providing a sustainable environment for life support, such as clean air, clean water, food, habitat and recreational opportunities (Table 1). In this paper, a new method to value the environment will be described. Relying on valuation theory and the property market as a surrogate market, the total value of the Wet Tropics World Heritage Area (WTWHA) in Australia is determined. A multiple criteria analysis (MCA) combined with a Delphi Inquiry is then used to assign shadow prices to the individual EGS and groups of goods and services provided by the World Heritage Area.

The values only apply to a certain point in time as the components used to derive them are themselves variables. The MUV for each LGA will vary as to the temporal regularity of valuations and provision of this information to the LGAs for rating purposes. UFpa will vary as to the cost of money and investment in other comparable securities in the economic system. The measure of ecosystem integrity, esi, will vary as to condition of the subject land, level of protection and land use. The weights will only change if further studies are done which reflect other preferences for the relative importance of the attributes, or environmental conditions change such that certain attributes become more or less at threat. The area of the tenure categories may change as some land is elevated to a higher order tenure (State Forest to National Park), and other land subverted to a lower order tenure, such as for increased infrastructure in the region. The methods chosen for this research were unashamedly positivist–rationalist, however, when seeking an outcome that would have practical application in the real world, no apology is necessary. The use of an existing database of property values was complemented by valuation theory to arrive at the pecuniary value of EGS. The Delphi panel ascribed non-pecuniary weights to the EGS, which were subject to systematic and statistical analysis. Ecological and land use parameters were used to determine the extent to which EGS were intact based on a model of ‘distance from disturbance’. The result was a simple algorithm. The production function of land managed for conservation is ecosystem goods and services (author's emphasis). The method is readily transferable across LGA and bioregional borders, and the variation in UFpa can be used as a relative measure for impact mitigation across borders.