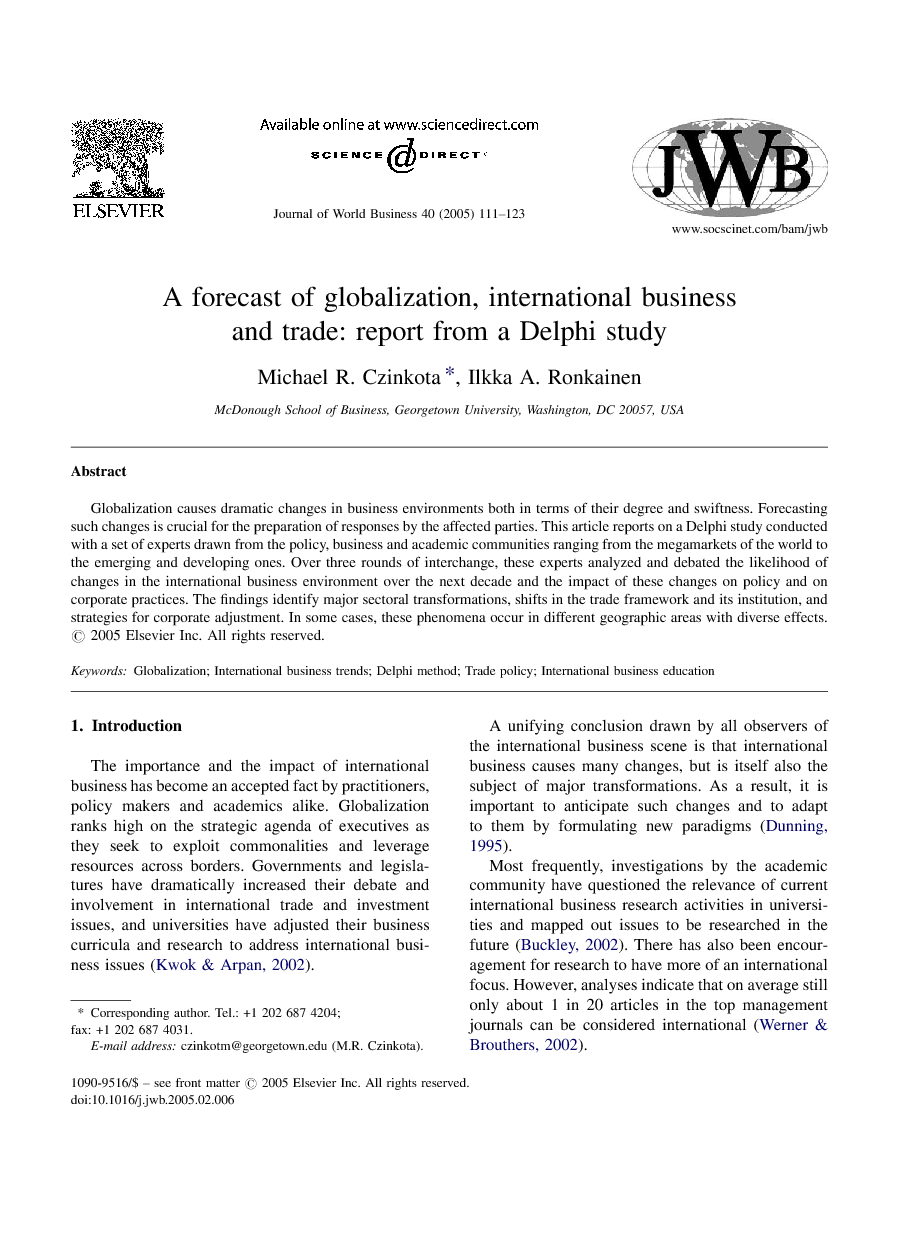 Globalization causes dramatic changes in business environments both in terms of their degree and swiftness. Forecasting such changes is crucial for the preparation of responses by the affected parties. This article reports on a Delphi study conducted with a set of experts drawn from the policy, business and academic communities ranging from the megamarkets of the world to the emerging and developing ones. Over three rounds of interchange, these experts analyzed and debated the likelihood of changes in the international business environment over the next decade and the impact of these changes on policy and on corporate practices. The findings identify major sectoral transformations, shifts in the trade framework and its institution, and strategies for corporate adjustment. In some cases, these phenomena occur in different geographic areas with diverse effects.

The importance and the impact of international business has become an accepted fact by practitioners, policy makers and academics alike. Globalization ranks high on the strategic agenda of executives as they seek to exploit commonalities and leverage resources across borders. Governments and legislatures have dramatically increased their debate and involvement in international trade and investment issues, and universities have adjusted their business curricula and research to address international business issues (Kwok & Arpan, 2002). A unifying conclusion drawn by all observers of the international business scene is that international business causes many changes, but is itself also the subject of major transformations. As a result, it is important to anticipate such changes and to adapt to them by formulating new paradigms (Dunning, 1995). Most frequently, investigations by the academic community have questioned the relevance of current international business research activities in universities and mapped out issues to be researched in the future (Buckley, 2002). There has also been encouragement for research to have more of an international focus. However, analyses indicate that on average still only about 1 in 20 articles in the top management journals can be considered international (Werner & Brouthers, 2002). Several characteristics are common to all these studies. One is their primary focus on one country only when investigating a global phenomenon. Even though change in international business is driven by the interaction of the business, policy and academic communities, past research typically queries only one group of these players. In consequence, the insights provided are limited to the views of the one group investigated, and do not reflect the important and possibly different perspectives of the two groups left out. This dearth of coverage is particularly noticeable with regards to the policy community, whose views are only rarely investigated by international business scholars. Policy concerns continue to be woefully under represented. Czinkota (2000) found the policy orientation by authors to range between 2.4% and 5.2% in key journals and Schlegelmilch (2003) reports that over a 10-year period, only 5.8% of the articles published in the Journal of International Marketing focused on legal and public policy aspects. The situation differs little in reverse. A 20-year analysis of the Journal of Public Policy and Marketing showed that only 11% of policy articles focused on multinational policy makers. “Policy watch” articles had a 0% international focus (Sprott & Miyazaki, 2002). A final key characteristic of past research is the fact that virtually none of these studies reflected any interaction between the business, policy and research communities on the subject of trends and changes. Such interaction, however, is imperative in order to obtain a reasonably accurate and calibrated forecast of impending metamorphoses.