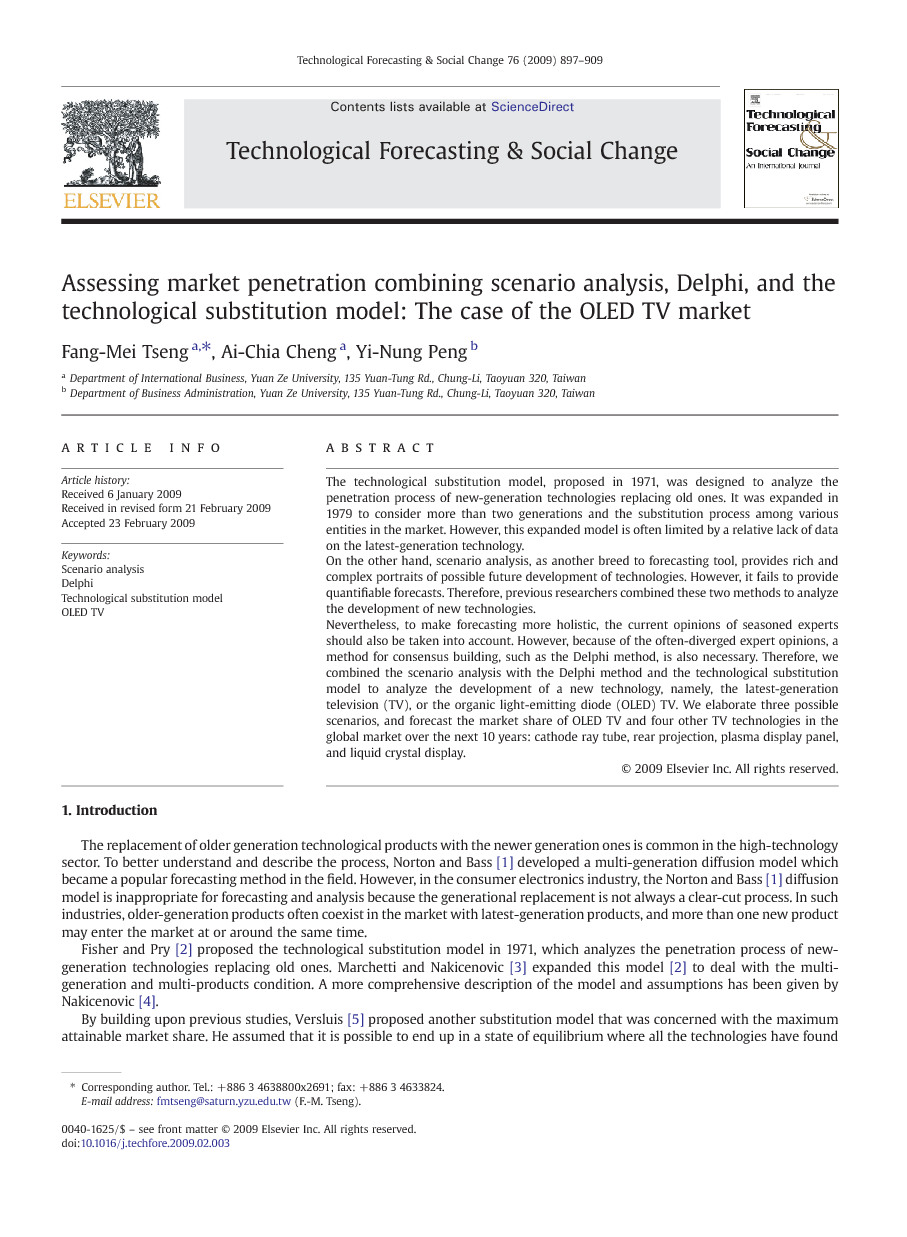 The technological substitution model, proposed in 1971, was designed to analyze the penetration process of new-generation technologies replacing old ones. It was expanded in 1979 to consider more than two generations and the substitution process among various entities in the market. However, this expanded model is often limited by a relative lack of data on the latest-generation technology. On the other hand, scenario analysis, as another breed to forecasting tool, provides rich and complex portraits of possible future development of technologies. However, it fails to provide quantifiable forecasts. Therefore, previous researchers combined these two methods to analyze the development of new technologies. Nevertheless, to make forecasting more holistic, the current opinions of seasoned experts should also be taken into account. However, because of the often-diverged expert opinions, a method for consensus building, such as the Delphi method, is also necessary. Therefore, we combined the scenario analysis with the Delphi method and the technological substitution model to analyze the development of a new technology, namely, the latest-generation television (TV), or the organic light-emitting diode (OLED) TV. We elaborate three possible scenarios, and forecast the market share of OLED TV and four other TV technologies in the global market over the next 10 years: cathode ray tube, rear projection, plasma display panel, and liquid crystal display.

The replacement of older generation technological products with the newer generation ones is common in the high-technology sector. To better understand and describe the process, Norton and Bass [1] developed a multi-generation diffusion model which became a popular forecasting method in the field. However, in the consumer electronics industry, the Norton and Bass [1] diffusion model is inappropriate for forecasting and analysis because the generational replacement is not always a clear-cut process. In such industries, older-generation products often coexist in the market with latest-generation products, and more than one new product may enter the market at or around the same time. Fisher and Pry [2] proposed the technological substitution model in 1971, which analyzes the penetration process of new-generation technologies replacing old ones. Marchetti and Nakicenovic [3] expanded this model [2] to deal with the multi-generation and multi-products condition. A more comprehensive description of the model and assumptions has been given by Nakicenovic [4]. By building upon previous studies, Versluis [5] proposed another substitution model that was concerned with the maximum attainable market share. He assumed that it is possible to end up in a state of equilibrium where all the technologies have found their place according to their relative competitive power. However, these two models are often limited by a relative lack of data on the latest-generation technology. Scenario analysis, an important prediction method since the 1960s, is another method commonly employed to understand future developments. It is used to outline some aspects of the future world by telling stories to emphasize the important dimensions and incorporated uncertainties [6]. It is used in many areas such as energy [7], hydrogen fueling systems [8] and biotechnology [9]. While scenario analysis presents rich and complex portraits of possible future scenarios, it fails to provide quantifiable forecasts [10]. Therefore, Wang and Lan [11] combined scenario analysis (to address an uncertain future) with the technological substitution model (a quantitative method) to analyze the development of new-generation technologies. In conducting the scenario analysis, researchers commonly collected the opinions of experts in the field to generate scenarios. However, there are often large variations among expert opinions. To deal with the diversity of expert opinions, the Delphi technique was developed during the 1950s by workers at the RAND Corporation. It is a procedure used to obtain the most reliable consensus of opinions of a group of experts by a series of intensive questionnaires interspersed with controlled opinion feedback [12]. Therefore, some studies combined scenario analysis with Delphi to generate future scenarios [13] and [14]. However, these scenarios still cannot provide clear, quantified information such as the forecasted market share of the new technology. Therefore, we have combined scenario analysis with the Delphi method and the technological substitution model to analyze the development of a new technology, namely, the latest-generation television (TV), or the organic light-emitting diode (OLED) TV. In a departure from most of the studies that combine the scenario and Delphi approaches, we went through the whole scenario building process with the assistance of the Delphi method. Thus, the Delphi method helps to clarify the planning of the scenario building process. In addition, we used the substitution model to generate market share information with a view to assisting in the decision making. In short, such a three-method combination provides researchers with a more holistic and hopefully reliable picture of the future developments. It provides us with the advantages of three methods; that is, we can obtain qualitative scenarios that are developed with the assistance of a consensus of experts while obtaining the quantitative information desired in forecasting. Since the introductions of black-and-white and color cathode ray tube (CRT) TVs in 1928 and 1951 [15], respectively, CRT TVs have become commonplace in households throughout the world. However, they are big, bulky, and heavy, and use radiation to display images on the screen. These disadvantages, in combination with the advent of digital broadcasting in 1988 [15], led to a movement from analog to digital TVs. Many digital services are now available, but often require large, high-definition displays. This has triggered a high demand for flat panel display (FPD) TVs, such as rear projection (RP), plasma display panel (PDP), and liquid crystal display (LCD) TVs, which are starting to replace CRT TVs in the market. Each technology has specific advantages and disadvantages; however, all of these alternatives offer a large display screen in a small space and employ substantially less radiation. LCDs in particular are light, thin, long-lived, available in a range of sizes, higher resolution than comparably sized plasmas, and bright; they also use little power and radiation, poses no danger of screen burn-in, and accepts digital signals. For these reasons, it has become the mainstream TV technology in 2007. According to a report by the market research company DisplaySearch [16], global shipments of LCDs in 2007 were almost 200 million units worldwide, accounting for 46.7% of the worldwide market. For comparison, CRTs, PDPs, and RPs made up 45.7%, 6.6%, and 1% of the market share, respectively. Organic light emitting diode (OLED) TVs were introduced by Sony Corporation in December 2007, and quickly became the preferred display technology among scholars and analysts. The display employs organic electro-luminescence and starts at a size of only 11 in. Many other large manufacturers have already embraced OLED technology, however, their production is still limited, as are the materials necessary to manufacture them and mass production technologies. Under such a competitive environment, it is uncertain whether or not OLED TVs will overcome this technical bottleneck to become the new leader in the TV industry. Therefore, this study applied the three market analysis methods mentioned above to forecast the market share of OLED TVs in the world market over the next 10 years. The remainder of this paper is organized as follows. Section 2 reviews the methodology of scenario analysis, the important equations of the technological substitution model, and the Delphi method. Section 3 describes the proposed process of combining these three forecasting methods. Section 4 describes the TV industry in further detail. Section 5 illustrates the combined forecast process using the development of OLED technology and its hypothetical penetration into the market as an example. Finally, Section 6 summarizes the conclusions.

We combined scenario analysis, the technological substitution model, and the Delphi method to analyze the development of a new-generation technology, namely OLED TV, and demonstrated the usefulness of this combined approach. We analyzed the evolution of its global market share, relative to four other TV technologies (CRT, LCD, RP, and PDP) over the next decade from three perspectives: consumer demand and preference, TV technology development, and government policies and manufacturer strategies. We applied scenario analysis first, to avoid overlooking important or extreme situations, then carefully identified the key decision factors and key driving forces and selected axes of uncertainty that affect the development of the TV industry. These processes helped develop the possible future scenarios of the TV industry. The Delphi method was applied to converge the opinions of a panel of experts about the likelihood of each scenario and establish three scenario categories: the most optimistic (stable growth), the most pessimistic (low penetration), and the most likely (niche). The Marchetti and Nakicenovic [3] logistic model was used to examine the market share of each display technology. The results are summarized in Table 7. The results indicated that LCDs will remain the dominant technology over the next decade, while the market share of the OLED TV under the most likely scenario will be 9.49%. Moreover, our proposed model uses scenario analysis and the Delphi method to perform the first and second stages of the analysis. Therefore, the proposed model has the strengths of both methods; that is, it can manage the uncertainty, consider the dynamic change in the environment (from scenario analysis) and provides decision makers with focused views of the future (the Delphi method). Meanwhile, our model uses the technological substitution model to model both the trajectory of the new technology and the development of the old technologies to obtain the forecasted market share information of different scenarios. As a result, our model provides enterprises with more information for decision making in the face of the technological transition described before. Given that the technological substitution model forms the basis of the analysis, our proposed model is also suitable for long-term forecasting, especially when multi-generation technologies are under consideration. We employed the Marchetti and Nakicenovic [3] logistic model in this paper, future researchers may consider using other technological substitution models to compare forecasting performance.