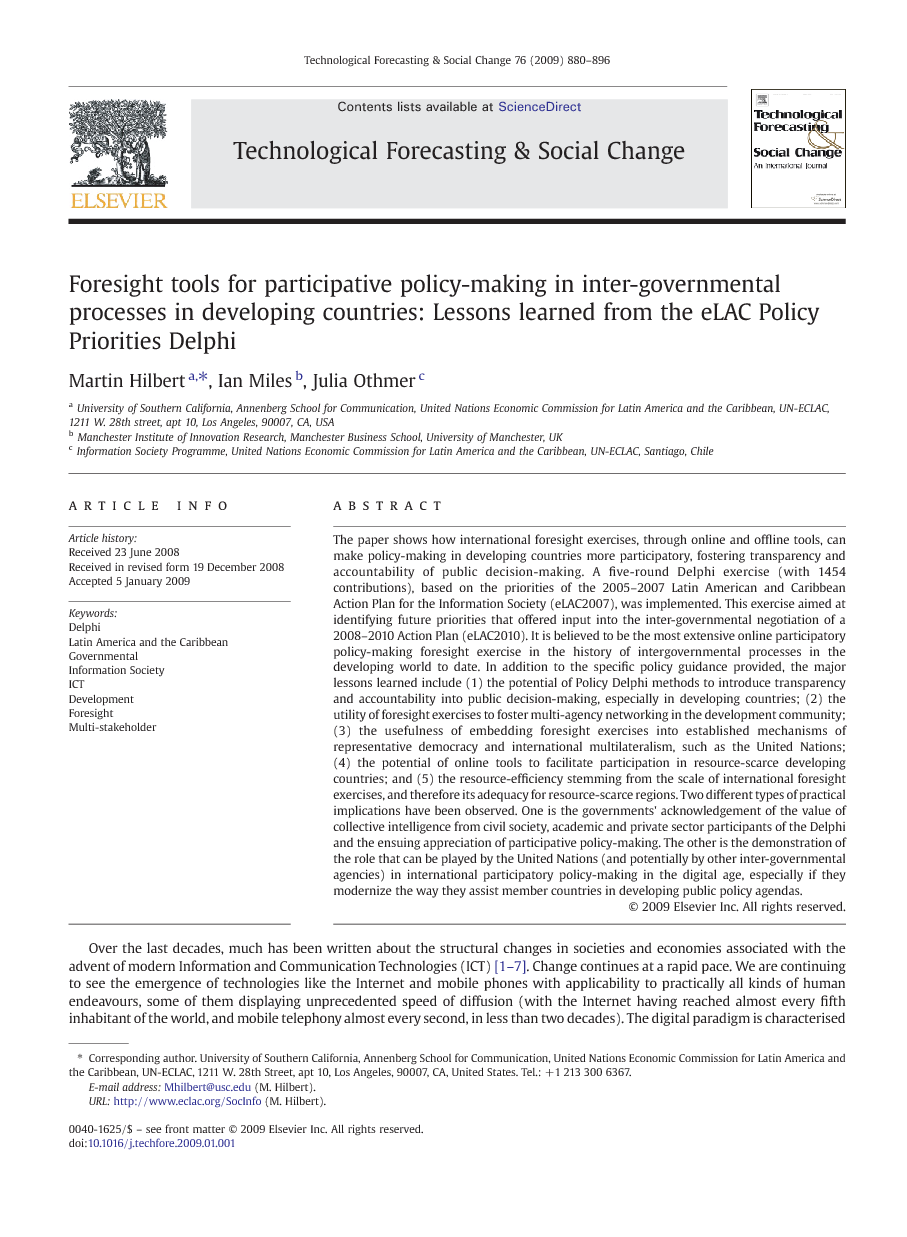 The paper shows how international foresight exercises, through online and offline tools, can make policy-making in developing countries more participatory, fostering transparency and accountability of public decision-making. A five-round Delphi exercise (with 1454 contributions), based on the priorities of the 2005–2007 Latin American and Caribbean Action Plan for the Information Society (eLAC2007), was implemented. This exercise aimed at identifying future priorities that offered input into the inter-governmental negotiation of a 2008–2010 Action Plan (eLAC2010). It is believed to be the most extensive online participatory policy-making foresight exercise in the history of intergovernmental processes in the developing world to date. In addition to the specific policy guidance provided, the major lessons learned include (1) the potential of Policy Delphi methods to introduce transparency and accountability into public decision-making, especially in developing countries; (2) the utility of foresight exercises to foster multi-agency networking in the development community; (3) the usefulness of embedding foresight exercises into established mechanisms of representative democracy and international multilateralism, such as the United Nations; (4) the potential of online tools to facilitate participation in resource-scarce developing countries; and (5) the resource-efficiency stemming from the scale of international foresight exercises, and therefore its adequacy for resource-scarce regions. Two different types of practical implications have been observed. One is the governments' acknowledgement of the value of collective intelligence from civil society, academic and private sector participants of the Delphi and the ensuing appreciation of participative policy-making. The other is the demonstration of the role that can be played by the United Nations (and potentially by other inter-governmental agencies) in international participatory policy-making in the digital age, especially if they modernize the way they assist member countries in developing public policy agendas.

Over the last decades, much has been written about the structural changes in societies and economies associated with the advent of modern Information and Communication Technologies (ICT) [1], [2], [3], [4], [5], [6] and [7]. Change continues at a rapid pace. We are continuing to see the emergence of technologies like the Internet and mobile phones with applicability to practically all kinds of human endeavours, some of them displaying unprecedented speed of diffusion (with the Internet having reached almost every fifth inhabitant of the world, and mobile telephony almost every second, in less than two decades). The digital paradigm is characterised by fast innovation cycles and accelerating technological progress. These factors have led to a high level of uncertainty concerning the options for, and implications of, this technological change. At a global level, the problem of the digital divide and prospects of digital opportunities for development have been underlined at the highest possible political levels, during the two phases of the United Nations' World Summit on the Information Society1 (WSIS) in Geneva in 2003 and Tunis in 2005. This globally approved policy agenda spans a variety of subjects and sets goals to be worked on by the international community between 2005 and 2015. Latin American and Caribbean (LAC) countries have responded to this global challenge by identifying the most urgent and important short-term policy goals for the region. The result was a selection of thirty areas of interest and seventy concrete goals to be implemented during 2005–2007, through a plan dubbed eLAC20072. This Regional Action Plan for the Information Society was approved at the Regional Preparatory Ministerial Conference of Latin America and the Caribbean for the second phase of the World Summit on the Information Society, in Rio de Janeiro from 8–10 June 20053, and was seen as a first partial step towards the goals for 2015. The plan's purpose is to mediate between the ambitious goals of the global agenda, and the local demands of individual countries of the region, by identifying common regional priorities. The plan's nature is a short-term. Accelerating technological progress, proliferating applications, and the related uncertainty in this field of development, have forced policy-makers to opt for a short-term approach of no more than two or three years, allowing for continuous revision and adjustment to constantly changing challenges4. The logic applied here calls for a series of consecutive short-term Action Plans in order to implement the long-term vision until 2015. During the execution of eLAC2007, significant advancements have been observed in the development of Information Societies in Latin America and the Caribbean [9], while at the same time an increased level of policy activity could be evidenced [10]. As a result, countries and international organizations evaluated the plan as a success [11] and decided to start the discussion about future priorities concerning the effective usage of ICT to tackle pending challenges in the LAC development agenda. The promises of effective ICT usage are multifaceted. These promises include economic growth and productivity, social inclusion, the modernization of public administration, education and health sectors, security and disaster management, cultural development, and many potentials. The Information Society Programme of the United Nations' Economic Commission for Latin America and the Caribbean (UN-ECLAC), acted as the technical secretariat for the Regional Action Plan eLAC2007. In response to the task of elaborating a new regional agenda for the year 2010, the Programme elaborated the “eLAC Policy Priorities Delphi”. The exercise aimed to identify public policy priorities and strategic policy alternatives regarding the use of ICT for development in the LAC region, for the period between 2008 and 2010. It did so by systematically collecting, and analyzing information so as to provide results that can help to improve the quality of policy choices made in a public policy agenda. The Delphi policy process was conducted between April 2006 and February 2008, with the report of the Delphi exercise being used as an input for the new 2008–2010 Regional Action Plan eLAC2010. (A short description of the inter-governmentally approved eLAC2010 Action Plan can be found in the left-hand columns of the Appendix to this paper, which also provides a general overview of the different topics and thematic areas on the agenda an Action Plan for the development of Information Societies). Below we review this participatory exercise and highlight the lessons learned. It starts with a summary of particularities to consider when working on regional-level agenda-building on such a dynamic and cross-cutting topic as ICT in developing regions. It then presents the Delphi policy process, before drawing conclusions as to the conduct of foresight and participatory policy-making exercises, in developing countries and more generally.