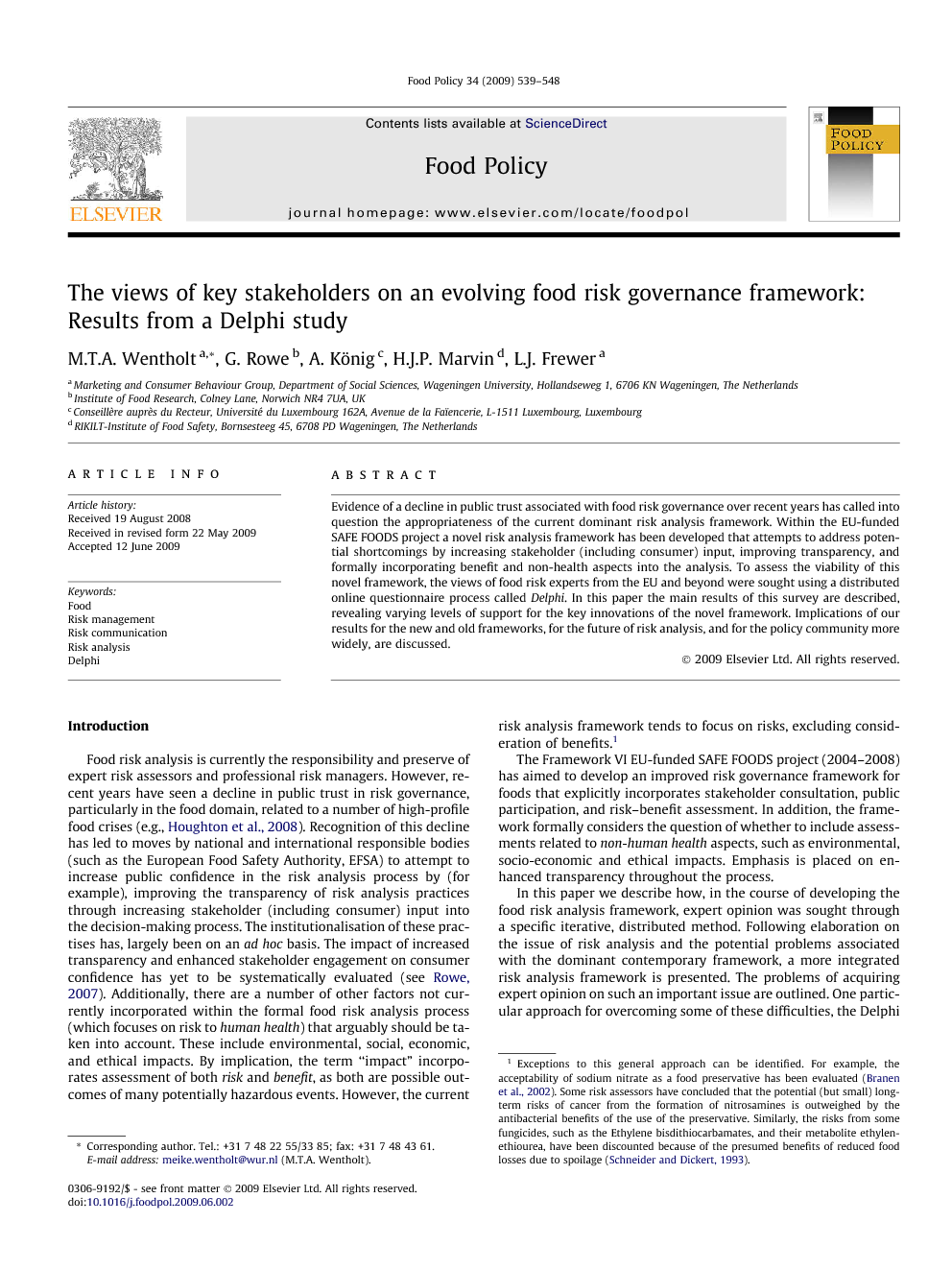 Evidence of a decline in public trust associated with food risk governance over recent years has called into question the appropriateness of the current dominant risk analysis framework. Within the EU-funded SAFE FOODS project a novel risk analysis framework has been developed that attempts to address potential shortcomings by increasing stakeholder (including consumer) input, improving transparency, and formally incorporating benefit and non-health aspects into the analysis. To assess the viability of this novel framework, the views of food risk experts from the EU and beyond were sought using a distributed online questionnaire process called Delphi. In this paper the main results of this survey are described, revealing varying levels of support for the key innovations of the novel framework. Implications of our results for the new and old frameworks, for the future of risk analysis, and for the policy community more widely, are discussed.

Food risk analysis is currently the responsibility and preserve of expert risk assessors and professional risk managers. However, recent years have seen a decline in public trust in risk governance, particularly in the food domain, related to a number of high-profile food crises (e.g., Houghton et al., 2008). Recognition of this decline has led to moves by national and international responsible bodies (such as the European Food Safety Authority, EFSA) to attempt to increase public confidence in the risk analysis process by (for example), improving the transparency of risk analysis practices through increasing stakeholder (including consumer) input into the decision-making process. The institutionalisation of these practises has, largely been on an ad hoc basis. The impact of increased transparency and enhanced stakeholder engagement on consumer confidence has yet to be systematically evaluated (see Rowe, 2007). Additionally, there are a number of other factors not currently incorporated within the formal food risk analysis process (which focuses on risk to human health) that arguably should be taken into account. These include environmental, social, economic, and ethical impacts. By implication, the term “impact” incorporates assessment of both risk and benefit, as both are possible outcomes of many potentially hazardous events. However, the current risk analysis framework tends to focus on risks, excluding consideration of benefits.1 The Framework VI EU-funded SAFE FOODS project (2004–2008) has aimed to develop an improved risk governance framework for foods that explicitly incorporates stakeholder consultation, public participation, and risk–benefit assessment. In addition, the framework formally considers the question of whether to include assessments related to non-human health aspects, such as environmental, socio-economic and ethical impacts. Emphasis is placed on enhanced transparency throughout the process. In this paper we describe how, in the course of developing the food risk analysis framework, expert opinion was sought through a specific iterative, distributed method. Following elaboration on the issue of risk analysis and the potential problems associated with the dominant contemporary framework, a more integrated risk analysis framework is presented. The problems of acquiring expert opinion on such an important issue are outlined. One particular approach for overcoming some of these difficulties, the Delphi technique, is described. The SAFE FOODS Delphi consultation process is then outlined, and selected results are presented. The views of interested actors and stakeholders regarding the advantages and disadvantages of the framework are provided, together with views on its further development, along with commentary on the usefulness and limitations of the Delphi research method

There was considerable support for many of the new principles encompassed by the SAFE FOODS framework, but some uncertainty was expressed regarding how, in practice, these might be enacted. For example, there was some discussion regarding how stakeholders should be involved, the appropriate methodological approaches required to measure risks and benefits associated with the different impact factors (including health), and how these different factors should be weighted in the risk analysis process. The results from this survey raise further questions regarding the operationalisation of the framework, though they do suggest that it is worth persevering with. It would be naïve to expect that a ‘better’ framework will necessarily supplant one already institutionalised unless there is considerable stakeholder and end-user acceptance of the new approach. A final conclusion relates to the difference between stakeholder acceptance and institutional implementation and harmonisation in institutional application. It is also clear that a guidance is needed regarding when to do what (for example, in the framing phase stakeholders will profile the problem hence determine what activities are needed to solve the specific problem at hand). The issue of implementation lies, therefore, less with regulatory acceptance, but rather with operationalising specific institutional activities.