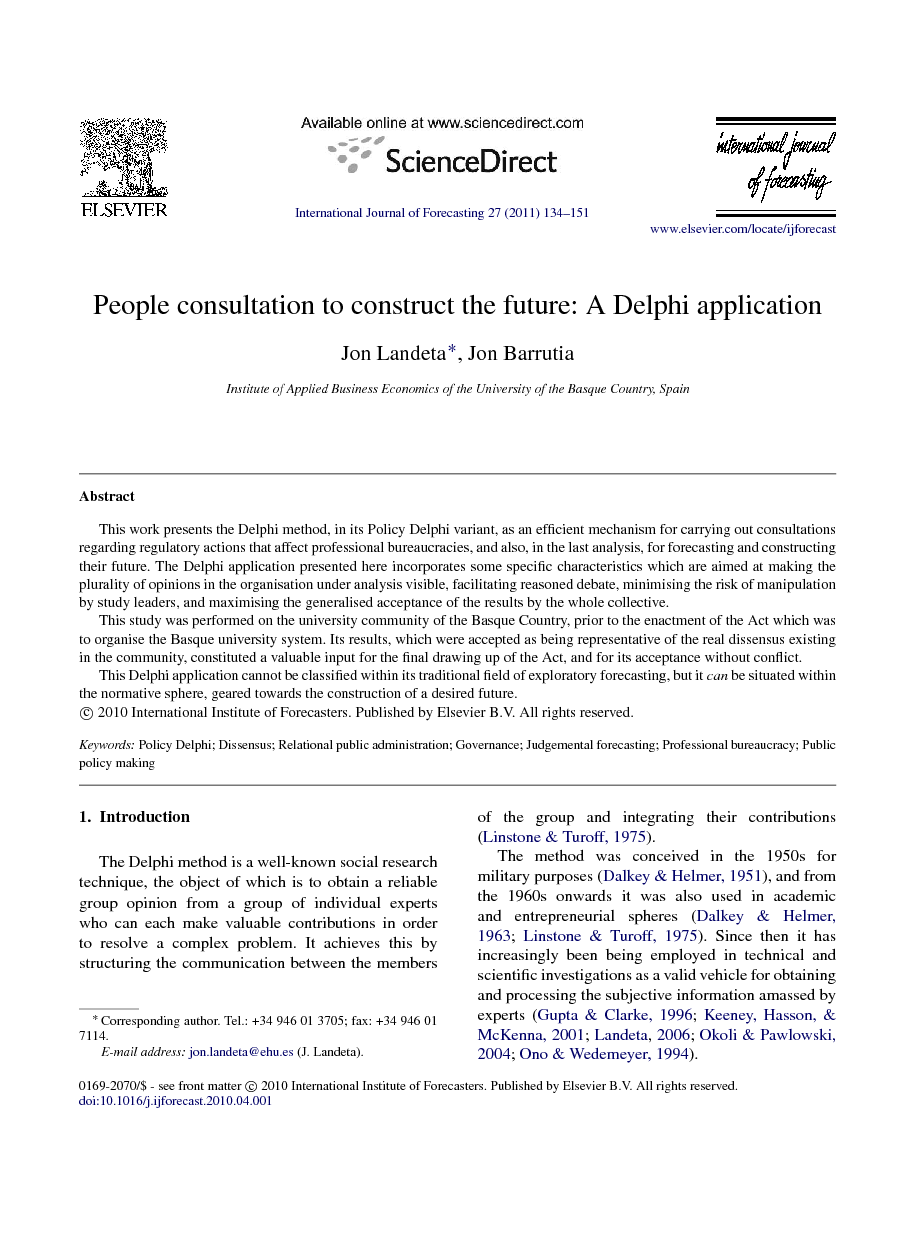 This work presents the Delphi method, in its Policy Delphi variant, as an efficient mechanism for carrying out consultations regarding regulatory actions that affect professional bureaucracies, and also, in the last analysis, for forecasting and constructing their future. The Delphi application presented here incorporates some specific characteristics which are aimed at making the plurality of opinions in the organisation under analysis visible, facilitating reasoned debate, minimising the risk of manipulation by study leaders, and maximising the generalised acceptance of the results by the whole collective. This study was performed on the university community of the Basque Country, prior to the enactment of the Act which was to organise the Basque university system. Its results, which were accepted as being representative of the real dissensus existing in the community, constituted a valuable input for the final drawing up of the Act, and for its acceptance without conflict. This Delphi application cannot be classified within its traditional field of exploratory forecasting, but it can be situated within the normative sphere, geared towards the construction of a desired future.

The Delphi method is a well-known social research technique, the object of which is to obtain a reliable group opinion from a group of individual experts who can each make valuable contributions in order to resolve a complex problem. It achieves this by structuring the communication between the members of the group and integrating their contributions (Linstone & Turoff, 1975). The method was conceived in the 1950s for military purposes (Dalkey & Helmer, 1951), and from the 1960s onwards it was also used in academic and entrepreneurial spheres (Dalkey and Helmer, 1963 and Linstone and Turoff, 1975). Since then it has increasingly been being employed in technical and scientific investigations as a valid vehicle for obtaining and processing the subjective information amassed by experts (Gupta and Clarke, 1996, Keeney et al., 2001, Landeta, 2006, Okoli and Pawlowski, 2004 and Ono and Wedemeyer, 1994). The method has been used continuously since its introduction, principally as a technique for prediction and consensus in contexts of uncertainty, in situations where it is not possible to have recourse to other techniques which are based on objective information. Long-term technological, economic or social forecasting, the hierarchisation of objectives or social alternatives, and the supply of quantitative models and their growing application within the framework of health research can all be categorised within this objective (Cramer et al., 2008 and Landeta, 2006). The Delphi method has also been used, to a lesser degree, as an instrument for consultation and participation, geared towards securing the involvement and participation of individuals who are affected by a particular situation or problem in their solution processes (Buck et al., 1993, Fedor and Pavol, 1987, Landeta, 2002 and Turoff, 1970). This line, the origin of which lies in Turoff’s Policy Delphi (Turoff, 1970), opens the way for applications which are aimed more at becoming acquainted with and exploring different existing positions in relation to a complex problem (dissensus) than at arriving at a consensus or single opinion. In this case, the successful execution of a Delphi exercise of these characteristics calls for the incorporation of specific measures and precautions, to guarantee the quality and acceptance of the process and its result by the participating group of experts and those they represent. These measures are assumed to be particularly necessary when there is great knowledge, autonomy, tension and power accumulated by the collective under consultation. This occurs, for instance, in professional bureaucracies, and generally in normative, politically charged, and pressing decision-making contexts. A professional bureaucracy is an organisation which relies on the standardisation of knowledge and skills, rather than on processes, and which has a highly decentralised and autonomous structure, where the professionals work with a great deal of independence and are essential to the organisation, because they occupy positions from the operational to the strategic spectrum, and because they are the ones who control selection and training, and therefore wield great power (Mintzberg, 1984 and Mintzberg and Rose, 2003). The Delphi proposal we present in this work is tailored to this purpose and to this kind of collective and context. We adjusted the characteristics of the Delphi method to meet our objectives and employed it as an instrument for consulting a university community, prior to the enactment of an act for organising the university. While decisions within the university field have often been made based on this technique (Judd, 1972, Kruss, 1983 and Wright, 2006), we have no evidence of other cases where the technique has been used as the basis for a social consultation process prior to the drawing up of a law of this nature and reach. By the autumn of 2002, this Delphi consultation had obtained its results, which were a core input for the ensuing dynamics of the political, administrative, parliamentary and negotiating processes. On 25 February, 2004, the plenary of the Basque Parliament passed the University Organisation Act for the Autonomous Community of the Basque Country, which is still being developed, producing effects that can readily be perceived by both the university community and society (bonuses, autonomous evaluation agency, researcher posts, etc.).1 In our opinion, the Delphi application that we present constituted an efficient vehicle for constructing the future that was desired: the passing of a quality university act, which was accepted and approved without conflict. In consequence, this article presents a modified Policy Delphi proposal which is appropriate for use in pressing decision-making contexts as an instrument for consultation and participation concerning professional bureaucracies; that is to say, collectives with a high degree of autonomy and professional power. In short, the problem is to demonstrate the capacity of this technique to construct a desired future by forecasting the behaviour of the “administered” through the facilitation of social debate, and by capturing, as well as possible, the sensibilities, opinions and interests of the social agents who are most involved or most affected by a change that is about to be introduced. This must be achieved within a relatively short time and must minimise the risk of conflict, both during the consultation process and after the change has been brought about.

Finally, based on the theoretical approach presented and its practical application to the case set out, we can put forward the following conclusions. 1. The dissensus-oriented Policy Delphi is an efficient method of consultation and forecasting for use by public decision-makers in the design and acceptance of regulations for professional bureaucracies. 2. Its effectiveness fundamentally lies in: – maximising the perceptions of the professional bureaucracy as to the importance and effectiveness of its participation; – minimising the possibility of the organisation perceiving any risk of the interested manipulation of their contributions by the administration or the study leaders; – adjusting its execution to the moment of maximum influence of the result on the effective devising of the regulations; and – the fact that the panel of experts is composed of individuals who are noted for their knowledge and leadership of the collective affected, which increases the likelihood of a positive impact on the social forecast which is employed as the basis for decision making. 3. The dissensus-oriented Policy Delphi, when it is applied rigorously and incorporates the additional characteristics necessary for it to be employed efficiently in professional bureaucracies, provides: – a high degree of participation, in both quantity and quality, from the professionals affected, which causes them to have proactive attitudes; – a reasoned, quantified knowledge of the variety of opinions that coexist in the organisation; –a visualisation of the final scenario sought by the actors as a whole; – the taking of decisions or the formulation of high quality regulations by the Public Administration within the current contexts of governance, because they are implemented in line with the information, reasonings and lines of action provided by genuine experts in the subject, who are also affected by their development; – the facilitation of conditions so that the professional bureaucracy is willing to accept the consequences of the results of the study; and – the minimisation of the risk of conflict emerging from the actual consultation process and from the drawing up and application of the regulations in question. 4. The consultation processes used in the dissensus-oriented Policy Delphi are appropriate for use by public decision-makers who want to act upon professional bureaucracies in accordance with the principles of Relational Public Administration, especially in contexts in which there is a high risk of conflict. This conclusion is intensified if, in addition, the general context of action presents structural difficulties (situations of parliamentary weakness, an asymmetric distribution of competences, etc). 5. The dissensus-oriented Policy Delphi, when employed following the due precautions, can be a valid instrument for predicting future socio-political situations in a community through the subjective judgements of a sample of its members. It is an effective and efficient method of social forecasting in situations of conflict. 6. Consequently, through the logic of transferability, we consider the Policy Delphi designed for this public action to be a valid one for carrying out other consultations, simultaneously with predictions, within similar contexts and with similar objectives and collectives, and thus, for helping to construct a desired future.