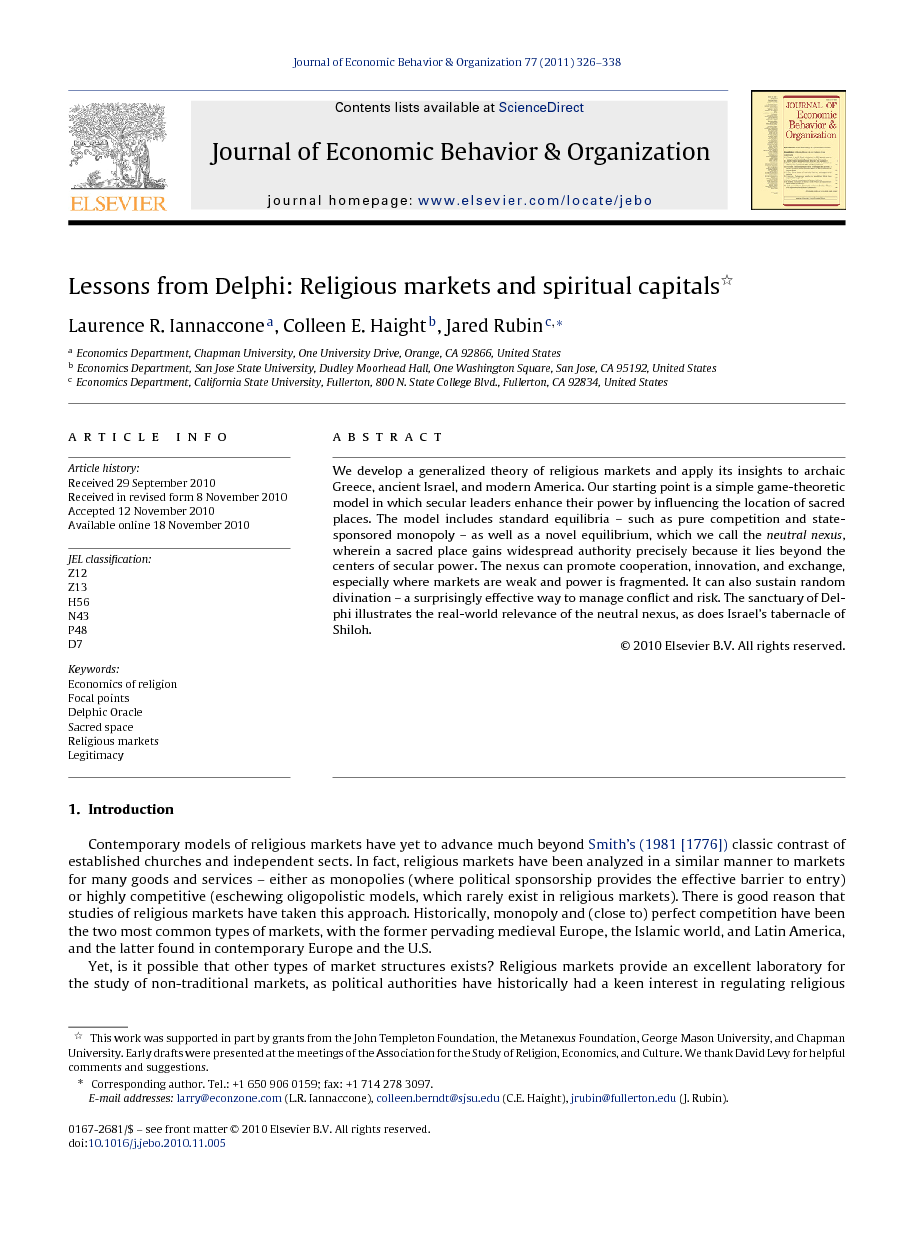 We develop a generalized theory of religious markets and apply its insights to archaic Greece, ancient Israel, and modern America. Our starting point is a simple game-theoretic model in which secular leaders enhance their power by influencing the location of sacred places. The model includes standard equilibria – such as pure competition and state-sponsored monopoly – as well as a novel equilibrium, which we call the neutral nexus, wherein a sacred place gains widespread authority precisely because it lies beyond the centers of secular power. The nexus can promote cooperation, innovation, and exchange, especially where markets are weak and power is fragmented. It can also sustain random divination – a surprisingly effective way to manage conflict and risk. The sanctuary of Delphi illustrates the real-world relevance of the neutral nexus, as does Israel's tabernacle of Shiloh.

Contemporary models of religious markets have yet to advance much beyond Smith's (1981 [1776]) classic contrast of established churches and independent sects. In fact, religious markets have been analyzed in a similar manner to markets for many goods and services – either as monopolies (where political sponsorship provides the effective barrier to entry) or highly competitive (eschewing oligopolistic models, which rarely exist in religious markets). There is good reason that studies of religious markets have taken this approach. Historically, monopoly and (close to) perfect competition have been the two most common types of markets, with the former pervading medieval Europe, the Islamic world, and Latin America, and the latter found in contemporary Europe and the U.S. Yet, is it possible that other types of market structures exists? Religious markets provide an excellent laboratory for the study of non-traditional markets, as political authorities have historically had a keen interest in regulating religious authorities. And indeed, this paper suggests that the literature on religious markets – and the broader literature on market structures in general – has “missed” an equilibrium. Using a simple game theoretic model, we analyze the situation in which numerous political authorities are legitimized by religious actors who are geographically disparate. Our model is able to capture the classic monopoly and perfect competition cases – the former may emerge when one ruler is powerful enough (and all leaders visit the religious site in his territory) and the latter can emerge when the cost of coercion of the citizenry is sufficiently large and the ruler does not attempt to co-opt religious authority. The model also sheds light on the conditions under which a third type of equilibrium, which we call the neutral nexus, emerges. This equilibrium involves spiritual “capitals” arising in places beyond all centers of secular power. We suggest that this is an equilibrium precisely because the spiritual location is not dominated by secular power. This type of equilibrium can emerge when a cluster of polities share a common culture and close ties and no one political authority dominates. The positive network externalities associated with an independent legitimizing force allow the neutral religious player to thrive despite the fact that it is not loyal to any one political authority. The sanctuary of Delphi in ancient Greece illustrates the neutral nexus. Delphi also helps us better understand the economic and political roles of religious institutions in pre-market societies. The vast network of shrines and sanctuaries in ancient Greece seem to have substituted for the invisible hand of modern markets – strengthening Greek identity, limiting political conflict, and promoting inter-state cooperation, communication, and exchange. More generally, it sheds light on a market structure different from the types studied in introductory economics classes – one that served the Greeks quite well for centuries.

The economics of religion has grown rapidly in recent years, but thinking on religious markets has yet to advance much beyond Adam Smith's analysis of monopoly churches and competing sects. We have identified a third market structure, distinct from both European-style monopoly and American-style competition. Our analysis began with a simple model of sacred space. Because all places are potentially sacred 31 the actual location of major shrines and sanctuaries is largely determined by social, political, and economic conditions. Thus the central problem of sacred geography is coordination rather than inspiration. When sacred and secular powers interact, the most common result is a marriage of church and state. The dominant religious center moves to the political center, or vice versa, and each supports the other. We observe this market structure across Europe in the era of established churches and in the vast majority of empires, kingdoms, and centralized states throughout history. A radically different equilibrium emerges when sacred and secular powers occupy separate spheres and religious firms compete freely. The United States has been a leading example of this market structure for most of two centuries. A third equilibrium emerges in some “peer polity” cultures – most notably those of ancient Greece and early Israel. The key component in this structure is a shared sacred capital, separate from all centers of secular power. The extraordinary achievements of the Greek city-states testify to the potential power of this neutral nexus – a power that resides in the nature of the network itself, rather than the presumed character of gods or precise content of rituals. Divination is one of the more valuable products of such systems, especially when it serves to resolve conflict in a manner that is both random and authoritative. All this is good news, not only for the economics of religion but also for economics in general. In macro, micro, history, and (especially) development, contemporary economics continually confronts beliefs, institutions, and culture. But our methods are not well suited to outcomes that depend critically upon precise content beliefs, the unique character of institutions, and the specific components of culture. Our study of sacred space strongly affirms the value of simple models, abstract ideas, and general methods. We thus advance toward the goal envisioned by Chwe (2001, pp. 96, 99) in his closing comments on rational rituals: “The explicit application of game theory to symbolic action and culture … should not be considered a diversion or a side application but rather a necessary step in game theory's own internal agenda. … [In] pursuing the logical consequences of ‘material’ rationality, game theory finds culture.”