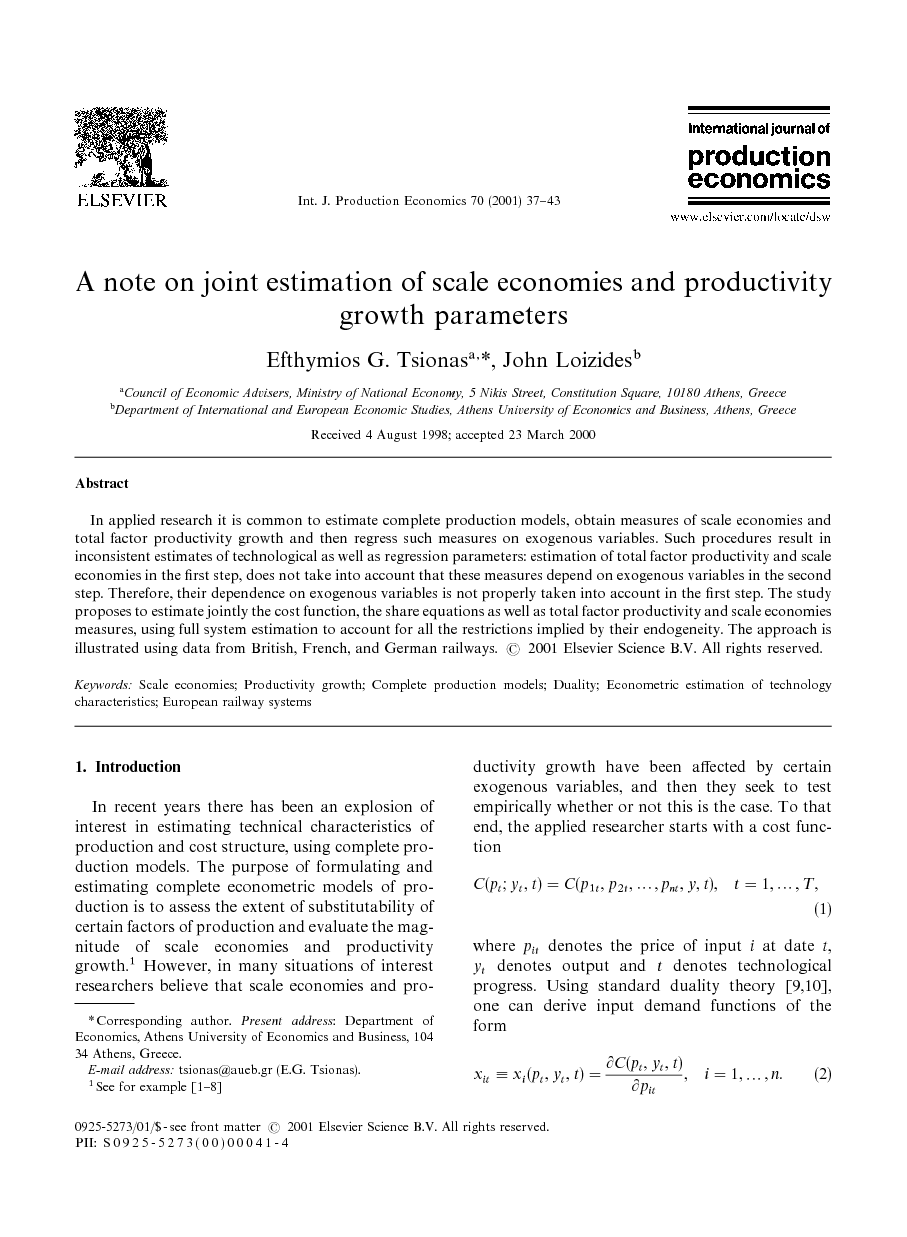 In applied research it is common to estimate complete production models, obtain measures of scale economies and total factor productivity growth and then regress such measures on exogenous variables. Such procedures result in inconsistent estimates of technological as well as regression parameters: estimation of total factor productivity and scale economies in the first step, does not take into account that these measures depend on exogenous variables in the second step. Therefore, their dependence on exogenous variables is not properly taken into account in the first step. The study proposes to estimate jointly the cost function, the share equations as well as total factor productivity and scale economies measures, using full system estimation to account for all the restrictions implied by their endogeneity. The approach is illustrated using data from British, French, and German railways.

In recent years there has been an explosion of interest in estimating technical characteristics of production and cost structure, using complete production models. The purpose of formulating and estimating complete econometric models of production is to assess the extent of substitutability of certain factors of production and evaluate the magnitude of scale economies and productivity growth.1 However, in many situations of interest researchers believe that scale economies and productivity growth have been affected by certain exogenous variables, and then they seek to test empirically whether or not this is the case. To that end, the applied researcher starts with a cost function In (5), α and β denote coefficient estimates, v1t, v2t denote error terms and a hat denotes evaluation at the final IZEF estimates. A popular way to estimate the practical importance of certain quantitative and qualitative variables on the level of technical efficiency is to estimate first a technical efficiency index from the residuals of a production function, which includes as exogenous variables some basic inputs of production2 (capital, labor, energy, land, fertilizer, etc., see for example [11], [12] and [13] among others) and second to regress technical efficiency or productivity growth on such variables as education, farm assets, credit, etc. The argument has been advanced (e.g. [14]) that although it would be more meaningful to include such variables as formal inputs in the production function, this would be undesirable because it raises some conceptual problems regarding substitutability: For example, it makes no sense to argue that there is substitution between fertilizer and education – in an agricultural economics context, or between average trip length and labor – in a railway economics context. For that reason, there is considerable incentive for defending the “regression approach”. However, there is little reason to support the two-step approach that is commonly used in the literature. In fact, the two-step approach suffers from several problems: (i) Regressions like (5) ignore parameter uncertainty and simply compute the dependent variable at the final estimates, without taking proper account of their variability. As a matter of fact, these regressions ignore the fact that TFP or SE have been computed in the first round, under the assumption that they do not depend on exogenous variables, i.e. that they are strictly exogenous variables. In the second round, however, this assumption is (silently) violated. (ii) Regressions like (5) are problematic because they introduce additional variables zt into the problem in an ad hoc manner. Formally, variables in zt should enter (1) as inputs, however, in that case one would have substitution between zt and the existing inputs (unless variables in zt enter as fixed factors in the short run). This may not always be a reasonable approach to the problem. Also, (5) is problematic because it does not have a direct interpretation. (iii) Regressions (5) in conjunction with (3) and (4) suggest that prices or output are endogenous and should depend on zt. If that is the case, joint estimation of (1) and (2) by IZEF will yield inconsistent results, and the same is true for OLS applied to (5). A way out of these problems is to estimate (1) and (2) jointly with (3) and (4). In general, (3) and (4) are functions of prices, output, time and the structural parameters of the cost function, so joint estimation introduces additional restrictions (on top of homogeneity, symmetry, etc.) on structural parameters imposed by the endogeneity of TFP and SE.

The paper provided a practical way to incorporate total factor productivity growth (TFP) and scale economies’ (SE) equations in a complete cost function – share equation system and examine – in a formal and consistent way – their dependence on exogenous variables. Such systems can be estimated using NL3S. This approach is a consistent alternative to the traditional practice of estimating cost functions and share equations, computing TFP and SE at FIML or IZEF parameter estimates and regressing them on exogenous variables using OLS. The latter approach suffers from several econometric problems, including inconsistency of parameter estimates due to simultaneity biases. In an empirical application that involved productivity measurement and SE in three European railways (French, German and British) the study documented significant differences in the way exogenous variables have affected TFP and SE. The traditional approach implied statistically significant parameters of TFP and SE regressions on electrification. On the contrary, the approach developed in the present paper showed that this is an artifact. The proposed approach can be useful in several fields, including agricultural applied economics where the problem of determinants of productivity growth and scale economies arises on a routine basis.