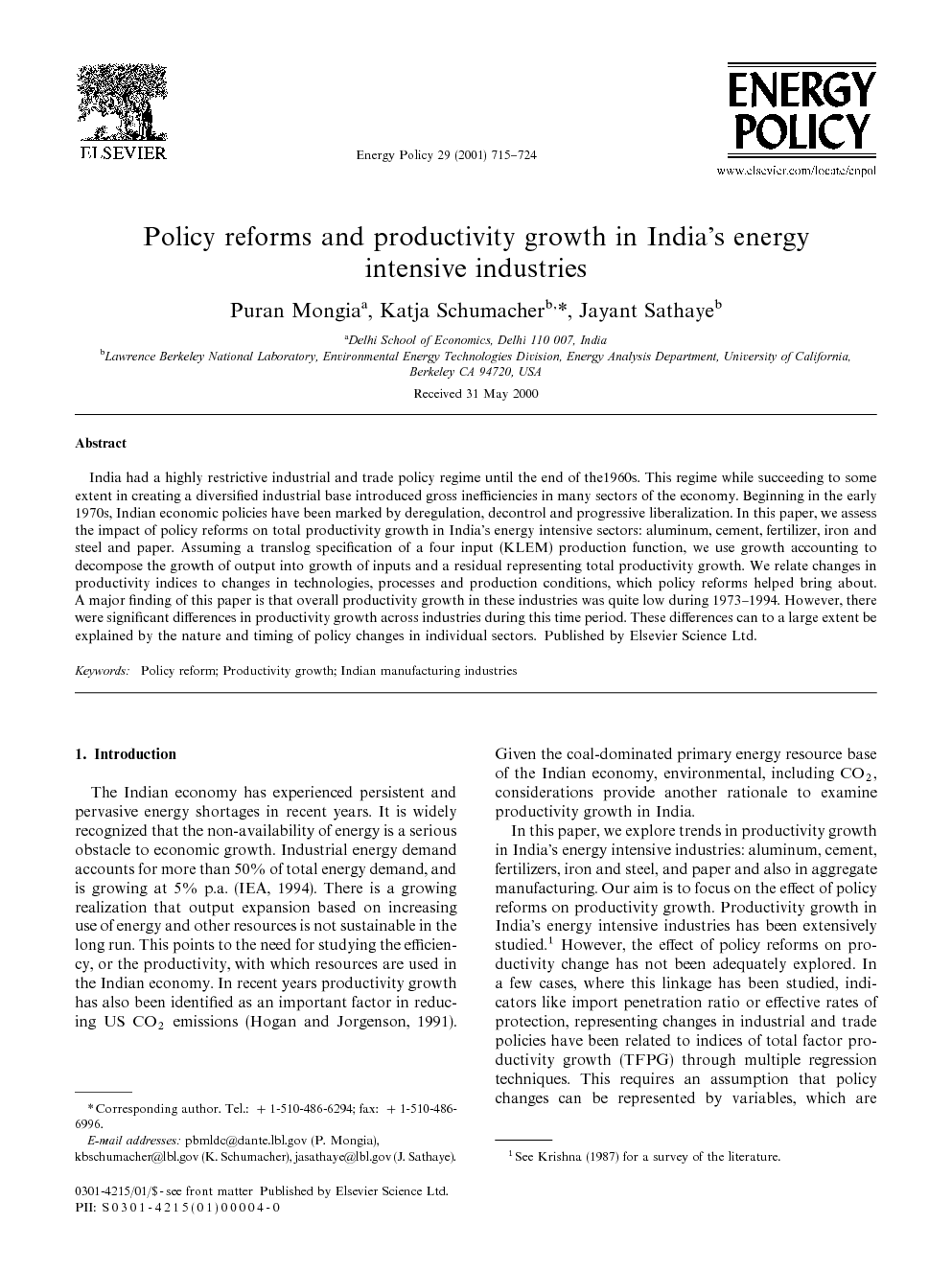 India had a highly restrictive industrial and trade policy regime until the end of the1960s. This regime while succeeding to some extent in creating a diversified industrial base introduced gross inefficiencies in many sectors of the economy. Beginning in the early 1970s, Indian economic policies have been marked by deregulation, decontrol and progressive liberalization. In this paper, we assess the impact of policy reforms on total productivity growth in India's energy intensive sectors: aluminum, cement, fertilizer, iron and steel and paper. Assuming a translog specification of a four input (KLEM) production function, we use growth accounting to decompose the growth of output into growth of inputs and a residual representing total productivity growth. We relate changes in productivity indices to changes in technologies, processes and production conditions, which policy reforms helped bring about. A major finding of this paper is that overall productivity growth in these industries was quite low during 1973–1994. However, there were significant differences in productivity growth across industries during this time period. These differences can to a large extent be explained by the nature and timing of policy changes in individual sectors.

The Indian economy has experienced persistent and pervasive energy shortages in recent years. It is widely recognized that the non-availability of energy is a serious obstacle to economic growth. Industrial energy demand accounts for more than 50% of total energy demand, and is growing at 5% p.a. (IEA, 1994). There is a growing realization that output expansion based on increasing use of energy and other resources is not sustainable in the long run. This points to the need for studying the efficiency, or the productivity, with which resources are used in the Indian economy. In recent years productivity growth has also been identified as an important factor in reducing US CO2 emissions (Hogan and Jorgenson, 1991). Given the coal-dominated primary energy resource base of the Indian economy, environmental, including CO2, considerations provide another rationale to examine productivity growth in India. In this paper, we explore trends in productivity growth in India's energy intensive industries: aluminum, cement, fertilizers, iron and steel, and paper and also in aggregate manufacturing. Our aim is to focus on the effect of policy reforms on productivity growth. Productivity growth in India's energy intensive industries has been extensively studied.1 However, the effect of policy reforms on productivity change has not been adequately explored. In a few cases, where this linkage has been studied, indicators like import penetration ratio or effective rates of protection, representing changes in industrial and trade policies have been related to indices of total factor productivity growth (TFPG) through multiple regression techniques. This requires an assumption that policy changes can be represented by variables, which are continuous in time. We stress that policy changes are discrete events, which are episodic in nature. So are changes in technology and production conditions. Also, the effect of the former on the latter takes place with a lag. Therefore, we judge the effect of policy changes in broadly defined sub-periods. Also, in a recent survey of the literature on productivity growth in Indian industry, Mongia and Sathaye (1998a) found that the estimates of productivity growth by different authors within and across different industries covered a wide range. The range of estimates was so wide that an unambiguous judgment about the nature and extent of productivity growth in Indian industry could not be made. The estimates varied because of differences in methodology, levels of aggregation, sources of data and time periods of study. This paper is motivated by the need to have comparable estimates for the five industries based on a uniform methodology, a common database and the same study period. It complements a recent paper (Roy et al., 1999) where we used econometric estimates of cost functions to infer magnitude and biases of technical change in these industries. And it builds on Mongia and Sathaye (1998b) where we used the method of growth accounting to estimate productivity growth and technological change in these industries. Our aim in this paper is to bring out details relevant from a policy point of view that tend to be glossed over in econometric estimates. A major finding of this study is that differences in productivity growth across industries, and across time for individual industries, can be largely explained by differential impacts of policy reforms. This is due to differences in initial conditions and in structural and institutional factors specific to industries. The plan of this paper is as follows. The next section contains a brief perspective on energy intensive industries. Section 3 outlines the methodology and describes the sources of data. In Section 4, we present estimates of partial and total productivity growth. Section 5 relates these estimates to policy changes in the Indian economy, and Section 6 contains concluding remarks.