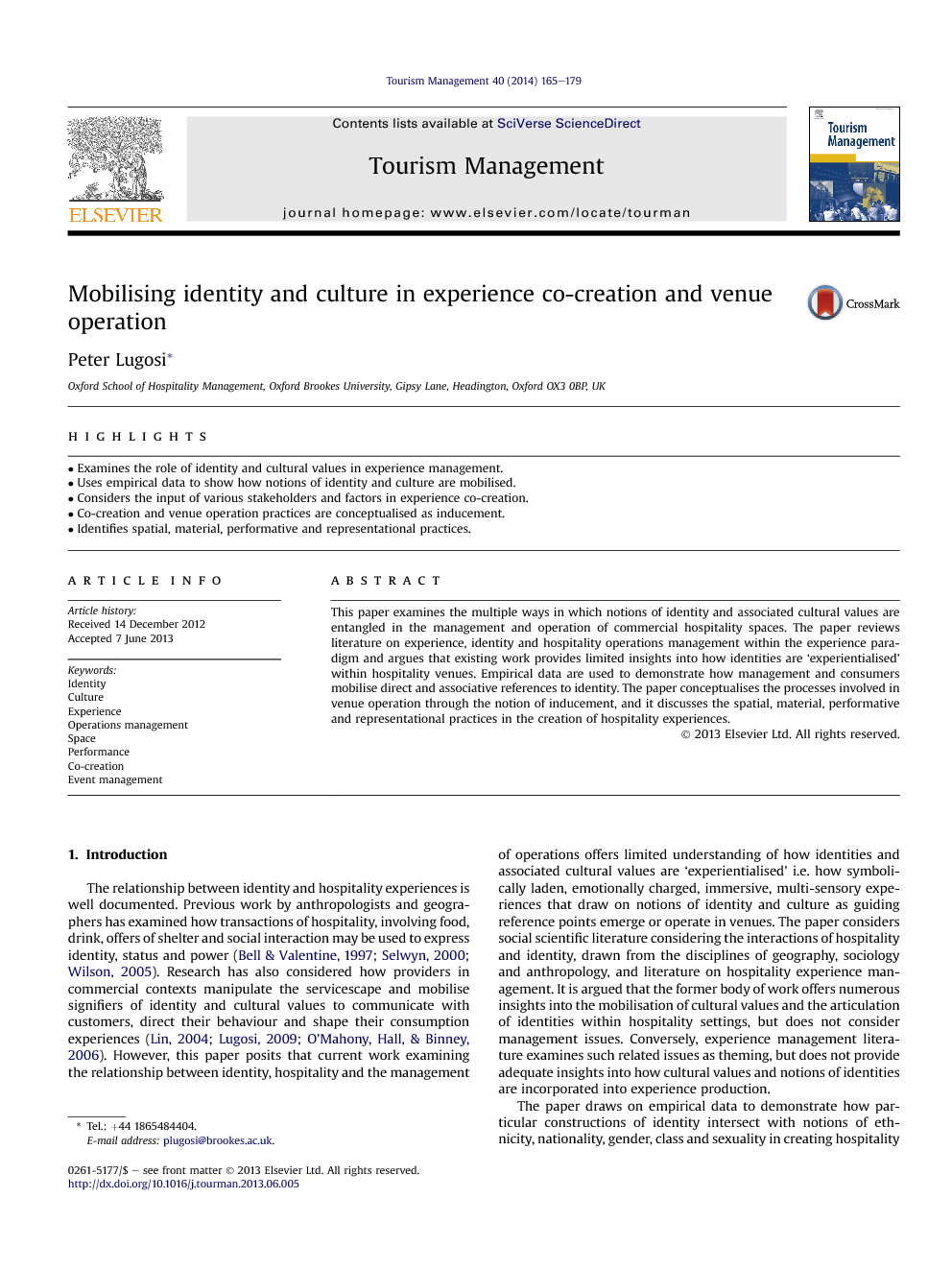 This paper examines the multiple ways in which notions of identity and associated cultural values are entangled in the management and operation of commercial hospitality spaces. The paper reviews literature on experience, identity and hospitality operations management within the experience paradigm and argues that existing work provides limited insights into how identities are ‘experientialised’ within hospitality venues. Empirical data are used to demonstrate how management and consumers mobilise direct and associative references to identity. The paper conceptualises the processes involved in venue operation through the notion of inducement, and it discusses the spatial, material, performative and representational practices in the creation of hospitality experiences.

The relationship between identity and hospitality experiences is well documented. Previous work by anthropologists and geographers has examined how transactions of hospitality, involving food, drink, offers of shelter and social interaction may be used to express identity, status and power (Bell & Valentine, 1997; Selwyn, 2000; Wilson, 2005). Research has also considered how providers in commercial contexts manipulate the servicescape and mobilise signifiers of identity and cultural values to communicate with customers, direct their behaviour and shape their consumption experiences (Lin, 2004; Lugosi, 2009; O'Mahony, Hall, & Binney, 2006). However, this paper posits that current work examining the relationship between identity, hospitality and the management of operations offers limited understanding of how identities and associated cultural values are ‘experientialised’ i.e. how symbolically laden, emotionally charged, immersive, multi-sensory experiences that draw on notions of identity and culture as guiding reference points emerge or operate in venues. The paper considers social scientific literature considering the interactions of hospitality and identity, drawn from the disciplines of geography, sociology and anthropology, and literature on hospitality experience management. It is argued that the former body of work offers numerous insights into the mobilisation of cultural values and the articulation of identities within hospitality settings, but does not consider management issues. Conversely, experience management literature examines such related issues as theming, but does not provide adequate insights into how cultural values and notions of identities are incorporated into experience production. The paper draws on empirical data to demonstrate how particular constructions of identity intersect with notions of ethnicity, nationality, gender, class and sexuality in creating hospitality experiences. It is argued that the experientialisation of identity involves the selective reconstruction and mobilisation of culturally specific expressions of values and behaviours by the operators, and it also involves consumers' performances of selves and their identification with or against particular notions of identity. It is important to stress that this paper is not concerned with hospitality and subjective experiences of identity i.e. how consumers feel about or relate to particular discourses of self. Rather, it focuses on how discourses of identity are distilled, juxtaposed and mobilised as organisational resources. The paper's approach is broadly in the actor-network theory (ANT) tradition (Latour, 2005; Lugosi & Erdélyi, 2009; Van der Duim, Ren, & Jóhannesson, 2013). ANT as a methodology seeks to examine the actors, actions, processes and relationships through which things come into being (Latour, 2005). There are three principal areas of interest within this perspective relevant to the current study: first, the different human and non-human actors or actants; second, enactments i.e. how actors/actants and their networks of relationships perform knowledge and agency, resulting in particular outcomes; and enrolment, i.e. how various (human and non-human) actors/actants are mobilised within these enactments or performances. This paper examines a hospitality/tourism venue/event called The Church which has been operating since 1979, and it accounts for the practices and processes through which management and consumers co-create notions of identity and culture through the experience. The paper conceptualises the processes involved in venue operation through the notion of inducement, and it discusses the spatial, material, performative and representational practices in the creation of hospitality experiences. It is argued that identifying specific practices of inducement within this research context helps to construct a broader thematic framework for understanding how identities may be entangled and mobilised within hospitality experiences in other contexts. By doing so, this paper, therefore, responds to emerging calls to examine critically the relationship between identity and spatial dimensions of hospitality (e.g. Lugosi, 2009; Lynch, Germann Molz, McIntosh, Lugosi, & Lashley, 2011) by mapping the entanglement of material, embodied, representational and symbolic practices in the production of space. This contributes to knowledge in two key ways: first, it broadens our understanding of the processes through which particular spaces are created or rendered hospitable. It thus contributes to current work examining the nature of hospitality in contemporary society and how it operates in different social contexts (cf. Lugosi, 2009; Lynch et al., 2011). Second, it builds upon and advances our understanding of experience management (cf. Gilmore & Pine, 2002; O'Mahony et al., 2006) by offering a context-sensitive conception of the complex processes of co-creation through which hospitality experiences are constructed.