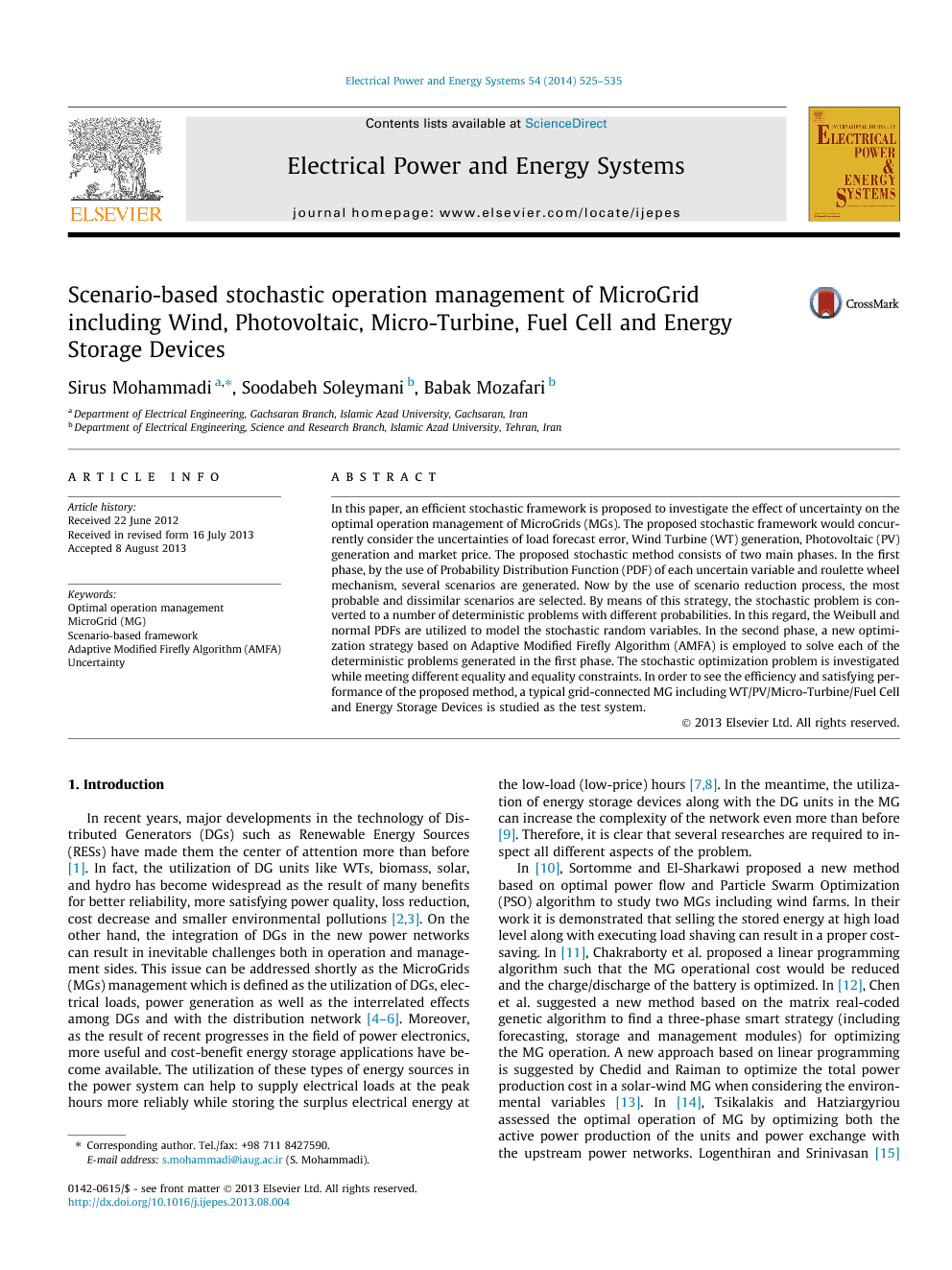 In this paper, an efficient stochastic framework is proposed to investigate the effect of uncertainty on the optimal operation management of MicroGrids (MGs). The proposed stochastic framework would concurrently consider the uncertainties of load forecast error, Wind Turbine (WT) generation, Photovoltaic (PV) generation and market price. The proposed stochastic method consists of two main phases. In the first phase, by the use of Probability Distribution Function (PDF) of each uncertain variable and roulette wheel mechanism, several scenarios are generated. Now by the use of scenario reduction process, the most probable and dissimilar scenarios are selected. By means of this strategy, the stochastic problem is converted to a number of deterministic problems with different probabilities. In this regard, the Weibull and normal PDFs are utilized to model the stochastic random variables. In the second phase, a new optimization strategy based on Adaptive Modified Firefly Algorithm (AMFA) is employed to solve each of the deterministic problems generated in the first phase. The stochastic optimization problem is investigated while meeting different equality and equality constraints. In order to see the efficiency and satisfying performance of the proposed method, a typical grid-connected MG including WT/PV/Micro-Turbine/Fuel Cell and Energy Storage Devices is studied as the test system.

In recent years, major developments in the technology of Distributed Generators (DGs) such as Renewable Energy Sources (RESs) have made them the center of attention more than before [1]. In fact, the utilization of DG units like WTs, biomass, solar, and hydro has become widespread as the result of many benefits for better reliability, more satisfying power quality, loss reduction, cost decrease and smaller environmental pollutions [2] and [3]. On the other hand, the integration of DGs in the new power networks can result in inevitable challenges both in operation and management sides. This issue can be addressed shortly as the MicroGrids (MGs) management which is defined as the utilization of DGs, electrical loads, power generation as well as the interrelated effects among DGs and with the distribution network [4], [5] and [6]. Moreover, as the result of recent progresses in the field of power electronics, more useful and cost-benefit energy storage applications have become available. The utilization of these types of energy sources in the power system can help to supply electrical loads at the peak hours more reliably while storing the surplus electrical energy at the low-load (low-price) hours [7] and [8]. In the meantime, the utilization of Energy Storage Devices along with the DG units in the MG can increase the complexity of the network even more than before [9]. Therefore, it is clear that several researches are required to inspect all different aspects of the problem. In [10], Sortomme and El-Sharkawi proposed a new method based on optimal power flow and Particle Swarm Optimization (PSO) algorithm to study two MGs including wind farms. In their work it is demonstrated that selling the stored energy at high load level along with executing load shaving can result in a proper cost-saving. In [11], Chakraborty et al. proposed a linear programming algorithm such that the MG operational cost would be reduced and the charge/discharge of the battery is optimized. In [12], Chen et al. suggested a new method based on the matrix real-coded genetic algorithm to find a three-phase smart strategy (including forecasting, storage and management modules) for optimizing the MG operation. A new approach based on linear programming is suggested by Chedid and Raiman to optimize the total power production cost in a solar-wind MG when considering the environmental variables [13]. In [14], Tsikalakis and Hatziargyriou assessed the optimal operation of MG by optimizing both the active power production of the units and power exchange with the upstream power networks. Logenthiran and Srinivasan [15] proposed a three-phase approach to find the optimal solution for the cost objective function. In [16], Mohamed and Koivo investigated the MG energy management problem when considering the effect of storage facilities. However, as the result of neglecting time intervals in the problem, the charge/discharge aspect of the storage tools is not considered so that the total cost is increased. Nevertheless, the main deficiency with all the above mentioned works is the implementation of the analysis in a deterministic framework. In fact, the presence of uncertainty in the nature of the MG can deprive the mentioned researches from the real optimal solution of the investigated problem. In a deterministic framework, the accuracy of the output solutions depends on the accuracy of the input variables when the possibility of some prediction error is just common in a power market. Moreover, in an open access power market, the degree of uncertainty of the load forecast error and market price can be even more perceptible [17] and [18]. By considering the unpredictable characteristics of WT and PV power generation [19] along with the uncertainty of load demand and market price, the necessity of a wide investigation with a stochastic structure becomes more evident. This situation requires the re-assessment of the above mentioned works to see the validity of the proposed methods in a stochastic environment. By the way, in order to reduce the amount of error associated with the uncertainty of the input variables, new methods or techniques are needed to be investigated [20]. Therefore, in this paper a stochastic framework based on scenario production technique is proposed such that the uncertainty associated with the load forecast error, WT/PV power generation and market price would be considered in the operation management of MGs, sufficiently. The proposed stochastic framework consists of two phases. In the first phase, for each of the input variables a specific PDF is considered. Then by the use of roulette wheel mechanism, different scenarios with different probabilities are generated. Now, a number of dissimilar scenarios with the most probability of happening are chosen (scenario reduction). In the second phase, the operation management of MG would be solved for each of the selected scenarios, separately. Finally, the aggregation step is applied to the obtained solutions to find the optimal aggregated solution. Moreover, in order to handle the optimization process more suitably, a new method based on Adaptive Modified Firefly Algorithm (AMFA) is proposed. The Firefly Algorithm (FA) is a meta-heuristic population based optimization algorithm that is inspired from the flashing fireflies in the summer sky in the tropical temperature regions [21]. While the FA had many benefits both in ability and concept, a modification process is proposed to improve the total ability of the algorithm in the optimization applications. The satisfying performance of the proposed stochastic method is demonstrated on a typical grid-connected MG including WT, PV, Micro-Turbine, Fuel Cell and Energy Storage Devices.

In this work, the stochastic energy operation management of DGs in a gird-connected MG is investigated. The proposed method is based on the idea of PDF for each uncertain variable and the generation process of several scenarios to model the uncertainty of load demand, market bid, WT and PV electrical power generation. The proposed stochastic method utilizes a scenario-based strategy to convert the stochastic problem to several deterministic problems with different probability. Since the economic energy dispatch is a type of nonlinear and complex optimization problem with equality and inequality constraints, a new optimization algorithm based on AMFA is proposed. The proposed AMFA makes use of a powerful modification process to enhance the diversity of the firefly population as well as a self-adaptive technique to increase the ability of the algorithm to move toward the promising global optimal solution quickly. The studied MG includes different types of power units such as WT, PV, Micro-Turbine, Fuel Cell and Energy Storage Devices (NiMH-Battery). Consequently, in order to show the correlation between the power sources, a 24 h study is implemented. The simulation results show the satisfying performance of the proposed stochastic method. Moreover, it is shown that the utilization of the proposed stochastic method can improve the dependability of the optimal solutions with capturing more uncertainty spectrum.