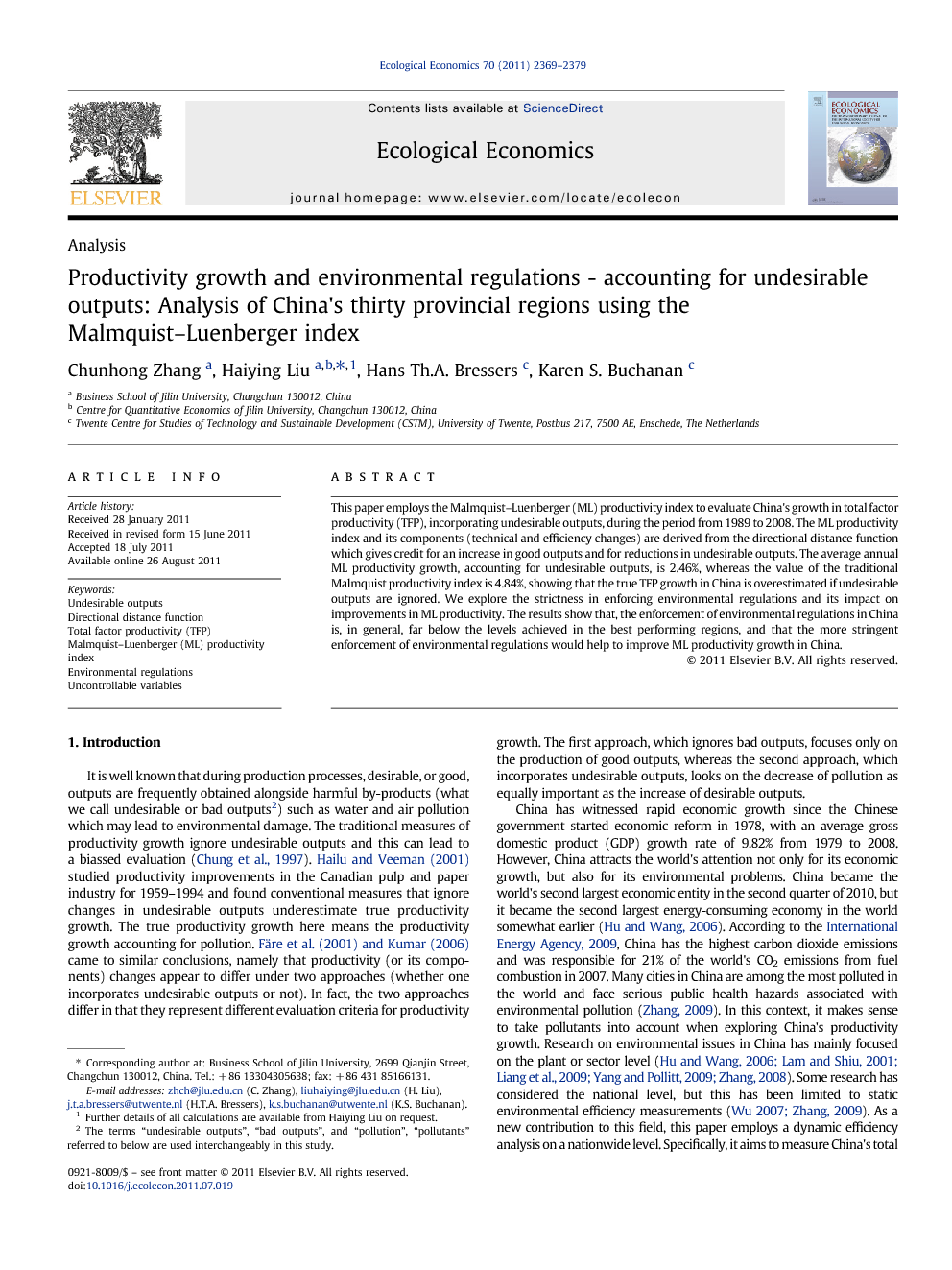 It is well known that during production processes, desirable, or good, outputs are frequently obtained alongside harmful by-products (what we call undesirable or bad outputs2) such as water and air pollution which may lead to environmental damage. The traditional measures of productivity growth ignore undesirable outputs and this can lead to a biassed evaluation (Chung et al., 1997). Hailu and Veeman (2001) studied productivity improvements in the Canadian pulp and paper industry for 1959–1994 and found conventional measures that ignore changes in undesirable outputs underestimate true productivity growth. The true productivity growth here means the productivity growth accounting for pollution. Färe et al., 2001 and Kumar, 2006 came to similar conclusions, namely that productivity (or its components) changes appear to differ under two approaches (whether one incorporates undesirable outputs or not). In fact, the two approaches differ in that they represent different evaluation criteria for productivity growth. The first approach, which ignores bad outputs, focuses only on the production of good outputs, whereas the second approach, which incorporates undesirable outputs, looks on the decrease of pollution as equally important as the increase of desirable outputs. China has witnessed rapid economic growth since the Chinese government started economic reform in 1978, with an average gross domestic product (GDP) growth rate of 9.82% from 1979 to 2008. However, China attracts the world's attention not only for its economic growth, but also for its environmental problems. China became the world's second largest economic entity in the second quarter of 2010, but it became the second largest energy-consuming economy in the world somewhat earlier (Hu and Wang, 2006). According to the International Energy Agency, 2009, China has the highest carbon dioxide emissions and was responsible for 21% of the world's CO2 emissions from fuel combustion in 2007. Many cities in China are among the most polluted in the world and face serious public health hazards associated with environmental pollution (Zhang, 2009). In this context, it makes sense to take pollutants into account when exploring China's productivity growth. Research on environmental issues in China has mainly focused on the plant or sector level (Hu and Wang, 2006, Lam and Shiu, 2001, Liang et al., 2009, Yang and Pollitt, 2009 and Zhang, 2008). Some research has considered the national level, but this has been limited to static environmental efficiency measurements (Wu, 2007 and Zhang, 2009). As a new contribution to this field, this paper employs a dynamic efficiency analysis on a nationwide level. Specifically, it aims to measure China's total factor productivity (TFP) growth while incorporating undesirable outputs to obtain a “true” evaluation. This paper contrasts the results from the conventional measurement approach, with a method that incorporates uncontrollable variables using data envelopment analysis (DEA). This allows our paper to explore the efficacy of China's environmental regulations, in terms of the stringency of their enforcements, and the impact of environmental regulations on TFP growth. A widely used method to measure total factor productivity is the Malmquist index, which calculates TFP using DEA. Since the work of Charnes et al. (1978), the DEA approach has been widely used in evaluating the relative efficiencies of decision making units (DMUs) with multiple outputs and multiple inputs. In addition to cross-sectional analysis, data envelopment analysis (DEA) is also employed to construct nonparametric Malmquist productivity indices3 that measure DMU productivity changes over time (Färe et al., 1994a and Färe et al., 1994b). As it was recognised that the standard DEA models ignored undesirable outputs, a growing literature has emerged since the end of 1980s that models overall production of both good and bad outputs while calculating the efficiency and productivity of DMUs (e.g. Chung et al., 1997, Färe et al., 1989, Färe and Grosskopf, 2004, Lovell et al., 1995, Picazo-Tadeo et al., 2005, Reinhard et al., 1999, Scheel, 2001, Seiford and Zhu, 2002, Seiford and Zhu, 2005, Vencheh et al., 2005, Zhou et al., 2006, Zhou et al., 2007 and Zhou et al., 2008). The DEA research on dealing with undesirable outputs can be divided into three approaches. The first treats undesirable outputs directly as inputs (e.g. Reinhard et al., 1999). A second group deals with undesirable outputs through certain transformations, which can be further subdivided into two categories. One approach converts the values of undesirable outputs to their reciprocals (e.g., Lovell et al., 1995) and is referred to as “multiplicative inverse” (Scheel, 2001). The other approach applies a linear monotone decreasing transformation to change undesirable outputs into positive desirable outputs (Seiford and Zhu, 2002). The third group is based on the concept of a weak disposable reference technology, meaning that disposing of bad outputs is either costly or restricted (also known as the environmental DEA technology, see Färe and Grosskopf, 2004). For example, Färe et al. (1989) used a reciprocal (hyperbolic) measure and judged firms on their ability to decrease bad outputs and inputs while simultaneously increasing good outputs. Introduced by Chung et al. (1997), the directional distance function credits reductions in bad outputs and increases in good outputs according to the given direction. If one treats undesirable outputs as inputs, the resulting DEA model does not truly reflect the production process (Seiford and Zhu, 2002). Retaining the original undesirable outputs data, the weak disposable reference technology approach has been more widely adopted than the data transformation technique in modelling undesirable outputs (Zhou et al., 2007), and especially since the directional distance function approach was proposed by Chung et al. (1997). There are several studies on the development and application of this approach, including measurement of the Malmquist–Luenberger (ML) productivity index and its components (Färe et al., 2001, Färe and Grosskopf, 2004, Kumar, 2006 and Picazo-Tadeo et al., 2005). This study follows Chung et al., 1997 and Färe et al., 2001, and uses the directional distance function to measure the ML productivity indices of thirty Chinese province-level regions. The remainder of the paper is organised as follows. Section 2 discusses the directional distance function and the Malmquist–Luenberger productivity index as employed in the paper. Section 3 describes the data and presents the results related to TFP change and changes in technology and efficiency. In the fourth section, we explore the efficacy of China's environmental regulations and the impact of environmental regulations on ML productivity growth. The last section draws conclusions.