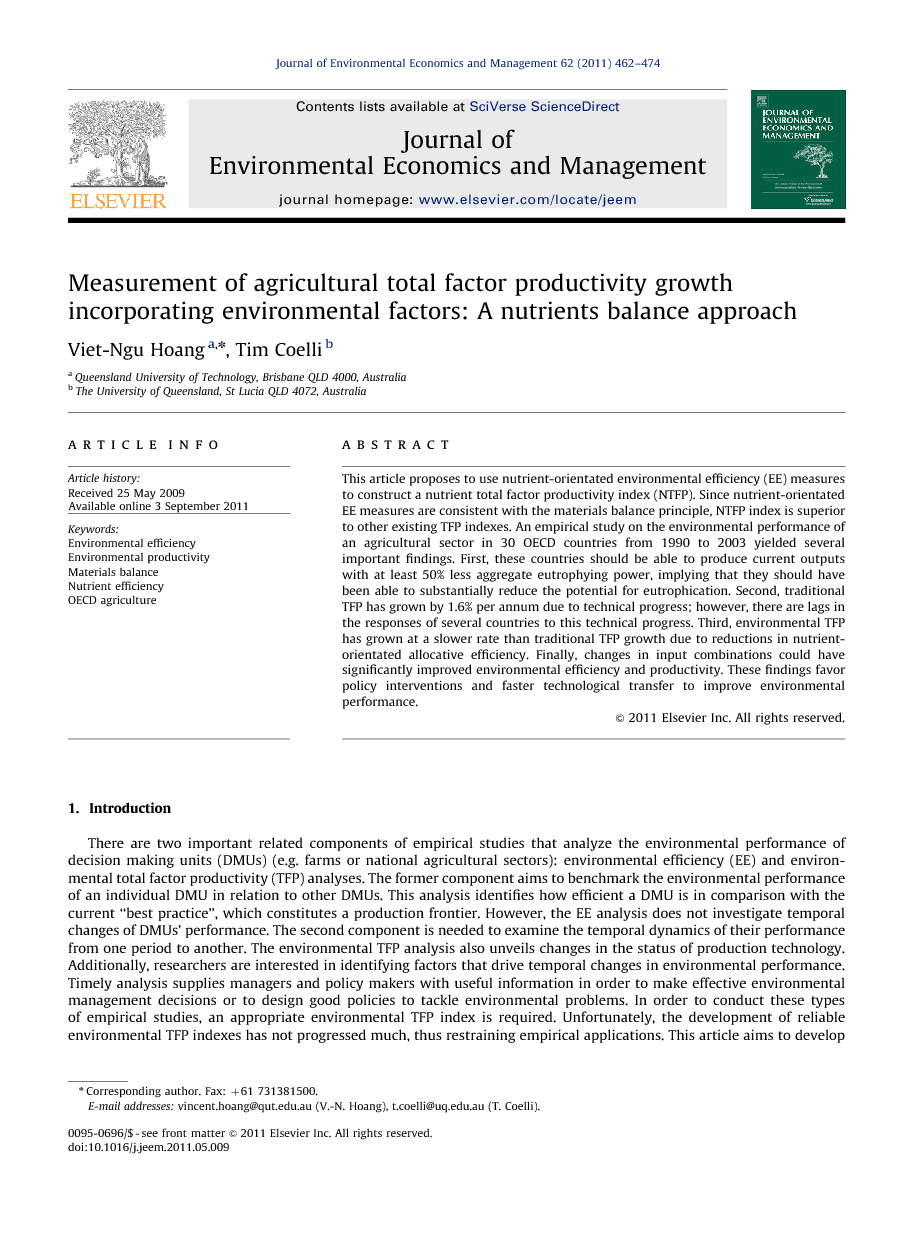 This article proposes to use nutrient-orientated environmental efficiency (EE) measures to construct a nutrient total factor productivity index (NTFP). Since nutrient-orientated EE measures are consistent with the materials balance principle, NTFP index is superior to other existing TFP indexes. An empirical study on the environmental performance of an agricultural sector in 30 OECD countries from 1990 to 2003 yielded several important findings. First, these countries should be able to produce current outputs with at least 50% less aggregate eutrophying power, implying that they should have been able to substantially reduce the potential for eutrophication. Second, traditional TFP has grown by 1.6% per annum due to technical progress; however, there are lags in the responses of several countries to this technical progress. Third, environmental TFP has grown at a slower rate than traditional TFP growth due to reductions in nutrient-orientated allocative efficiency. Finally, changes in input combinations could have significantly improved environmental efficiency and productivity. These findings favor policy interventions and faster technological transfer to improve environmental performance.

There are two important related components of empirical studies that analyze the environmental performance of decision making units (DMUs) (e.g. farms or national agricultural sectors): environmental efficiency (EE) and environmental total factor productivity (TFP) analyses. The former component aims to benchmark the environmental performance of an individual DMU in relation to other DMUs. This analysis identifies how efficient a DMU is in comparison with the current “best practice”, which constitutes a production frontier. However, the EE analysis does not investigate temporal changes of DMUs' performance. The second component is needed to examine the temporal dynamics of their performance from one period to another. The environmental TFP analysis also unveils changes in the status of production technology. Additionally, researchers are interested in identifying factors that drive temporal changes in environmental performance. Timely analysis supplies managers and policy makers with useful information in order to make effective environmental management decisions or to design good policies to tackle environmental problems. In order to conduct these types of empirical studies, an appropriate environmental TFP index is required. Unfortunately, the development of reliable environmental TFP indexes has not progressed much, thus restraining empirical applications. This article aims to develop a new environmental TFP index, constructed from EE measures that are consistent with the materials balance principle (MBP). The MBP regulates that materials in inputs are transformed into desirable outputs and emissions that have potential to cause pollution [1]. The MBP holds true in any agricultural production system. Farmers use inputs such as feed, seed, planting material, fertilizers, purchased animals, manure, soil and water containing nitrogen (N) and phosphorous (P), to produce outputs. The nutrients balance equals the total amount of nutrients in inputs minus the amount of nutrients in outputs. The balance that goes into the land, air or water potentially causes pollution. Hence, the polluting potential of agricultural production can be represented by the nutrients balance. The traditional approach to measuring environmental efficiency (EE) is the modeling of polluting effects as either bad outputs or environmentally detrimental inputs in production functions. This approach, however, has two limitations: first, it does not allow for the simultaneous expansion of desirable outputs and contraction of bad outputs [2] and second, it does not conform to the MBP [3]. The use of hyperbolic distance functions (HDFs) or directional distance functions (DDFs) can overcome the first shortcoming. However, Coelli et al. [3] show that the traditional use of HDF fails to incorporate the MBP. In this paper, we will also show that the existing use of DDFs fail to incorporate the MBP in modeling pollution. To address the issue of measuring temporal changes in EE, many studies have developed environmental TFP indexes, which generally involve two steps: estimating EE scores and using these EE scores to construct productivity indexes. Obviously, if the EE measure does not satisfy the MBP, its related environmental TFP indexes become deficient. To overcome this we propose to use the MBP-based EE developed by Coelli et al. [3] to construct the environmental TFP index. Inter-temporal changes in this environmental TFP can be decomposed into technical change (TC), technical efficiency change (TEC) and nutrient-oriented allocative efficiency change (NAEC). TC and TEC capture the effects of technological and efficiency change while NAEC accounts for changes in input combinations in terms of nutrients. Empirically, the estimation and decomposition can be easily computed using existing non-parametric (e.g. data envelopment analysis—DEA) or parametric (e.g. stochastic frontier analysis—SFA) techniques. This proposed framework can provide several avenues to conduct empirical studies that give practical and reliable information for environmental management. First, the empirical decomposition of environmental TFP growth identifies three courses of actions that managers or policy makers can take to affect the environmental performance of firms, industries or economies. For example, if the majority of firms are technically efficient (i.e. staying on the production frontier) but not allocatively efficient, policies targeting firms to change input combinations should be considered. Another example is that if domestic industries are slow in deploying environmentally friendly technologies (e.g. evidenced by temporal reductions in technical efficiency levels), policies encouraging (discouraging) the use of new (old) technologies would be are worth investigating. Second, the proposed framework enables researchers to examine factors that determine spatial and temporal variations in environmental TFP growth. The reliability of such analysis depends critically on the appropriateness of the environmental TFP measures. Undoubtedly, in those situations where the MBP applies the use of this new environmental TFP index will give more reliable results. The paper is organized as follows. In Section 2 we review the literature on the existing approaches to measuring environmental efficiency and productivity. Section 3 introduces the MBP-based EE and constructs the new environmental TFP. Section 4 presents an empirical analysis of crop and livestock production in 30 Organization for Economic Co-operation Development (OECD) countries from 1990 to 2003. Section 5 concludes the paper. An appendix available at http://aere.org/journals the Journal's online repository of supplemental material provides supporting detail.

The existing fashion in measuring EE was the modeling of pollution as either inputs or outputs. The popularity of these approaches in empirical studies has led to many studies using EE to construct environmental TFP indexes. Unfortunately, if pollution is modeled as either input or output, the derived EE fails to satisfy the MBP. Environmental TFP indexes built upon these EE measures are deficient. This paper proposed a nutrient total factor productivity (NTFP) index that is constructed in a similar way to that of the Malmquist TFP index. Instead of using ITE scores, the NTFP uses nutrient efficiency measures. These nutrient efficiency measures are consistent with the MBP; hence, the NTFP are said to be more superior to existing environmental TFP measures. This paper also showed that temporal changes in NTFP could be decomposed into TC, TEC and NAEC. TC refers to shifts in the production frontier. TEC relates to individual firms catching up to the production frontier. NAEC reveals information about improvements in nutrient allocative efficiency levels due to different combinations of nutrient-containing inputs. This paper used an input-orientated DEA framework to calculate environmental efficiency and productivity change in crop and livestock production of 30 OECD countries from 1990 to 2003. This empirical study yielded several important findings. First, there was great potential for OECD countries to improve their nutrient efficiency by either improving their ITE or more importantly, by changing the combination of nutrient-containing inputs. Improved nutrient efficiency suggests the eutrophying power of N and P balance entering water systems is lower. Second, these countries achieved an annual traditional TFP growth rate of 1.6%. The production technology regressed but its effect on TFP was counteracted by reductions of TEC. Third, the environmental TFP growth was estimated to be smaller than the traditional TFP growth, which was caused by reductions in the nutrient-orientated allocative efficiency levels. This observation implies that changes in the input combinations could have significantly improved the environmental productivity performance of OECD countries. These results delivered several important policy implications. First, international technological transfer was not effective among OECD countries during the period surveyed. This slow international spillover might be a consequence of the nature of “localized” innovations, long lags in local R&D and the low levels of transfer in the previous periods. Policies that target faster transfer and deployment of new technologies would help these countries achieve higher efficiency and productivity growth. Second, good environmental performance in several countries might be the result of environmental policies these countries had implemented. The present paper was not able to empirically assess the potential effects of the environmental policies on the nutrient efficiency and productivity performance across the 30 countries due to incomplete data, but emphasized that such studies are worthwhile. Third, governmental interventions to change the relative prices of inputs (e.g. land and fertilizers) are worth considering because empirical results showed that changes in the combinations of inputs could have stronger impacts on the environmental performance of the agricultural sector. There are important directions for future research. First, the framework can be applied to analyze the environmental performance of farms that are located in the same or highly similar areas. Such application can enhance the accuracy of environmental efficiency and productivity estimates because differences due to climate and land conditions could be avoided. Second, parametric estimation techniques can be used to estimate production frontiers and calculate nutrient efficiency and productivity levels. By using parametric techniques, data noise – such as changes in weather conditions – will be accounted for to obtain more reliable results. Third, this analysis can be duplicated using updated data of important variables (for example R&D, transfer of technologies, and governmental policies) to provide more reliable results.