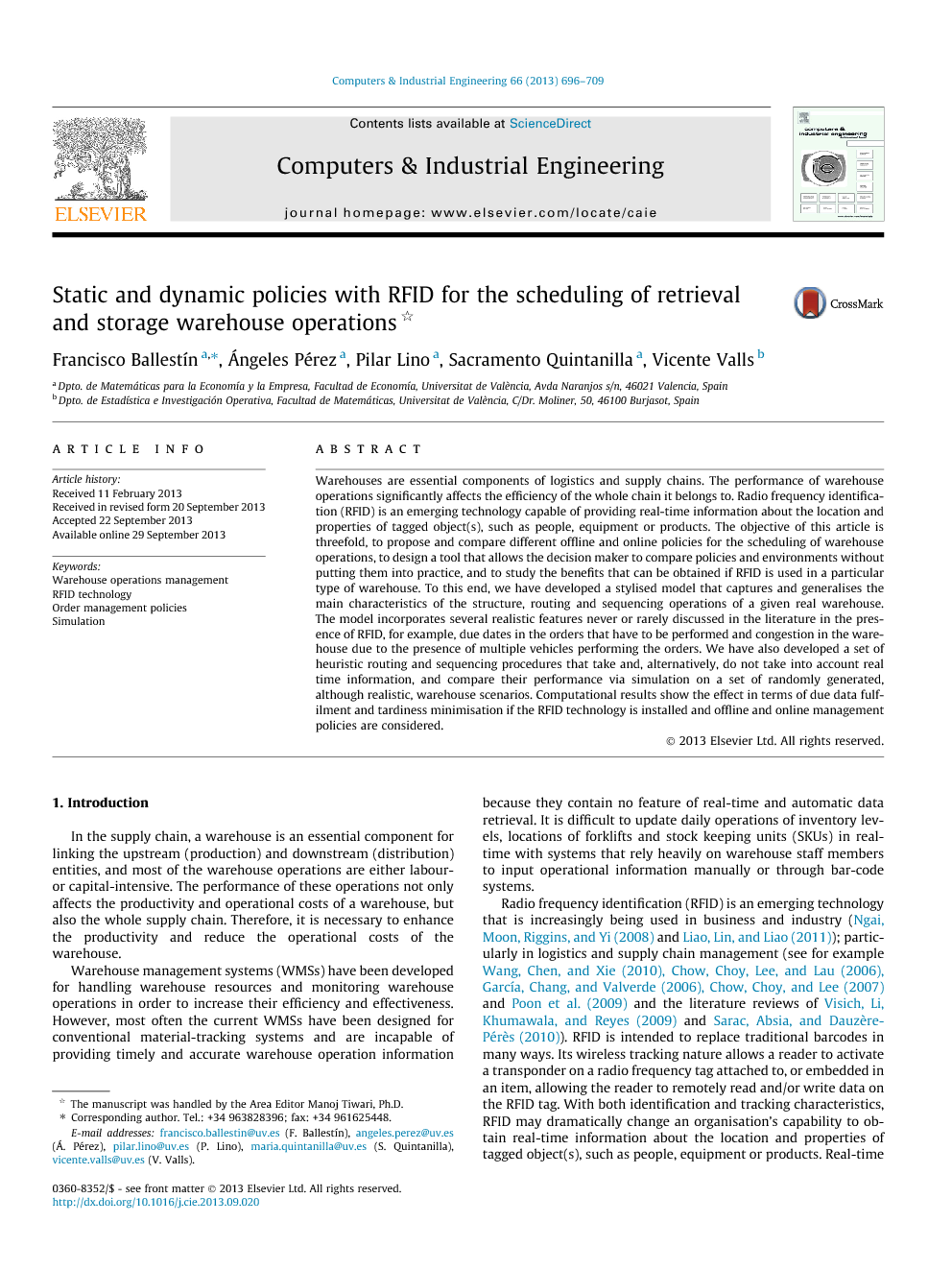 Warehouses are essential components of logistics and supply chains. The performance of warehouse operations significantly affects the efficiency of the whole chain it belongs to. Radio frequency identification (RFID) is an emerging technology capable of providing real-time information about the location and properties of tagged object(s), such as people, equipment or products. The objective of this article is threefold, to propose and compare different offline and online policies for the scheduling of warehouse operations, to design a tool that allows the decision maker to compare policies and environments without putting them into practice, and to study the benefits that can be obtained if RFID is used in a particular type of warehouse. To this end, we have developed a stylised model that captures and generalises the main characteristics of the structure, routing and sequencing operations of a given real warehouse. The model incorporates several realistic features never or rarely discussed in the literature in the presence of RFID, for example, due dates in the orders that have to be performed and congestion in the warehouse due to the presence of multiple vehicles performing the orders. We have also developed a set of heuristic routing and sequencing procedures that take and, alternatively, do not take into account real time information, and compare their performance via simulation on a set of randomly generated, although realistic, warehouse scenarios. Computational results show the effect in terms of due data fulfilment and tardiness minimisation if the RFID technology is installed and offline and online management policies are considered.

In the supply chain, a warehouse is an essential component for linking the upstream (production) and downstream (distribution) entities, and most of the warehouse operations are either labour- or capital-intensive. The performance of these operations not only affects the productivity and operational costs of a warehouse, but also the whole supply chain. Therefore, it is necessary to enhance the productivity and reduce the operational costs of the warehouse. Warehouse management systems (WMSs) have been developed for handling warehouse resources and monitoring warehouse operations in order to increase their efficiency and effectiveness. However, most often the current WMSs have been designed for conventional material-tracking systems and are incapable of providing timely and accurate warehouse operation information because they contain no feature of real-time and automatic data retrieval. It is difficult to update daily operations of inventory levels, locations of forklifts and stock keeping units (SKUs) in real-time with systems that rely heavily on warehouse staff members to input operational information manually or through bar-code systems. Radio frequency identification (RFID) is an emerging technology that is increasingly being used in business and industry (Ngai, Moon, Riggins, and Yi (2008) and Liao, Lin, and Liao (2011)); particularly in logistics and supply chain management (see for example Wang et al., 2010, Chow et al., 2006, García et al., 2006 and Chow et al., 2007 and Poon et al. (2009) and the literature reviews of Visich, Li, Khumawala, and Reyes (2009) and Sarac, Absia, and Dauzère-Pérès (2010)). RFID is intended to replace traditional barcodes in many ways. Its wireless tracking nature allows a reader to activate a transponder on a radio frequency tag attached to, or embedded in an item, allowing the reader to remotely read and/or write data on the RFID tag. With both identification and tracking characteristics, RFID may dramatically change an organisation’s capability to obtain real-time information about the location and properties of tagged object(s), such as people, equipment or products. Real-time information can be obtained without RFID, but using this technology facilitates obtaining it. As stated in Lim, Bahr, and Leung (in press), “interest in RFID in warehousing is rather stagnant and relatively small in comparison to other research domains”. According to this review, neither due dates nor congestion, both key concepts in our paper, have been studied in the context of RFID.

In this paper we have explored the impact of the RFID technology on the management of the storage/retrieval operations in a warehouse. We have considered six order management environments as the result of combining two types of policies (static, dynamic) with three technological environments (no RFID tags, RFID tags are attached on racks, RFID tags are attached on racks and pallets) in all possible ways. A solution for the problem has consisted of an order management policy that, given a set of orders to be fulfilled, indicates a sequence of order fulfilment and assigns a route and a forklift for each order. The objective has been the minimisation of the expected tardiness. We have introduced a set of order management policies whose performances have been compared via simulation on a set of randomly generated realistic test instances of different complexity. Given an instance and an order management policy, the developed simulator simulates the fulfilment of the storage/retrieval orders by simulating the movements of the forklifts inside the warehouse and making decisions at certain decision times according to the given policy. A first conclusion that can be drawn from this work is that the dynamic order management environments are significantly more efficient, as far as tardiness and total flow time is concerned, than the static ones mainly because a dynamic environment allows us to incorporate information about the current status of the warehouse into the decision making process. In particular, the priority rules that take into account the concept of expected congestion in the working zones and the due dates yield the best results. Regarding the RFID technology the main conclusion is that using this technology instead of a technology that requires human intervention to identify and locate items greatly improves the efficiency of an order management policy. We can conclude also that RFID tagging both racks and pallets is more efficient than tagging only racks. In fact, we consider that applying a dynamic policy in a warehouse where both racks and pallets are RFID tagged is an excellent option in practice. Another issue that we are considering as a future work is to investigate the benefits of also attaching RFID tags on the warehouse floor at the depot, at the aisle intersections and in front of the columns. These additional tags would allow the automatic identification and location of the forklifts inside the warehouse in real time. This information could be used to dynamically assign routes to the forklifts taking into account the current status of the warehouse, for example, taking into account the current working zone congestion.