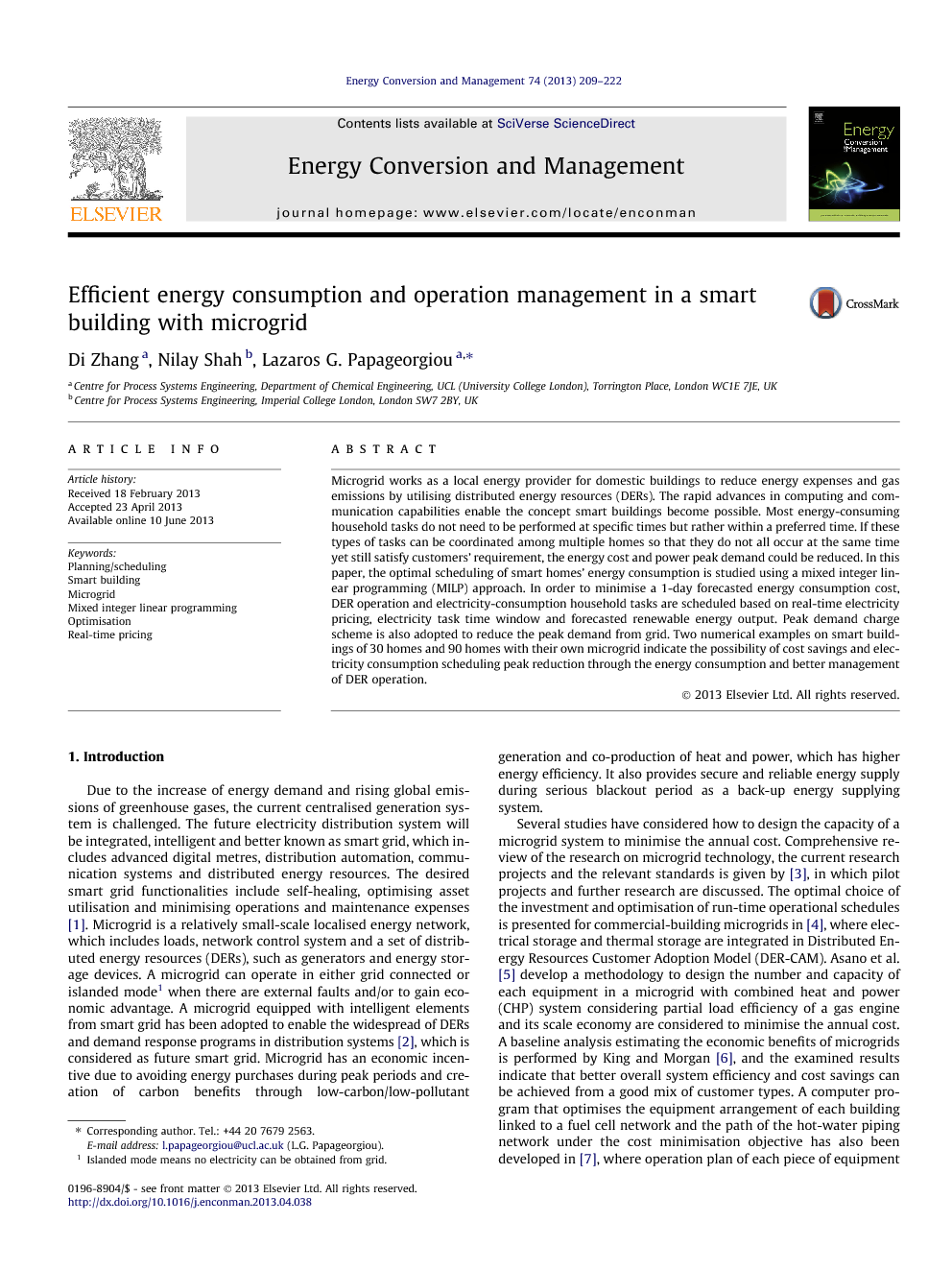 Microgrid works as a local energy provider for domestic buildings to reduce energy expenses and gas emissions by utilising distributed energy resources (DERs). The rapid advances in computing and communication capabilities enable the concept smart buildings become possible. Most energy-consuming household tasks do not need to be performed at specific times but rather within a preferred time. If these types of tasks can be coordinated among multiple homes so that they do not all occur at the same time yet still satisfy customers’ requirement, the energy cost and power peak demand could be reduced. In this paper, the optimal scheduling of smart homes’ energy consumption is studied using a mixed integer linear programming (MILP) approach. In order to minimise a 1-day forecasted energy consumption cost, DER operation and electricity-consumption household tasks are scheduled based on real-time electricity pricing, electricity task time window and forecasted renewable energy output. Peak demand charge scheme is also adopted to reduce the peak demand from grid. Two numerical examples on smart buildings of 30 homes and 90 homes with their own microgrid indicate the possibility of cost savings and electricity consumption scheduling peak reduction through the energy consumption and better management of DER operation.

An MILP model has been proposed for energy consumption and operation management in a smart building with multiple smart homes. Two examples of 30 homes with same living habit and 90 with different living habits for a winter day have been studied. Twelve domestic electrical tasks and equipment operations are scheduled based on given time windows, real-time half-hourly grid electricity prices and peak demand extra charge to obtain the minimum cost and energy demand. Significant cost savings and peak demand savings have been achieved in both examples. The power output from the wind generator varies according to the weather conditions. The proposed MILP scheduling model can use the power generated by wind generators when available, providing further savings for the customers. Under the optimised scheduling scenario, the CHP generator is used more efficiently and provides heat more steadily than under the earliest starting time scenario. When the peak demand price scheme is applied, the highest peak demand from the grid and total peak demand over the threshold can significantly be reduced. This power demand reduction has the benefit of releasing the burden on the central grid and reducing the expense of upgrading the current grid infrastructure to fulfill increasing energy demand. The power demand reduction also depends on the family living habits: for instance, if they prefer doing the washing during night time when electricity price from the grid is cheaper, there will be more savings. Without changing living habits totally, if the tasks have wider time windows, the cost saving and peak demand shaving could be further improved. On the other hand, when the domestic task scheduling is implemented in real life, it could also affect people’s behaviour and wider time windows may be preferred to obtain more cost savings.