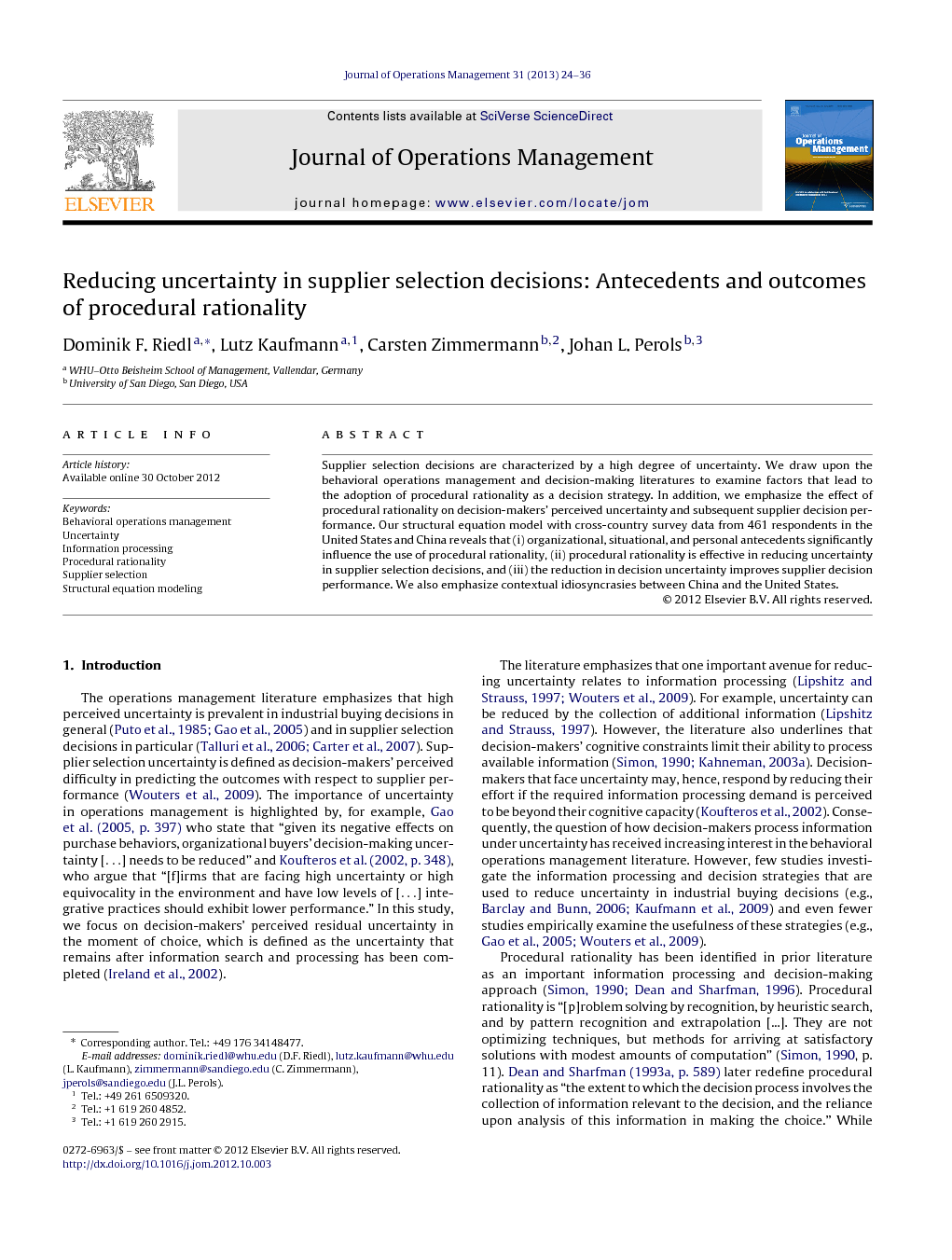 The operations management literature emphasizes that high perceived uncertainty is prevalent in industrial buying decisions in general (Puto et al., 1985 and Gao et al., 2005) and in supplier selection decisions in particular (Talluri et al., 2006 and Carter et al., 2007). Supplier selection uncertainty is defined as decision-makers’ perceived difficulty in predicting the outcomes with respect to supplier performance (Wouters et al., 2009). The importance of uncertainty in operations management is highlighted by, for example, Gao et al. (2005, p. 397) who state that “given its negative effects on purchase behaviors, organizational buyers’ decision-making uncertainty […] needs to be reduced” and Koufteros et al. (2002, p. 348), who argue that “[f]irms that are facing high uncertainty or high equivocality in the environment and have low levels of […] integrative practices should exhibit lower performance.” In this study, we focus on decision-makers’ perceived residual uncertainty in the moment of choice, which is defined as the uncertainty that remains after information search and processing has been completed (Ireland et al., 2002). The literature emphasizes that one important avenue for reducing uncertainty relates to information processing (Lipshitz and Strauss, 1997 and Wouters et al., 2009). For example, uncertainty can be reduced by the collection of additional information (Lipshitz and Strauss, 1997). However, the literature also underlines that decision-makers’ cognitive constraints limit their ability to process available information (Simon, 1990 and Kahneman, 2003a). Decision-makers that face uncertainty may, hence, respond by reducing their effort if the required information processing demand is perceived to be beyond their cognitive capacity (Koufteros et al., 2002). Consequently, the question of how decision-makers process information under uncertainty has received increasing interest in the behavioral operations management literature. However, few studies investigate the information processing and decision strategies that are used to reduce uncertainty in industrial buying decisions (e.g., Barclay and Bunn, 2006 and Kaufmann et al., 2009) and even fewer studies empirically examine the usefulness of these strategies (e.g., Gao et al., 2005 and Wouters et al., 2009). Procedural rationality has been identified in prior literature as an important information processing and decision-making approach (Simon, 1990 and Dean and Sharfman, 1996). Procedural rationality is “[p]roblem solving by recognition, by heuristic search, and by pattern recognition and extrapolation [...]. They are not optimizing techniques, but methods for arriving at satisfactory solutions with modest amounts of computation” (Simon, 1990, p. 11). Dean and Sharfman (1993a, p. 589) later redefine procedural rationality as “the extent to which the decision process involves the collection of information relevant to the decision, and the reliance upon analysis of this information in making the choice.” While prior literature has examined the effect of procedural rationality on, for example, strategic decision effectiveness (e.g., Dean and Sharfman, 1996), this literature has, to our knowledge, not empirically examined the effect of procedural rationality on perceived residual uncertainty and whether perceived residual uncertainty affects supplier decision performance. Given the importance of uncertainty reduction in industrial buying decisions, we propose to fill this void and examine the relationship between procedural rationality and uncertainty, and whether uncertainty subsequently impacts supplier decision performance. Due to the relevance of procedural rationality for decision-making in general and, as we suggest, decision uncertainty in particular, it is important to understand how different antecedents impact the use of procedurally rational decision approaches (Dean and Sharfman, 1993a). While prior studies have examined a selective set of drivers of procedural rationality, such as firm size (Elbanna and Child, 2007a), decision importance (Hickson et al., 1986), competitive threat, or stakeholder influence (Dean and Sharfman, 1993a), this research has only found support for a limited number of antecedents. Given the importance of understanding drivers of procedural rationality, we develop a more comprehensive model of factors that affect the use of procedurally rational decision approaches. Additionally, operations management research has started to direct its attention towards China (e.g., Zhao et al., 2006b). China has come particularly into focus since a variety of firms and even economies have shifted parts of their manufacturing value chains towards China. Zhao et al. (2006b, p. 622) note in this respect that “China's transformation from a centrally planned economy to a market economy presents unique problems and opportunities in the management of manufacturing activities, and makes China an interesting research setting for academics, practitioners and investors.” Tsui et al. (2004, p. 133), further comment that “China's dramatic growth […] presents an exciting intellectual puzzle.” The literature also frequently emphasizes the necessity for further generalizability across countries within operations research (e.g., Ahmad and Schroeder, 2003). Hence, comparative research involving the two largest world economies, USA and China, is important and frequently asked for in future research sections (e.g., Elbanna and Child, 2007b and Campbell et al., 2012).