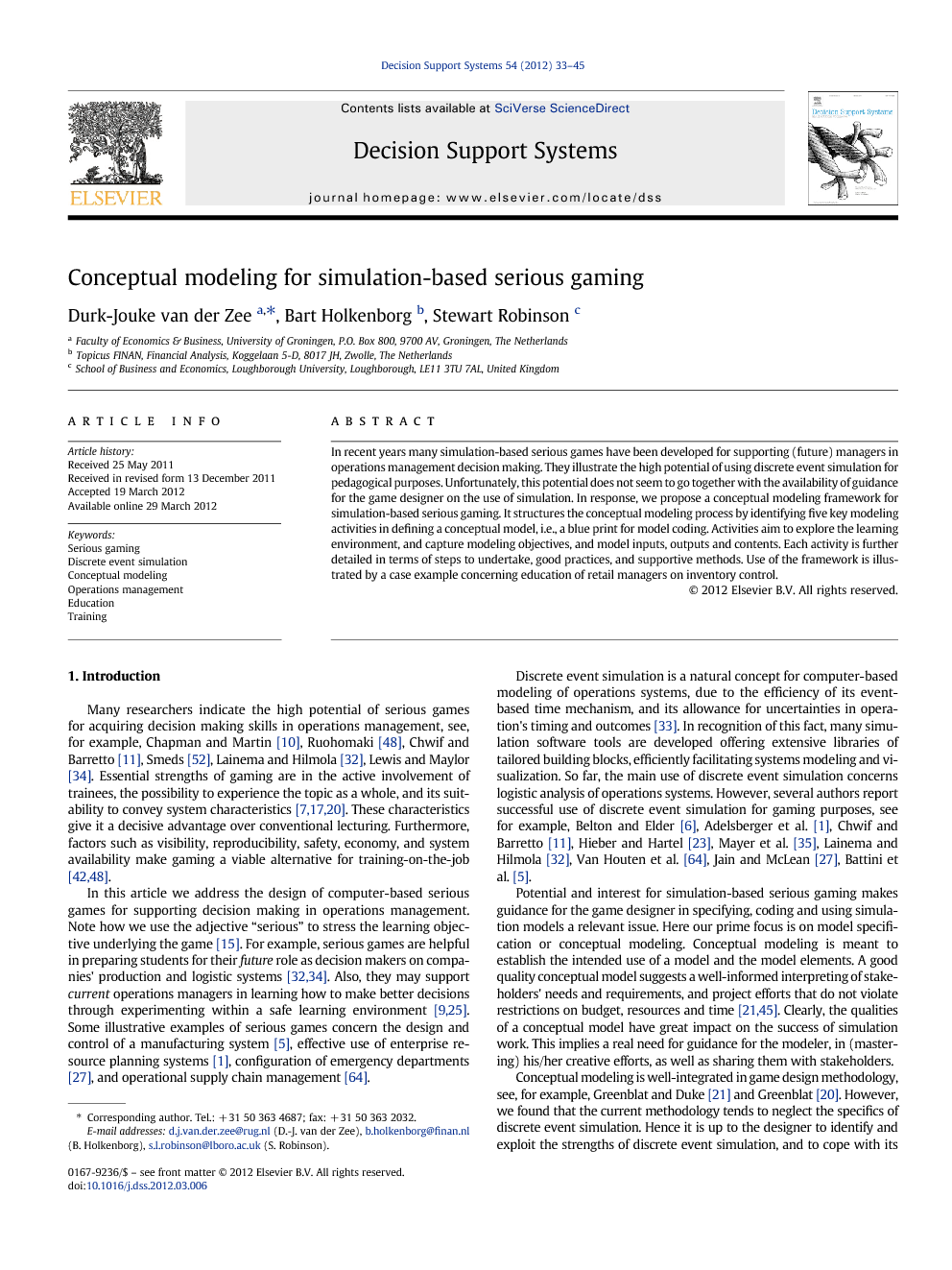 In recent years many simulation-based serious games have been developed for supporting (future) managers in operations management decision making. They illustrate the high potential of using discrete event simulation for pedagogical purposes. Unfortunately, this potential does not seem to go together with the availability of guidance for the game designer on the use of simulation. In response, we propose a conceptual modeling framework for simulation-based serious gaming. It structures the conceptual modeling process by identifying five key modeling activities in defining a conceptual model, i.e., a blue print for model coding. Activities aim to explore the learning environment, and capture modeling objectives, and model inputs, outputs and contents. Each activity is further detailed in terms of steps to undertake, good practices, and supportive methods. Use of the framework is illustrated by a case example concerning education of retail managers on inventory control.

Many researchers indicate the high potential of serious games for acquiring decision making skills in operations management, see, for example, Chapman and Martin [10], Ruohomaki [48], Chwif and Barretto [11], Smeds [52], Lainema and Hilmola [32], Lewis and Maylor [34]. Essential strengths of gaming are in the active involvement of trainees, the possibility to experience the topic as a whole, and its suitability to convey system characteristics [7], [17] and [20]. These characteristics give it a decisive advantage over conventional lecturing. Furthermore, factors such as visibility, reproducibility, safety, economy, and system availability make gaming a viable alternative for training-on-the-job [42] and [48]. In this article we address the design of computer-based serious games for supporting decision making in operations management. Note how we use the adjective “serious” to stress the learning objective underlying the game [15]. For example, serious games are helpful in preparing students for their future role as decision makers on companies' production and logistic systems [32] and [34]. Also, they may support current operations managers in learning how to make better decisions through experimenting within a safe learning environment [9] and [25]. Some illustrative examples of serious games concern the design and control of a manufacturing system [5], effective use of enterprise resource planning systems [1], configuration of emergency departments [27], and operational supply chain management [64]. Discrete event simulation is a natural concept for computer-based modeling of operations systems, due to the efficiency of its event-based time mechanism, and its allowance for uncertainties in operation's timing and outcomes [33]. In recognition of this fact, many simulation software tools are developed offering extensive libraries of tailored building blocks, efficiently facilitating systems modeling and visualization. So far, the main use of discrete event simulation concerns logistic analysis of operations systems. However, several authors report successful use of discrete event simulation for gaming purposes, see for example, Belton and Elder [6], Adelsberger et al. [1], Chwif and Barretto [11], Hieber and Hartel [23], Mayer et al. [35], Lainema and Hilmola [32], Van Houten et al. [64], Jain and McLean [27], Battini et al. [5]. Potential and interest for simulation-based serious gaming makes guidance for the game designer in specifying, coding and using simulation models a relevant issue. Here our prime focus is on model specification or conceptual modeling. Conceptual modeling is meant to establish the intended use of a model and the model elements. A good quality conceptual model suggests a well-informed interpreting of stakeholders' needs and requirements, and project efforts that do not violate restrictions on budget, resources and time [21] and [45]. Clearly, the qualities of a conceptual model have great impact on the success of simulation work. This implies a real need for guidance for the modeler, in (mastering) his/her creative efforts, as well as sharing them with stakeholders. Conceptual modeling is well-integrated in game design methodology, see, for example, Greenblat and Duke [21] and Greenblat [20]. However, we found that the current methodology tends to neglect the specifics of discrete event simulation. Hence it is up to the designer to identify and exploit the strengths of discrete event simulation, and to cope with its weaknesses. Here discrete event simulation's basic strengths follow from its choice of time concept, the notion of variability in a system's operations, and the availability of tools offering building blocks that map real-world entities in an efficient and realistic way. Weaknesses follow from the “analysis perspective” dominating current use of discrete event simulation. Simulation literature and tools tend not to take a pedagogic perspective in model set-up. They have no notion of players or their interaction with the model [32], [54] and [60]. In response to the observed lack of guidance in simulation-based serious game design we propose a conceptual modeling framework. Essentially, it suggests a step-wise approach for specifying the simulation model facilitating the game, and introduces the means to do so. Ideally, both model effectiveness and modeling efficiency may benefit from such a structured approach. Hence the potential of games for supporting decision making in operations management may be increased. The proposed framework results from modifications and extensions of the conceptual modeling framework described in Robinson [46]. Changes to the framework reflect a change of modeling objectives (“learning” instead of “logistical analysis”), and users', i.e., players', needs and requirements. Use of the new framework is related to game design methodology as proposed by Greenblat [20]. Framework application is illustrated by a case study concerning education of retail managers on inventory control. The remainder of the paper is organised as follows. In Section 2 we introduce the research methodology underlying set-up and use of the new conceptual modeling framework for simulation-based serious gaming. In Section 3, the framework is described in detail. Then the use of the framework is illustrated by a case example (Section 4). Section 5 evaluates contributions made by the framework. Finally, in Section 6, major findings are summarized.