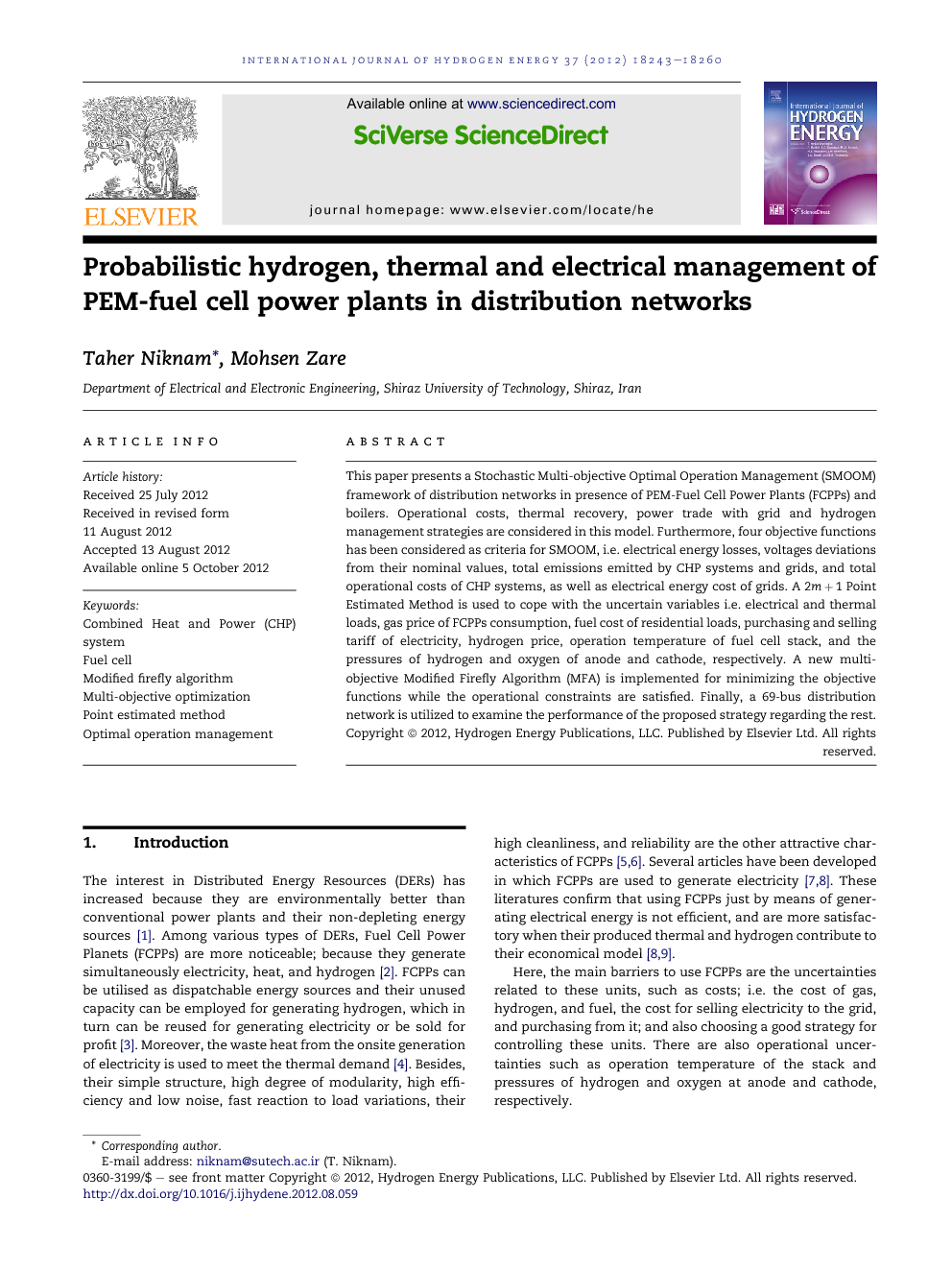 This paper presents a Stochastic Multi-objective Optimal Operation Management (SMOOM) framework of distribution networks in presence of PEM-Fuel Cell Power Plants (FCPPs) and boilers. Operational costs, thermal recovery, power trade with grid and hydrogen management strategies are considered in this model. Furthermore, four objective functions has been considered as criteria for SMOOM, i.e. electrical energy losses, voltages deviations from their nominal values, total emissions emitted by CHP systems and grids, and total operational costs of CHP systems, as well as electrical energy cost of grids. A 2m + 1 Point Estimated Method is used to cope with the uncertain variables i.e. electrical and thermal loads, gas price of FCPPs consumption, fuel cost of residential loads, purchasing and selling tariff of electricity, hydrogen price, operation temperature of fuel cell stack, and the pressures of hydrogen and oxygen of anode and cathode, respectively. A new multi-objective Modified Firefly Algorithm (MFA) is implemented for minimizing the objective functions while the operational constraints are satisfied. Finally, a 69-bus distribution network is utilized to examine the performance of the proposed strategy regarding the rest.

The interest in Distributed Energy Resources (DERs) has increased because they are environmentally better than conventional power plants and their non-depleting energy sources [1]. Among various types of DERs, Fuel Cell Power Planets (FCPPs) are more noticeable; because they generate simultaneously electricity, heat, and hydrogen [2]. FCPPs can be utilised as dispatchable energy sources and their unused capacity can be employed for generating hydrogen, which in turn can be reused for generating electricity or be sold for profit [3]. Moreover, the waste heat from the onsite generation of electricity is used to meet the thermal demand [4]. Besides, their simple structure, high degree of modularity, high efficiency and low noise, fast reaction to load variations, their high cleanliness, and reliability are the other attractive characteristics of FCPPs [5] and [6]. Several articles have been developed in which FCPPs are used to generate electricity [7] and [8]. These literatures confirm that using FCPPs just by means of generating electrical energy is not efficient, and are more satisfactory when their produced thermal and hydrogen contribute to their economical model [8] and [9]. Here, the main barriers to use FCPPs are the uncertainties related to these units, such as costs; i.e. the cost of gas, hydrogen, and fuel, the cost for selling electricity to the grid, and purchasing from it; and also choosing a good strategy for controlling these units. There are also operational uncertainties such as operation temperature of the stack and pressures of hydrogen and oxygen at anode and cathode, respectively. Interaction between FCPPs and thermal and electrical loads can be investigated regardless of the Distribution Networks (DNs) [7], [10] and [11], but connecting FCPPs to the power systems can affect the technical aspects of these networks and a review of the affected issues is required. The main goal of Optimal Operation Management (OOM) is to minimise the predefined objective functions while regulating the voltage of the feeders and reactive power (or power factor) at substations using the Under Load Tap Changer (ULTC) transformers, as well as the shunt capacitors [12]. Connecting FCPPs to DNs is an opportunity for new control variables to improve the performance of the system. Several articles have been already developed with some control algorithms for OOM of DNs of which the topic was Volt/Var Control (VVC). In [13], a genetic algorithm is used to solve the VVC problem in presence of Distributed Generation (DG) units, voltage regulators, local controllers, and load tap changers. In [14], the VVC problem has been solved while the voltages deviations of the load nodes from their nominal values are considered as the objective function. Vovos et al. [15] presented an intelligent reactive power and voltage control in presence of DG units, of which the solutions are similar to those of centralised management. Niknam et al. [16] suggested a cost based compensation methodology for the VVC problem considering the effects of DG units. In [17], the impact of DG units on the available voltage and reactive power control has been investigated and a proper method of coordinating DG units and other traditional voltage and reactive power control apparatus has been proposed. In [18], a Probabilistic Load Flow (PLF) to cope with the fluctuating variables of the VVC problem has been proposed. An SMOOM of DNs including FCPPs is the main goal of this article. In some situations it can be beneficial to reserve the hydrogen in a tank to be used later or be sold at the end of the day. Also, a boiler exists beside FCPP to supply the thermal loads which are greater than thermal production of FCPP. The set of FCPP, the reserve hydrogen tank and the boiler construct the CHP system. The output power of FCPPs depends on factors such as operation temperature, and pressures of hydrogen and oxygen of cathode and anode, respectively; considering all variations of these variables during operation results in high computation burden. Therefore, these variables are considered as stochastic variables. Furthermore, uncertainties such as the electrical and thermal loads, the price of gas for FCPP, the cost of fuel for residential loads, the tariffs of purchasing and selling electricity, and the price of selling hydrogen are modeled through the Probability Distribution Functions (PDFs). In this regard, a 2m + 1 Point Estimated Method (PEM) [19] is used to cope with the PLF. The objective functions of the problem are electrical energy losses of distribution lines, voltages deviations, produced emissions, the electrical energy costs of distribution companies and operational costs of the CHP system. An evolutionary method based on Modified Firefly Algorithm (MFA) [20] is proposed to solve this problem and an interactive fuzzy satisfying method [21] is used to solve the Multi-objective Optimization Problem (MOP). The contributions of this paper with respect to the previous ones can be summarized as follows: (i) the SMOOM is formulated in a stochastic framework to consider the system uncertainties as well as random operation characteristics of PEM-FCPPs; (ii) different operation strategies of PEM-FCPPs and their effects on the SMOOM problem are investigated and compared; and (iii) a new MFA is proposed to solve the mixed-Integer non-linear programming problem while the interactive fuzzy satisfying method is used to cope with the MOP.

This paper offers a stochastic multi-objective optimal operation management of DN including the CHP systems. The proposed CHP system is comprised of a FCPP, a hydrogen tank, and a reformer. A boiler is also improvised to meet the excess thermal loads. Different strategies such as fixed hydrogen strategy, hydrogen storage strategy, and without hydrogen strategy are investigated. a modified firefly algorithm is proposed for minimizing the electrical energy loss, voltage deviations, the emission of the CHP system and the grid, and the cost of electrical energy as the objective functions. In addition, the uncertainties related to MOOM are considered in a stochastic framework, and a 2m + 1 point estimated method is proposed to cope with the PLF equations. Several conclusions made of SMOOM problem are as follows: - Hydrogen production of CHP system has a major role in optimizing the operational management of DNs. - In fixed hydrogen production strategy, the emission objective moves toward the large values. This objective is closely uncontrollable which is highlighted in MOP where all objective functions should be controlled, simultaneously. This strategy obtains a suitable result for the cost objective. - In strategy of without hydrogen, the cost objective function has the worst result between all strategies. It means that this objective is somehow uncontrollable. The emission objective has an appropriate result in this strategy. - The hydrogen storage strategy has resolved the drawbacks of two previous strategies and can control all the objective functions. Here, if the determined stat of the DN cannot satisfy the preferences of DSO, the problem can be run for the second time with similar or different RMVs in order to change the operational conditions. - Different strategies had no effect on the result of loss and voltage deviation objectives when they are solved as single objectives independently. However, in the MOP, different strategies affect all the objectives due to the conflicting between them. These strategies directly affect the objectives of emission and cost, while indirectly influence the objectives of loss and voltage deviation. It confirms that the proposed optimal operational management problem should be arranged in a multi-objective framework. - The PDFs of objective functions show that the cost objective accepts more effects from the considered uncertainties in comparison to the other objectives. Furthermore, an interactive fuzzy satisfying method is proposed to resolve the trade-off between conflicting objective functions. This method permits the DSO to determine the operating conditions based on their experiences and preferences.