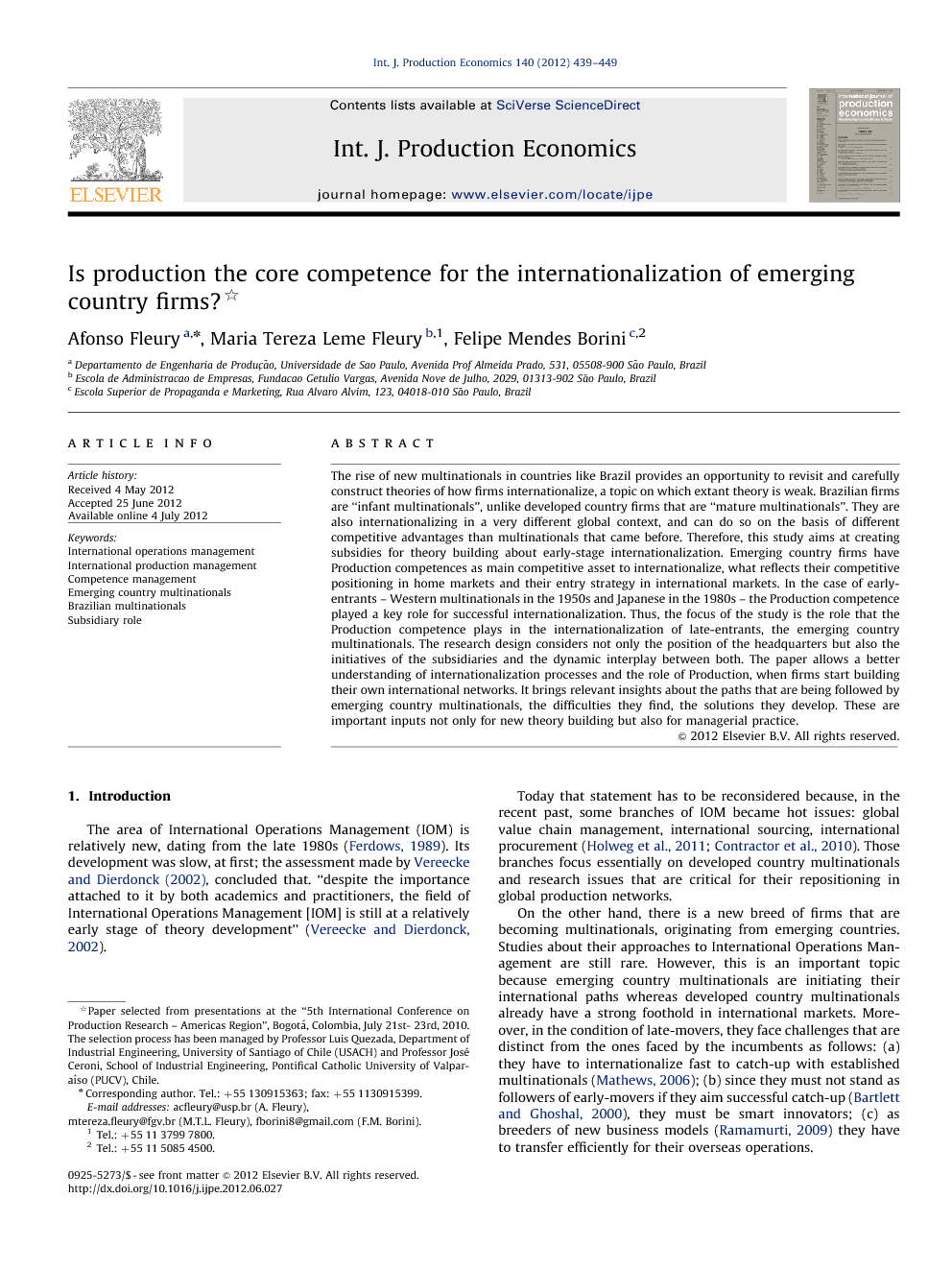 The area of International Operations Management (IOM) is relatively new, dating from the late 1980s (Ferdows, 1989). Its development was slow, at first; the assessment made by Vereecke and Dierdonck (2002), concluded that. “despite the importance attached to it by both academics and practitioners, the field of International Operations Management [IOM] is still at a relatively early stage of theory development” (Vereecke and Dierdonck, 2002). Today that statement has to be reconsidered because, in the recent past, some branches of IOM became hot issues: global value chain management, international sourcing, international procurement (Holweg et al., 2011 and Contractor et al., 2010). Those branches focus essentially on developed country multinationals and research issues that are critical for their repositioning in global production networks. On the other hand, there is a new breed of firms that are becoming multinationals, originating from emerging countries. Studies about their approaches to International Operations Management are still rare. However, this is an important topic because emerging country multinationals are initiating their international paths whereas developed country multinationals already have a strong foothold in international markets. Moreover, in the condition of late-movers, they face challenges that are distinct from the ones faced by the incumbents as follows: (a) they have to internationalize fast to catch-up with established multinationals (Mathews, 2006); (b) since they must not stand as followers of early-movers if they aim successful catch-up (Bartlett and Ghoshal, 2000), they must be smart innovators; (c) as breeders of new business models (Ramamurti, 2009) they have to transfer efficiently for their overseas operations. Therefore, in principle, emerging country multinationals, since the very start of their internationalization processes, should be “making the most of their foreign factories”, in the expression adopted by Ferdows (1997). In the different taxonomies proposed for the roles of subsidiaries, emerging country multinationals’ subsidiaries should perform as strategic leaders (Bartlett and Ghoshal, 1989) or have world mandates (Birkinshaw and Morrison, 1995) as early as possible. Historically, the internationalization of firms is supported by novel productive models: the internationalization of American firms in the early 20th century was supported by the American Manufacturing System (Best, 1990) and the expansion of Japanese firms in the late 20th century was based on the Japanese Production Model (Womack et al., 1990). The same seems to be the case for firms from emerging economies which rely on distinctive competences in Production at home for successful internationalization (Zeng and Williamson, 2007 and Ramamurti, 2009). The question that remains is: are Production competences the main driver for the international expansion of emerging country multinationals? We address that question through the application of a competence-based management/competence-based competition approach (Hamel and Prahalad, 1994, Hamel and Heene, 1994 and Teece, 2009). In other words, we depart from the standpoint that what provides competitive advantage for any firm is the set of organizational competences they develop. Thus, for a firm to emerge as a multinational it must rely on a distinctive set of competences when compared to international competitors and, from then on, build a dynamic relationship between parent company and subsidiaries for the fast and continuous enhancement of organizational competences, irrespective of location and mode of entry. The reasons for the choice of the competence-based management/competence-based competition approach are the following: (a) the multinational might be considered as a network of competences geographically dispersed (Rugman and Verbeke, 2001); (b) competence formation at firm level suffers a strong influence from the local environment (Kogut, 1991 and Leo, 1994), what differentiates multinationals originated in different countries; (c) more than seeking to understand the environmental factors that may motivate companies to go international, this approach prioritizes the issue of how companies create dynamic capabilities to become internationally competitive (Teece et al., 1997 and Knight and Kim, 2009); (d) the competence-based competition approach (Prahalad and Hamel, 1990 and Hamel and Heene, 1994), which had enormous repercussions in the early 1990s, has resurged as the basis for a large number of studies in recent years (Barney and Clark, 2007, Verbeke, 2009 and Teece, 2009); for instance, Verbeke (2009:84) assumes that “… the notion of core competencies is largely equivalent to the higher-order concept of Firm Specific Advantage,…”. We will initially elaborate the analytical framework, based on the construct organizational competences; this will allow us to refine the research questions. The analytical framework will be applied to the group of Brazilian multinationals, as a representative of multinationals from the emerging countries. Through a survey research method, we will analyze their internationalization process in two moments in time: 2006 and 2010. The first survey was made during the entry phase of Brazilian multinationals and collected information about the role of the Production competence, amongst the other organizational competences, both at the parent company and the subsidiaries. The second survey had the same aim, but it generated information related to the expansion phase of Brazilian multinationals. The results showed that Brazilian multinationals are not yet integrating their subsidiaries fast and effectively; they are not profiting from their foreignness. Only when the Production competence is considered, the learning loop is being closed: there is an initial transference from the headquarter (HQ) to subsidiaries and, after some time, subsidiaries become competent and start transferring competences for the HQ. But that seems not be the case in regards to the other organizational competences. In other words, only the Production competence has entered a virtuous cycle. Therefore, Brazilian multinationals are not yet making the most of their foreign subsidiaries.