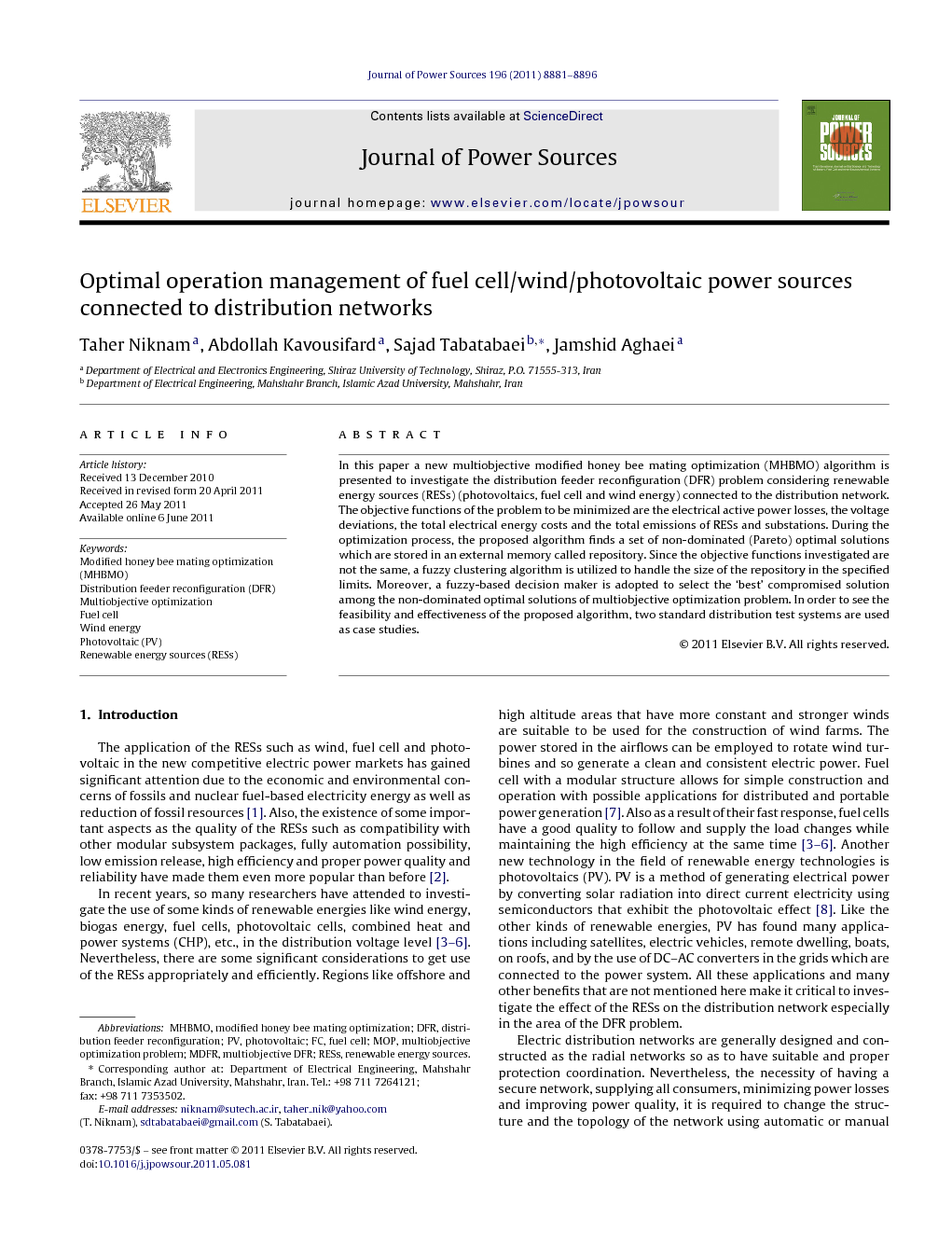 In this paper a new multiobjective modified honey bee mating optimization (MHBMO) algorithm is presented to investigate the distribution feeder reconfiguration (DFR) problem considering renewable energy sources (RESs) (photovoltaics, fuel cell and wind energy) connected to the distribution network. The objective functions of the problem to be minimized are the electrical active power losses, the voltage deviations, the total electrical energy costs and the total emissions of RESs and substations. During the optimization process, the proposed algorithm finds a set of non-dominated (Pareto) optimal solutions which are stored in an external memory called repository. Since the objective functions investigated are not the same, a fuzzy clustering algorithm is utilized to handle the size of the repository in the specified limits. Moreover, a fuzzy-based decision maker is adopted to select the ‘best’ compromised solution among the non-dominated optimal solutions of multiobjective optimization problem. In order to see the feasibility and effectiveness of the proposed algorithm, two standard distribution test systems are used as case studies.

The application of the RESs such as wind, fuel cell and photovoltaic in the new competitive electric power markets has gained significant attention due to the economic and environmental concerns of fossils and nuclear fuel-based electricity energy as well as reduction of fossil resources [1]. Also, the existence of some important aspects as the quality of the RESs such as compatibility with other modular subsystem packages, fully automation possibility, low emission release, high efficiency and proper power quality and reliability have made them even more popular than before [2]. In recent years, so many researchers have attended to investigate the use of some kinds of renewable energies like wind energy, biogas energy, fuel cells, photovoltaic cells, combined heat and power systems (CHP), etc., in the distribution voltage level [3], [4], [5] and [6]. Nevertheless, there are some significant considerations to get use of the RESs appropriately and efficiently. Regions like offshore and high altitude areas that have more constant and stronger winds are suitable to be used for the construction of wind farms. The power stored in the airflows can be employed to rotate wind turbines and so generate a clean and consistent electric power. Fuel cell with a modular structure allows for simple construction and operation with possible applications for distributed and portable power generation [7]. Also as a result of their fast response, fuel cells have a good quality to follow and supply the load changes while maintaining the high efficiency at the same time [3], [4], [5] and [6]. Another new technology in the field of renewable energy technologies is photovoltaics (PV). PV is a method of generating electrical power by converting solar radiation into direct current electricity using semiconductors that exhibit the photovoltaic effect [8]. Like the other kinds of renewable energies, PV has found many applications including satellites, electric vehicles, remote dwelling, boats, on roofs, and by the use of DC–AC converters in the grids which are connected to the power system. All these applications and many other benefits that are not mentioned here make it critical to investigate the effect of the RESs on the distribution network especially in the area of the DFR problem. Electric distribution networks are generally designed and constructed as the radial networks so as to have suitable and proper protection coordination. Nevertheless, the necessity of having a secure network, supplying all consumers, minimizing power losses and improving power quality, it is required to change the structure and the topology of the network using automatic or manual switches. However, the radial structure of the networks and discrete nature of the switches is a main obstacle to get use of the classical optimization methods in the multiobjective distribution feeder reconfiguration (MDFR) problem. Classical optimization methods have suggested transforming the multiobjective optimization problem to a single objective optimization problem [9] and [10]. However, in these methods extensive computational resources (memories) are needed to find the multiple optima. In the area of MDFR problem, Das [11] has presented a new multiobjective approach based on the fuzzy set theory to solve the DFR problem. Vanderson Gomes et al. have suggested a new heuristic method to change the configuration of the distribution systems [12]. Kim et al. [13] have suggested a new method based on neural network in order to identify the configuration of the network corresponding to different load levels. Taylor and Lubkeman [7] have presented an expert system to reduce the search space by the use of heuristic rules. Kashem et al. [14] have introduced a new algorithm based on the distance measurement to find a loop in the network, and then a switching plan is used to enhance the load balancing in the mentioned loop. Baran and Wu [15] have used a mixed integer programming (MIP) to solve the load balancing problem and power loss reduction in the network. In order to supply the purpose of load balancing and service restoration in two feeder networks, an algorithm based on the network reconfiguration has been presented by Zhou et al. [16]. Also, in [17] and [18] Niknam has proposed a method based on the evolutionary algorithms to convert multiobjective DFR problem to an equivalent augmented single objective problem. Here again too extensive computational resources and many runs are needed to find the solutions; therefore the efficiency of the algorithm will be reduced. Also, the new hybrid algorithm used by Niknam in [19] to solve the multiobjective DFR problem results in a single solution which does not observe the Pareto optimality concept. In fact it has the main disadvantage of ignoring many other good candidate solutions that can be supposed as optima. In this paper a new modified honey bee mating evolutionary algorithm is utilized to solve MDFR problem while the effect of RESs is considered. The traditional HBMO suffered from two main shortcomings: (I) dependency on the algorithm parameters, and (II) the possibility of being trapped in local optima. Therefore, in this paper a new modification process is proposed to enhance the performance of the algorithm. Also, during the optimization process, the set of obtained non-dominated solutions, called Pareto-optimal solutions, are stored in the repository. In order to control the size of the repository, a fuzzy clustering technique is utilized.

In this paper an appropriate modified algorithm based on HBMO (MHBMO) algorithm is introduced to solve the multiobjective DFR problem considering RESs. The objective functions consist of the total active power losses, the voltage deviation of each bus from its nominal value, the total cost of the system (including the grid and the RESs) and the total emission produced by the system. In the proposed method, a set of non-dominated solutions called Pareto-optimal solutions are found and stored in the repository which its size is controlled by the use of fuzzy clustering method. Also a fuzzy-based decision maker was introduced to select the ‘best’ compromised solution according to his/her experiences and preferences. To improve the original HBMO algorithm, the mating process is enhanced so that to improve the exploration ability of the algorithm in the entire search space. In order to see the feasibility and ability of the proposed method, MHBMO algorithm is applied to two test systems and the results are compared by some of the most famous optimization algorithms. The results show the good performance and credibility of the proposed method in the MDFR problem. Also it was shown that the behaviors of the voltage deviation and total emission objective functions are similar to each other while the cost objective function has a conflicting behavior regarding the other objective functions. Also, the superiority of the proposed method is shown with respect to the other optimization methods in the area.