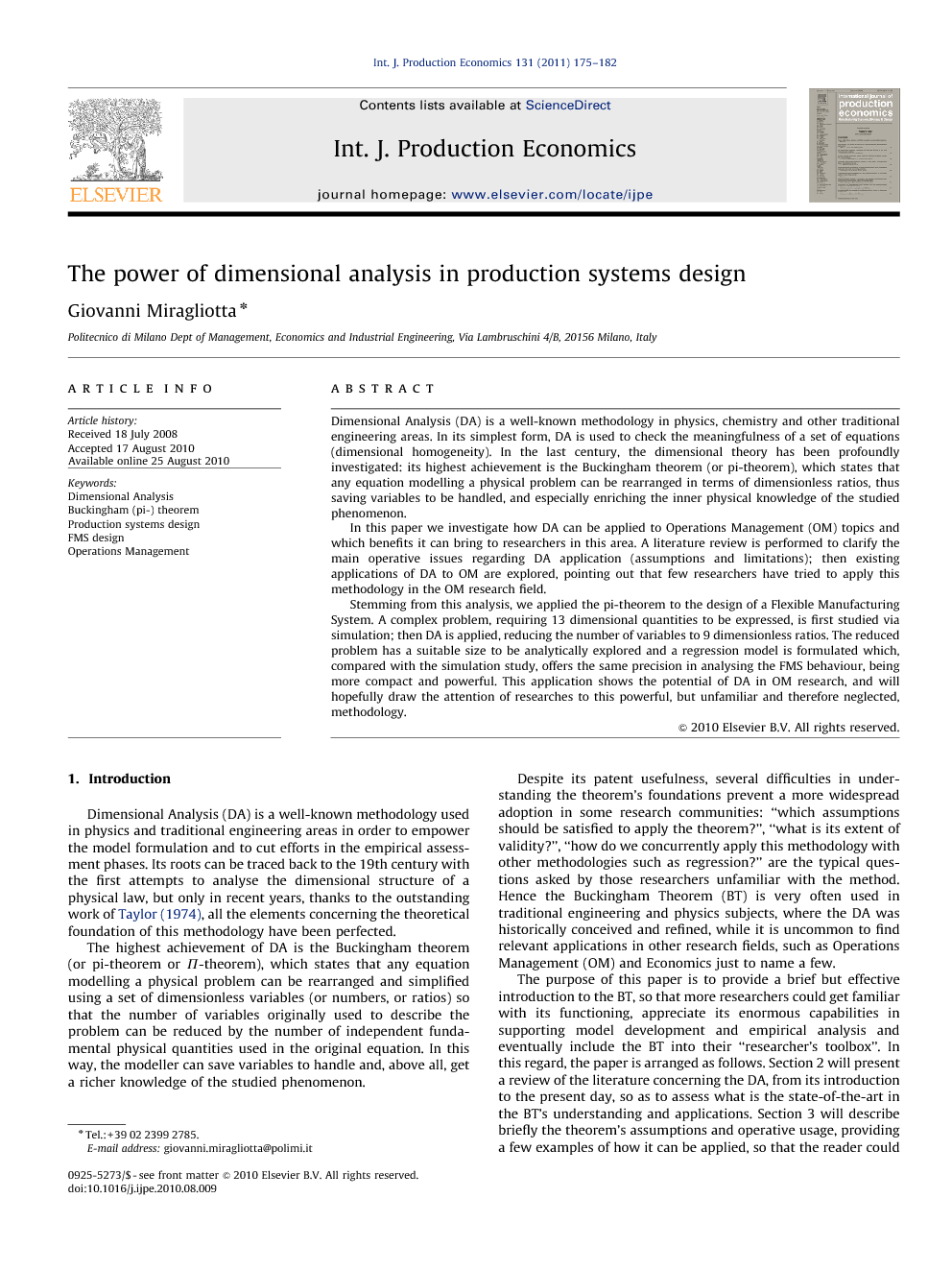 Dimensional Analysis (DA) is a well-known methodology in physics, chemistry and other traditional engineering areas. In its simplest form, DA is used to check the meaningfulness of a set of equations (dimensional homogeneity). In the last century, the dimensional theory has been profoundly investigated: its highest achievement is the Buckingham theorem (or pi-theorem), which states that any equation modelling a physical problem can be rearranged in terms of dimensionless ratios, thus saving variables to be handled, and especially enriching the inner physical knowledge of the studied phenomenon. In this paper we investigate how DA can be applied to Operations Management (OM) topics and which benefits it can bring to researchers in this area. A literature review is performed to clarify the main operative issues regarding DA application (assumptions and limitations); then existing applications of DA to OM are explored, pointing out that few researchers have tried to apply this methodology in the OM research field. Stemming from this analysis, we applied the pi-theorem to the design of a Flexible Manufacturing System. A complex problem, requiring 13 dimensional quantities to be expressed, is first studied via simulation; then DA is applied, reducing the number of variables to 9 dimensionless ratios. The reduced problem has a suitable size to be analytically explored and a regression model is formulated which, compared with the simulation study, offers the same precision in analysing the FMS behaviour, being more compact and powerful. This application shows the potential of DA in OM research, and will hopefully draw the attention of researches to this powerful, but unfamiliar and therefore neglected, methodology.

Dimensional Analysis (DA) is a well-known methodology used in physics and traditional engineering areas in order to empower the model formulation and to cut efforts in the empirical assessment phases. Its roots can be traced back to the 19th century with the first attempts to analyse the dimensional structure of a physical law, but only in recent years, thanks to the outstanding work of Taylor (1974), all the elements concerning the theoretical foundation of this methodology have been perfected. The highest achievement of DA is the Buckingham theorem (or pi-theorem or Π-theorem), which states that any equation modelling a physical problem can be rearranged and simplified using a set of dimensionless variables (or numbers, or ratios) so that the number of variables originally used to describe the problem can be reduced by the number of independent fundamental physical quantities used in the original equation. In this way, the modeller can save variables to handle and, above all, get a richer knowledge of the studied phenomenon. Despite its patent usefulness, several difficulties in understanding the theorem’s foundations prevent a more widespread adoption in some research communities: “which assumptions should be satisfied to apply the theorem?”, “what is its extent of validity?”, “how do we concurrently apply this methodology with other methodologies such as regression?” are the typical questions asked by those researchers unfamiliar with the method. Hence the Buckingham Theorem (BT) is very often used in traditional engineering and physics subjects, where the DA was historically conceived and refined, while it is uncommon to find relevant applications in other research fields, such as Operations Management (OM) and Economics just to name a few. The purpose of this paper is to provide a brief but effective introduction to the BT, so that more researchers could get familiar with its functioning, appreciate its enormous capabilities in supporting model development and empirical analysis and eventually include the BT into their “researcher’s toolbox”. In this regard, the paper is arranged as follows. Section 2 will present a review of the literature concerning the DA, from its introduction to the present day, so as to assess what is the state-of-the-art in the BT’s understanding and applications. Section 3 will describe briefly the theorem’s assumptions and operative usage, providing a few examples of how it can be applied, so that the reader could become more familiar with it. Section 4 will then present an application of the BT to the design of a Flexible Manufacturing System (FMS), discussing how quantities and variables should be reinterpreted to properly apply the theorem. Then, Section 5 will put forward some concluding remarks, and provide some suggestions about other OM research areas in which the theorem could be successfully applied.

In this paper we presented a new application of the Buckingham Theorem (BT) to a quite complex OM problem, such as the design of an FMS. After providing an introductory review on the method and on its application, we used the BT to develop a regression model to estimate the throughput of an FMS depending on 12 input parameters embracing the most relevant (configuration and management) decisions. Even in this simplified context, the application was successful as it allowed one to sharply reduce the number of tests that should have been run to gather all the data needed to feed the regression model. Moreover, the method immediately highlighted the similarity relationships within the system, which gives greater understanding on the FMS functioning, both for research and for teaching purposes. This application of DA presented in this paper can be paired up with the work of Daganzo (1987) to maintain that the area of production and distribution systems’ design can be profitably addressed with the DA, even though the limited number of published studies does not allow one to perfectly understand the capabilities of the methodology. An extension of this study is being planned in order to bring further evidence in this direction. We believe that other OM problems could benefit from DA. In this regard, there are some research areas that have already been studied with DA, some directly (e.g. inventory management) and some indirectly (see for instance the data mining techniques based on DA) as remarked in Section 2. Still, there are several OM areas that are rather unaware of this methodology. For instance, Miragliotta and Perona (2004) presented a study on how supply chain complexity (quantitatively measured in the following processes: sales, inbound and outbound logistics, manufacturing and engineering, and new product development) can be correlated to bottom line performances; that study required expensive interviews and massive data collection effort, and the robustness of the outcomes was conditioned by the amount of available data. The application of the BT right in the research design phase could have improved the sample selection and the questionnaire design, refocusing the quantitative data to be gathered, and eventually increasing the quality of the research. Actually, the application of the BT to the rejuvenation of that research stream is under evaluation. Another example of OM topics that could be addressed by means of DA is that of performance measurement: if we consider the best practices in KPI design and measurement (for instance, those suggested by the SCOR model, www.supply-chain.org) we see that those cockpits are basically built upon isolated, dimensional indicators, to be measured and compared over time. Actually, we may think that the performances of one organisation is explained by a more profound relationship between productivity, service, quality and so on, and DA could provide a brand new approach to address this matter. Of course, a sound theoretical background is needed in order to define the starting dimensional quantities and to assert that they represent a complete set of explaining variables in a specific context, but once they are available, the benefits of the DA adoption are clear. There is another valuable aspect of DA, we think, not only with respect to results but especially from a managerial point of view. In fact, we deem the traditional approaches to these topics are failing to bring innovation in today’s management practices: the DA would probably shed new light on the way processes’ outcomes mix each others to influence the company performances, also inspiring new approaches to improvement actions and budget allocation, more driven by a systemic vision rather than considering only local phenomena: like Reynold’s number does not focus on velocity or viscosity or pipe length separately, but on their non-linear interaction; the same could be true for a company or for a production system. Production and distribution systems’ design, complexity management and control, performance measurement are, in our opinion, the three areas of Operations Management in which Dimensional Analysis could represent a breakthrough. Of course, this intuition will have to be confirmed by new and inspired research.