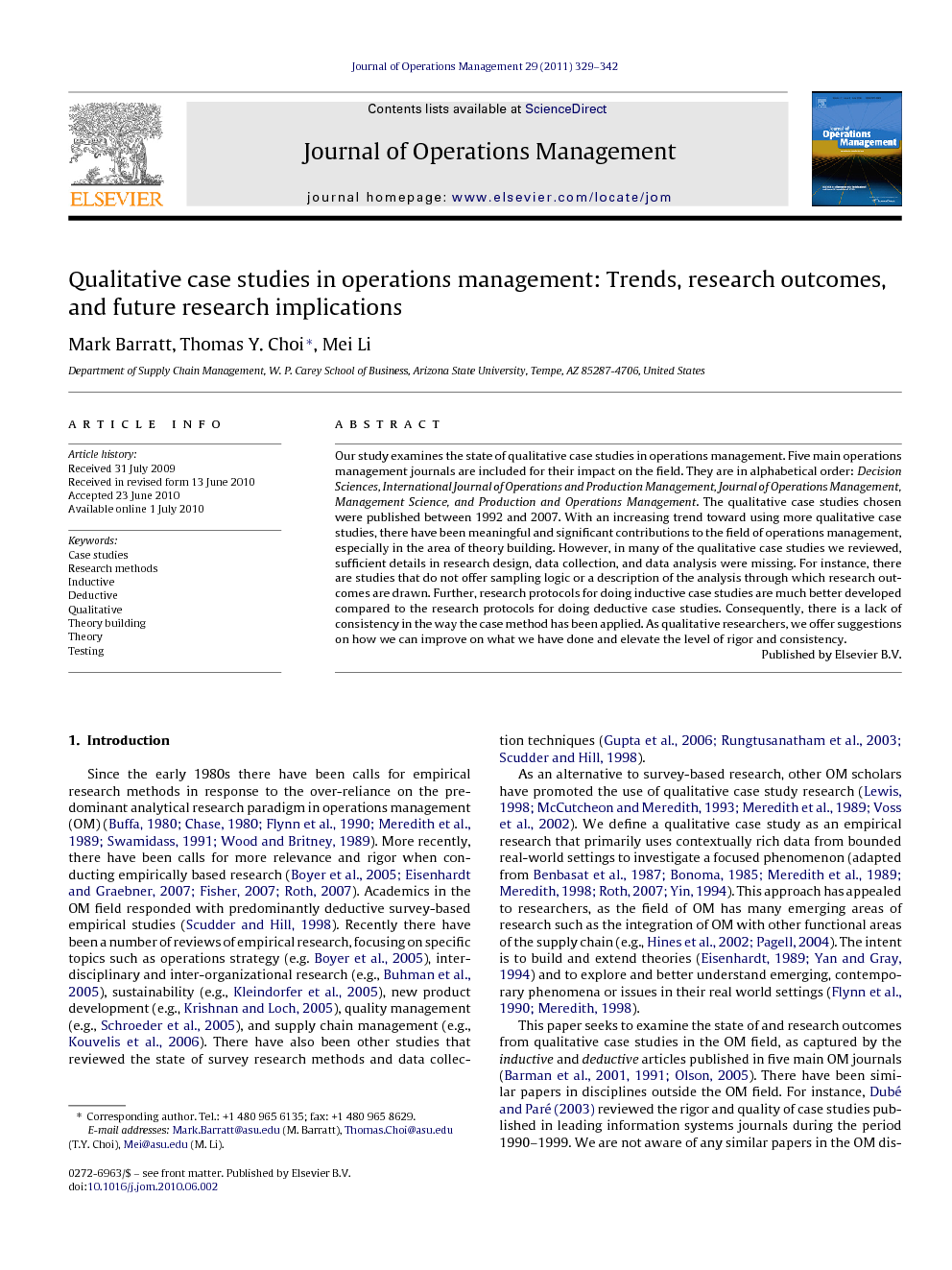 Since the early 1980s there have been calls for empirical research methods in response to the over-reliance on the predominant analytical research paradigm in operations management (OM) (Buffa, 1980, Chase, 1980, Flynn et al., 1990, Meredith et al., 1989, Swamidass, 1991 and Wood and Britney, 1989). More recently, there have been calls for more relevance and rigor when conducting empirically based research (Boyer et al., 2005, Eisenhardt and Graebner, 2007, Fisher, 2007 and Roth, 2007). Academics in the OM field responded with predominantly deductive survey-based empirical studies (Scudder and Hill, 1998). Recently there have been a number of reviews of empirical research, focusing on specific topics such as operations strategy (e.g. Boyer et al., 2005), interdisciplinary and inter-organizational research (e.g., Buhman et al., 2005), sustainability (e.g., Kleindorfer et al., 2005), new product development (e.g., Krishnan and Loch, 2005), quality management (e.g., Schroeder et al., 2005), and supply chain management (e.g., Kouvelis et al., 2006). There have also been other studies that reviewed the state of survey research methods and data collection techniques (Gupta et al., 2006, Rungtusanatham et al., 2003 and Scudder and Hill, 1998). As an alternative to survey-based research, other OM scholars have promoted the use of qualitative case study research (Lewis, 1998, McCutcheon and Meredith, 1993, Meredith et al., 1989 and Voss et al., 2002). We define a qualitative case study as an empirical research that primarily uses contextually rich data from bounded real-world settings to investigate a focused phenomenon (adapted from Benbasat et al., 1987, Bonoma, 1985, Meredith et al., 1989, Meredith, 1998, Roth, 2007 and Yin, 1994). This approach has appealed to researchers, as the field of OM has many emerging areas of research such as the integration of OM with other functional areas of the supply chain (e.g., Hines et al., 2002 and Pagell, 2004). The intent is to build and extend theories (Eisenhardt, 1989 and Yan and Gray, 1994) and to explore and better understand emerging, contemporary phenomena or issues in their real world settings (Flynn et al., 1990 and Meredith, 1998). This paper seeks to examine the state of and research outcomes from qualitative case studies in the OM field, as captured by the inductive and deductive articles published in five main OM journals ( Barman et al., 2001, Barman et al., 1991 and Olson, 2005). There have been similar papers in disciplines outside the OM field. For instance, Dubé and Paré (2003) reviewed the rigor and quality of case studies published in leading information systems journals during the period 1990–1999. We are not aware of any similar papers in the OM discipline, and we intend to fill this void. The purpose of our paper is four-fold. (1) It provides a summarizing review of the numerous guidelines for undertaking inductive-based case study research. (2) It captures the state of the scarce literature for undertaking deductive-based case study research. (3) It provides a review of the current state (1992–2007) of qualitative case studies and performs a gap analysis between the guidelines and the current state. The journals include four US-based journals and one European-based—Decision Sciences (DS), International Journal of Operations and Production Management (IJOPM), Journal of Operations Management (JOM), Management Science (MS), and Production and Operations Management (POM). 1 (4) It provides a review of theoretical contributions made by the use of qualitative case studies and identifies subsequent opportunities to improve such theoretical contributions. We begin by reviewing the literature on qualitative case-study methods, for both inductive and deductive approaches, focusing on the various research frameworks and guidelines that have been proposed to facilitate increased usage and level of rigor. After this, we present our research methodology and the results of our analyses. We then focus on the details of contributions made by the qualitative case studies, relative to the existing guidelines. We end with a general discussion and implications for future qualitative case studies.