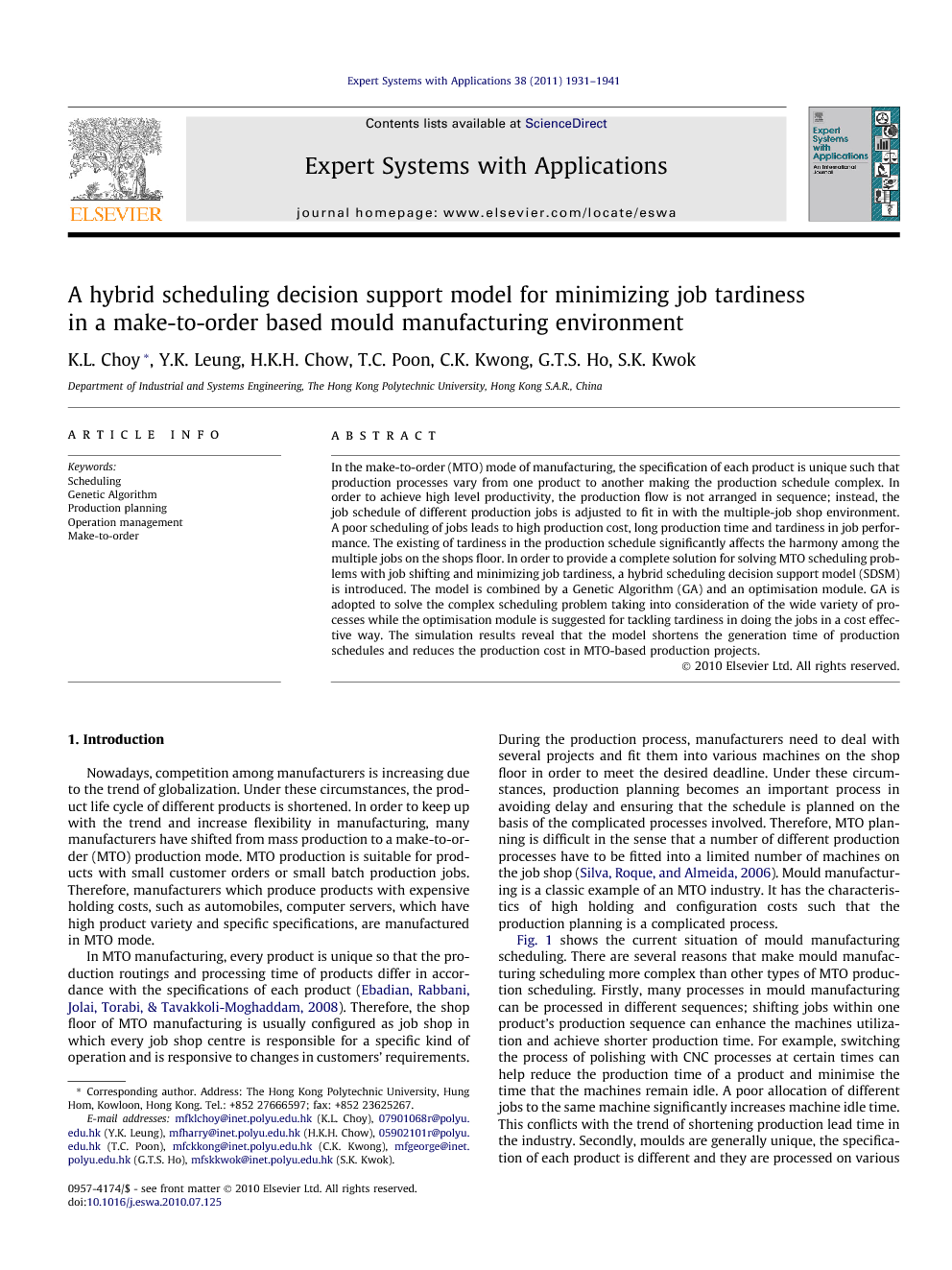 In the make-to-order (MTO) mode of manufacturing, the specification of each product is unique such that production processes vary from one product to another making the production schedule complex. In order to achieve high level productivity, the production flow is not arranged in sequence; instead, the job schedule of different production jobs is adjusted to fit in with the multiple-job shop environment. A poor scheduling of jobs leads to high production cost, long production time and tardiness in job performance. The existing of tardiness in the production schedule significantly affects the harmony among the multiple jobs on the shops floor. In order to provide a complete solution for solving MTO scheduling problems with job shifting and minimizing job tardiness, a hybrid scheduling decision support model (SDSM) is introduced. The model is combined by a Genetic Algorithm (GA) and an optimisation module. GA is adopted to solve the complex scheduling problem taking into consideration of the wide variety of processes while the optimisation module is suggested for tackling tardiness in doing the jobs in a cost effective way. The simulation results reveal that the model shortens the generation time of production schedules and reduces the production cost in MTO-based production projects.

Nowadays, competition among manufacturers is increasing due to the trend of globalization. Under these circumstances, the product life cycle of different products is shortened. In order to keep up with the trend and increase flexibility in manufacturing, many manufacturers have shifted from mass production to a make-to-order (MTO) production mode. MTO production is suitable for products with small customer orders or small batch production jobs. Therefore, manufacturers which produce products with expensive holding costs, such as automobiles, computer servers, which have high product variety and specific specifications, are manufactured in MTO mode. In MTO manufacturing, every product is unique so that the production routings and processing time of products differ in accordance with the specifications of each product (Ebadian, Rabbani, Jolai, Torabi, & Tavakkoli-Moghaddam, 2008). Therefore, the shop floor of MTO manufacturing is usually configured as job shop in which every job shop centre is responsible for a specific kind of operation and is responsive to changes in customers’ requirements. During the production process, manufacturers need to deal with several projects and fit them into various machines on the shop floor in order to meet the desired deadline. Under these circumstances, production planning becomes an important process in avoiding delay and ensuring that the schedule is planned on the basis of the complicated processes involved. Therefore, MTO planning is difficult in the sense that a number of different production processes have to be fitted into a limited number of machines on the job shop (Silva, Roque, and Almeida, 2006). Mould manufacturing is a classic example of an MTO industry. It has the characteristics of high holding and configuration costs such that the production planning is a complicated process. Fig. 1 shows the current situation of mould manufacturing scheduling. There are several reasons that make mould manufacturing scheduling more complex than other types of MTO production scheduling. Firstly, many processes in mould manufacturing can be processed in different sequences; shifting jobs within one product’s production sequence can enhance the machines utilization and achieve shorter production time. For example, switching the process of polishing with CNC processes at certain times can help reduce the production time of a product and minimise the time that the machines remain idle. A poor allocation of different jobs to the same machine significantly increases machine idle time. This conflicts with the trend of shortening production lead time in the industry. Secondly, moulds are generally unique, the specification of each product is different and they are processed on various machines. Therefore, calibration time for re-configuring machine specifications to fit the production of different products is needed. As the job shifting, which shifts the sequence of production process of a product, is usually takes place, time is consumed on machine calibration if the schedule is not well planned. In addition, Mould manufacturers have to cooperate with several partners and sub-contractors so as to cope with a large number of customer requirements in peak periods. Hence, time is consumed when it is necessary to re-schedule the plan to accommodate the needs of other partners frequently. Apart from complex processes and calibration time, material cost is another critical factor that must be taken into account in the process of mould manufacturing planning. A poor production plan in mould manufacturing can lead to the delay and to increase in the amount of scrap. The material cost in producing and getting rid of scrap and in reworking is very expensive in mould manufacturing production because of the uniqueness of the products and because of the expensive material cost. The materials, such as steel, copper, are different for every project and may not be able to be reused and reworked if it has problems. Therefore, the necessity for the reworking of scrap significantly increases the cost of manufacturing a mould. Currently, mould manufacturers usually use traditional planning methods together with spreadsheets to plan production schedules. These methods cannot cope with the increasingly complex problems in mould manufacturing when the number of orders received increases. The poor planning or other unexpected events increase the degree of job tardiness i.e. delay in production when comparing with planned schedule or deadline. Job tardiness delays the whole project and affects the original production plans of other production projects. This brings about a vicious circle within the manufacturing process. The delay in projects also creates the loss of loyalty and goodwill with customers. From the literatures review, it can be seen that a number of research projects have used various mathematical model and algorithms to solve problems in single or multi-jobs and machine scheduling using traditional scheduling methods. These methods are aimed at lowering manufacturing cost or shortening production time in the MTO manufacturing operation. However, few researchers have addressed the possibility of shifting jobs around within the production process of one product to reduce the production time and the time spent on calibration of the machine. In addition, it was found that the way to solve the problem in tardiness due to the insufficient capacity is also neglected.

The scheduling problems in MTO manufacturing, especially in the mould industry are difficult in the sense that the production processes of every product are different due to its unique specifications. The characteristics of MTO mode makes scheduling complex. It is difficult to generate an effective schedule which fully utilizes production resources with minimal job delay. In order to minimise the problem of job tardiness when using an MTO schedule, one of the solutions is job shifting, possibility during the production planning stage of making the mould. However, job shifting increases the complexity of production scheduling and consumes extra production planning time. In this paper, a hybrid scheduling decision support model (SDSM) is proposed to solve the MTO scheduling problems and job tardiness problems in production planning. The model consists of the scheduling module and the optimisation module. The aim of the scheduling module, which is developed by GA, is to evaluate the different production sequences in a multiple-machine environment and generate an optimum scheduling solution. However, the solution obtained is not always feasible in that the production deadline cannot be met due to there being insufficient production capacity. With regard to this, the optimisation module is adopted to tackle the tardiness problem, in the scheduling. It provides suggestions for handling jobs affected by tardiness, in a cost effective way. The two modules are operated in the form of a cycle which repeats until a completely feasible solution for MTO production is reached. Simulations have been conducted to evaluate the effectiveness of the model. From the simulation results, it is noted that the suggested model provides a more effective scheduling function for the MTO mould manufacturing when compared to the manual approach. The time in performing the scheduling tasks is reduced and the number of total number of projects affected by tardiness is decreased by using the model. Therefore, it enhances the customer relationship by completing projects on time. In order to further enhance the effectiveness of this model, some suggestions have been made for the future work. First, the model considers the coordination of production sequences with machines in the current stage. It is suggested that others resources, such as workers, and material handling equipment are also considered during the schedule planning. Furthermore, the model can be further integrated with real-time data collection technology to improve the accuracy of performing scheduling tasks.