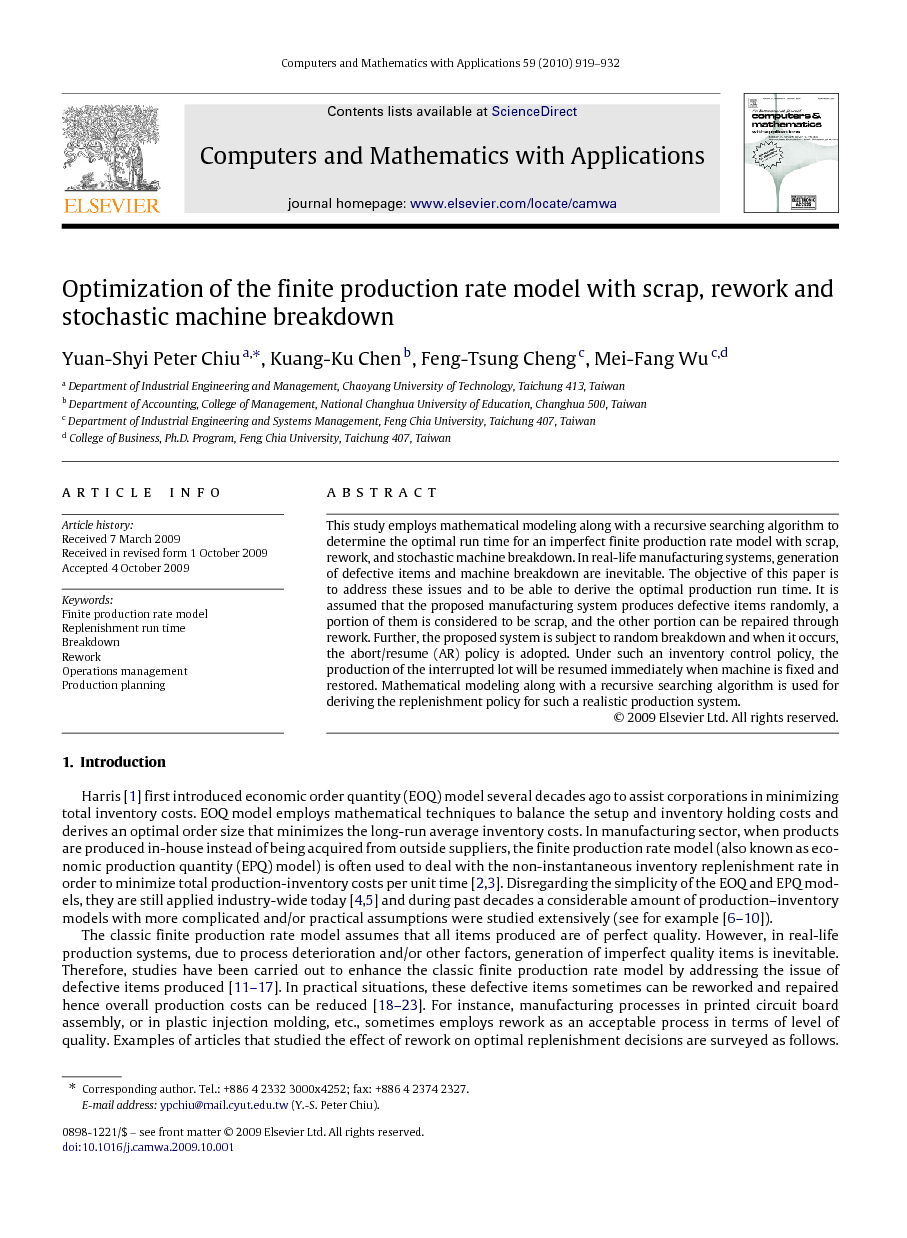 This study employs mathematical modeling along with a recursive searching algorithm to determine the optimal run time for an imperfect finite production rate model with scrap, rework, and stochastic machine breakdown. In real-life manufacturing systems, generation of defective items and machine breakdown are inevitable. The objective of this paper is to address these issues and to be able to derive the optimal production run time. It is assumed that the proposed manufacturing system produces defective items randomly, a portion of them is considered to be scrap, and the other portion can be repaired through rework. Further, the proposed system is subject to random breakdown and when it occurs, the abort/resume (AR) policy is adopted. Under such an inventory control policy, the production of the interrupted lot will be resumed immediately when machine is fixed and restored. Mathematical modeling along with a recursive searching algorithm is used for deriving the replenishment policy for such a realistic production system.

Harris [1] first introduced economic order quantity (EOQ) model several decades ago to assist corporations in minimizing total inventory costs. EOQ model employs mathematical techniques to balance the setup and inventory holding costs and derives an optimal order size that minimizes the long-run average inventory costs. In manufacturing sector, when products are produced in-house instead of being acquired from outside suppliers, the finite production rate model (also known as economic production quantity (EPQ) model) is often used to deal with the non-instantaneous inventory replenishment rate in order to minimize total production-inventory costs per unit time [2] and [3]. Disregarding the simplicity of the EOQ and EPQ models, they are still applied industry-wide today [4] and [5] and during past decades a considerable amount of production–inventory models with more complicated and/or practical assumptions were studied extensively (see for example [6], [7], [8], [9] and [10]). The classic finite production rate model assumes that all items produced are of perfect quality. However, in real-life production systems, due to process deterioration and/or other factors, generation of imperfect quality items is inevitable. Therefore, studies have been carried out to enhance the classic finite production rate model by addressing the issue of defective items produced [11], [12], [13], [14], [15], [16] and [17]. In practical situations, these defective items sometimes can be reworked and repaired hence overall production costs can be reduced [18], [19], [20], [21], [22] and [23]. For instance, manufacturing processes in printed circuit board assembly, or in plastic injection molding, etc., sometimes employs rework as an acceptable process in terms of level of quality. Examples of articles that studied the effect of rework on optimal replenishment decisions are surveyed as follows. Hayek and Salameh [19] assumed that all of the defective items produced are repairable and derived an optimal operating policy for EPQ model under the effect of rework of all defective items. Jamal et al. [22] studies the optimal manufacturing batch size with rework process at a single-stage production system. Cases of rework being completed within the same production cycle as well as rework being done after NN cycles are examined. They developed mathematical models for each case, and derived total system costs and the optimal batch sizes accordingly. In addition to the random defective rate, another critical reliability factor that can be very disruptive when happening — particularly in a highly automated production environment, is the breakdown of production equipments. Groenevelt et al. [24] first studied two production control policies that deal with stochastic machine breakdowns. The first one assumes that the production of the interrupted lot is not resumed (called no resumption or NR policy) after a breakdown. The second policy considers that the production of the interrupted lot will be immediately resumed (called abort/resume or AR policy) after the breakdown is fixed and if the current on-hand inventory is below a certain threshold level. In their article, both policies assume the repair time is negligible and they studied the effects of machine breakdowns and corrective maintenance on economic lot size decisions. Since, studies have been carried out to address the issue of production systems with breakdown (see for instance [25], [26], [27], [28], [29], [30], [31], [32], [33], [34], [35] and [36]). Examples of papers that investigated the effect of breakdowns on manufacturing systems are surveyed below. Chung [25] derived bounds for production lot sizing with machine breakdown. He obtained the upper and lower bounds of the optimal lot sizes for the aforementioned two extensions (i.e. NR and AR policies) to the EPQ model proposed by Groenevelt et al. [24]. Abboud [26] studied an EMQ model with Poisson machine failures and random machine repair time. A simple approximation model was developed to describe the behaviour of such systems, and specific formulations were derived for the cases where the repair times are exponential and constant. Moinzadeh and Aggarwal [27] analyzed a production–inventory system subject to random disruptions. The assumptions of the system include that time between breakdowns follows exponential distribution, the restoration time is constant, and excess demand is backordered. An (s, S) policy was proposed and the policy parameters that minimize the expected total cost per unit time were investigated. Furthermore, a procedure for finding optimal values for policy parameters, together with a simple heuristic procedure for finding near optimal production policies was developed. Makis and Fung [30] investigated the effects of machine failures on the optimal lot size as well as on optimal number of inspections. Formulas for the long-run expected average cost per unit time was obtained. Then, the optimal production/ inspection policy that minimizes the expected average costs was derived. Liu and Cao [32] analyzed a production–inventory model under the assumptions that demand follows a compound Poisson process and machine is subject to random breakdowns. Chung [33] presented approximations to production lot sizing with machine breakdowns. He showed that the long-run average cost function for the case of exponential failure is uni-modal, and it is neither convex nor concave. He also derived the better lower and upper bounds of the optimal lot sizes for EPQ model with random breakdowns that improve some existing results. Chiu et al. [36] studied the optimal run time problem with scrap, the reworking of repairable defective items, and machine breakdown under no resumption (NR) policy. Formulas for the long-run expected average cost per unit time was derived. Theorems for convexity and bounds of run time were presented and a simple procedure for searching the optimal run time was provided. Since the abort/resume (AR) policy is another practical and common inventory control policy to cope with machine breakdown [24] and for the reason that little attention was paid to the area of investigating the joint effects of partial rework and breakdown under AR policy on optimal replenishment run time of the finite production rate model, this paper intends to bridge the gap.

Stochastic machine breakdowns and random defective rate are two common and inevitable reliability factors that trouble the production planners and practitioners most. No wonder that determining optimal replenishment run time for such a realistic production system has received attention among the researchers in recent decades (see for example [7], [13], [24], [31] and [33]). In consideration of reducing production cost, the rework processes sometimes are employed by manufacturing firms to deal with some repairable defective items [18], [19] and [22]. The joint effects of rework and random breakdown under NR policy on the EPQ model were first studied by Chiu et al. [36]. For the reason that the abort/resume policy is another practical inventory control policy to cope with machine breakdown, this paper examines the joint effect of partial rework and random breakdown (under AR policy) on the optimal run time decision of finite production rate model. Upon accomplishment of this study, a complete numerical solution procedure (which includes the mathematical modeling and analysis, proofs of theorems, a recursive searching algorithm, and numerical demonstration) has been established to confirm that the optimal replenishment run time for such a practical finite production rate model is derivable. For future study, one interesting topic will be to examine the effect of backlogging on the optimal replenishment decisions of the same model.