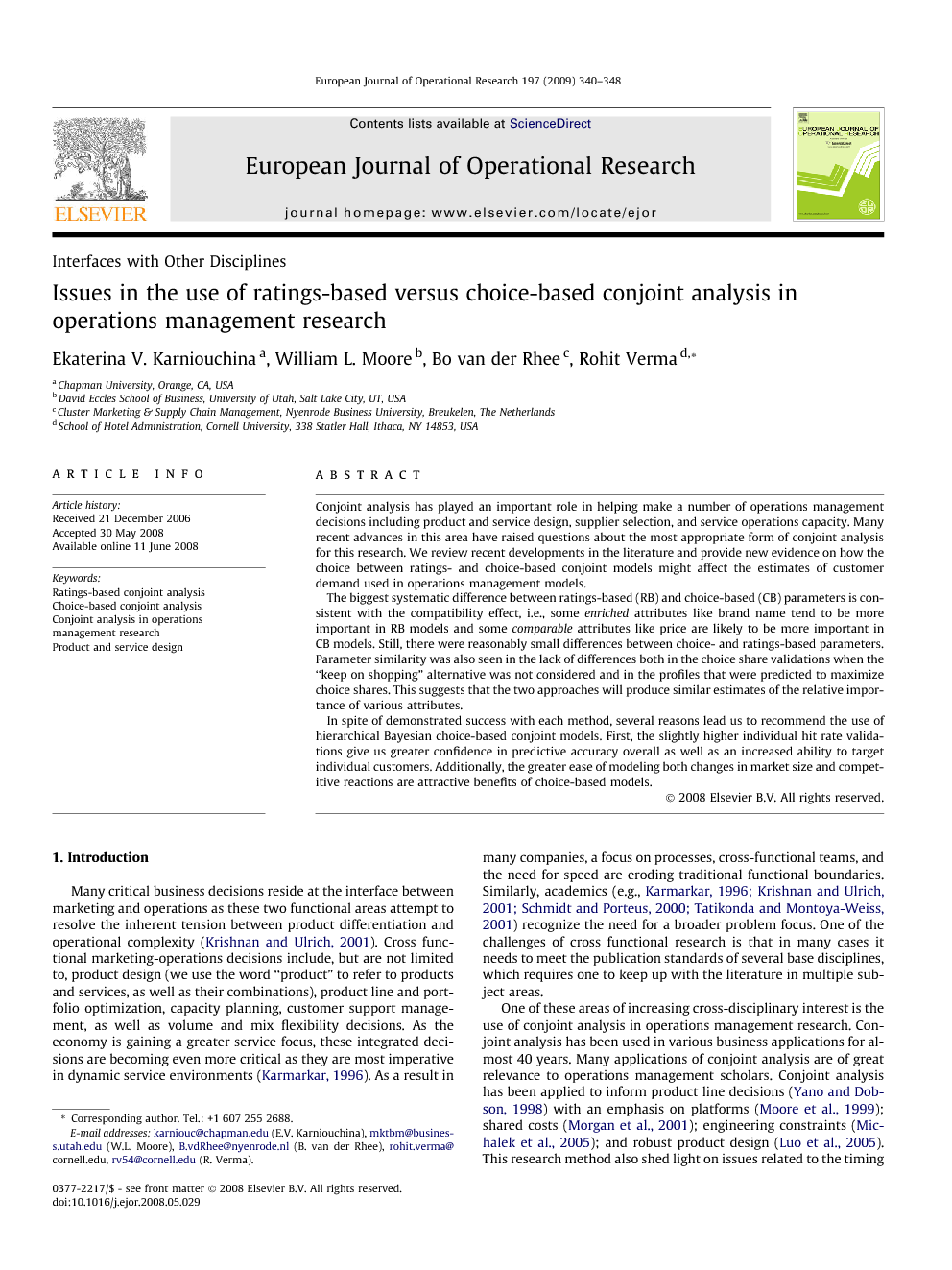 Conjoint analysis has played an important role in helping make a number of operations management decisions including product and service design, supplier selection, and service operations capacity. Many recent advances in this area have raised questions about the most appropriate form of conjoint analysis for this research. We review recent developments in the literature and provide new evidence on how the choice between ratings- and choice-based conjoint models might affect the estimates of customer demand used in operations management models. The biggest systematic difference between ratings-based (RB) and choice-based (CB) parameters is consistent with the compatibility effect, i.e., some enriched attributes like brand name tend to be more important in RB models and some comparable attributes like price are likely to be more important in CB models. Still, there were reasonably small differences between choice- and ratings-based parameters. Parameter similarity was also seen in the lack of differences both in the choice share validations when the “keep on shopping” alternative was not considered and in the profiles that were predicted to maximize choice shares. This suggests that the two approaches will produce similar estimates of the relative importance of various attributes. In spite of demonstrated success with each method, several reasons lead us to recommend the use of hierarchical Bayesian choice-based conjoint models. First, the slightly higher individual hit rate validations give us greater confidence in predictive accuracy overall as well as an increased ability to target individual customers. Additionally, the greater ease of modeling both changes in market size and competitive reactions are attractive benefits of choice-based models.

Many critical business decisions reside at the interface between marketing and operations as these two functional areas attempt to resolve the inherent tension between product differentiation and operational complexity (Krishnan and Ulrich, 2001). Cross functional marketing-operations decisions include, but are not limited to, product design (we use the word “product” to refer to products and services, as well as their combinations), product line and portfolio optimization, capacity planning, customer support management, as well as volume and mix flexibility decisions. As the economy is gaining a greater service focus, these integrated decisions are becoming even more critical as they are most imperative in dynamic service environments (Karmarkar, 1996). As a result in many companies, a focus on processes, cross-functional teams, and the need for speed are eroding traditional functional boundaries. Similarly, academics (e.g., Karmarkar, 1996, Krishnan and Ulrich, 2001, Schmidt and Porteus, 2000 and Tatikonda and Montoya-Weiss, 2001) recognize the need for a broader problem focus. One of the challenges of cross functional research is that in many cases it needs to meet the publication standards of several base disciplines, which requires one to keep up with the literature in multiple subject areas. One of these areas of increasing cross-disciplinary interest is the use of conjoint analysis in operations management research. Conjoint analysis has been used in various business applications for almost 40 years. Many applications of conjoint analysis are of great relevance to operations management scholars. Conjoint analysis has been applied to inform product line decisions (Yano and Dobson, 1998) with an emphasis on platforms (Moore et al., 1999); shared costs (Morgan et al., 2001); engineering constraints (Michalek et al., 2005); and robust product design (Luo et al., 2005). This research method also shed light on issues related to the timing of the next generation of high technology products (Kim and Srinivasan, 2006). Additionally, conjoint analysis has been used to assess tradeoffs and switching inertia associated with supplier selection (Verma and Pullman, 1998 and Li et al., 2006). Other applications have focused on optimal service design considering operational difficulty (Verma et al., 2001) and operations capacity (Pullman and Moore, 1999 and Goodale et al., 2003). Verma et al., 2006, Verma et al., 2008, Ding et al., 2007 and Victorino et al., 2005 have applied conjoint models in not-for-profit, financial, and hospitality service settings. Furthermore, an emerging emphasis on incorporating behavioral aspects into manufacturing and service operations models (Bendoly et al., 2006), portends future growth of conjoint analysis and related approaches in the operations management literature. The importance of conjoint analysis to readers the European Journal of Operational Research can be seen by a series of articles applying conjoint analysis to such topics as e-commerce ( Butler et al., 2008), banking ( Mankila, 2004), sales promotion design ( Nair and Tarasewich, 2003), urban quality of life ( Ülengin et al., 2001), forecasting ( Natter and Feurstein, 2002 and Turksen and Willson, 1995), product and product line design ( Scholl et al., 2005 and Tarasewich and McMullen, 2001), and pricing ( Day and Venkataramanan, 2006 and Green and Krieger, 1992). Therefore, our purpose is to review recent developments and provide new evidence on how the choice of different variants of conjoint analysis might affect study results. In particular, we examine differences between ratings- and choice-based conjoint analyses. Our intended audience includes operations management researchers who want to use conjoint analysis in their papers to measure customer utility or demand as part of their models as well as marketers interested in performing conjoint analysis. For many years, ratings-based (RB) conjoint analysis (where respondents rate their preference for different product profiles and individual-level attribute partworths are estimated with OLS regression) was more popular than choice-based (CB) conjoint analysis (where respondents make choices from a series of sets of product profiles and more aggregate-level parameters are estimated with logit or probit models). In the mid 1990’s hierarchical Bayesian (HB) methods were introduced to both RB and CB conjoint analyses, which allowed more accurate estimates of individual-level parameters with fewer observations (e.g., Allenby and Lenk, 1994 and Lenk et al., 1996). While HB methods benefited both RB and CB approaches, the impact on CB methods was greater as one was now able to estimate individual-level preferences, where only segment- and aggregate-level estimates had been available in the past. This new capability has shifted the preference of some academics and consultants to CB methods. The existence of two methods, both of which are able to capture individual-level preferences has led to questions about systematic differences in results that one would get when using these different approaches and which method should be used when attempting to design new and improved products and services. Researchers have long recognized several fundamental differences between RB and CB methodologies. For instance, greater task similarity between choices and market behavior may lead to greater external validity (Elrod et al., 1992). Still, RB methods may be just as successful due to their ability to mirror marketplace simplification (Huber, 1987). An individual choice task provides less information than a ratings task but it may be easier for respondents. While CB conjoint models produce choice probabilities directly, RB models use ad hoc rules, like maximum utility or share of preference, to convert preference ratings into choice probabilities. Even though these rules have long proven successful in the marketing literature (e.g., Green et al., 1981) they can be seen as arbitrary. Operationally, RB studies are easier to design and estimate. Finally, the fact that preferences are not invariant across elicitation processes or contexts (e.g., Payne et al., 1992) may lead to systematic differences in the parameters estimated with RB and CB conjoint analyses. The remainder of this paper is organized as follows: first we present the background related to differences between ratings- and choice-based models and outline some theoretical reasons why the parameter estimates obtained from these two classes of models may differ systematically. Next we provide an empirical test where several models are estimated based on choice- vs. judgment-based tasks and examine the differences in resulting coefficients and corresponding model fits. Finally, we summarize the implications of our research as well as provide managerial guidance regarding the choice between different estimation techniques (OLS, Hierarchical Bayes, and latent segment) as well as choice elicitation methods (choice-based versus ratings-based tasks).

Table 2A compares the relative importance of the attributes in the study. An attribute’s importance is defined as the difference in an individual’s utility for the most and least preferred levels. These attribute importances are normalized within person.