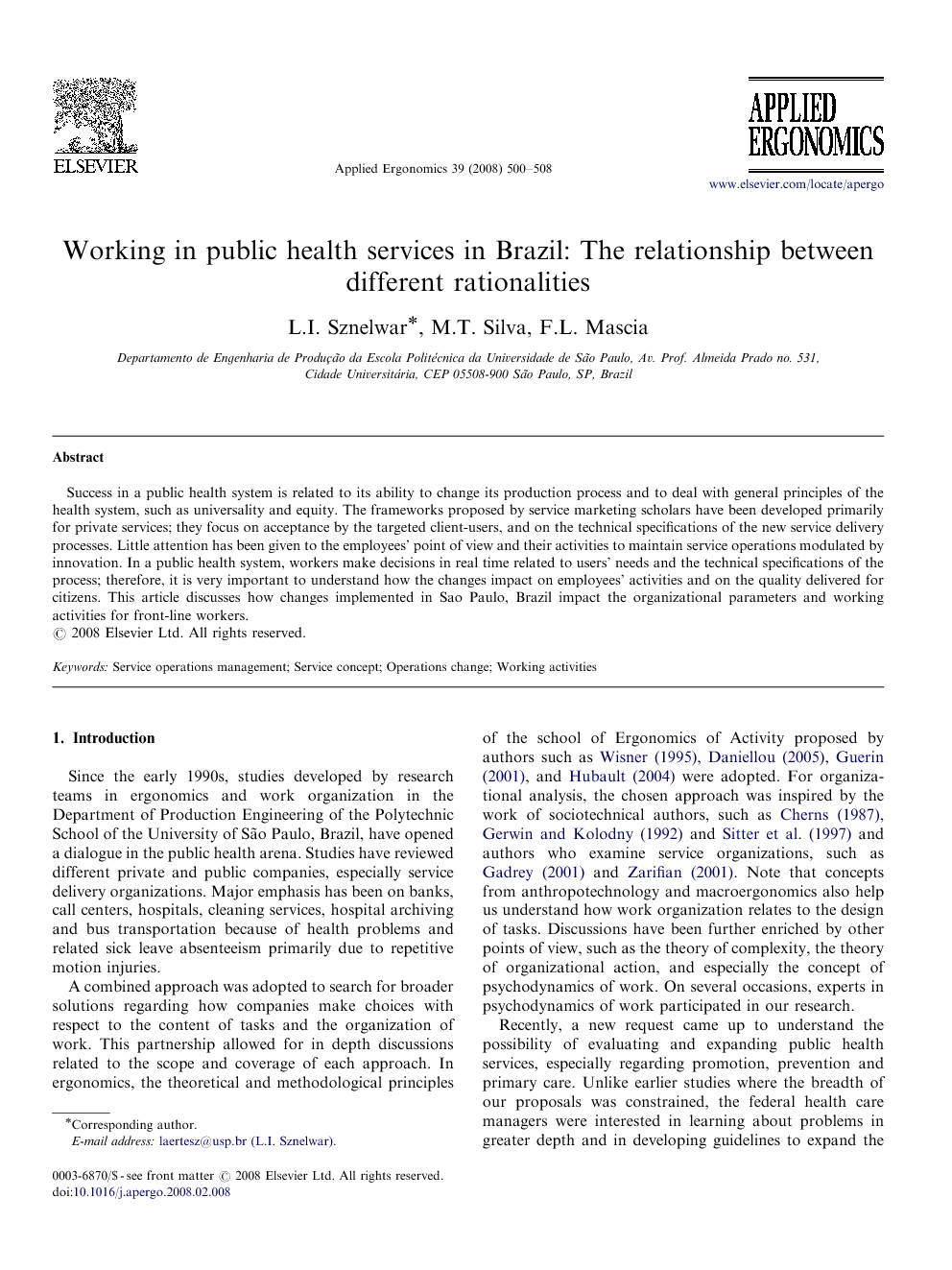 Success in a public health system is related to its ability to change its production process and to deal with general principles of the health system, such as universality and equity. The frameworks proposed by service marketing scholars have been developed primarily for private services; they focus on acceptance by the targeted client-users, and on the technical specifications of the new service delivery processes. Little attention has been given to the employees’ point of view and their activities to maintain service operations modulated by innovation. In a public health system, workers make decisions in real time related to users’ needs and the technical specifications of the process; therefore, it is very important to understand how the changes impact on employees’ activities and on the quality delivered for citizens. This article discusses how changes implemented in Sao Paulo, Brazil impact the organizational parameters and working activities for front-line workers.

Since the early 1990s, studies developed by research teams in ergonomics and work organization in the Department of Production Engineering of the Polytechnic School of the University of São Paulo, Brazil, have opened a dialogue in the public health arena. Studies have reviewed different private and public companies, especially service delivery organizations. Major emphasis has been on banks, call centers, hospitals, cleaning services, hospital archiving and bus transportation because of health problems and related sick leave absenteeism primarily due to repetitive motion injuries. A combined approach was adopted to search for broader solutions regarding how companies make choices with respect to the content of tasks and the organization of work. This partnership allowed for in depth discussions related to the scope and coverage of each approach. In ergonomics, the theoretical and methodological principles of the school of Ergonomics of Activity proposed by authors such as Wisner (1995), Daniellou (2005), Guerin (2001), and Hubault (2004) were adopted. For organizational analysis, the chosen approach was inspired by the work of sociotechnical authors, such as Cherns (1987), Gerwin and Kolodny (1992) and Sitter et al. (1997) and authors who examine service organizations, such as Gadrey (2001) and Zarifian (2001). Note that concepts from anthropotechnology and macroergonomics also help us understand how work organization relates to the design of tasks. Discussions have been further enriched by other points of view, such as the theory of complexity, the theory of organizational action, and especially the concept of psychodynamics of work. On several occasions, experts in psychodynamics of work participated in our research. Recently, a new request came up to understand the possibility of evaluating and expanding public health services, especially regarding promotion, prevention and primary care. Unlike earlier studies where the breadth of our proposals was constrained, the federal health care managers were interested in learning about problems in greater depth and in developing guidelines to expand the “Programa Saúde da Família” (Family Health Program–FHP). Introducing the concepts of ergonomics and an organizational approach was new for this sector: prior studies were more concerned with assessing health indicators for the overall population in order to get an epidemiological evaluation of health workers and with developing standards of comparison between care units. There were no studies of the work, either its content or difficulties, or the way production activities are organized in public health services.

This paper presents a discussion based on different approaches: (1) the ergonomic approach, centered on human activity and (2) an organizational approach focused on the issue of the organization of services. In both cases we tried to identify and assess problems and to propose transformations that take the goals of the production system into account. We tried to include the viewpoints of professionals developing actions that result in quality services. The dialogue between the two approaches permits the merging of the objectives devoted to the rationalization of operations, including the value of the service to the organization and to the user, and the objectives devoted to the rationale of the workers, i.e. understanding the work activity as a fundamental assumption to the success of the operations. Our analysis of the production projects emphasizes the work activity that promotes the health and the professional development of the diverse workers involved in production, regardless of their profession of origin or their position within the hierarchy. The organizational approach used in the study is based on a systemic point of view and attempts to examine the context in which work takes place, starting from the assumption that different rationales of authors outside the production system are important as producers of operational technical rationale present in the system observed. For this, it was important to analyze the different scenarios where production takes place in connection with factors internal and external to the organization, such as organizational structures, legislation, the rules and the people who are active in the system, in a process of mutual determination. These different factors would have more or less influence on the dynamics of production, making people's work activities appear differently in the case studies, varying in accordance with their objective, interests, opportunities and limitations. This should be true specially when production is not delimited in a rigorous manner and there is a high degree of uncertainty, such as in the case of health. This reinforces the need to create organizations that are sufficiently flexible to stand up to a wide variety of events that might occur. Flexibility demands resources, especially a network of cooperation that allows the people involved to manage what is happening and to provide the population with the services it needs, without however, running any risks to health. Incorporating different points of view in the research, even when they conflict, allows for a better understanding of the reality and to propose viable solutions that might meet the desires of the population, the system managers and the workers involved. Bringing the problems experienced by different social actors into the public light is a first step in understanding what goes on with the work and production environments. The results of this study show the importance to develop this kind of dialogue, which is important since the production model is developed for the whole country, centralized in the Federal Government, and very far away from the context where services are actually provided. Therefore, getting information that bridge the operational reality and the actual work and the objectives of the managers and idealized in the system becomes a significant contribution. In this case, the results reflect the viewpoint of the managers and analyses of the activities of the workers. To enrich this research, it would be interesting to develop a study that incorporates the user's viewpoint, especially to help to evaluate the value of the service and to propose a better alignment of the proposed service with the specific desires and needs of the population, not with respect to general epidemiological data. Such a study would permit to realize the participation of users in the different activities of the process as co-authors of the production analyzed. Even though not explicitly mentioned in the paper, the psychodynamics of work approach was a third approach used in the study: it proved to be very useful to help understand what happens in a production system. Psychodynamics deals with the psycho-affective aspects of work and, therefore, makes it possible to bring a significant part of the work into the public space. In this way, it helps the subjects involved in production to better understand the situation in which they live, therefore permitting appropriation actions and supporting transformative actions. We believe that this study raises interesting issues with respect to the macroergonomic approach. The assumptions that guided this study are in concordance with this approach: the focus is not an ergonomic approach centered on work positions, but rather the consideration of the environment and the different social and cultural aspects that influence the production systems and people's activities. Dealing with all contextual aspects was not possible in this study, but it is obvious that a production system cannot be isolated from its context, especially when the users themselves are co-authors in the production of services. This confirms that approaching a socio-technical system from a single viewpoint impoverishes the analysis and, therefore, results in limited solutions: trying to correct one problem eventually causes other, more pernicious problems.