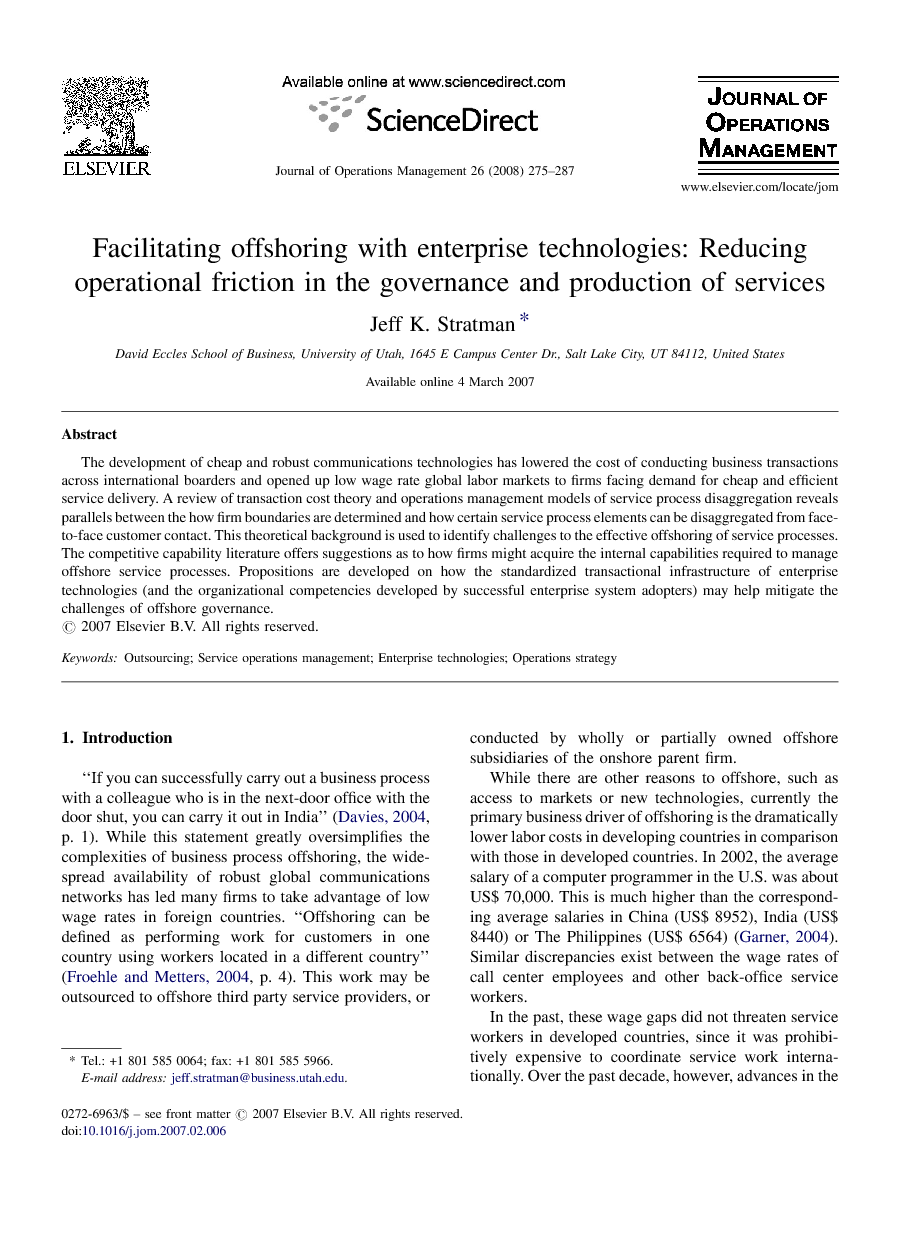 The development of cheap and robust communications technologies has lowered the cost of conducting business transactions across international boarders and opened up low wage rate global labor markets to firms facing demand for cheap and efficient service delivery. A review of transaction cost theory and operations management models of service process disaggregation reveals parallels between the how firm boundaries are determined and how certain service process elements can be disaggregated from face-to-face customer contact. This theoretical background is used to identify challenges to the effective offshoring of service processes. The competitive capability literature offers suggestions as to how firms might acquire the internal capabilities required to manage offshore service processes. Propositions are developed on how the standardized transactional infrastructure of enterprise technologies (and the organizational competencies developed by successful enterprise system adopters) may help mitigate the challenges of offshore governance.

“If you can successfully carry out a business process with a colleague who is in the next-door office with the door shut, you can carry it out in India” (Davies, 2004, p. 1). While this statement greatly oversimplifies the complexities of business process offshoring, the widespread availability of robust global communications networks has led many firms to take advantage of low wage rates in foreign countries. “Offshoring can be defined as performing work for customers in one country using workers located in a different country” (Froehle and Metters, 2004, p. 4). This work may be outsourced to offshore third party service providers, or conducted by wholly or partially owned offshore subsidiaries of the onshore parent firm. While there are other reasons to offshore, such as access to markets or new technologies, currently the primary business driver of offshoring is the dramatically lower labor costs in developing countries in comparison with those in developed countries. In 2002, the average salary of a computer programmer in the U.S. was about US$ 70,000. This is much higher than the corresponding average salaries in China (US$ 8952), India (US$ 8440) or The Philippines (US$ 6564) (Garner, 2004). Similar discrepancies exist between the wage rates of call center employees and other back-office service workers. In the past, these wage gaps did not threaten service workers in developed countries, since it was prohibitively expensive to coordinate service work internationally. Over the past decade, however, advances in the electronic delivery of services, and global communications, have removed many of the technological barriers to delivering services globally. The resulting reduction in the employment of local service workers in developed countries has sparked an outcry from politicians and media pundits (see, for example, http://www.cnn.com/CNN/Programs/lou.dobbs.tonight/popups/exporting.america/content.html). However, Garner (2004) estimates that the loss of U.S. service jobs between 2000 and 2002 was roughly 109,000 jobs annually, or less than 0.1% of total employment. While the recent offshoring of service jobs may be small in absolute terms, Forrester Research has increased their estimate of the number of U.S. service jobs that will be moved to low-wage countries from 588,000 to 830,000 by the end of 2005 (McDougall, 2004). McCarthy (2004) estimates that the number of jobs offshored has increased to about 200,000–300,000 annually. The offshoring of services is clearly trending upward, and this business practice is likely to be an important part of service operations management for the foreseeable future. Despite offshore labor costs as much as 90% lower than U.S. averages (Garner, 2004), some companies have found that the overall costs of the offshored processes have exceeded prior in-house costs (Ferguson, 2004 and Golder, 2004). Language, cultural and time zone differences are obvious problems that complicate offshore process management, but more subtle challenges also exist. If the offshored business processes cannot be precisely defined and communicated, several time-consuming process change iterations may be needed to achieve the requisite service quality level. This can be a problem for firms operating in dynamic service environments (Ferguson, 2004). Another common issue faced by firms inexperienced with offshoring is that excessive time is spent selecting vendors according to rigid technical criteria, while managerial and organizational competencies critical to the offshoring relationship are not evaluated (Davies, 2004 and Golder, 2004). The purpose of this paper is to apply an operations strategy lens to the problem of effective offshore business process management. The theoretical bases of offshore business process selection are examined from the perspective of transaction cost theory (Coase, 1937 and Williamson, 1981), and dynamic capability theory (Barney, 1991, Kogut and Zander, 1993, Lengnick-Hall and Wolff, 1999 and Wernerfelt, 1984). The service operations management literature is reviewed to highlight characteristics of service business processes that may facilitate or exacerbate the challenges of offshore management. These characteristics are classified and examined to suggest operational remedies that may allow for better management of offshore relationships. Since many decisions regarding offshoring have a rational basis in transaction cost economics, it seems reasonable to posit that managerial practices that reduce transaction costs will have a significant impact on the success of offshoring relationships. Enterprise systems, and enterprise resource planning (ERP) systems in particular, have become the de facto standard for automated transaction processing in large companies (MetaGroup, 2004 and Scott and Shepherd, 2002). The technical strengths of enterprise systems, together with the organizational competencies associated with successful ERP adoption, are evaluated against the needs of effective offshoring management, and propositions are developed around the facilitating role enterprise systems may play in an offshoring environment. The next section uses service process disaggregation models from the operations management literature, together with transaction cost theory to outline the rationale and challenges of service process offshoring. Section 3 reviews competitive capability theory in the context of service process offshoring to identify firm competencies that address the challenges of offshore governance. Practical examples of offshored service processes are also discussed within the framework of these theories. Section 4 matches the challenges of offshoring against the strengths of enterprise systems and develops propositions on the impact of these systems on the management of offshore business processes. Section 5 concludes with a summary of the arguments made in the paper and offers some suggestion for future research in the area of service sector offshoring.