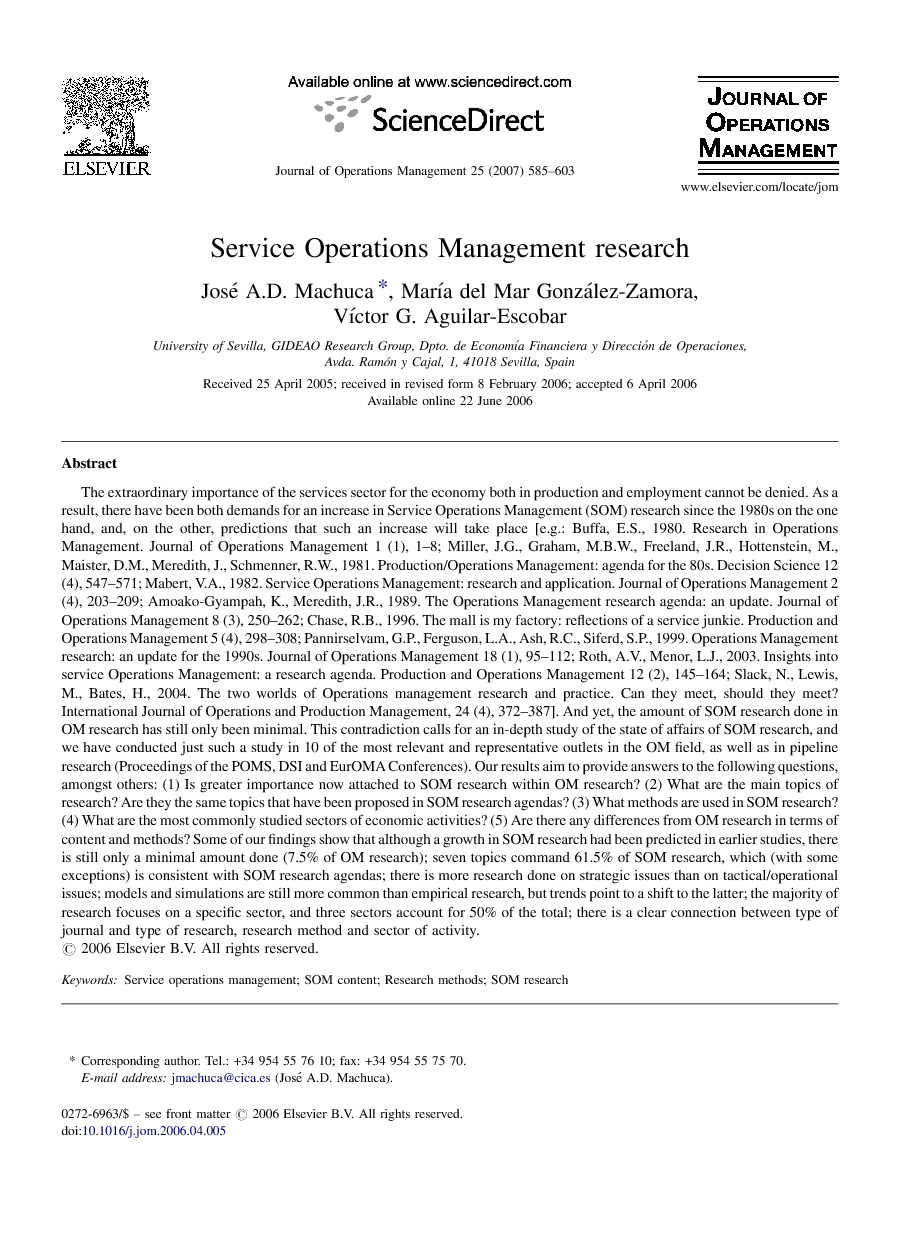 Some of the most fundamental features that have characterized developed economies in recent decades are connected with the services sector, confirming the great importance the sector has: (a) The extraordinary role played by the services sector in production. OECD statistical data for 2003 ( OECD, 2005a) attributes approximately 70% of the GDP to services in a large number of developed countries (e.g. USA 76.5%; France 75.9%; UK 73.8%; Italy 70.9%; Germany 70.1%; Japan 69.6%, and Spain 67.2%). (b) The important role the services sector plays in employment. Per-sector civilian employment data for 2004 ( OECD, 2005b) puts this at over 60% in many advanced economies (e.g. USA 78.4%; UK 76.4%; France 72.6%; Japan 67.1%; Germany 66.6%; Italy 64.5%, and Spain 64%). And, moreover, this is a growing trend (e.g. in the USA the figure increased from 66.4% to 78.4% between 1981 and 2004, whereas during the same period manufacturing fell from 30.1% to 20%, and agriculture from 3.5% to 1.6% ( OECD, 2005a)). (c) Service activities are being incorporated more and more into manufacturing companies. It has been calculated that between 30% and 70% of added value in a typical manufacturing company can be attributed to the services constituent ( Rosen, 1998). The relevance of the services sector in developed countries should be reflected in the importance given to instruction and research in the various areas of service company management and administration. But, is this really the case? There has been an awareness of this importance in the specific case of Operations Management (OM) for over 20 years. In their OM research agenda published in Decision Sciences, Miller et al. (1981) cited Service Operations Management (SOM) as one of their four special interest groups. Eight years later, Amoako-Gyampah and Meredith (1989) published an updated Operations Management research agenda in JOM based on Miller et al. (1981) amongst others. Once again SOM is named as one of the important subjects to be taken into consideration. Although the percentage of SOM research was very small, it was forecast that it would play an increasingly important role. Nevertheless, a further update on the state of research in Operations Management published in JOM by Pannirselvam et al. (1999) stated that expectations for growth in published research in SOM had not been met. Observations made in recent papers by other authors (e.g. Roth and Menor, 2003, Slack et al., 2004 and Johnston, 2005) suggest that, in their opinion, there is still not enough research being done in SOM. There is an evident contradiction between the importance of services in the real world and the little attention paid to it in Operations Management research (despite the fact that it is continually found on research agendas) and this, in our view, demanded an in-depth study on the state of current SOM research to be done which would cover both numbers of SOM publications and other important issues. And yet, to date none had been conducted. This was not the case for other significant OM sub-areas, such as International Operations Management (published in JOM by Prasad and Babbar (2000)) or Supply Chain Management (Alfaro Tanco et al., 2002). Our study was conducted with the intention of addressing what we considered to be an urgent need. Its prime objective was to determine the state of affairs of SOM research in the most relevant outlets in the field of Operations Management. The study was designed to answer four basic questions: (a) What variations, if any, might have taken place in underlying trends for the number of SOM publications in OM research since the publication of the most recent studies into the latter? (b) What are the main topics of research? (c) What methods are used in SOM research? (d) Which sectors of activity (if any) are the most commonly studied? Knowing the answers to these questions is important for any subject field, but it is crucial for those, such as SOM, which are still emerging. It is especially important when the due attention a subject's importance in the real world demands does not seem to be paid to it. The answers to these questions do not only allow the state of affairs of SOM research to be established through quantitative data for the first time, but they are also useful in other ways: (a) they show whether SOM has begun to occupy a position in OM research that is more in keeping with its importance in the real world; (b) they allow a comparison to be made with OM research in manufacturing to see whether the two sets of results really are different, as stated by one sector of OM scholars; (c) they allow SOM research content to be compared with the needs that are expressed in SOM research agendas; (d) they will also show researchers the most researched topics and sectors and these which seem to need more attention, as well as the most used research methods in SOM. The following section offers a brief review of literature, the methodology used is then set out and, finally, the results obtained are commented upon. The study ends with a section devoted to main conclusions and final considerations. Our study into SOM reseach focuses on the period from 1997 to 2002 and begins at the end of the period analyzed by Pannirselvam et al. (1999) with a view to determining whether any changes have taken place since then.