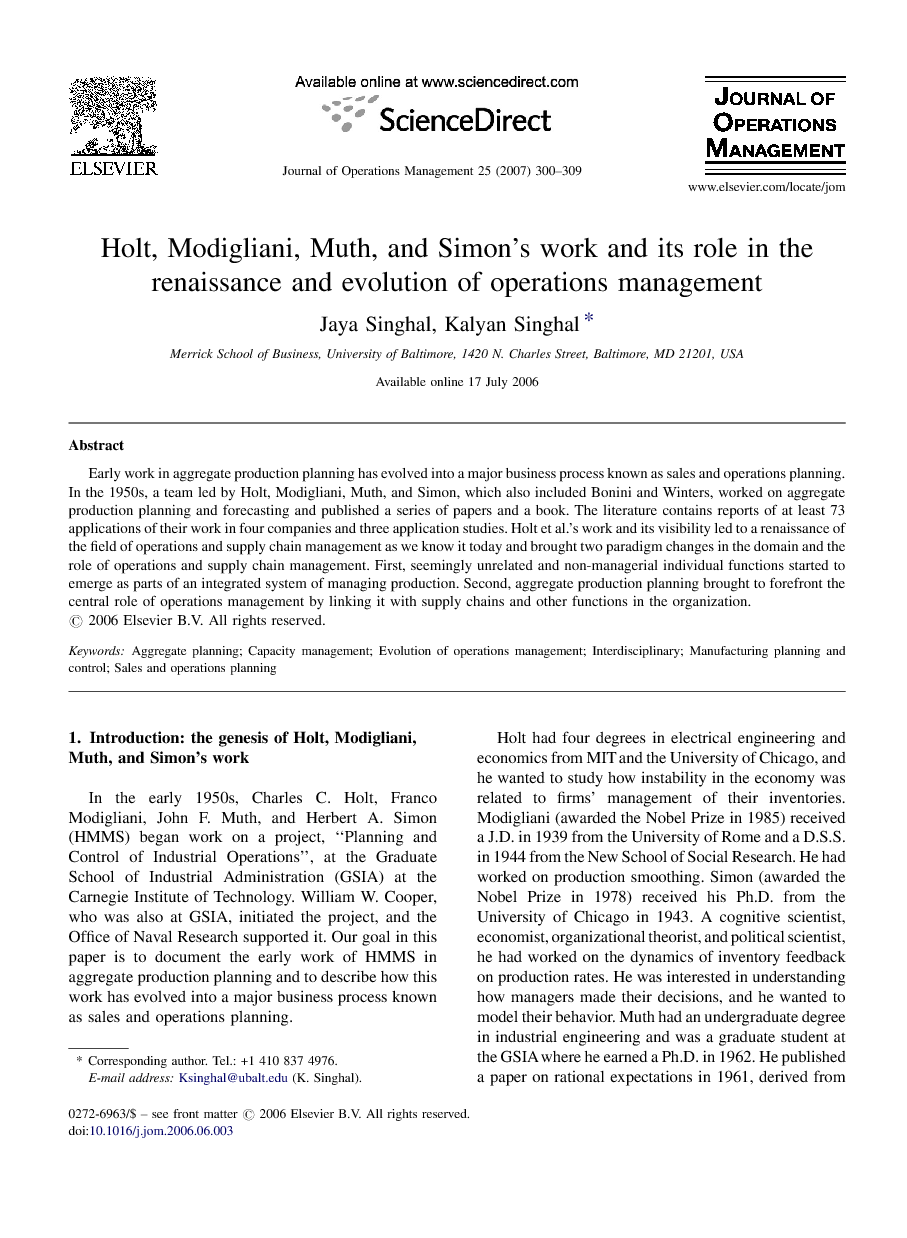 Early work in aggregate production planning has evolved into a major business process known as sales and operations planning. In the 1950s, a team led by Holt, Modigliani, Muth, and Simon, which also included Bonini and Winters, worked on aggregate production planning and forecasting and published a series of papers and a book. The literature contains reports of at least 73 applications of their work in four companies and three application studies. Holt et al.'s work and its visibility led to a renaissance of the field of operations and supply chain management as we know it today and brought two paradigm changes in the domain and the role of operations and supply chain management. First, seemingly unrelated and non-managerial individual functions started to emerge as parts of an integrated system of managing production. Second, aggregate production planning brought to forefront the central role of operations management by linking it with supply chains and other functions in the organization.

In the early 1950s, Charles C. Holt, Franco Modigliani, John F. Muth, and Herbert A. Simon (HMMS) began work on a project, “Planning and Control of Industrial Operations”, at the Graduate School of Industrial Administration (GSIA) at the Carnegie Institute of Technology. William W. Cooper, who was also at GSIA, initiated the project, and the Office of Naval Research supported it. Our goal in this paper is to document the early work of HMMS in aggregate production planning and to describe how this work has evolved into a major business process known as sales and operations planning. Holt had four degrees in electrical engineering and economics from MIT and the University of Chicago, and he wanted to study how instability in the economy was related to firms’ management of their inventories. Modigliani (awarded the Nobel Prize in 1985) received a J.D. in 1939 from the University of Rome and a D.S.S. in 1944 from the New School of Social Research. He had worked on production smoothing. Simon (awarded the Nobel Prize in 1978) received his Ph.D. from the University of Chicago in 1943. A cognitive scientist, economist, organizational theorist, and political scientist, he had worked on the dynamics of inventory feedback on production rates. He was interested in understanding how managers made their decisions, and he wanted to model their behavior. Muth had an undergraduate degree in industrial engineering and was a graduate student at the GSIA where he earned a Ph.D. in 1962. He published a paper on rational expectations in 1961, derived from the work on the project, “Planning and Control of Industrial Operations”. Robert Lucas built on Muth's work and won a Nobel Prize in 1995. According to Simon (1978a), the goal of the GSIA, which was newly established in 1949, was “to place business education on a foundation of fundamental studies in economics and behavioral science”. Simon noted that the work on the HMMS project was a part of this effort, and that fortunately the computer and the new management science techniques had just started appearing.

The problem Holt, Modigliani, Muth, and Simon addressed is now viewed in practice as sales and operations planning. It plays a pivotal role in integrating the operations, marketing, and finance functions. During the last 50 years, the integration of these functions has been greatly facilitated by the availability of optimization software and enterprise resource planning systems and the advent of the Internet. It has made a profound impact on the evolution of operations and supply chain management and yield (revenue) management. The scope of integration now also includes such issues as detailed scheduling (Dawande et al., 2006), delivery guarantees (Rao et al., 2005 and Boyaci and Ray, 2006), interorganizational coordination (Buhman et al., 2005, Ferguson and Ketzenberg, 2006 and Majumdar and Ashok Srinivasan, 2006), manufacturing flexibility strategies (Ketokivi, 2006), and the role of pricing. The evolving role of integration on a range of topics has been widely covered in the literature. Five review papers (Boyer et al., 2005, Kleindorfer et al., 2005, Kouvelis et al., 2005, Krishnan and Loch, 2005 and Schroeder et al., 2005) describe a number of papers that address various dimensions of integration. Lee and Ng (1997) pointed out that the interdisciplinary perspective, combined with the benefits of interorganizational coordination, has been primarily responsible for the new paradigm in supply chain management and for the “tremendous excitement and top management attention” on this subject. They noted, “It seems that the distinction between the so-called supply chain management today and traditional operations management lies in two dimensions of integration and coordination: organizational integration and flow coordination. …Companies are also overcoming the functional boundaries, so that the different disciplines and functions, such as manufacturing, distribution, marketing, accounting, information, and engineering, are better integrated”. In the rapidly growing area of yield and revenue management, the models for matching short-term supply and demand have become a fundamental component of the daily operations of manufacturing and service companies because managers can effectively manipulate price to encourage or discourage demand in the short run (Bitran and Caldentey, 2003). Geoffrion (2002) pointed out that the digital economy was facilitating dynamic pricing (better and faster changes in posted prices in response to market conditions, costs, demand, inventory, and competitors’ behavior and better price discrimination through better real-time segmentation) and added, “This seems to be a point of convergence of Marketing and Operations Management as management disciplines. Pricing is becoming less like a class of decisions made episodically by marketing specialists and more like an operational process in which pricing decisions are dynamically integrated with the traditional steps of the online sales process and also with operating data and decisions that have been traditional OM concerns”. The applications of models in industry have also been driving academic research (Gallego and Van Ryzin, 1997 and Baker and Collier, 2003). The integrated approach to planning is becoming more and more a standard practice in companies. It is also facilitating and is being facilitated by globalization and the emergence of distributed supply chains. Holt, Modigliani, Muth, and Simon were clearly way ahead of their time in understanding the importance of this integrated approach to planning.