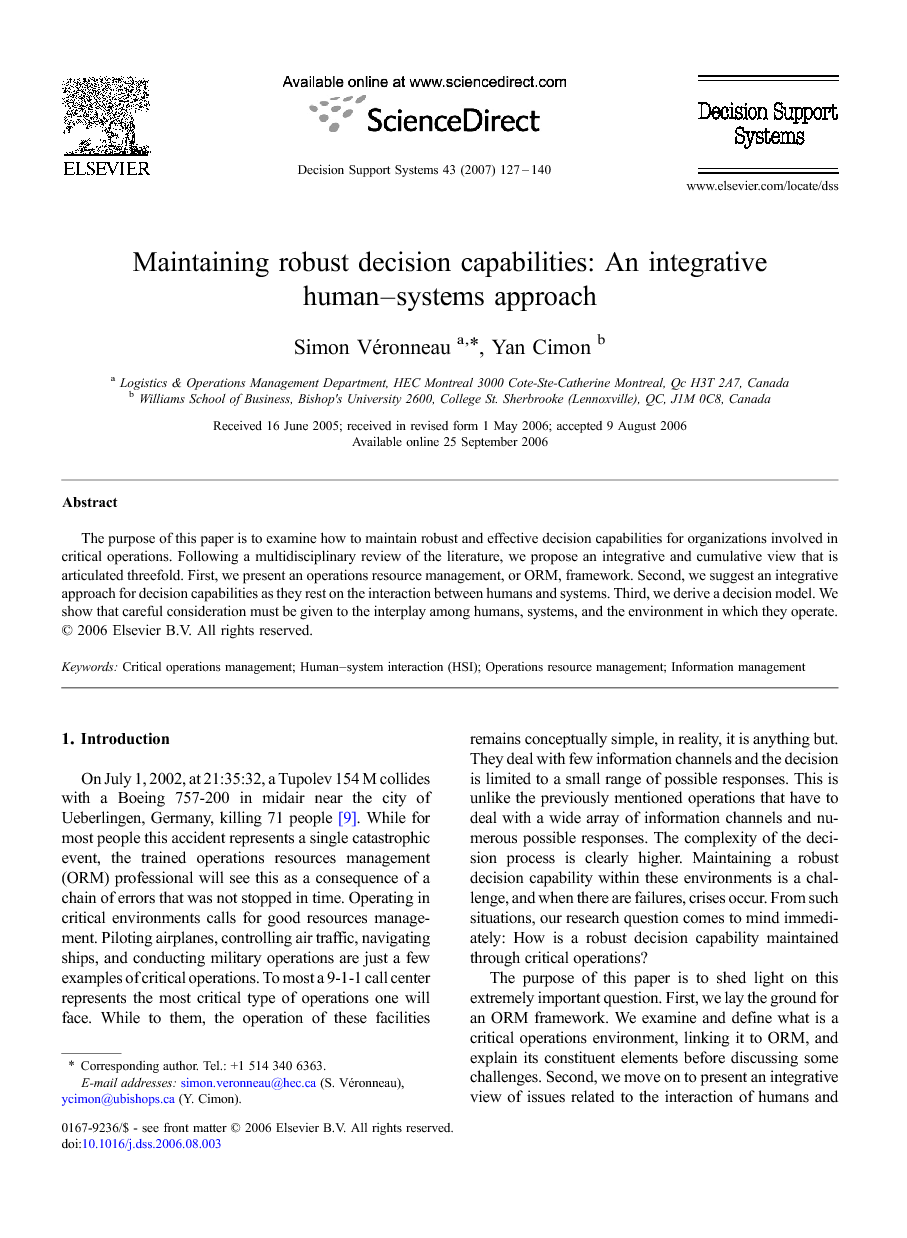 The purpose of this paper is to examine how to maintain robust and effective decision capabilities for organizations involved in critical operations. Following a multidisciplinary review of the literature, we propose an integrative and cumulative view that is articulated threefold. First, we present an operations resource management, or ORM, framework. Second, we suggest an integrative approach for decision capabilities as they rest on the interaction between humans and systems. Third, we derive a decision model. We show that careful consideration must be given to the interplay among humans, systems, and the environment in which they operate.

On July 1, 2002, at 21:35:32, a Tupolev 154 M collides with a Boeing 757-200 in midair near the city of Ueberlingen, Germany, killing 71 people [9]. While for most people this accident represents a single catastrophic event, the trained operations resources management (ORM) professional will see this as a consequence of a chain of errors that was not stopped in time. Operating in critical environments calls for good resources management. Piloting airplanes, controlling air traffic, navigating ships, and conducting military operations are just a few examples of critical operations. To most a 9-1-1 call center represents the most critical type of operations one will face. While to them, the operation of these facilities remains conceptually simple, in reality, it is anything but. They deal with few information channels and the decision is limited to a small range of possible responses. This is unlike the previously mentioned operations that have to deal with a wide array of information channels and numerous possible responses. The complexity of the decision process is clearly higher. Maintaining a robust decision capability within these environments is a challenge, and when there are failures, crises occur. From such situations, our research question comes to mind immediately: How is a robust decision capability maintained through critical operations? The purpose of this paper is to shed light on this extremely important question. First, we lay the ground for an ORM framework. We examine and define what is a critical operations environment, linking it to ORM, and explain its constituent elements before discussing some challenges. Second, we move on to present an integrative view of issues related to the interaction of humans and systems in such an environment. This view is built on the interrelationship of the psychology of decision-making, issues related to decision support systems (DSS), human–system interaction (HSI), and queuing. Third, we put forward a decision model. We consider the impact of task loading on decision capabilities and suggest a decision matrix based on the criticality of events and the slack time remaining before a crisis (STRC). We conclude by pointing out to some implications for academics and practitioners.

We started by asking ourselves how to maintain robust decision capabilities within critical operations. The answer is threefold. First, an ORM framework is essential as it provides for a more general and applicable venue than the more specialized CRM or BRM approaches from which it takes its roots. Second, having an ORM framework at hand, it then becomes of paramount importance to understand the intricacies of decision capabilities as they stem from the interaction of humans and systems. Following an exhaustive review of the literature, we frame an integrative view where four interrelated concepts emerge: the psychology of decision-making; issues related to DSS; HSI; and queuing. Furthermore, each of these concepts contains a set of constructs making for a more complete, but also more complex, picture of how humans and systems combine for decision-making within the aforementioned ORM framework. Third, as we built on the two previous elements, the ORM framework and an integrative view of human and systems, we posit that task loading as it relates to decision capabilities needs to be managed, keeping the interplay of systems and information in mind, in order for them not to cross critical thresholds. To prevent such a situation, we present a simple decision matrix that prioritises the decisions to be taken based on the criticality of the event requiring such decisions and on the STRC. The result of this matrix is that while priority one and priority three situations are easy to separate, priority two situations require a judgment call from decision-makers. Going back to the Ueberlingen accident we can conclude that if an ORM framework had been in place at the air traffic control center, certain key contributing elements of the chain of errors would have been averted. When the DSS system would have noticed the task load increase it could have relayed the information instantaneously to the other air traffic controller–in the adjacent room–to come to “double the watch”. This would have freed the current operator from spending important time on trying to contact his colleague and would have allowed for the splitting of the task load once his colleague would have arrived. Furthermore, even though the center was ergonomically designed, with just a few feet separating the two stations [see 9], this separation proved to be too much for one operator to maintain his situational awareness. Clearly, this task overload made the operator's Boyd cycle longer than the cycle required for successful decisions to be rendered. Having the two workstations truly integrated would have allowed for the sole air traffic controller to have a better HSI, a shorter Boyd cycle, and to maintain awareness of the situation developing at the other station, which had two fast approaching planes on a collision course. Two key elements in the Ueberlingen accident are directly addressed within this paper: One is the fact that the task load increase was too much for one operator to handle, leading to valuable minutes being wasted trying to reach another operator to come and help. Secondly, the critical information was not integrated and available on two distinct systems. No one can assert boldly and with certainty that removing these two key elements in the chain of errors would have prevented the collision of the two aircraft in itself. We can, however, assert that these two elements were significant contributing factors to the accident [see 9], and that these key shortcomings would have been corrected by a system like the one we propose in this paper. Having an intelligent system recognising the need for more resources and automatically requesting them would have prevented the queuing from occurring, and for hasty decisions to be taken due to a paucity of resources. This integrative framework could have possibly saved the lives of these 71 persons, and it could offer great possibility for other critical operations environments in the future. We believe that applying this ORM framework to critical operations environments would certainly reduce the likelihood of loss of life and/or crises.