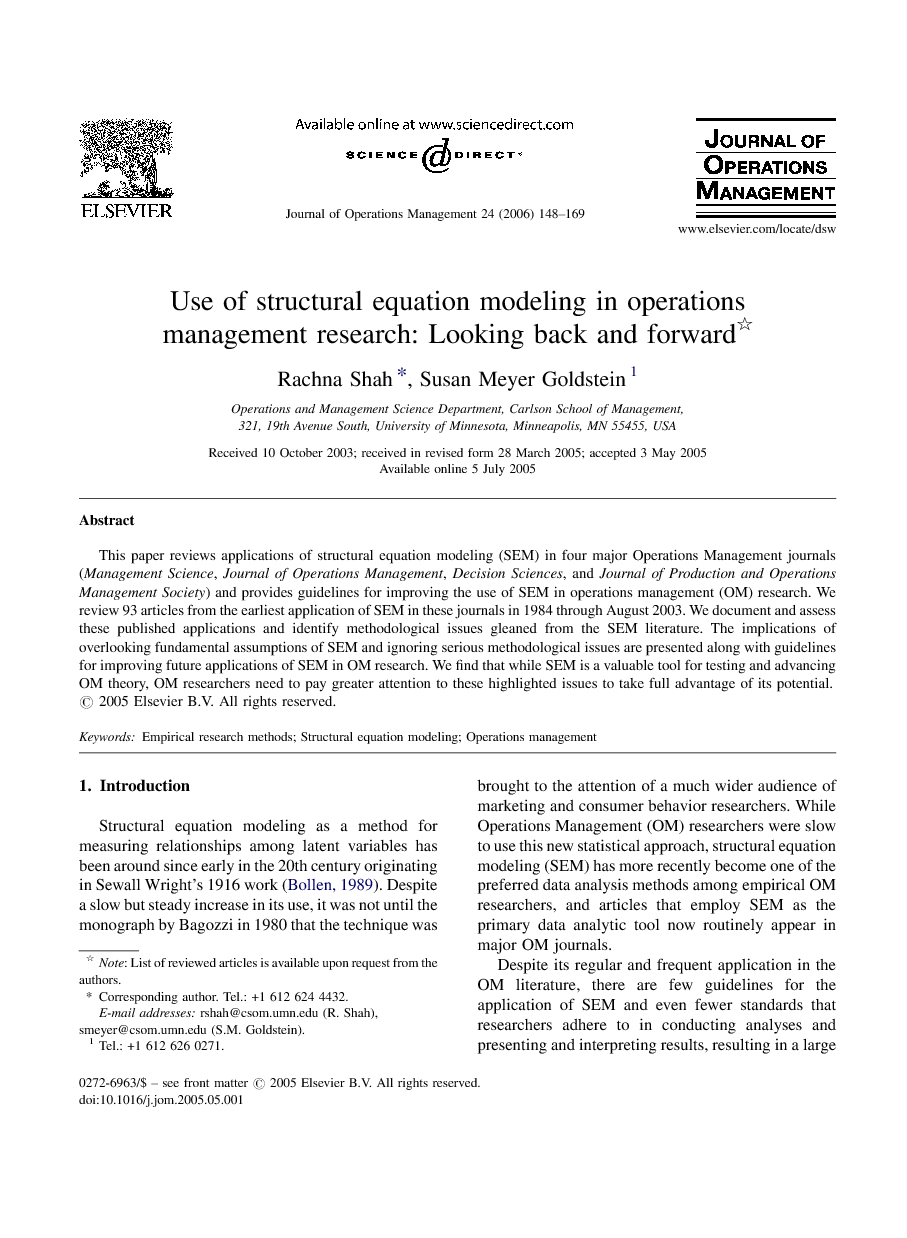 This paper reviews applications of structural equation modeling (SEM) in four major Operations Management journals (Management Science, Journal of Operations Management, Decision Sciences, and Journal of Production and Operations Management Society) and provides guidelines for improving the use of SEM in operations management (OM) research. We review 93 articles from the earliest application of SEM in these journals in 1984 through August 2003. We document and assess these published applications and identify methodological issues gleaned from the SEM literature. The implications of overlooking fundamental assumptions of SEM and ignoring serious methodological issues are presented along with guidelines for improving future applications of SEM in OM research. We find that while SEM is a valuable tool for testing and advancing OM theory, OM researchers need to pay greater attention to these highlighted issues to take full advantage of its potential.

Structural equation modeling as a method for measuring relationships among latent variables has been around since early in the 20th century originating in Sewall Wright's 1916 work (Bollen, 1989). Despite a slow but steady increase in its use, it was not until the monograph by Bagozzi in 1980 that the technique was brought to the attention of a much wider audience of marketing and consumer behavior researchers. While Operations Management (OM) researchers were slow to use this new statistical approach, structural equation modeling (SEM) has more recently become one of the preferred data analysis methods among empirical OM researchers, and articles that employ SEM as the primary data analytic tool now routinely appear in major OM journals. Despite its regular and frequent application in the OM literature, there are few guidelines for the application of SEM and even fewer standards that researchers adhere to in conducting analyses and presenting and interpreting results, resulting in a large variance across articles that use SEM. To the best of our knowledge, there are no reviews of the applications of SEM in the OM literature, while there are regular reviews in other research areas that use this technique. For instance, focused reviews have appeared periodically in psychology (Hershberger, 2003), marketing (Baumgartner and Homburg, 1996), MIS (Chin and Todd, 1995 and Gefen et al., 2000), strategic management (Shook et al., 2004), logistics (Garver and Mentzer, 1999), and organizational research (Medsker et al., 1994). These reviews have revealed vast discrepancies and serious flaws in the use of SEM. Steiger (2001) notes that even SEM textbooks ignore many important issues, suggesting that researchers may not have sufficient guidance to use SEM appropriately. Due to the complexities involved in using SEM and problems uncovered in its use in other fields, a review specific to OM literature seems timely and warranted. Our objectives in conducting this review are three-fold. First, we characterize published OM research in terms of relevant criteria such as software used, sample size, parameters estimated, purpose for using SEM (e.g. measurement model development, structural model evaluation), and fit measures used. In using SEM, researchers have to make subjective choices on complex elements that are highly interdependent in order to align research objectives with analytical requirements. Therefore, our second objective is to highlight these interdependencies, identify problem areas, and discuss their implications. Third, we provide guidelines to improve analysis and reporting of SEM applications. Our goal is to promote improved usage of SEM, standardize terminology, and help prevent some common pitfalls in future OM research.