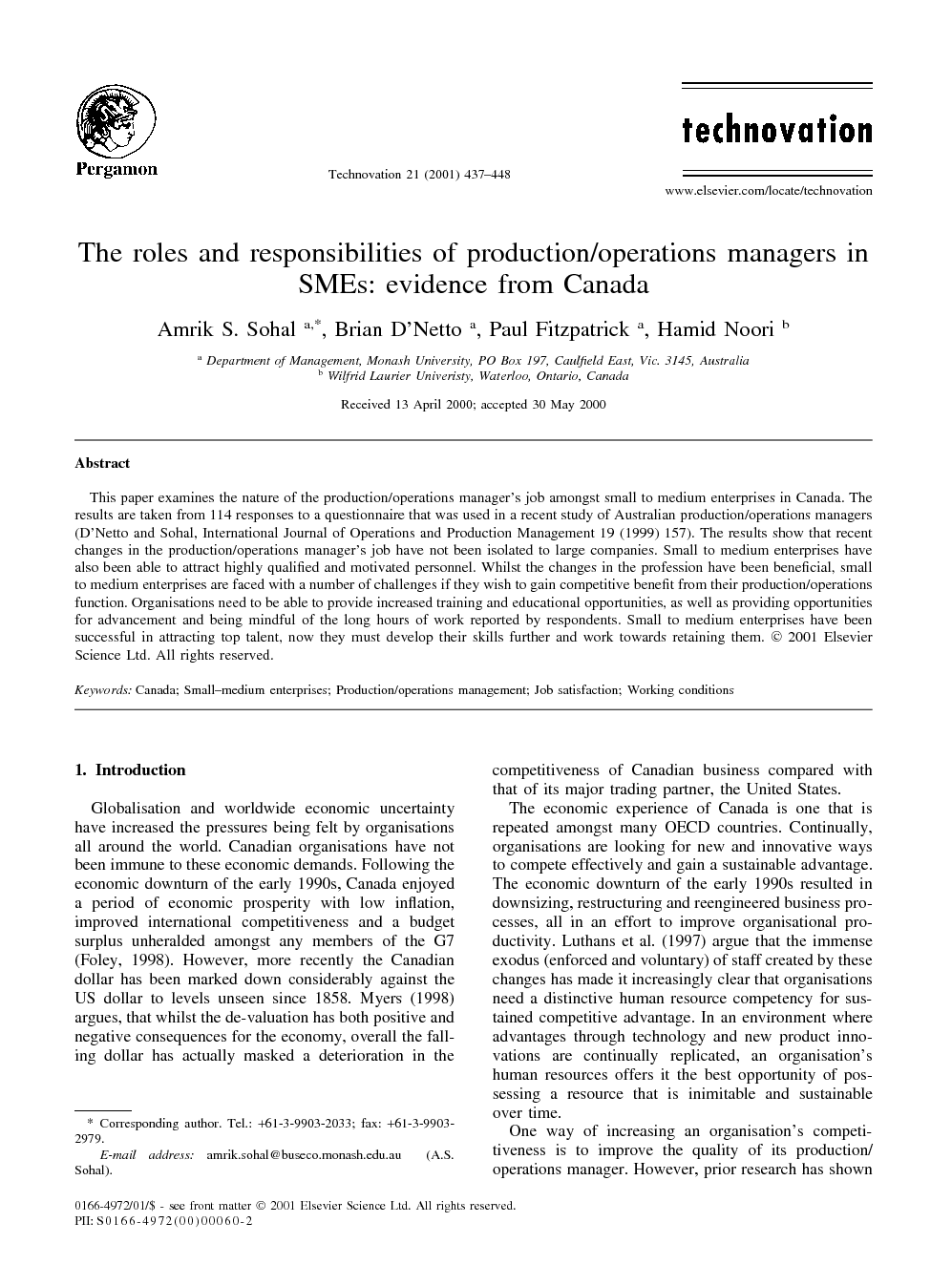 Globalisation and worldwide economic uncertainty have increased the pressures being felt by organisations all around the world. Canadian organisations have not been immune to these economic demands. Following the economic downturn of the early 1990s, Canada enjoyed a period of economic prosperity with low inflation, improved international competitiveness and a budget surplus unheralded amongst any members of the G7 (Foley, 1998). However, more recently the Canadian dollar has been marked down considerably against the US dollar to levels unseen since 1858. Myers (1998) argues, that whilst the de-valuation has both positive and negative consequences for the economy, overall the falling dollar has actually masked a deterioration in the competitiveness of Canadian business compared with that of its major trading partner, the United States. The economic experience of Canada is one that is repeated amongst many OECD countries. Continually, organisations are looking for new and innovative ways to compete effectively and gain a sustainable advantage. The economic downturn of the early 1990s resulted in downsizing, restructuring and reengineered business processes, all in an effort to improve organisational productivity. Luthans et al. (1997) argue that the immense exodus (enforced and voluntary) of staff created by these changes has made it increasingly clear that organisations need a distinctive human resource competency for sustained competitive advantage. In an environment where advantages through technology and new product innovations are continually replicated, an organisation's human resources offers it the best opportunity of possessing a resource that is inimitable and sustainable over time. One way of increasing an organisation's competitiveness is to improve the quality of its production/operations manager. However, prior research has shown that the area of production/operations management has been one that has failed to attract “quality” human resources (Gunn, 1987). Whilst there is a consensus amongst researchers that highly qualified, ambitious, motivated and skilled production/operations managers are required to achieve strategic objectives, a number of researchers have revealed that the profession has consistently failed to attract top talent (Desai and Inman, 1994, Helms, 1989, Oakland and Sohal, 1990, Gunn, 1987 and Gill and Lockyer, 1978). Alternatively, a more recent study conducted by D'Netto and Sohal (1999) found that the overwhelming majority of Australian production/operations managers were highly qualified, well paid and motivated employees. The importance of conducting further research into the area of production/operations management is heightened when the transformation of the roles and responsibilities of the production/operations manager are considered. The above mentioned competitive pressures have changed the production/operations managers role from a department centered approach to cross-functional linkages with marketing, engineering, human resources, finance and accounting. This shift has been partly attributable to flatter organisational structures necessitating fewer staff to take on a greater number of diverse roles. Market pressures, however, have also played a part in driving these changes to the production/operations manager's role. Markets are now demanding new products faster, with fewer modifications and a shorter product life-cycle (Bandyopahyay, 1994). This has forced organisations to re-examine their management of the production/operations function to leverage manufacturing strengths for competitive advantage. As a result, production/operations managers must possess expertise in the use of new technologies and philosophies such as programmable automation, just-in-time, computer integrated manufacturing, statistical process control and total quality management (D'Netto and Sohal, 1999). Effective communication skills and the ability to manage relationships with vendors, customers, governments and regulatory bodies must compliment the aforementioned technical skills for organisations to compete successfully. The objective of this study is to determine whether the changes in the production/operations manager's job, identified amongst Australian production/operations managers in D'Netto and Sohal (1999), can be found in another industrialised nation. The D'Netto and Sohal study found dramatic changes in the qualifications, renumeration, motivation and job satisfaction of production/operations managers in Australia compared to the results of past studies. Consequently the research instrument used was identical to the questionnaire used in that study. Whilst the two studies are very similar, there is one main difference. The Australian study investigated a cross-section of small to very large organisations, whilst the sample investigated in the Canadian study is dominated by small–medium enterprises (SME) employing less than 300 employees (94.8%). The remainder of this paper is structured as follows. The next section provides a brief overview of the research methodology. Respondents to the questionnaires are then profiled, followed by an in-depth analysis and discussion of the data findings. The research findings are broken down into four sections: (i) Backgrounds, past careers and annual salaries of production/operations managers, (ii) Career progression, (iii) Job content and (iv) Reward perceptions. The final section concludes the paper by discussing both the positive and negative developments in the production/operations manager's job and possible areas for improvement.