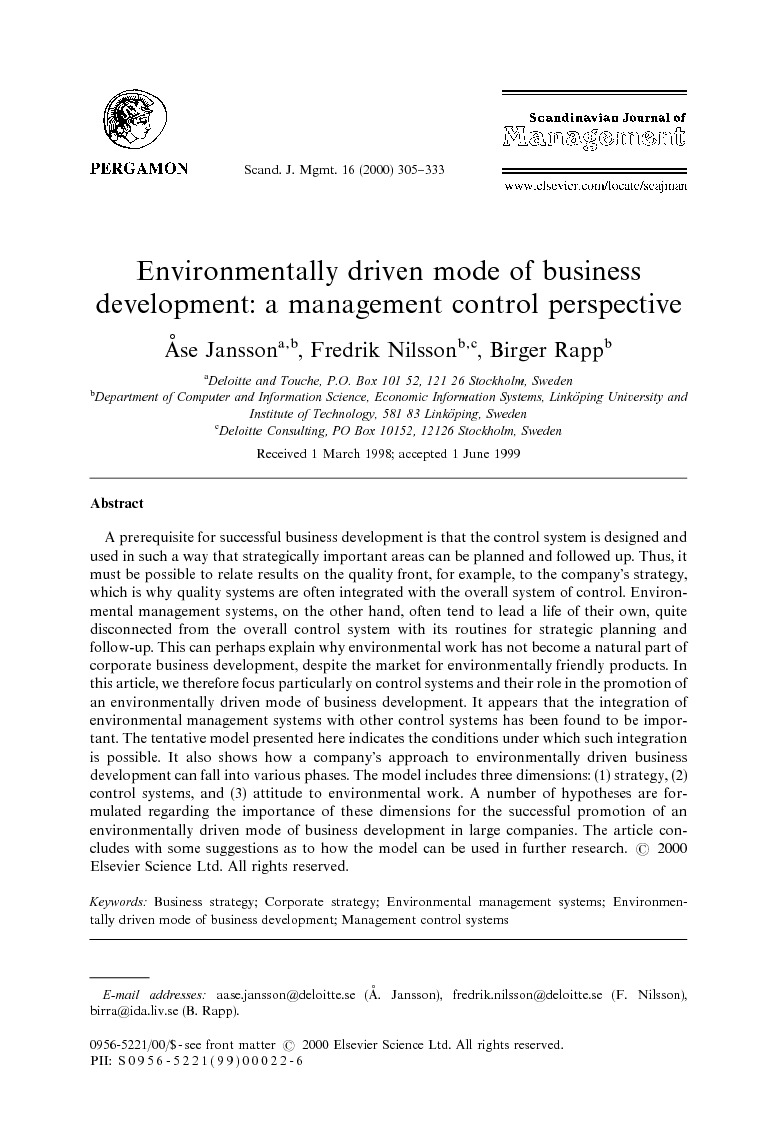 The role of control systems in established and new businesses is becoming more and more important. Competition and rapid changes in the business environment mean that information from a monetary and externally focused control system arrives too late. Other difficulties are that information is distorted and presented at too high a level of aggregation (Johnson & Kaplan, 1987). With a view to bringing control closer to operations while also improving its links with the strategic level, new control methods have been presented. These models are particularly concerned with the way non-monetary key ratios at the business-unit level can be adapted to the strategy pursued (Dixon, Nanni & Vollman, 1990; Lynch & Cross, 1991; Kaplan & Norton, 1996). According to another approach the control systems used for the planning and follow-up of strategically important areas are integrated in something that for the company, is an overall control system. The systems used for quality control are an example of this. The information that these systems provide to management is of great importance, both for strategic planning and for the follow-up of previously decided strategies (Gummesson, 1993, p. 52ff.). To emphasize that systems of this kind are an integral part of the overall control of the typical large company with multiple products and strategic business units, researchers and practitioners both talk about an extended concept of management control (Samuelson, 1992, p. 16ff.). Extended management control includes all control systems that have a clear connection with the company's strategic planning and follow-up (Nilsson, 1997). The planning and follow-up of environmental work, however, do not appear to be included in this extended management control system. Empirical studies of trends in the environmental behaviour of large Swedish companies have found that many companies have routines for policies, measurable aims, plans of action, etc. Despite this, companies envisage major problems in designing and performing environmental strategies (Terrvik, 1995a and Terrvik, 1997), probably because they feel they lack adequate methods, tools and models for the challenge imposed by an environmentally driven mode of business development (cf. Strannegård, Wolff & Agri, 1996). Instead, the environmental management systems of large Swedish companies seem to be used for dealing with societal requirements about reducing environmental impact. Only a few such companies appear to have environmental management systems integrated with their other control systems (cf. Åhsbom, 1995; Belz & Strannegård, 1996). International studies have reached similar conclusions. Some attempts have been made to integrate standardized environmental management systems with quality management systems (Gelber, Hanf & Hüther, 1997; Hortensius & Barthel, 1997), but there are few examples of the planning and follow-up of environmental work forming a natural part of the overall running of the company. For example, according to Epstein (1996), companies fail to follow-up their environmental costs in such a way that these costs can be traced back to specific units, processes or products. Nor is the income from more environmentally friendly products and services reported in any systematic way. Thus, as company management does not have access to this type of information, environmental issues are given low priority in strategic planning. The fact that environmental management systems are not integrated with other control systems also makes it difficult to follow-up the implementation of an environmental strategy — even if one were to exist. All in all, control systems can play an important role in promoting an environmentally driven mode of business development. As noted above, a major problem is that environmental management systems are not integrated with the other control systems in companies, which means that environmental issues are not included as a natural part of the strategic planning or of the follow-up of previously determined strategies. These and similar problems have already been noted by several researchers who have also emphasized the need for research into the role of control systems in generating an environmentally driven mode of business development (Jönsson, 1995; Terrvik, 1995a; Strannegård et al., 1996). Since few empirical studies have been conducted in the area, the main aim of this article is to broaden the theoretical base for further research. As a step in achieving this aim a theoretical model and related hypotheses have been developed. The model shows that the process of promoting an environmentally driven mode of business development can be divided into several phases. The model also shows that the process is influenced by the integration of environmental management systems with other control systems as well as by strategies and management attitudes. A task for future research will be to establish the importance of these dimensions, to the promotion of environmentally driven modes of business development, by testing the hypotheses. The following section provides a review of the literature in order to give some depth to the discussion of the main model dimensions. The review is followed by a detailed presentation and discussion of the tentative model. We then discuss how the model can be used in further research. The article concludes with a summary of the main results.