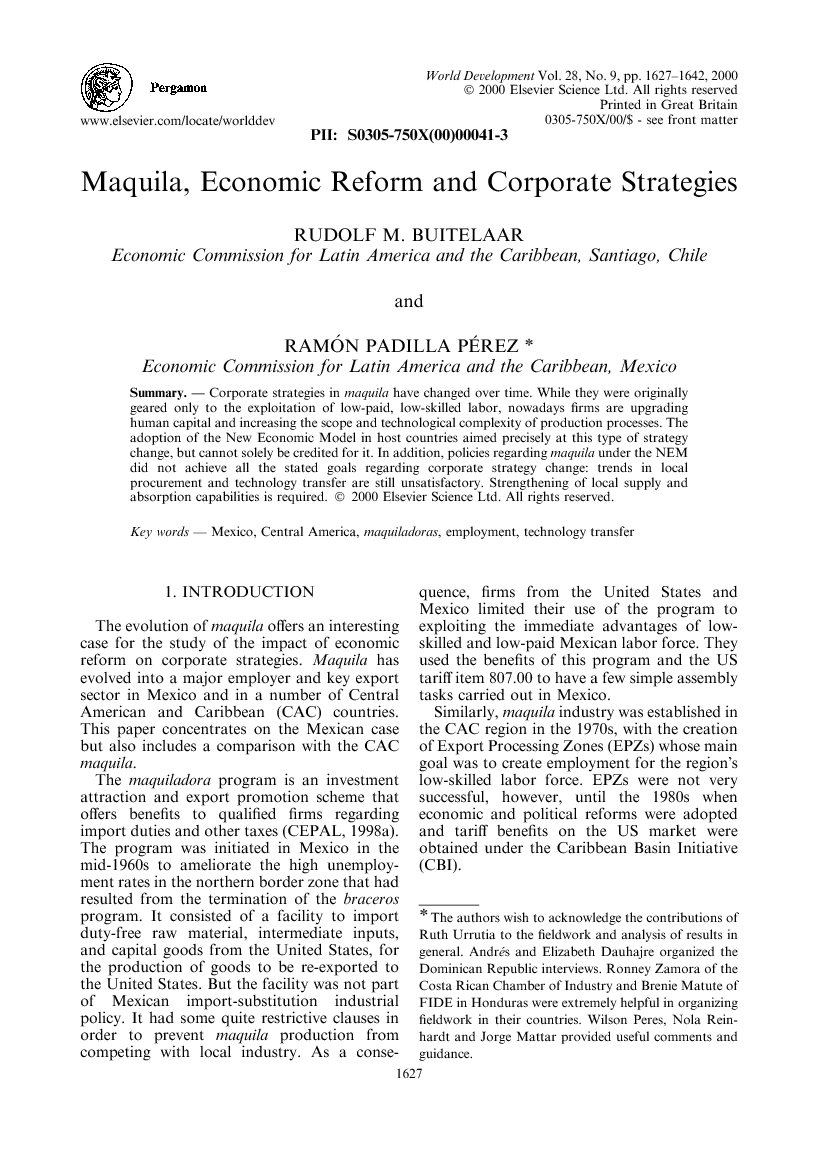 Corporate strategies in maquila have changed over time. While they were originally geared only to the exploitation of low-paid, low-skilled labor, nowadays firms are upgrading human capital and increasing the scope and technological complexity of production processes. The adoption of the New Economic Model in host countries aimed precisely at this type of strategy change, but cannot solely be credited for it. In addition, policies regarding maquila under the NEM did not achieve all the stated goals regarding corporate strategy change: trends in local procurement and technology transfer are still unsatisfactory. Strengthening of local supply and absorption capabilities is required.

The evolution of maquila offers an interesting case for the study of the impact of economic reform on corporate strategies. Maquila has evolved into a major employer and key export sector in Mexico and in a number of Central American and Caribbean (CAC) countries. This paper concentrates on the Mexican case but also includes a comparison with the CAC maquila. The maquiladora program is an investment attraction and export promotion scheme that offers benefits to qualified firms regarding import duties and other taxes (CEPAL, 1998a). The program was initiated in Mexico in the mid-1960s to ameliorate the high unemployment rates in the northern border zone that had resulted from the termination of the braceros program. It consisted of a facility to import duty-free raw material, intermediate inputs, and capital goods from the United States, for the production of goods to be re-exported to the United States. But the facility was not part of Mexican import-substitution industrial policy. It had some quite restrictive clauses in order to prevent maquila production from competing with local industry. As a consequence, firms from the United States and Mexico limited their use of the program to exploiting the immediate advantages of low-skilled and low-paid Mexican labor force. They used the benefits of this program and the US tariff item 807.00 to have a few simple assembly tasks carried out in Mexico. Similarly, maquila industry was established in the CAC region in the 1970s, with the creation of Export Processing Zones (EPZs) whose main goal was to create employment for the region’s low-skilled labor force. EPZs were not very successful, however, until the 1980s when economic and political reforms were adopted and tariff benefits on the US market were obtained under the Caribbean Basin Initiative (CBI). Under the New Economic Model (NEM), starting with the economic reforms of the mid-1980s, the Mexican Government and the participating firms began to see maquila as an integrated part of export-led development and its specific legal framework was transformed. The aim was to change the corporate strategies, promote investment in human capital and the transfer of technology, and foster integration with local Mexican manufacturing industry. In the CAC region, a similar reorientation under the NEM has taken place, to a limited extent, in Costa Rica. Critics of export-led development still refer to maquila to illustrate that opening-up only means low wages, disarticulation of production chains, few backward and forward linkages, no technological effort or learning processes, and subordination to the strategies of foreign firms. Thus, two central questions arise that are the subject of this paper. First, to what extent have maquila firms indeed changed their competitive strategies from exploiting only the static gain of low wages to creating dynamic gains through training, technological learning and local networking? Second, what role has economic reform in Mexico played in bringing about any change in corporate strategies? The paper is organized as follows. First, a brief overview will be presented of the origin and evolution of maquila in Mexico, against the backdrop of Mexican and US public policies, international competition and technological change. Second, the performance of the maquila program and its corporate strategies with regard to its stated objectives are analyzed. This section uses the results and insights from a firm survey conducted by the authors in 1997 (CEPAL, 1998a). 1 The survey was also applied to maquila firms in Central America and the Dominican Republic, 2 and the third section compares the situation in these countries with that of Mexico. The paper concludes with a short reflection on regime change and corporate strategies. It has to be pointed out that maquila is not an industry in the usual sector-specific sense of the word. The maquila programs and laws constitute an investment attraction and export promotion scheme. Hence, a great variety of maquila firms exist in different industries. Two important common features have been suggested in the literature: the orientation to the market of the United States, and the intensive use of relatively low-cost labor (Carrillo, 1997).

Corporate strategies in maquila industries in Mexico have changed notably over the years. In the 1960s and 1970s, maquila plants were used for some assembly operations that required little skill and lots of hands. The output was typically a large volume of commodity-type products in which quality played a minor role. Nowadays, international corporations use maquiladora plants for an ample range of assembly operations, and sometimes complex manufacturing processes. Exceptionally, some design functions are being transferred to Mexico. Furthermore, as is also observed in Central American and Dominican maquila, quality and timeliness are now the crucial elements of competitiveness, on top of low production costs. Workers in maquiladora plants are nowadays more likely to have at least secondary education and perform various functions. Highly qualified personnel are nowadays a greater percentage of total workforce. Maquiladora plants have a very active human capital strategy, including strategic alliances with local educational institutions. They are also permanently working on the improvement of the systems of organization and production. Average firm size has been increasing significantly, showing an expansion of maquila operations. These changes in corporate strategies have brought closer some of the goals of public policy regarding the maquila program. The goal of export growth and contribution to the trade balance has clearly been achieved. Maquila generates an important number of jobs and skill improvement is clearly a common objective of companies and governments. But the quality of the jobs, in the sense of the level of real wages, continues to be a weakness. The same situation occurs with local procurement. Would the change in corporate strategies in Mexican maquiladoras have occurred without the regime change of the mid-1980s? Probably not, because the opening-up of the Mexican economy and the creation of a clear and reliable legal framework gave corporations the confidence that the export-and market-oriented development model was not to be altered easily. When maquila still was an exception to the import-substitution regime, corporate strategies had only short-run objectives. Operations could be ended or removed easily; long-run investments or heavy sunk costs were avoided. Economic reform allowed corporations to invest more (human and physical capital) and to work with a longer time frame. A similar situation occurred in Central America and the Dominican Republic, in the sense that economic reforms have created favorable conditions not only for the arrival of maquiladora firms but also for the installation of plants with long-term projects. A special case is the microelectronic maquila in Costa Rica. Several measures to improve the economic environment and upgrade physical and human capital were implemented. As a result, a new kind of maquiladora activity is arriving, but it is not clear that the “new maquila” represents or will bring a technological leap. Economic reforms were probably a necessary, but not a sufficient condition for the reorientation of corporate strategies. The introduction of post-Fordist production techniques, with its attention to the price-quality relation and the need for better skilled and polyfunctional human resources, was a universal trend. Transnational corporations had to take part in these trends or they would have lost their place in the market. In the same way, nowadays a new international tendency is taking place to concentrate in the same location the manufacturing and the design activities to take advantage of the permanent interaction between both departments (third generation maquila). It is also clear that the economic reforms as such were not a sufficient condition for corporate strategies to change in every way the governments had hoped for. Regarding technology transfer and construction of local supplier networks, the results of the maquila program have to be considered definitely disappointing, and in Mexico the economic reforms do not seem to have changed the initial situation. On the one hand, great technological and financial constraints limit adequate supply. On the other hand, transnational corporations do not attach a very high priority to exploring some forms of technology transfer and the development of local supplier networks. To accomplish these goals, governments will need substantive initiatives to upgrade local technological capabilities, and policies to attract a new kind of firm interested in technology transfer schemes apart from modern management systems and simple manufacturing processes.