عنوان انگلیسی
The folly of theorizing “A” but testing “B”: A selective level-of-analysis review of the field and a detailed Leader–Member Exchange illustration
دانلود فوری مقاله + سفارش ترجمه 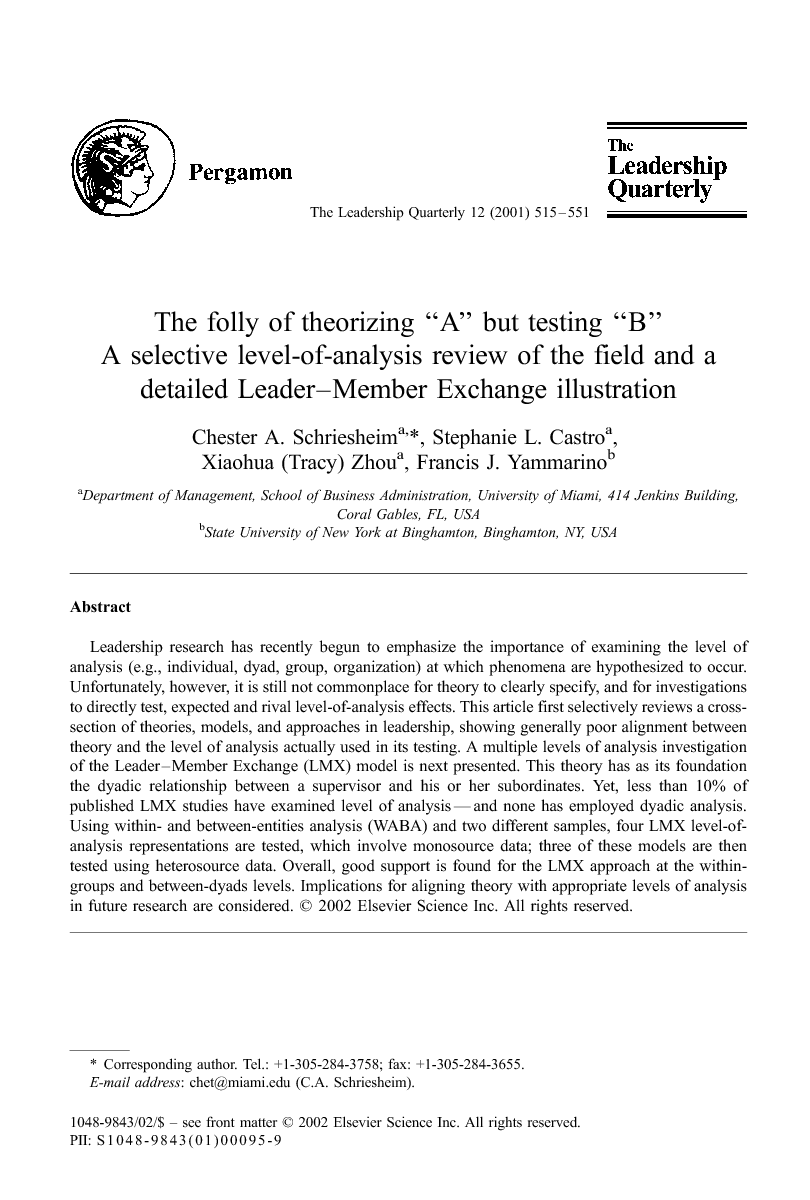 Leadership research has recently begun to emphasize the importance of examining the level of analysis (e.g., individual, dyad, group, organization) at which phenomena are hypothesized to occur. Unfortunately, however, it is still not commonplace for theory to clearly specify, and for investigations to directly test, expected and rival level-of-analysis effects. This article first selectively reviews a cross-section of theories, models, and approaches in leadership, showing generally poor alignment between theory and the level of analysis actually used in its testing. A multiple levels of analysis investigation of the Leader–Member Exchange (LMX) model is next presented. This theory has as its foundation the dyadic relationship between a supervisor and his or her subordinates. Yet, less than 10% of published LMX studies have examined level of analysis—and none has employed dyadic analysis. Using within- and between-entities analysis (WABA) and two different samples, four LMX level-of-analysis representations are tested, which involve monosource data; three of these models are then tested using heterosource data. Overall, good support is found for the LMX approach at the within-groups and between-dyads levels. Implications for aligning theory with appropriate levels of analysis in future research are considered.

In any scientific endeavor, periodic review is necessary to consolidate the gains of past research and highlight areas that need increased future scholarly attention. Typically, reviews of the leadership field and its various theories and approaches have focused on conceptual and/or theoretical concerns and have dealt with basic measurement and/or analysis issues only marginally or tangentially. Our Yearly Review article differs from this pattern by focusing on one important concern—level of analysis—that is both theoretical/conceptual and measurement/analytical but has usually been neglected in previous reviews of the field. Our examination is not encyclopedic and we will not cover all aspects related to level-of-analysis issues; other writings are meant to be more exhaustive and interested readers are referred to these works (cf. Dansereau & Yammarino, 1998a and Dansereau & Yammarino, 1998b). Additionally, we should note that our general review of the field focuses on representative samples of various approaches as they have evolved to their present states. We do this to demonstrate the generality of the issues that we raise and to highlight that level-of-analysis concerns are unlikely to be satisfactorily addressed unless scholars explicitly and intentionally do so. Finally, we focus on one leadership approach (Leader–Member Exchange, LMX; Graen & Uhl-Bien, 1995) in considerable detail and show how it may be more thoroughly tested with respect to critical level-of-analysis predictions. Two major reasons exist for selecting the LMX approach for detailed illustration. First, a large amount of research has been conducted on this approach Gerstner & Day, 1997 and Liden et al., 1997. Second, and more importantly, while LMX theory focuses on leader–follower dyads, not one empirical study has explored dyadic representations of the LMX process (Schriesheim, Castro, & Cogliser, 1999). Thus, existing LMX research may be viewed as fundamentally uninformative about the theory—since it is a theory of dyadic (leader–member) interaction but its predictions have not been tested at the dyadic level of analysis. This theme is more fully developed later but we believe that the same issues exist concerning most other leadership approaches. The LMX approach simply provides a clear and straightforward example of how level-of-analysis alternatives may be formulated and tested and why it is important that the theory clearly and explicitly states its level-of-analysis assumptions so as to facilitate the conduct of appropriate research. The thesis of this article, then, can be simply stated: We believe that it is absolutely critical that scholars specify the level of analysis at which their hypotheses, frameworks, models, and/or theories hold so that they may be adequately tested. We also believe that it is absolutely necessary that tests of any hypothesis, framework, model, and/or theory be conducted at the proper level(s) of analysis and that tests explicitly rule out inappropriate or competing (rival) levels of analysis. Otherwise, Type I or II errors may occur (i.e., improperly rejecting or not rejecting a particular null hypothesis; Dansereau, Alutto, & Yammarino, 1984; cf. Schriesheim, Cogliser, & Neider, 1995), and we may wind up erecting theoretical skyscrapers on foundations of empirical jello.

6.1. Raw score correlations Table 1 presents the variable means, standard deviations, and zero-order intercorrelations. As mentioned earlier, all of the reliabilities were acceptable in both samples (above .7; Nunnally & Bernstein, 1994). As shown in Table 1, most of the variable intercorrelations are statistically significant (P<.05) for both samples. However, as would be expected due to monosource bias, the correlation between supervisor-perceived exchange (SLMX) and supervisor-perceived control (SCONT) is higher than the correlation between SLMX and subordinate-perceived control (CONT) (correlations of .53 versus .34 for the bankers, and .49 versus .35 for the engineers). The same pattern exists for subordinate-perceived exchange (LMX), subordinate-perceived control (CONT), and supervisor-perceived control (SCONT) (r values of .44 versus .16 for the bankers, and .47 versus .30 for the engineers). This obviously supports the desirability of examining Models 1a′, 1b′, and 3′, where potential same-source bias effects are eliminated. 6.2.1. Bank sample In the bank sample, the WABA I tests of statistical (F test) and practical (E test) significance shown in Table 2 indicate that the variance for most of the variables in the models is stronger between entities than within entities (see the “Inference” column). The sole exception to this generalization is for the control variable in Models 3 and 3′, which statistically and practically shows more variance within- than between dyads. 6.2.2. Engineer sample The WABA I results for the engineer sample are similar in pattern to that of the bank sample, but several notable differences exist. Again, most of the variance is stronger between entities than within entities. However, none of these differences is practically or statistically significant. Also, for Models 3 and 3′, there is more within-than between-dyad variance for the LMX variable and the control variable, although the first difference is very small (.01) and neither difference shows practical or statistical significance. These results therefore support an inference of “both,” indicating that there is variance within- and between-entities for all of the engineer sample models.