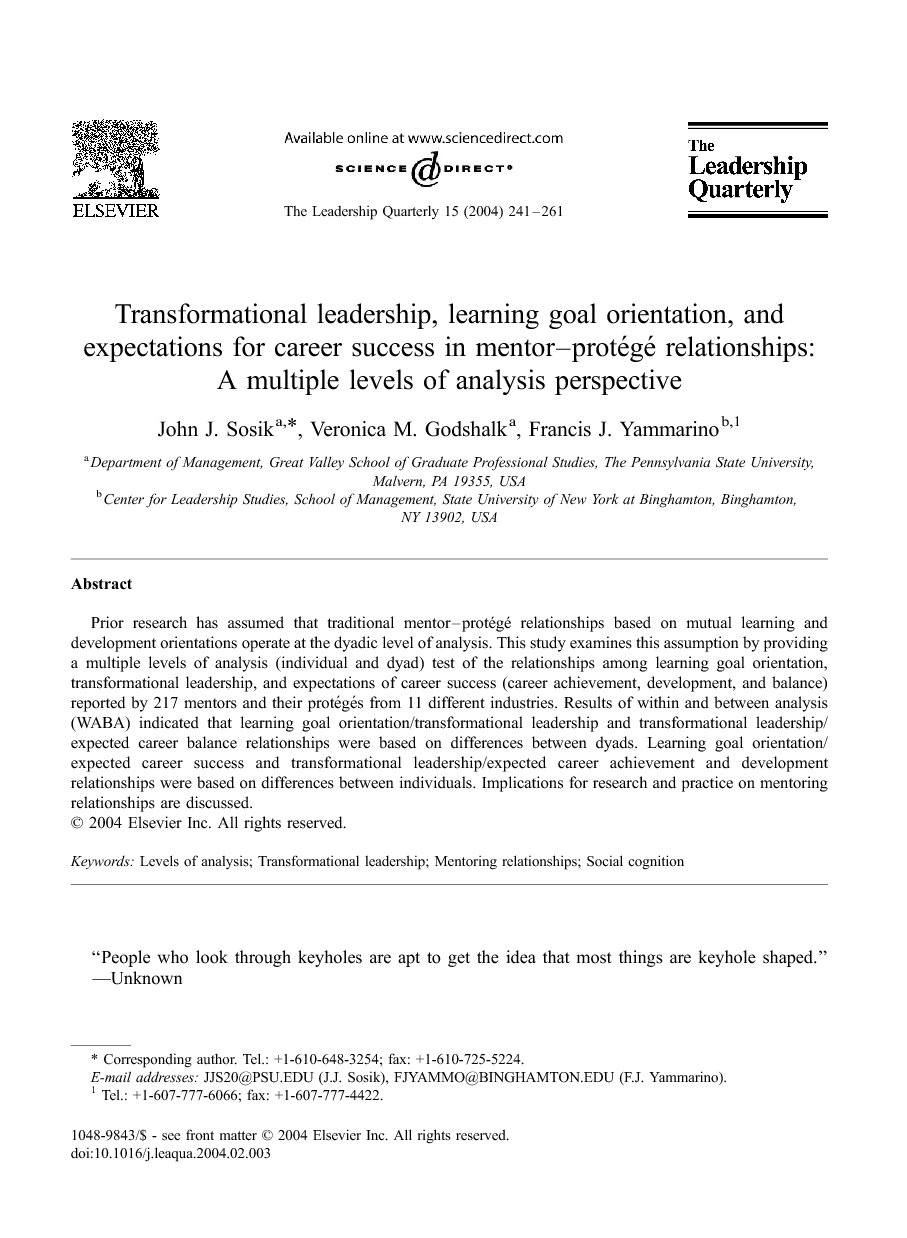 Social cognitive theories of career development highlight the importance of learning and developmental relationships in elevating expectations of career success (Lent, Brown, & Hackett, 1994). Mentoring relationships in organizations represent learning and developmental relationships (Higgins & Kram, 2001). Several theories have been proposed to describe how mentor–protégé relationships form based on mutual learning and development orientations; those include theories of mentoring functions (Kram, 1985), personal learning (Lankau & Scandura, 2002), human development (Levinson, Darrow, Klein, Levinson, & McKee, 1978), social support or helping (McManus & Russell, 1997), leader–member exchange (Thibodeaux & Lowe, 1996), and transformational leadership (Sosik & Godshalk, 2000). These theories assume that the traditional mentor–protégé relationship is a dyadic-level phenomenon that develops based on mutual personal learning and development orientations of the mentor and protégé and has outcomes for both parties. To date, this assumption has not been specified explicitly in the conceptualization of mentoring nor has it been tested explicitly in empirical work on mentoring. However, as noted by several writers (e.g., Dansereau et al., 1984, Glick & Roberts, 1984, Klein & Kozlowski, 2000 and Rousseau, 1985), levels of analysis must be a part of both conceptualization and testing of constructs. Failure by prior researchers to address this issue is unusual since the traditional form of mentoring has typically been described as a dyadic exchange relationship that develops based on perceived similarity and mutual attraction (Ragins, 1997) and offers benefits to both mentors and protégés (Kram, 1985). This view would be manifested in between-dyad differences and within-dyad agreement in responses of mentors and protégés and indicate that mentoring relationships may operate at the dyadic level of analysis. Other research streams indicate that mentors and protégés bring their own unique personal characteristics (e.g., Dreher & Cox, 1996), attributional, perceptual, and cognitive processes Mullen, 1994 and Ragins, 1997, and expectations (Ragins & Scandura, 1994) into their relationships. These personal attributes would be manifested in individual differences in responses of mentors and protégés and therefore indicate that mentoring relationships may operate at the individual level of analysis. Overall, therefore, these competing theoretical explanations suggest that mentoring relationships may operate at the individual and dyadic levels of analysis and beg for specification and examination of level of analysis issues in mentoring studies. Unfortunately, a complete investigation of boundary conditions for mentoring models, expressed as levels of analysis, which include a priori hypotheses and measures from multiple levels of analysis, has not yet been reported in the literature. Moreover, most previous research has examined same-source protégé or mentor ratings of variables associated with mentorship (Ragins, 1997). To address these concerns, in the present study, two alternative levels of analysis (individuals and mentor–protégé dyads) are specified and examined with different-source (mentor and protégé) data to assess relationships among transformational leadership, learning goal orientation, and expected career success, variables associated with the traditional form of mentorship. Accordingly, we followed recommendations outlined in Klein and Kozlowski (2000) and others to explicitly consider levels of analysis issues in conceptualization and testing of these relationships. We hypothesize and test the relationships between these constructs at the individual level (the typical approach used in the literature) before asserting and testing them at a higher level of analysis (i.e., the dyadic level where the literature suggests the traditional form of mentoring relationships should operate). The present study is valuable from both practical and theoretical viewpoints. Because organizations are increasingly using mentoring programs to enhance their human resources and organizational learning (Lankau & Scandura, 2002), our study would be helpful to developers and administrators of mentoring programs responsible for cultivating the social capital of their organizations. For example, whereas prior research has found a positive relationship between the presence of a mentor and protégés' reports of expected career success, little is known about the developmental behaviors that help shape such expectations. Our study contributes by evaluating whether transformational leadership behaviors displayed by mentors may be associated with the expectations for career success of the protégé held by protégés and their mentors. An additional unique contribution of this study is its combining investigation of social cognitive/ learning perspectives of transformational leadership in mentoring relationships, learning goal orientation, career expectations, and levels of analysis. Our study identifies boundary conditions and appropriate levels of analysis for specifying and testing relationships between variables proposed in models of mentoring (Kram, 1985) and career development (Lent et al., 1994), and differentiates between mentoring-related constructs that operate based on differences between individuals and dyads. Most mentorship research has focused on the individual level of analysis, while describing traditional mentorships as dyadic relationships. To our knowledge, this study is the first to examine levels-of-analysis issues from both theoretical and data-analytic perspectives in the mentoring literature, and the first to respond to calls to tease out the effects of individual and dyadic attributes in the mentoring relationship (Ragins, 1997). Without an explicit accounting for levels of analysis, both conceptually and empirically, knowledge of mentoring relationships is inadequate and incomplete.