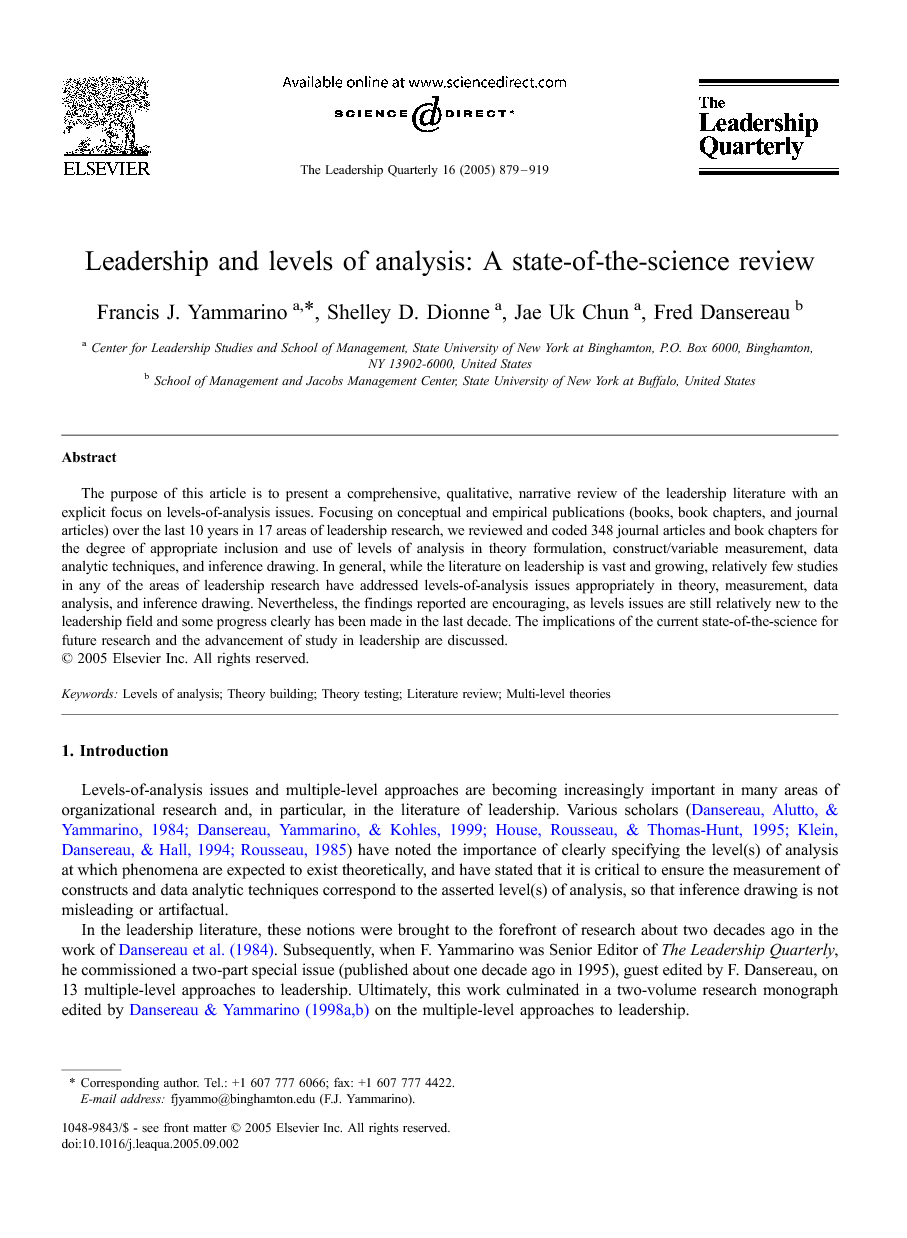 The purpose of this article is to present a comprehensive, qualitative, narrative review of the leadership literature with an explicit focus on levels-of-analysis issues. Focusing on conceptual and empirical publications (books, book chapters, and journal articles) over the last 10 years in 17 areas of leadership research, we reviewed and coded 348 journal articles and book chapters for the degree of appropriate inclusion and use of levels of analysis in theory formulation, construct/variable measurement, data analytic techniques, and inference drawing. In general, while the literature on leadership is vast and growing, relatively few studies in any of the areas of leadership research have addressed levels-of-analysis issues appropriately in theory, measurement, data analysis, and inference drawing. Nevertheless, the findings reported are encouraging, as levels issues are still relatively new to the leadership field and some progress clearly has been made in the last decade. The implications of the current state-of-the-science for future research and the advancement of study in leadership are discussed.

In terms of the overall results, when combining the assessments and evaluations of levels-of-analysis issues for all criteria, the findings indicate that 19 of 211 empirical publications on the 17 approaches to leadership, or 9%, addressed levels-of-analysis issues appropriately in all four areas of theory and hypothesis formulation, measurement, data analysis, and inference drawing. Thus, in the last decade, the following 19 empirical publications offer encouragement to the field that levels issues are in fact “addressable” and provide a template or “best practices” approach for researchers to follow in their own work: • Berson and Avolio (2004) • Cogliser and Schriesheim (2000) • Dansereau et al., 1995 and Dansereau et al., 1998a • Hofmann, Morgeson, and Gerras (2003) • Howell and Hall-Merenda (1999) • Kark, Shamir, and Chen (2003) • Kim & Yukl, 1995 and Kim & Yukl, 1998 • Schriesheim, Castro, & Yammarino (2000) • Schriesheim, Castro, Zhou, and Yammarino (2001) • Schriesheim et al., 1995 and Schriesheim et al., 1998a • Schriesheim, Neider, and Scandura (1998) • Shamir, Zakay, Breinin, and Popper (1998) • Sivasubramaniam, Murry, Avolio, and Jung (2002) • Sosik, Avolio, and Kahai (1998) • Sosik, Godshalk, and Yammarino (2004) • Sosik, Kahai, and Avolio (1998) • Tosi, Misangyi, Fanelli, Waldman, and Yammarino (2004) • Yammarino, Dubinsky, Comer, and Jolson (1997) • Yammarino, Spangler, and Dubinsky (1998) . In contrast, the remainder of the field of leadership research, as represented by these 17 leadership approaches, seems built upon empirical publications (about 91% of those reviewed here) that do not address adequately levels-of-analysis issues. This assessment is a troubling state-of-the-science, especially given that we have had knowledge of these issues for two decades (e.g., Dansereau et al., 1984* and Rousseau, 1985*) and repeated calls to attend to them over the past decade (e.g., Bass, 1990• and Bass, 2002*). Perhaps, as implied by much of the work reviewed here, leadership approaches are generally an individual leader-style phenomenon and thus this assessment is less bothersome. Nevertheless, even in these cases, alternative levels of analysis need to be “eliminated” theoretically and empirically. Moreover, other constructs (i.e., precursors, consequences, mediators, moderators) in the various theories and models of leadership may operate at other levels of analysis. Again, we believe fuller theoretical specification, measurement, data analysis, and inference drawing, with explicit consideration of levels of analysis for leadership approaches, are required to advance theory building and theory testing. Specifically, to help foster these efforts, we offer the following brief recommendations for conducting multi-level research in all areas of leadership. ▪ In terms of theoretical recommendations: 1. Define the level of analysis of the unit(s) of interest, i.e., the entity (entities) to which theoretical generalizations apply. 2. Define the level of analysis of the associated concepts, constructs, variables, and relationships. 3. Provide a theoretical justification for everything included in #1 and #2 above. 4. Specify the boundary conditions, including and based upon levels of analysis, for everything in #1, #2, and #3 above. ▪ In terms of measurement recommendations: 1. Construct measures at the same level of analysis depicted in the theory, models, and hypotheses. 2. If this is not possible or feasible, employ appropriate aggregation (or disaggregation) techniques and justify the use of these techniques. 3. Further validate a measure, even an established measure, if it has been modified or adapted to account for various or different levels of analysis than originally intended. ▪ In terms of data analytic technique recommendations: 1. Permit theory (variables, relationships, and levels of analysis) to determine the multi-level technique to be used. 2. Employ appropriate multi-level techniques if the “referent(s)” (entities of interest) are at a level of analysis higher than the individual level. ▪ In terms of inference drawing recommendations: 1. Include levels of analysis in both theory (i.e., as the entities) and data (i.e., as the samples and subjects). 2. State which relationships hold across different levels of analysis in terms of multi-level, cross-level, mixed effects, and mixed determinants models. By following these general recommendations and fully and explicitly incorporating multiple levels of analysis in theoretical formulations, measurement, data analysis, and inference drawing, more comprehensive and integrative theories of leadership can be built and tested. We hope this state-of-the-science review of the literature has provided readers with hope. Ignorance of levels-of-analysis issues has hurt prior work on leadership but is providing much needed improvement in current research. Knowledge of levels-of-analysis issues will advance theory building and theory testing in all areas of leadership research. We encourage readers to “lead” the charge in this literature through the use of multiple levels of analysis in theory formulation, measurement, data analysis, and inference drawing.