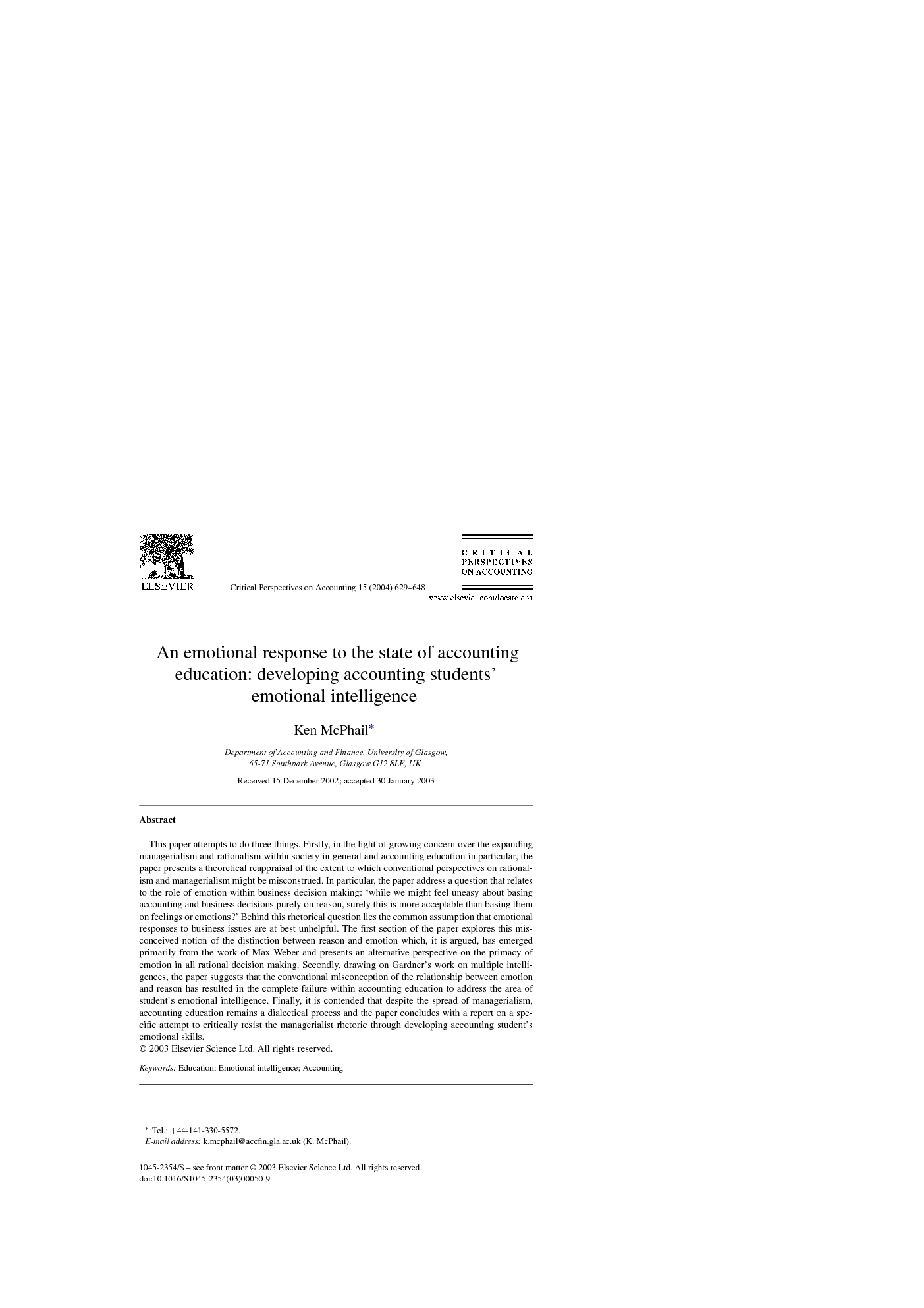 This paper attempts to do three things. Firstly, in the light of growing concern over the expanding managerialism and rationalism within society in general and accounting education in particular, the paper presents a theoretical reappraisal of the extent to which conventional perspectives on rationalism and managerialism might be misconstrued. In particular, the paper address a question that relates to the role of emotion within business decision making: ‘while we might feel uneasy about basing accounting and business decisions purely on reason, surely this is more acceptable than basing them on feelings or emotions?’ Behind this rhetorical question lies the common assumption that emotional responses to business issues are at best unhelpful. The first section of the paper explores this misconceived notion of the distinction between reason and emotion which, it is argued, has emerged primarily from the work of Max Weber and presents an alternative perspective on the primacy of emotion in all rational decision making. Secondly, drawing on Gardner’s work on multiple intelligences, the paper suggests that the conventional misconception of the relationship between emotion and reason has resulted in the complete failure within accounting education to address the area of student’s emotional intelligence. Finally, it is contended that despite the spread of managerialism, accounting education remains a dialectical process and the paper concludes with a report on a specific attempt to critically resist the managerialist rhetoric through developing accounting student’s emotional skills.

Within the critical accounting literature there is growing interest in emotion. The introduction of poetry into some academic journals, aspects of the environmentalist literature (Hines, 1991), the burgeoning feminist literature, and in particular its critique of Habermas (Broadbent, 1998), along with emotional approaches to accounting and business ethics (McPhail, 1999 and McPhail, 2001) are just a few examples of where the literature has taken an emotional turn. It would seem that at least some of this interest in emotion represents a reaction against the perceived increasing rationalisation in most spheres of public and private life. This paper attempts to contribute to this literature by critically analysing conventional conceptions of both reason and emotion. The paper address a question that relates to the position of emotion within business decision making in general: ‘while we might be concerned about the spread of rationalism, would not it be dangerous to encourage accountants to make decisions based on feelings or emotions.’ Behind this rhetorical question lies the now common sense assumption that emotional responses to business issues are distorting and that one should therefore not allow one’s feelings to cloud one’s judgements. This paper however attempts to show that this view of emotion, although widely accepted, is nevertheless misconceived. The paper argues that the conventional dichotomy between reason and emotion cannot be sustained under close analysis and that contrary to the prevailing view, emotions are central in all rational decision making processes. The paper draws on this analysis to suggest that a developed emotional intelligence is crucial for critically engaging with the world. As such one of the key objectives of the paper is to introduce emotion as a legitimate field of concern into the critical accounting education literature in the same way that organisational theorists have attempted to introduce emotion as a legitimate aspect of organisational studies (Ashforth and Kreiner, 2002; Goffman, 1956; Fineman, 1993). Historically the study of emotion has generally tended to be concerned with its negative aspects. A classic example of this is, Le Bon, 1895 and Barbalet, 2001). In this work, Le Bon shows the dangerous consequences of allowing emotion to determine action. The reason why emotion is conventionally construed as both distorting and dangerous is because of the way in which it is thought to contribute towards irrational behaviour. While there may be some areas where emotion is sanctioned and perhaps even encourage, like sport and familial relationships (Heller, 1979), the negative attitude towards emotion has been particularly strong within the domain of business and even stronger within the field of accounting. The accountant’s commitment to objectivity and representational faithfulness would seem to allow little scope for emotion. Indeed, the prevailing view within the literature has traditionally been that both professional and corporate organisations are sites of instrumental rationality (Barbalet, 2001; Bolton, 2000; Hanoch, 2002). While the literature has begun to question this representation (see, for example, Gambling, 1977) as yet it contains very little analysis of the relationship between reason and emotion within accounting. There is however a paradox here because at the same time as we might feel uneasy about condoning or even encouraging individuals to make decisions based on emotions or feelings there is also a certain amount of uneasiness at the increasing spread of managerialism into domains that previously were considered to be beyond its scope. This paper critically analyses these conventional conceptions of reason and emotion within accounting and it is split into three sections. Section one provides an introduction to emotion and critically analyses the conventional opposition between reason and emotion, specifically within the accounting and business arena. Section two draws on the emerging field of Social and Emotional Learning as a way of introducing the notion that there may be different categories of intelligence. This section also presents some of the characteristics that might form the bases of an emotional intelligence. The final section of the paper reports on an accounting and business ethics course that attempted to develop accounting student’s emotional competencies.

This paper has critically analysed conventional conceptions of reason and emotion. By doing so it has attempted to show that the prevailing view within accounting that emotion is an inadequate and untrustworthy basis for making business decisions, may actually be misplaced. Section one in particular suggested that the dichotomy between reason and emotion is less than obvious. From a critical perspective, emotion can be seen as a key facilitator in our decision making processes and from an even more radical perspective it is possible to conceptualise reason as a particular kind of emotion. The implication to be taken from this argument is that if emotion does play a significant role in social structures and if it is an unavoidable part of decision making then surely it deserves more attention than it has been given to date in the critical accounting education literature and practice. Section two attempted to develop a legitimate case for emotional intelligence and outlined some specific emotional competencies that this form of education might endeavour to develop. It would also seem to follow logically that just as accounting decisions could be based on bad or ill-developed reasoning, so decisions could be and are taken based on an ill-developed emotional intelligence. Thus while the paper concludes by suggesting that accountants should be encouraged to take decisions based on their feelings (because they inevitably do anyway), it also argues that in order to do this critically, accountants need to have a more developed level of emotional intelligence. The concluding section of the paper presented three attempts to proceduralise social and emotional learning within accounting education. However, there is a need for more research into the role of emotion within accounting and particularly how accounting education could be used to increase students critical emotional awareness.