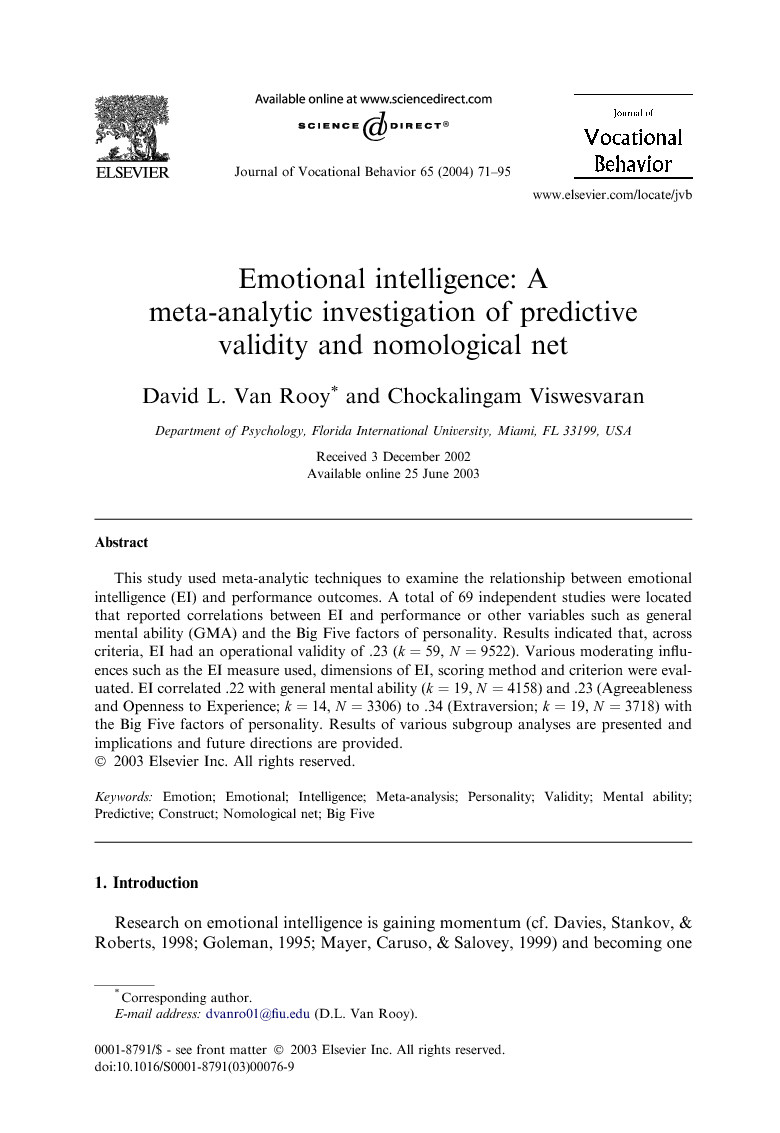 This study used meta-analytic techniques to examine the relationship between emotional intelligence (EI) and performance outcomes. A total of 69 independent studies were located that reported correlations between EI and performance or other variables such as general mental ability (GMA) and the Big Five factors of personality. Results indicated that, across criteria, EI had an operational validity of .23 (k=59, N=9522). Various moderating influences such as the EI measure used, dimensions of EI, scoring method and criterion were evaluated. EI correlated .22 with general mental ability (k=19, N=4158) and .23 (Agreeableness and Openness to Experience; k=14, N=3306) to .34 (Extraversion; k=19, N=3718) with the Big Five factors of personality. Results of various subgroup analyses are presented and implications and future directions are provided.

Research on emotional intelligence is gaining momentum (cf. Davies, Stankov, & Roberts, 1998; Goleman, 1995; *Mayer, Caruso, & Salovey, 1999) and becoming one of the most topical areas in organizational research. To some extent, this recent emphasis on emotional intelligence arises from the renewed interest in personality research (cf. Barrick & Mount, 1991; Hough & Ones, 2001). This article discusses the current state of affairs in emotional intelligence research and then applies meta-analytic procedures to provide the first comprehensive understanding of the power of EI to predict performance outcomes. The article also explores the nomological net of EI with other individual difference variables that psychologists traditionally use to predict behavior: General Mental Ability (GMA) and the Big Five factors of personality. It is difficult to provide an operational definition of EI that is accepted by all. This is not surprising as decades of research on stress, for example, still has not resulted in a universally accepted definition of what constitutes stress; the same can be said of the research on GMA as well as the definition of personality variables (cf. Goldstein, Zedeck, & Goldstein, 2002; Ones, 1993; Ones & Anderson, 2002). The EI concept is typically credited to Salovey and Mayer (1990) who coined the term emotional intelligence but Thorndike (1920) first proposed the idea of social intelligence that some consider akin to EI (but see Mayer & Salovey, 1997). In actuality, EI can best be thought of as a subset of social intelligence (Salovey & Mayer, 1990). However, since the construct of social intelligence is broader than EI, it has often been difficult to discriminate between it and GMA. As a more isolated construct, EI may be more distinct from GMA and personality. In addition, it is possible that measures of EI, especially ability based, are less susceptible to faking than other measures that are more transparent. Nonetheless, others (Kaufman & Kaufman, 2001) argue that the origins of EI can be traced to Binet’s early notions of intelligence. Gardner (1993) has postulated that social intelligence consists of a person’s inter- and intra personal intelligences. Still, EI was not truly popularized until the recent renaissance of the dispositional approach in the workplace (cf. Hough & Ones, 2001). The differing names given to emotional intelligence are part of the reason that it has been difficult for researchers to agree on an all-encompassing definition. Emotional intelligence has also been referred to as emotional literacy, the emotional quotient, personal intelligence, social intelligence, and interpersonal intelligence (Dulewicz & Higgs, 2000). The definitions are so varied, and the field is growing so rapidly, that researchers are constantly amending even their own definitions of the construct. Nonetheless, although the definitions of EI vary, they tend to be complementary rather than contradictory (*Ciarrochi, Chan, & Caputi, 2000). Based on the many definitions that have already been proffered, this article conceptualizes EI as the set of abilities (verbal and nonverbal) that enable a person to generate, recognize, express, understand, and evaluate their own, and others, emotions in order to guide thinking and action that successfully cope with environmental demands and pressures.