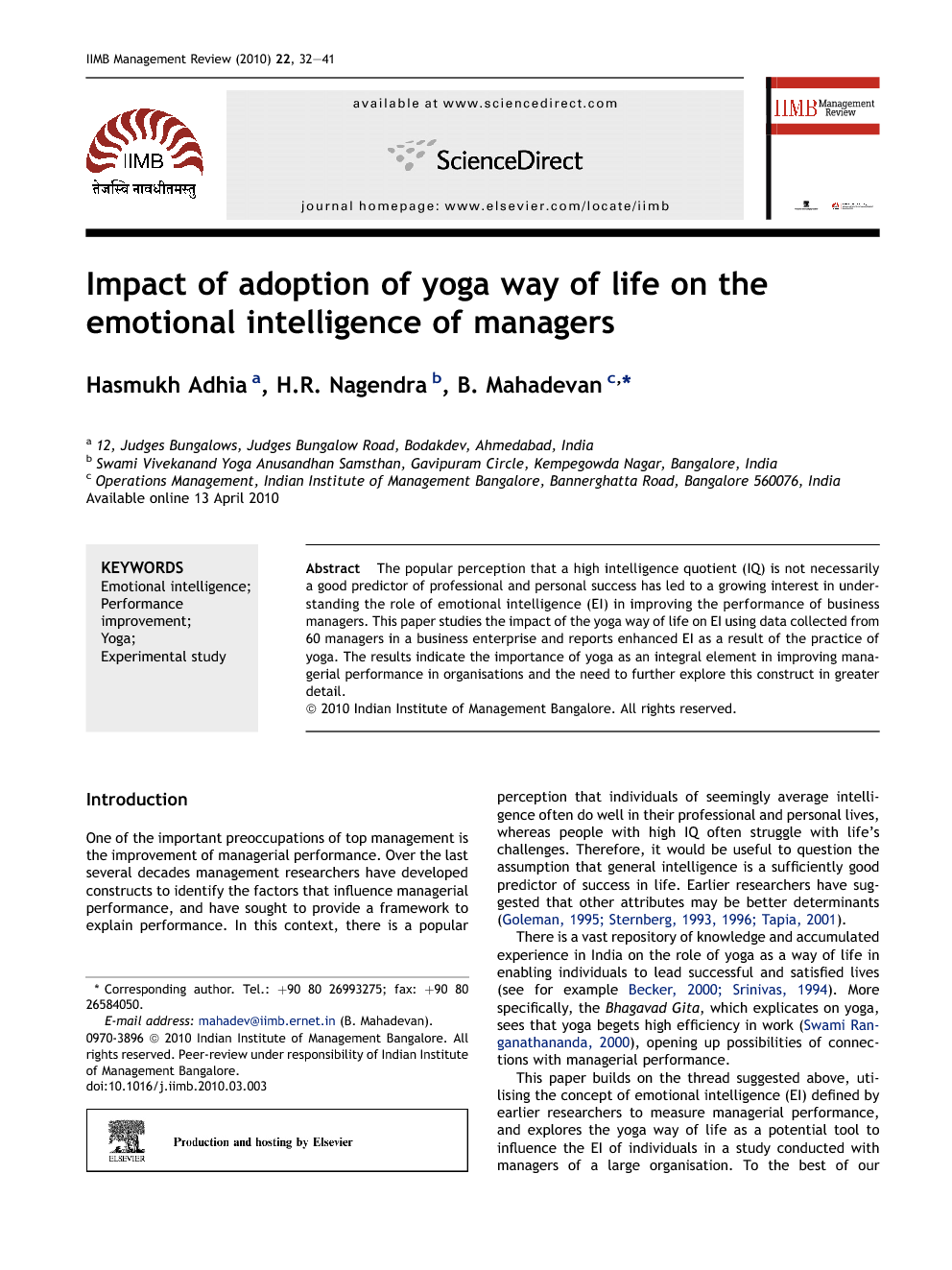 The popular perception that a high intelligence quotient (IQ) is not necessarily a good predictor of professional and personal success has led to a growing interest in understanding the role of emotional intelligence (EI) in improving the performance of business managers. This paper studies the impact of the yoga way of life on EI using data collected from 60 managers in a business enterprise and reports enhanced EI as a result of the practice of yoga. The results indicate the importance of yoga as an integral element in improving managerial performance in organisations and the need to further explore this construct in greater detail.

One of the important preoccupations of top management is the improvement of managerial performance. Over the last several decades management researchers have developed constructs to identify the factors that influence managerial performance, and have sought to provide a framework to explain performance. In this context, there is a popular perception that individuals of seemingly average intelligence often do well in their professional and personal lives, whereas people with high IQ often struggle with life’s challenges. Therefore, it would be useful to question the assumption that general intelligence is a sufficiently good predictor of success in life. Earlier researchers have suggested that other attributes may be better determinants (Goleman, 1995, Sternberg, 1993, Sternberg, 1996 and Tapia, 2001). There is a vast repository of knowledge and accumulated experience in India on the role of yoga as a way of life in enabling individuals to lead successful and satisfied lives (see for example Becker, 2000 and Srinivas, 1994). More specifically, the Bhagavad Gita, which explicates on yoga, sees that yoga begets high efficiency in work (Swami Ranganathananda, 2000), opening up possibilities of connections with managerial performance. This paper builds on the thread suggested above, utilising the concept of emotional intelligence (EI) defined by earlier researchers to measure managerial performance, and explores the yoga way of life as a potential tool to influence the EI of individuals in a study conducted with managers of a large organisation. To the best of our knowledge there has been no previous attempt in this direction. The paper is organised as follows: In the next section we introduce the concept of EI and motivate the use of this construct by discussing the key findings from earlier research. An introduction to the yoga way of life and its usefulness in improving EI in particular, and managerial performance and satisfaction levels in general follows in the next section. The details of the empirical work carried out as part of this study, and the results, key findings, and their implications are discussed in the later sections. Our study suggests that the yoga way of life could be a potential contributor to improving the performance of managers, and improving their satisfaction levels. Although the results are based on a single study with a sample of 60 managers from one enterprise, the results are encouraging. Our study motivates further research into this aspect in multiple settings, and the generalisation of the results obtained in the study.

Our study has been successful in establishing the usefulness of the yoga framework for the enhancement of the emotional intelligence of an employee. However, the key to success lies in giving employees total knowledge of yoga—both theory and practice—in a systematic manner. If the trainer himself is not perfect, the results may vary. Moreover in the current study we have not attempted to analyse whether the age profile has an impact. Conducting a larger study with separate samples for various age profiles may give more insights. The results obtained in this study point to the need to conduct similar experiments in other organisational settings and with a larger sample size. As in the case of similar experiments, different instruments for measuring EI may be tried in place of the self-report format used here, so that the social desirability angle may also be accounted for. It would also be useful to study dimensions such as the extent of ‘burn out’ of the positive effects of the yoga way of life through longitudinal studies of EI and EC. The study also opens up debates on some of the larger issues related to the theme of yoga, managerial effectiveness and the use of statistical tools in empirical study. At a philosophical level, the yoga way of life seeks to unite the individual consciousness with universal consciousness. At the empirical level, the efficacy of scientific scrutiny needs to be tested by conducting more studies. Also it may call for handling more qualitative data and experiential data than quantitative data. Developing better research methodologies to handle these unique aspects is another area that may require further work in the future.