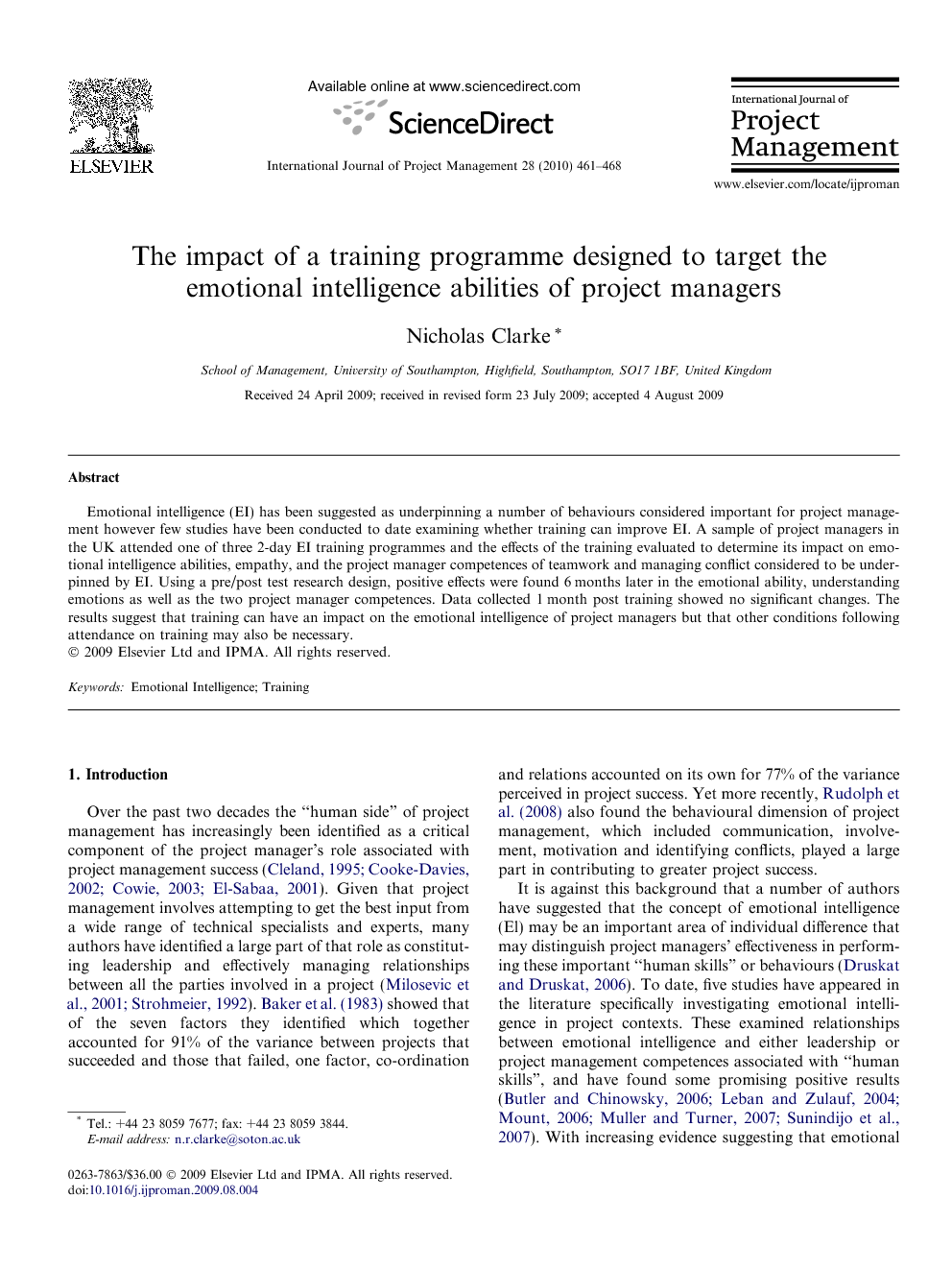 This is the first study to appear in the literature that has investigated whether participation in a short training programme can affect the development of emotional intelligence abilities in project managers. The study found that participation in a 2-day training programme resulted in statistically significant improvements in one of the emotional intelligence abilities tested, the ability to understand emotions. Importantly this positive change was not found immediately following training (1 month later) but was found 6 months post training. The results indicate then, that the impact of training on this ability is unlikely to be seen immediately, requiring some months before any improvements can be detected. This would seem to suggest that although training can provide an initial self-awareness of the importance of emotions, the actual processes associated with the development of this emotional intelligence ability continue taking place after training has taken place, possibly through on-the-job learning mechanisms. This would seem to correspond with other studies that have found developments in ability-derived measures of EI within team learning contexts (C1arke, 2007, Groves et al., 2008 and Moriarty and Buckley, 2003). However the limitations associated with the research design suggest that any conclusions should only be treated as tentative at this stage. The evaluation was based on a study comprising of a sample of only 53 participants. Although such sample sizes are commonly found within the training evaluation literature (Cromwell and Kolb, 2004 and Lim and Morris, 2006) they do nonetheless pose problems with increasing dangers of type I errors (i.e. finding a positive result when in fact the reverse is true). The absence of a suitable comparison group also means that maturational factors cannot be ruled out as accounting for the positive results found. The use of self-ratings to assess project management competences is a further major limitation of the study given that self ratings are generally far more lenient than those from observers (Atwater and Yammarino, 1992). A further problem concerned the significant participant attrition that was encountered particularly at 1 month post training (Time 2). This resulted in a smaller subset of data available for analyzing whether there had been in any change in trainees’ emotional intelligence abilities 1 month immediately following training. It could be that the reduced sample here resulted in the failure to find any positive effects at this time point. Future studies should therefore aim to replicate this study involving larger populations and using more objective measures of project manager competences. Given criticisms that much training for project management has tended to overly focus on the technical and planning aspects of project management, potential gains in a wide range of key project management areas could well be achieved through the additional programmes described here.