عنوان انگلیسی
The relationship between cultural intelligence and performance with the mediating effect of culture shock: A case from Philippine laborers in Taiwan
دانلود فوری مقاله + سفارش ترجمه 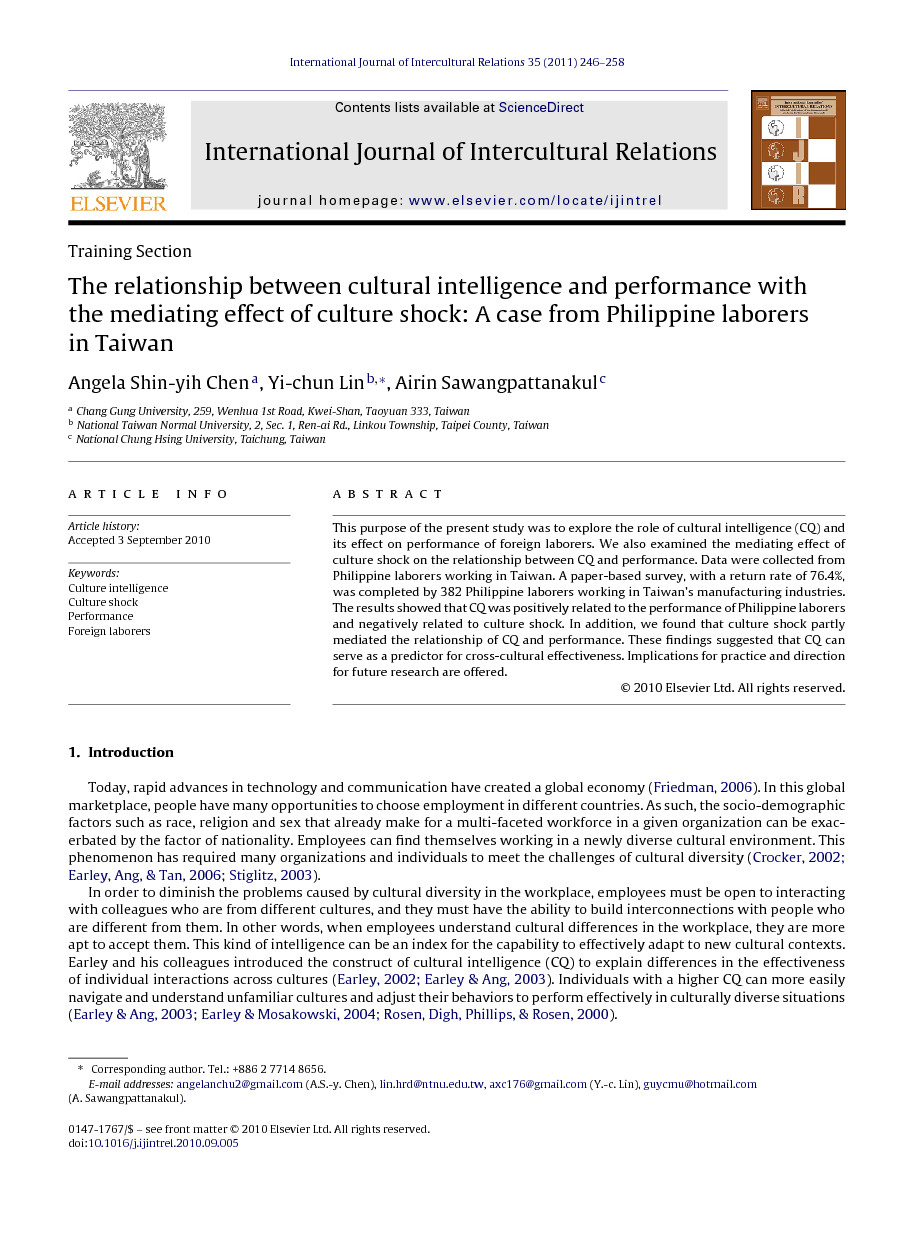 This purpose of the present study was to explore the role of cultural intelligence (CQ) and its effect on performance of foreign laborers. We also examined the mediating effect of culture shock on the relationship between CQ and performance. Data were collected from Philippine laborers working in Taiwan. A paper-based survey, with a return rate of 76.4%, was completed by 382 Philippine laborers working in Taiwan's manufacturing industries. The results showed that CQ was positively related to the performance of Philippine laborers and negatively related to culture shock. In addition, we found that culture shock partly mediated the relationship of CQ and performance. These findings suggested that CQ can serve as a predictor for cross-cultural effectiveness. Implications for practice and direction for future research are offered.

Today, rapid advances in technology and communication have created a global economy (Friedman, 2006). In this global marketplace, people have many opportunities to choose employment in different countries. As such, the socio-demographic factors such as race, religion and sex that already make for a multi-faceted workforce in a given organization can be exacerbated by the factor of nationality. Employees can find themselves working in a newly diverse cultural environment. This phenomenon has required many organizations and individuals to meet the challenges of cultural diversity (Crocker, 2002, Earley et al., 2006 and Stiglitz, 2003). In order to diminish the problems caused by cultural diversity in the workplace, employees must be open to interacting with colleagues who are from different cultures, and they must have the ability to build interconnections with people who are different from them. In other words, when employees understand cultural differences in the workplace, they are more apt to accept them. This kind of intelligence can be an index for the capability to effectively adapt to new cultural contexts. Earley and his colleagues introduced the construct of cultural intelligence (CQ) to explain differences in the effectiveness of individual interactions across cultures (Earley, 2002 and Earley and Ang, 2003). Individuals with a higher CQ can more easily navigate and understand unfamiliar cultures and adjust their behaviors to perform effectively in culturally diverse situations (Earley and Ang, 2003, Earley and Mosakowski, 2004 and Rosen et al., 2000). However, not everyone has the intelligence to adjust effectively in a cross-cultural workplace. Extensive research has shown that 16–70% of expatriate assignments end in failure. Most expatriates suffer from problems of adjustment and culture shock (Black and Gregersen, 1999, Black et al., 1999, Black et al., 1991, Naumann, 1992 and Rose et al., 2008). These problems cause uncertain feelings, personal and professional stress, frustration and confusion, and result in differences in behavioral expectations (Black and Gregersen, 1991a and Black and Gregersen, 1991b). These problems occur not only among international expatriates, but also among foreign laborers. Increasingly, foreign laborers are being hired to work in the global marketplace. They move from country to country to fill the demand for labor. In most countries, the labor workforce is becoming increasingly heterogeneous. As with expatriates, these workers face intercultural problems in their daily life as well as on the job. Taiwan provides a good example. Taiwan is one of the countries that has opened its labor market in order to solve the problem of a labor shortage, particularly in its manufacturing and construction industry sectors since 1992 (CLA, 2002 and Lan, 2003). In May 2010, there were a total of 364,789 foreign laborers in Taiwan. The majority of foreign laborers in Taiwan are from Southeast Asian countries such as Indonesia (147,723 workers), Vietnam (78,875 workers), the Philippines (75,668 workers), and Thailand (62,512 workers)2. Among those foreign laborers in Taiwan, Philippines laborers have a higher proportion of workers who are older and have college degrees, and most are employed in Taiwan's manufactory industry (Lan, 2003). Foreign laborers in Taiwan suffer many on-the-job problems: missing work time with no excuses, performing their jobs at a much slower pace than normal, neglecting orders by managers, misconduct, and low morale. Those kinds of behaviors have strong impact on their performance. In a paper by Tsai and Yu (1998), foreign laborers perceived that such behaviors had an influence on their productivity and created conflicts with employers and fellow employees. If foreign laborers gain an appreciation for cultures different from their own, then they could possibly solve these problems easily, decrease their culture shock and avoid the chances for conflict with employers and fellow employees when they work in a different country or culture. Hence, cultural shock is viewed as fundamental, and expatriates or foreign laborers must somehow overcome the social and psychological differences between his or her own cultural perceptions and those of the new environment in order to interact socially. Culture shock is regarded as a transitional experience and a mechanism to cross-culture effectiveness either in a work setting or a non-work environment in the host country.

The present study makes a valuable contribution to the body of research on intercultural effectiveness. It also contributes to the understanding of intercultural relations research in several ways. First, the concept of CQ has been theorized and constructed by Earley and Ang (2003) and would seem to be the best available consensus statement to predict other intercultural variables. The present study has demonstrated that CQ can serve as a predictor for one's performance in a cross-cultural situation. We also explored the fact that CQ is a key element affecting other cultural factors such as culture shock. Culture shock occurred sometimes due to an inability to understand local customs, social interactions, and local language. When the psychological barriers can be overcome, individuals can rapidly adjust to a new environment and can increase cross-cultural adaptability. Second, this study offers important implications for practice. It is clear to managers and organizations that they should recognize the importance of employees’ intelligence in adapting cultural differences and a diverse environment; in particular, this is unavoidable in today's global workplace. In addition, managers and organizations should encourage their employees to interact with people from different cultures and should motivate employees’ desire to learn about diverse cultures. The misunderstandings, or stress, created by a different culture can be reduced. Last, as a specific implication for manpower agencies and organizations, one of the results we found in the present study was that in some cases non-native language ability can cause poor work performance and high culture shock among foreign laborers. Therefore, it should be noted that some overseas employees with better local knowledge and language abilities, may more easily sense unfair treatment or discrimination from managers or local people, and thereby develop a negative attitude and negative behavior at work (Ensher et al., 2001). So, managers should find appropriate ways to solve employees’ dissatisfaction and treat them equally in the workplace. Due to the present study's data collection, measurement, and sample characteristics, we must acknowledge that this study has several limitations. First, our data was gathered from a self-reported questionnaire, so it might have a common method bias (CMV) problem. The instrument was designed using a 5-point or 7-point scale in different variable measurements to minimize the CMV problems (Crampton and Wagner, 1994 and Podsakoff et al., 2003). Second, due to the limited time and resources, it was not feasible to conduct a random sampling. Therefore, we had to use a purposeful sampling to collect our data, which could have limited the generalization of our results. Third, only a group of Philippine laborers was used as the sample in the present study. Other foreign laborers who are allowed to legally work in Taiwan, such as Thai, Indonesian, and Vietnamese, were not included in this study. Therefore, it is difficult to generalize the actual situation for all foreign laborers in Taiwan. The final limitation was that most Philippine laborers are hired to work in the manufacturing industry. Philippine laborers who work in other kinds of industries in Taiwan are not easily found. With respect to the above limitations, we recommend future research to extend the present study into the sectors of other industries such as the construction industry and healthcare service as well as workers from different nationalities such as Thai, Vietnamese and Indonesian. In addition, future research should include all levels of foreign employees to increase the generalization of results.