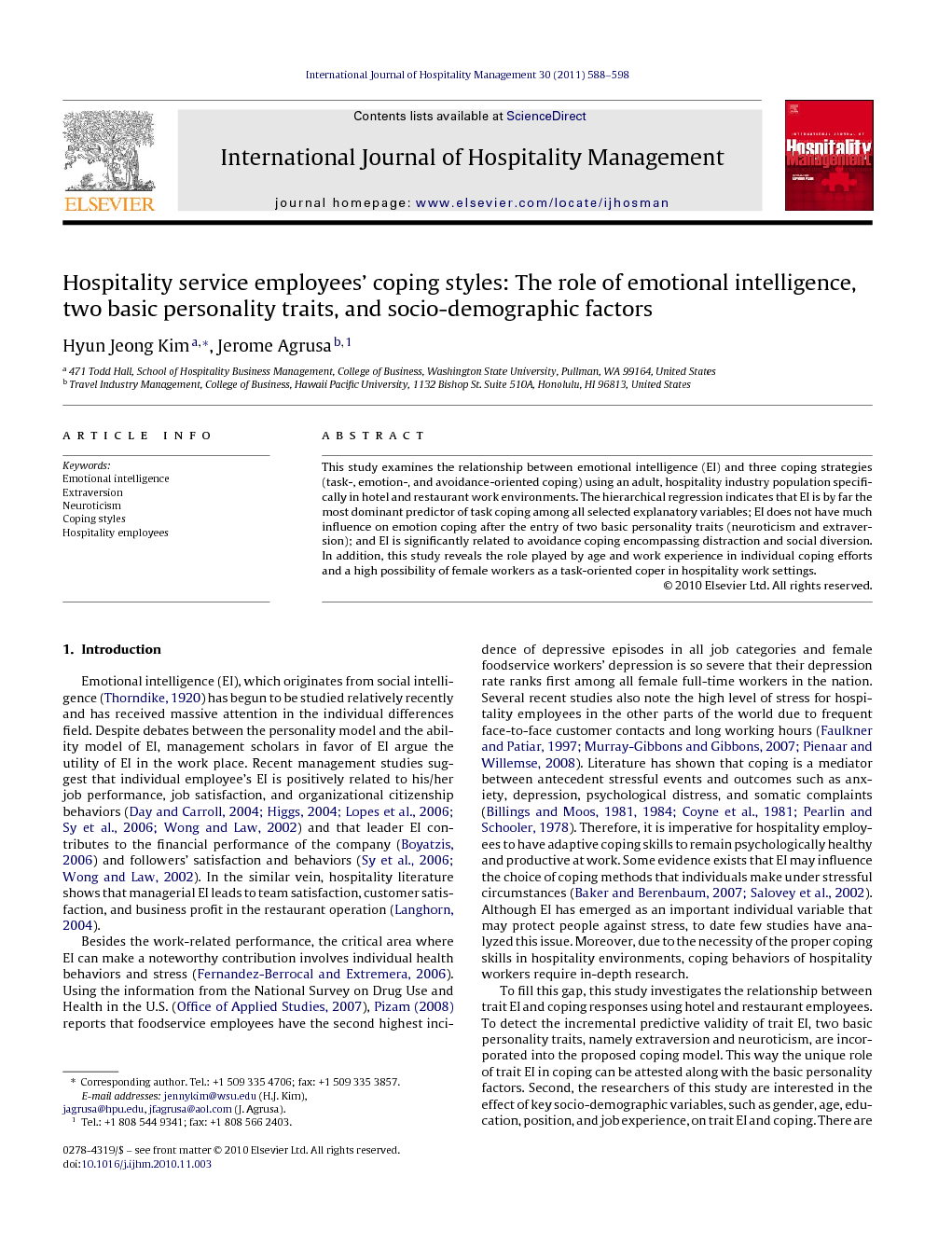 This study examines the relationship between emotional intelligence (EI) and three coping strategies (task-, emotion-, and avoidance-oriented coping) using an adult, hospitality industry population specifically in hotel and restaurant work environments. The hierarchical regression indicates that EI is by far the most dominant predictor of task coping among all selected explanatory variables; EI does not have much influence on emotion coping after the entry of two basic personality traits (neuroticism and extraversion); and EI is significantly related to avoidance coping encompassing distraction and social diversion. In addition, this study reveals the role played by age and work experience in individual coping efforts and a high possibility of female workers as a task-oriented coper in hospitality work settings.

Emotional intelligence (EI), which originates from social intelligence (Thorndike, 1920) has begun to be studied relatively recently and has received massive attention in the individual differences field. Despite debates between the personality model and the ability model of EI, management scholars in favor of EI argue the utility of EI in the work place. Recent management studies suggest that individual employee's EI is positively related to his/her job performance, job satisfaction, and organizational citizenship behaviors (Day and Carroll, 2004, Higgs, 2004, Lopes et al., 2006, Sy et al., 2006 and Wong and Law, 2002) and that leader EI contributes to the financial performance of the company (Boyatzis, 2006) and followers’ satisfaction and behaviors (Sy et al., 2006 and Wong and Law, 2002). In the similar vein, hospitality literature shows that managerial EI leads to team satisfaction, customer satisfaction, and business profit in the restaurant operation (Langhorn, 2004). Besides the work-related performance, the critical area where EI can make a noteworthy contribution involves individual health behaviors and stress (Fernandez-Berrocal and Extremera, 2006). Using the information from the National Survey on Drug Use and Health in the U.S. (Office of Applied Studies, 2007), Pizam (2008) reports that foodservice employees have the second highest incidence of depressive episodes in all job categories and female foodservice workers’ depression is so severe that their depression rate ranks first among all female full-time workers in the nation. Several recent studies also note the high level of stress for hospitality employees in the other parts of the world due to frequent face-to-face customer contacts and long working hours (Faulkner and Patiar, 1997, Murray-Gibbons and Gibbons, 2007 and Pienaar and Willemse, 2008). Literature has shown that coping is a mediator between antecedent stressful events and outcomes such as anxiety, depression, psychological distress, and somatic complaints (Billings and Moos, 1981, Billings and Moos, 1984, Coyne et al., 1981 and Pearlin and Schooler, 1978). Therefore, it is imperative for hospitality employees to have adaptive coping skills to remain psychologically healthy and productive at work. Some evidence exists that EI may influence the choice of coping methods that individuals make under stressful circumstances (Baker and Berenbaum, 2007 and Salovey et al., 2002). Although EI has emerged as an important individual variable that may protect people against stress, to date few studies have analyzed this issue. Moreover, due to the necessity of the proper coping skills in hospitality environments, coping behaviors of hospitality workers require in-depth research. To fill this gap, this study investigates the relationship between trait EI and coping responses using hotel and restaurant employees. To detect the incremental predictive validity of trait EI, two basic personality traits, namely extraversion and neuroticism, are incorporated into the proposed coping model. This way the unique role of trait EI in coping can be attested along with the basic personality factors. Second, the researchers of this study are interested in the effect of key socio-demographic variables, such as gender, age, education, position, and job experience, on trait EI and coping. There are limited findings on this fundamental query in hospitality academia whereas the information is abundant in other disciplines (Brackett et al., 2004, Ciarrochi et al., 2000, Endler and Parker, 1994, Mayer et al., 1999 and Feifel and Strack, 1989). The reminder of this paper is organized as follows: Section 2 introduces the theoretical background of EI and coping to formulate a series of study hypotheses; Section 3 describes the data collection procedure and instruments; statistical test results and major findings are discussed in Sections 4 and 5, respectively; Section 6 provides summary and future research directions; and Section 7 concludes the paper with managerial implications for hospitality operators.