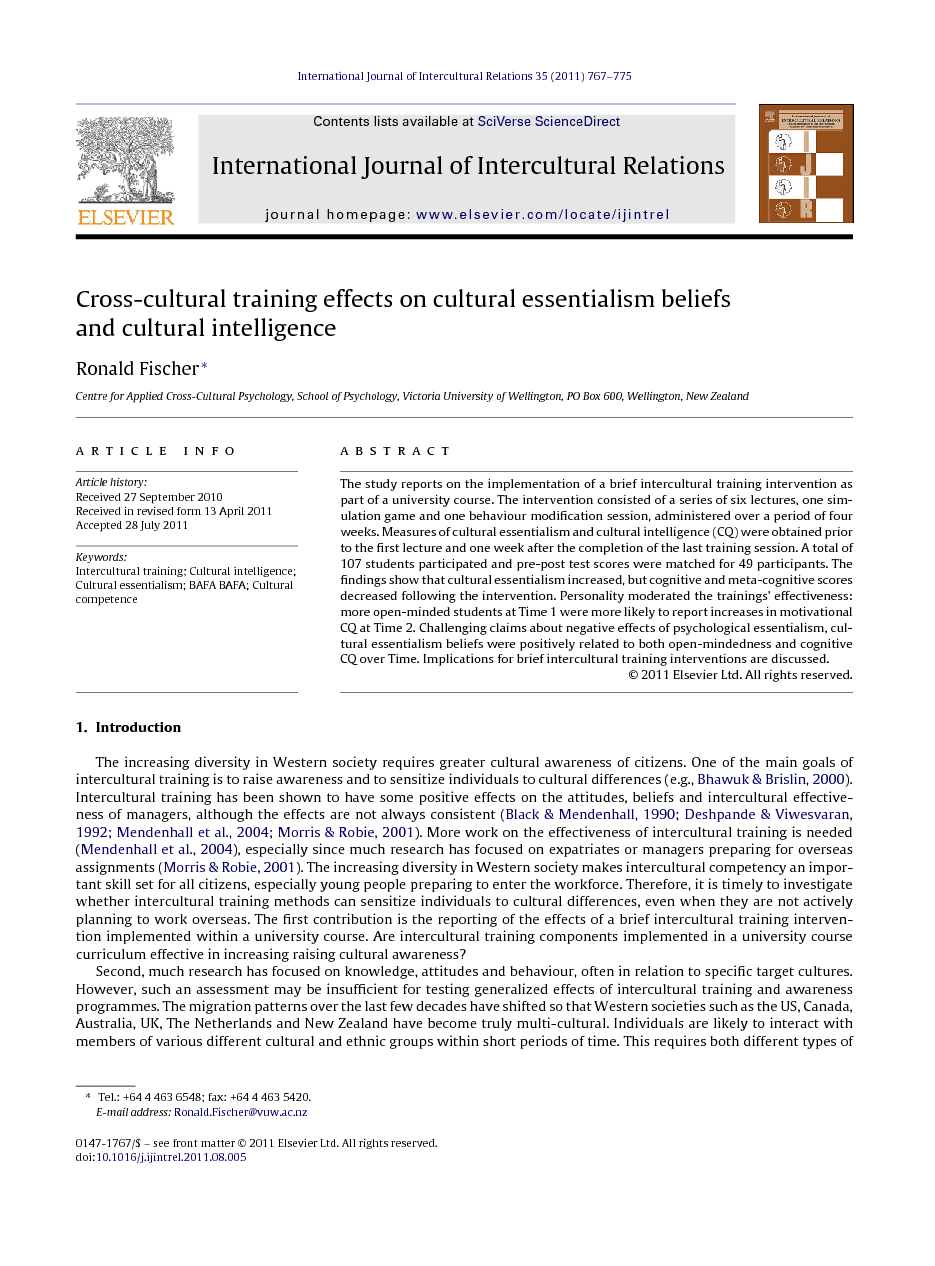 The study reports on the implementation of a brief intercultural training intervention as part of a university course. The intervention consisted of a series of six lectures, one simulation game and one behaviour modification session, administered over a period of four weeks. Measures of cultural essentialism and cultural intelligence (CQ) were obtained prior to the first lecture and one week after the completion of the last training session. A total of 107 students participated and pre-post test scores were matched for 49 participants. The findings show that cultural essentialism increased, but cognitive and meta-cognitive scores decreased following the intervention. Personality moderated the trainings’ effectiveness: more open-minded students at Time 1 were more likely to report increases in motivational CQ at Time 2. Challenging claims about negative effects of psychological essentialism, cultural essentialism beliefs were positively related to both open-mindedness and cognitive CQ over Time. Implications for brief intercultural training interventions are discussed.

The increasing diversity in Western society requires greater cultural awareness of citizens. One of the main goals of intercultural training is to raise awareness and to sensitize individuals to cultural differences (e.g., Bhawuk & Brislin, 2000). Intercultural training has been shown to have some positive effects on the attitudes, beliefs and intercultural effectiveness of managers, although the effects are not always consistent (Black and Mendenhall, 1990, Deshpande and Viwesvaran, 1992, Mendenhall et al., 2004 and Morris and Robie, 2001). More work on the effectiveness of intercultural training is needed (Mendenhall et al., 2004), especially since much research has focused on expatriates or managers preparing for overseas assignments (Morris & Robie, 2001). The increasing diversity in Western society makes intercultural competency an important skill set for all citizens, especially young people preparing to enter the workforce. Therefore, it is timely to investigate whether intercultural training methods can sensitize individuals to cultural differences, even when they are not actively planning to work overseas. The first contribution is the reporting of the effects of a brief intercultural training intervention implemented within a university course. Are intercultural training components implemented in a university course curriculum effective in increasing raising cultural awareness? Second, much research has focused on knowledge, attitudes and behaviour, often in relation to specific target cultures. However, such an assessment may be insufficient for testing generalized effects of intercultural training and awareness programmes. The migration patterns over the last few decades have shifted so that Western societies such as the US, Canada, Australia, UK, The Netherlands and New Zealand have become truly multi-cultural. Individuals are likely to interact with members of various different cultural and ethnic groups within short periods of time. This requires both different types of skills and a broader assessment of programme effectiveness, focusing on general abilities and beliefs about culture (Earley & Peterson, 2004). Here, I focus on two such variables, namely essentialist beliefs about culture (whether cultures are seen as having some underlying essence that influences how members of a culture behave, see Fischer & Tilyard, submitted for publication) and cultural intelligence (Ang & van Dyne, 2008). These variables are not specific to any particular culture but capture general beliefs and self-reported abilities about culture and cultural sensitivity. Third, intercultural training has focused on the effectiveness of various training methods. Less attention has been paid to effects of individual differences in training receptiveness (Mendenhall et al., 2004). In particular, the extent to which individuals are open-minded towards other cultures may strongly influence how people react to intercultural awareness training. Open-minded individuals are more likely to be creative, show higher training performance and are more likely to become entrepreneurs (e.g., Baer, 2010, Lievens et al., 2003 and Zhao and Seibert, 2006). Here, I am testing whether open-mindedness as a personality variable affects training effectiveness.

Brief intercultural training interventions embedded as a module within a university course can help to sensitize students to cultural differences. A series of lectures and two training sessions involving a simulation exercise and a brief behaviour-modification training increased levels of cultural essentialism, but also raised awareness about cultural knowledge limits, leading to a drop in self-rated cognitive and meta-cognitive CQ. Participants probably moved from unconscious to conscious incompetence which can be seen as a first step in increasing intercultural awareness. Furthermore, personality moderated the effectiveness of the course intervention. Open-minded students were more positively affected by the intervention and increased their level of motivational CQ. Therefore, the course intervention was partially successful, especially for more open-minded personalities. The study also demonstrated cultural essentialism can have positive relationships with desirable psychological constructs such as open-mindedness and cognitive CQ, challenging claims that essentialism is consistently linked to prejudice and negative outcomes. Essentialist beliefs about culture may have some functional value for individuals to help them make sense of puzzling intercultural interactions.